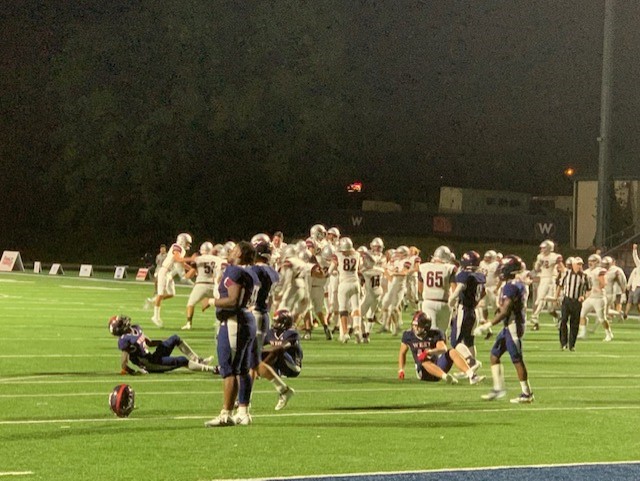 KNOXVILLE – Alcoa was coming off a narrow 30-27 loss to Class 6A #2 Maryville when the Tornadoes took their talents to Knoxville on Friday night to face the Class 5A #1 West Rebels and it was a classic.

Alcoa was able to penetrate deep into West territory three times in the first half, but the West defense turned the Tornadoes away on fourth down all three times with Alcoa coming up empty in the red zone.

The Tornadoes would finally break through with three seconds left before halftime on a 3-yard touchdown pass from Caden Buckles to Major Newman, giving Alcoa a 7-0 halftime lead.

The score remained 7-0, in favor of the Tornadoes after three quarters, as Alcoa accumulated 79 penalty yards in the period, killing several promising drives.

West was able to tie the game at 7-7 with just over nine minutes left in the game on a 5-yard touchdown pass from Carson Jessie to Brayden Latham.

Alcoa once again penetrated deep into Rebel territory with a 16-play, 58-yard drive, but a Buckles pass intended for Isaiah Bryant on 4th-and-15 fell incomplete, giving West the ball at its own 28-yard line with 53 seconds remaining. The Rebels ran out the clock and played for overtime, hoping not to make a costly mistake in the waning seconds.

At one point during Alcoa’s final drive, the Tornadoes found themselves facing a 1st-and-49 from their own 32-yard line after a holding penalty, followed by a personal foul penalty.

West won the toss and put the Tornadoes on offense first in the initial overtime period. Buckles found Newman for the duo’s second scoring hook-up of the night on a 9-yard touchdown pass that was tipped by a Rebels defender. Alcoa led 14-7 and the Rebels would need at least a touchdown and extra-point to match.

Alcoa’s Major Newman hauls in a pass that was tipped by a West defender to give Alcoa a 14-7 lead in the first overtime period. Photo by Brian Hamilton

It appeared that West would be its own worst enemy in their overtime possession, as the Rebels committed numerous penalties that forced them into a 4th-and-26. Jessie tossed a pass into solid Alcoa coverage, which looked as if it would fall to the turf, preserving the win for the Tornadoes.

However, Rebels’ receiver Jaqurrius Wrenn just so happened to be in the right place at the right time, with the ball falling into his hands, as he ran untouched into the end zone for a touchdown. The extra-point attempt was good, sending the game to a second overtime at 14-14.

West would get the ball first in the second overtime session and Brayden Latham scored on a 10-yard touchdown run on the first play. However, the extra-point attempt was blocked, leaving the Rebels with a 20-14 lead.

Alcoa faced a 4th-and-goal from the 7-yard line in the second overtime and at that point, it was all or nothing. Quarterback Caden Buckles took the snap from the shotgun and rolled hard right, however, with most of the West defense committing to the right side of the formation, it appeared that running back Elijah Cannon was coming open in the flat.

Buckles then threw across the field to Cannon, who walked into the end zone untouched to tie the game at 20-20.

“We practice it every day and it has to be perfect,” Cannon said of the final play call. “When I was coming off the line it opened up and everything was wide open. I saw the ball and I was like, ‘you’d better not drop this’. I caught it and scored and that was it.”

After the touchdown, Alcoa still needed the extra-point attempt to be successful to avoid a third overtime period. However, sophomore kicker Bacon Lauderback put the kick through the uprights, giving the Tornadoes the 21-20 win and avoiding back-to-back losses for the first time since 2003.

Alcoa committed 11 penalties for 105 yards during the contest, which was much to Coach Gary Rankin’s chagrin.

“It was embarrassing,” Rankin said. “Those self-inflicted penalties hurt us. It was uncharacteristic and very disappointing. I promise we will get it straightened out or we won’t be playing.”