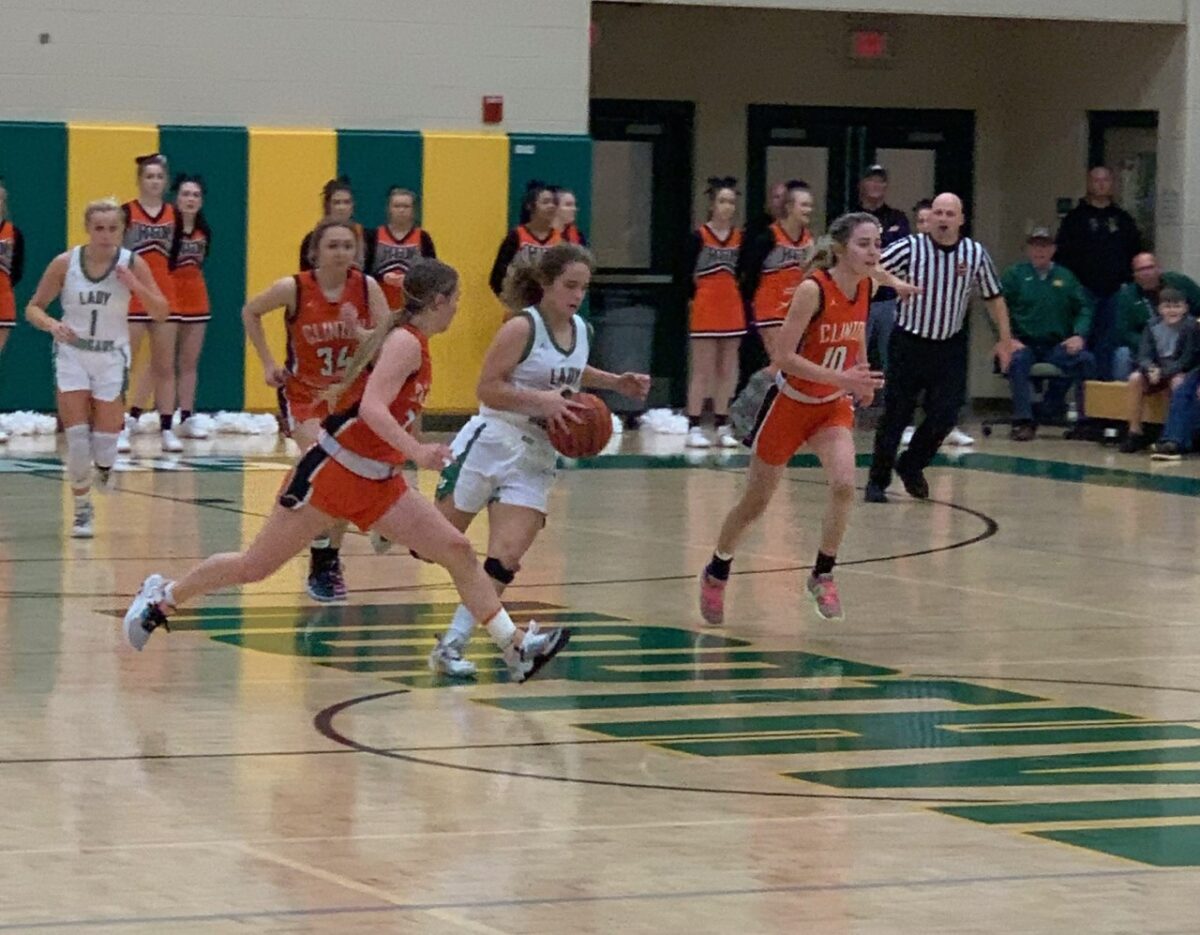 KODAK – On Friday night, Northview Academy had the task of slowing down Tennessee Miss Basketball finalist Sarah Burton and according to Lady Cougars coach Brooke Shelley, it may have been one of the best games they played all year, as Northview never trailed and came away with a 71-57 win.

Northview coach Brooke Shelley talks with her team during a timeout. Photo by Brian Hamilton

“I think it was the best team effort and team win that we’ve ever had, maybe in this program,” Shelley said. “The girls came out and executed the game plan tonight and they stuck to the game plan. Clinton hit some huge shots and we never got rattled. We just stayed focused, and we knocked down free throws at the end when we needed to. We knew that we had to take care of the ball against their pressure. They score a lot of points in transition and a lot of points off turnovers.”

The Lady Cougars took an early 11-3 lead over Clinton before fouling Sarah Burton on a 3-point attempt. The senior would make all three foul shots to cut the Dragon deficit to 11-6.

A three by Sydney Herrell made the score 11-9, but Josie Horner would answer with a basket and a foul on the other end. The sophomore was unable to convert the 3-point play but gave Northview Academy a 13-9 advantage with 2:22 left in the first quarter.

Northview Academy would take a 16-9 lead when Reagan Brown hit a three. A layup by Horner with 20 seconds left gave the Lady Cougars an 18-11 lead after the first quarter.

Savannah Bates made a basket to put the Lady Cougars ahead 27-16, but the Lady Dragons would go on another 6-1 run to close the gap to 28-22.

Josie Horner (24) gets fouled on a layup by Clinton’s Sarah Burton (1) during the Lady Cougars’ 71-57 win. Photo by Brian Hamilton

Two consecutive baskets by senior guard Leny Torres stretched the Northview lead back to double-digits, as the Lady Cougars held a 33-22 lead with 54 seconds left in the half.

Camryn Brown then nailed a three to extend the lead to 36-22, but Clinton’s Ally York made a three in the waning moments of the second quarter, as Northview went to halftime with a 36-25 advantage.

The Lady Cougars continued the onslaught in the second half, as a Torres layup would increase the lead to 51-36 with 2:40 left in the third quarter.

Horner then scored a basket, followed by two free throws for a 55-38 lead with 25 seconds left in the period.

Burton would hit a three right before the buzzer to trim the Northview Academy lead to 55-41, as the Lady Cougars outscored Clinton 19-16 in the third quarter.

Bailey Burroughs opened the fourth quarter with a bucket for the Lady Dragons, followed by a York three, which cut the lead back to single digits, at 57-48.

A floater by Burton cut the Northview lead to 59-51 with 2:01 left in the game, but Horner responded with a fastbreak layup to stretch the lead back to 61-51.

After two Jordan White free throws and a Bates layup, the Lady Cougars found themselves ahead 65-51 with just over a minute remaining. 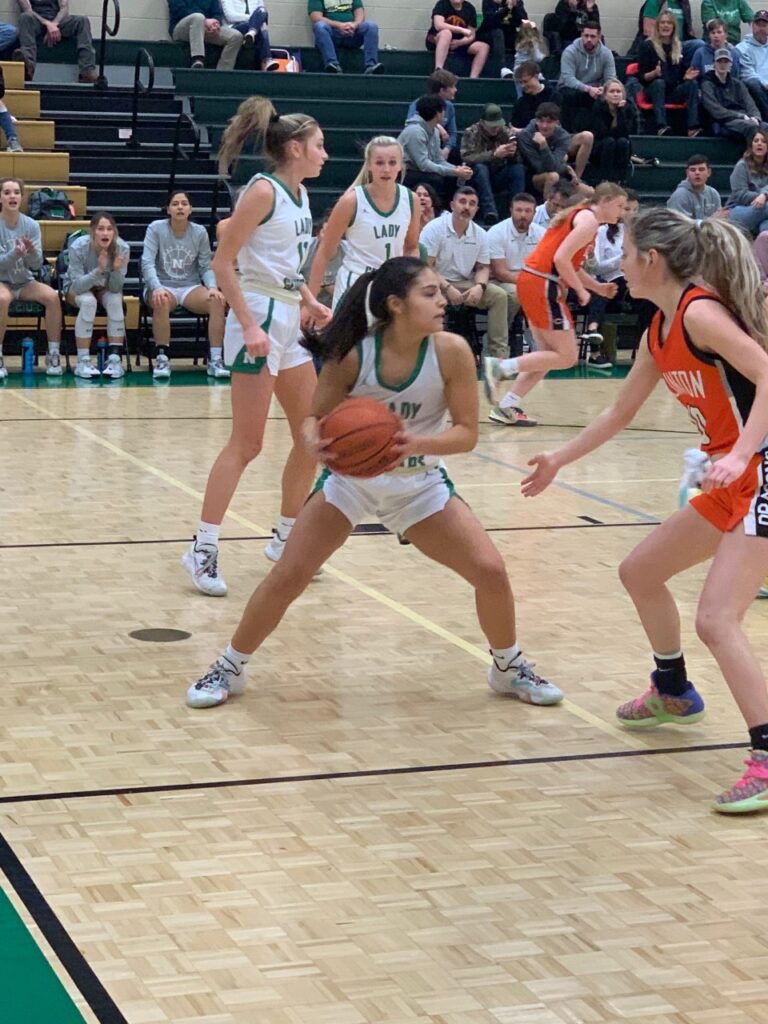 Northview Academy’s Leny Torres looks to head upcourt against the Clinton defense. The senior finished the night with 13 points. Photo by Brian Hamilton

Northview Academy would make free throws down the stretch to salt the game away for a 71-57 win and a berth in the regional semifinals.

Clinton’s Sarah Burton led all scorers with 21 points, while Northview was as balanced as it could be, with all five starters in double-figures.

“We obviously went with a little box-and-one against Burton, which is what pretty much every team does, and she still has 21,” Shelley said. “She’s a Miss Basketball candidate in 3A and I think she’s averaging 25 or 26 points per game, so we knew she was going to get hers. I mean, the kid can just flat-out score, so we knew we had to apply that pressure to her, and Jordan (White) initially had that job and I told her, ‘I don’t care if you score a point tonight, your job is to contain her.'”

Savannah Bates and Josie Horner led the Lady Cougars with 15 points apiece, while Leny Torres and Reagan Brown each finished with 13. Jordan White added 12, including several clutch free throws down the stretch.

“Leny comes out tonight and, I thought, completely led her team,” Shelley said. “She came out, like a senior, saying ‘I’m not ready to be done’. We did a really good job of getting the ball inside tonight. We knew we had a huge advantage in Josie (Horner) with her size. Other players stepped up big and they were knocking down shots.”

Northview Academy (19-12) will travel to Halls on Monday to take on the Red Devils (13-15) in the regional semifinals. Clinton’s season ends with a record of 16-12.