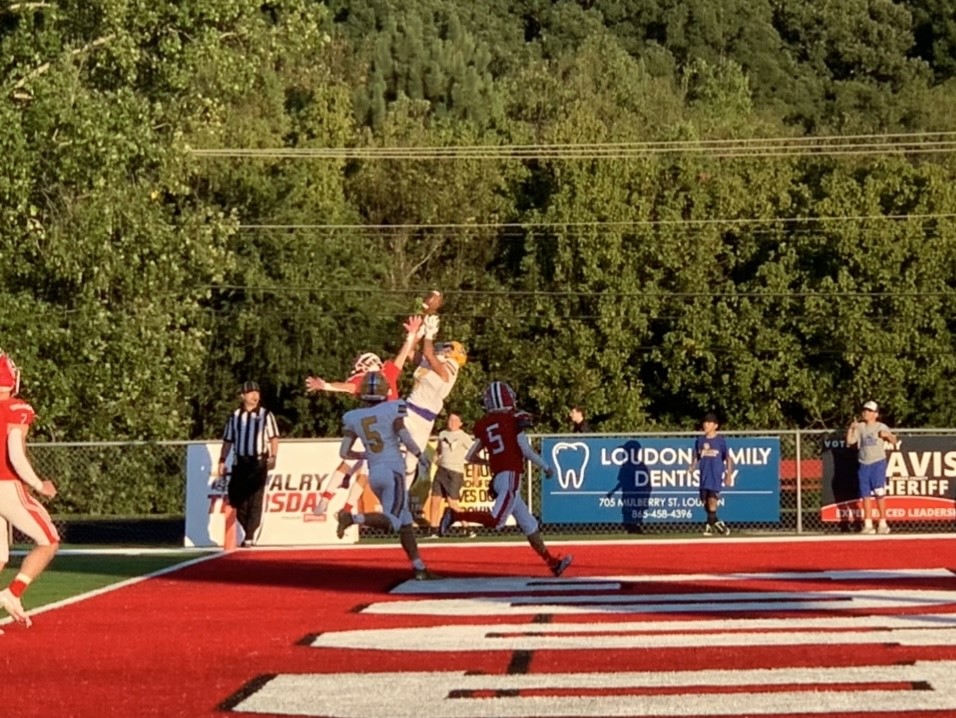 LOUDON – Gatlinburg-Pittman hung tough with Class 3A No.3-ranked Loudon for most of the game, trailing by just one score late in the third quarter, but ultimately mistakes would cost the Highlanders in a 43-22 loss on Thursday Night Rivals.

“The defense played extremely well all night long,” Gatlinburg-Pittman head coach Brad Waggoner said. “We got it into the fourth quarter (almost) at 22-14 and we knew we couldn’t give up big plays at the end. They’ve got explosive players and we knew that coming in.”

Gatlinburg-Pittman took an early 7-0 lead on a 7-yard Levi Hill run and led by a touchdown after one quarter of play.

The Redskins would finally get on the board with 4:12 remaining in the first half when quarterback Keaton Harig connected with Kaden Dockins for a 5-yard touchdown, tying the game at 7-7.

In the second quarter, Gatlinburg-Pittman went for a fake punt, snapping the ball to the up-back, who was quarterback Brady Hammonds. The pass, intended for Reese Cole, was a bit too strong and fell incomplete, turning the ball over to the Redskins in favorable field position.

“We saw that on film and knew we would have a shot at it, but he just overthrew the ball,” Waggoner said. “It is what it is, but in hindsight, when you run a fake punt, you’re always rolling a gamble when you do a fake punt. It’s great if you make it, but if you don’t, it’s not.”

On the ensuing drive, Harig found Jackson Collins for a 20-yard touchdown, giving Loudon a 14-7 lead with 1:58 left until halftime. The Redskins would take a one touchdown lead into the intermission.

Loudon kept gaining momentum early in the third quarter, as Harig tossed his third touchdown pass — this time to Semy Turner — for a 32-yard score. The Redskins would take a 20-7 lead with 10:45 left in the period.

Levi Hill went into the end zone for his second score of the night on a 2-yard run to cut the Highlander deficit to 20-14 with 4:55 remaining in the third quarter.

Levi Hill goes into the end zone during the third quarter to cut the Highlanders’ deficit to 20-14. Photo by Brian Hamilton

On the next Gatlinburg-Pittman possession, penalties pushed the Highlanders back in the shadow of their own end zone and quarterback Hammonds was forced to throw from the back of his own end zone. The pass was incomplete, but Gatlinburg was flagged with a holding call in the end zone, which resulted in a safety and a 22-14 lead for the Redskins.

The Highlanders were moving the ball steadily on their next possession, until Hammonds tossed an interception, setting Loudon up at their own 32-yard line with seconds remaining in the third.

On the next play from scrimmage, Harig hit Dockins on a screen pass, which he took 68 yards to the house, giving the Redskins a 29-14 lead at the end of the third quarter.

“Our kids played really well,” Waggoner said. “We played three quarters of really good defense and I knew we couldn’t give up the big play.”

From that point, things snowballed for the Highlanders, as Harig tossed his fifth touchdown pass on a 9-yard strike to Josh Gonzalez for a 36-14 lead with 8:01 left in the game.

Harig threw his sixth touchdown on the Redskins’ next possession, hitting Braeden Fray for a 27-yard score with 6:45 remaining. Loudon would take a commanding 43-14 lead on the touchdown.

Jacob Ferguson would add a touchdown for Gatlinburg-Pittman on a 7-yard run, cutting the Highlanders’ deficit to 43-22 with 5:04 remaining in the game, which would be the final score.

Gatlinburg-Pittman falls to 1-3 on the season and will host Union County (1-2) next Friday in a Class 3A Region 2 standoff. No. 3 Loudon improves its record to 5-0 after wins over Soddy Daisy, Lenoir City, Sweetwater and Daniel Boone. The Redskins will put its unbeaten record on the line next Friday at Signal Mountain (3-1).