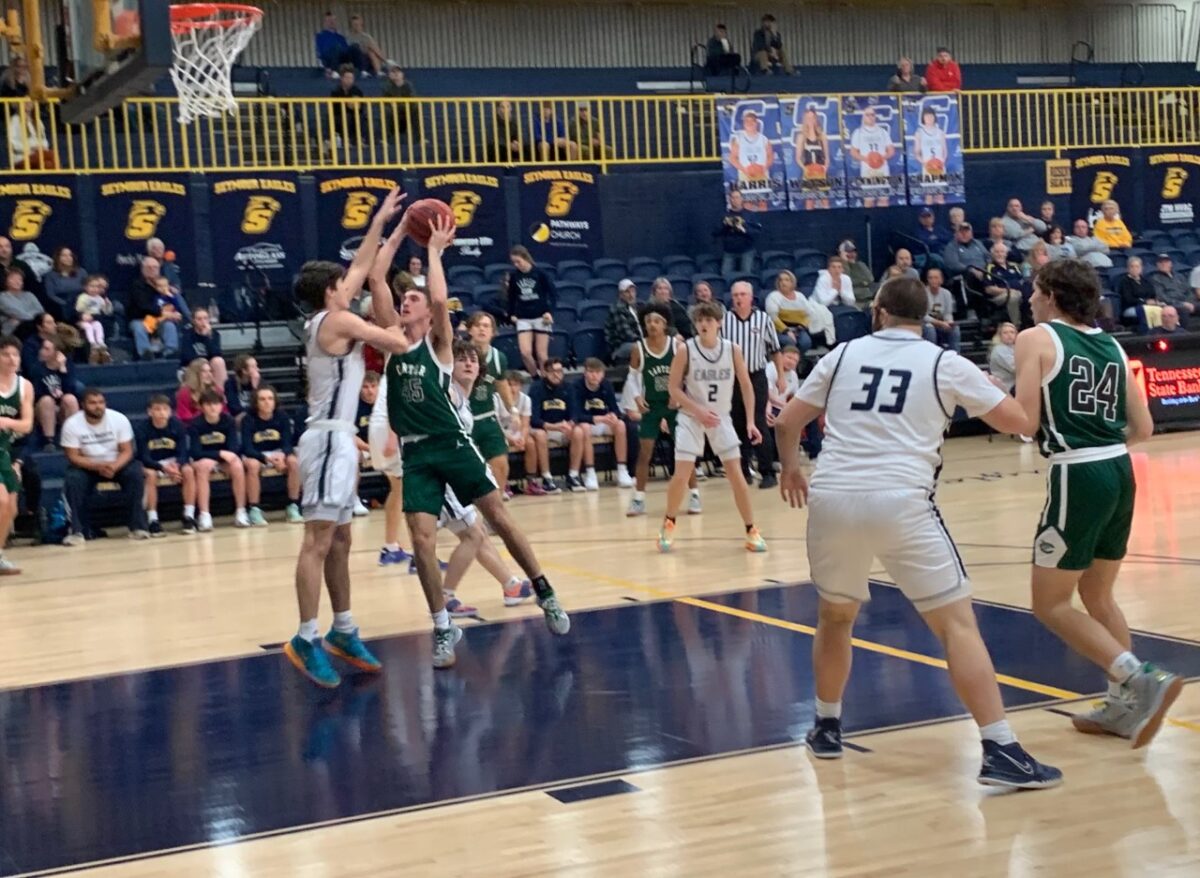 SEYMOUR – Dalton McNew paced Carter early, scoring 16 first quarter points and 23 in the first half, to help guide the Hornets to an 81-47 win over Seymour and a Class 3A District 3 title. 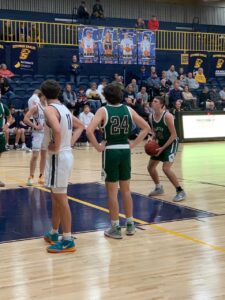 Dylan McNew (45) shoots a free-throw during the first half of Carter’s 81-47 win over Seymour. The junior finished the game with 23 points. Photo by Brian Hamilton

Carter wrapped up its district schedule Monday night with a record of 5-1 with the lone loss coming a week ago at Northview Academy (3-2 District 3).

“It means a lot to win your district, no matter who you are, or what it is,” Carter head coach Tyler Cate said after the game. “It definitely means a lot, but there could always be a bump in the road somewhere.”

McNew went for another layup to cut the Carter deficit to trim the Seymour lead to 6-4 and later hit a free-throw to make the score 6-5. A three by the junior would give McNew an 8-6 lead over the Eagles, as he scored Carter’s first eight points of the game.

Kaleb Harper missed on a basket, then gathered his own rebound and scored to put the Hornets in front 12-6 with 3:04 left in the first. Another McNew three would stretch the lead to 15-6.

McNew made a steal and layup, followed by another driving layup to put Carter in front 19-6 with 45 seconds left in the first quarter, capping a 13-0 Hornets run.

Hilton would finally end Carter’s run with a three, as he scored all of Seymour’s nine points in the first quarter. Another layup and foul by McNew would give the Hornets a 22-9 lead after one quarter. McNew had 16 of Carter’s 22 first quarter points.

A three by Carter’s Wilson Chandler would put the Hornets ahead 25-10 early in the second quarter, followed by a basket by Zane Brown to make the score 27-10.

Seymour’s Connor Hilton (11) goes up for a basket against three Hornet defenders. Photo by Brian Hamilton

Cameron Soulages hit a three-pointer to end the Carter scoring run and make the score 32-13. McNew would answer on the other end, however, extending the Hornets’ lead to 35-13 with 1:44 remaining in the first half.

Another steal and layup by McNew made the score 37-13 with just over a minute left. Brandon Chandler made a pair of free throws with 44 seconds left, as Seymour went to halftime trailing 39-15.

Tanner Sullivan drained to foul shots to make the score 47-26 with 3:27 left in the third quarter, but the Hornets would then go on an 8-1 run to take a 55-27 lead with just over two minutes left in the third.

A three-pointer by Soulages would cut the Carter lead to 55-30 with 1:10 to go, but a pair of baskets by Carter’s Gage Hutchinson and Kejuan Myers would send the Hornets to the fourth quarter with a 59-32 lead. 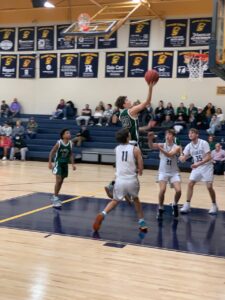 Carter went ahead by 30 — leading 67-37 — with just under six minutes remaining in the game when Seymour’s Bryce Chapman made a bucket to cut the Eagles’ deficit to 28.

Clabough would hit a floater off the glass on the next possession, as Carter went on to win 81-47.

“The kids have bought in 100-percent,” said Cate. “They show up to practice every day and they do what they’re supposed to. They’ve just really met it head on and I couldn’t be more proud of them for it. You never know what bumps are in the road in the future, but if they show up and continue to practice like they do, it’s just going to help them when the going gets tough.”

Dalton McNew finished with a game-high 23 points — all coming in the first half — while Zane Brown and Blake Smith each added nine apiece. Cam Soulages led Seymour with 17, while Connor Hilton finished with 11.