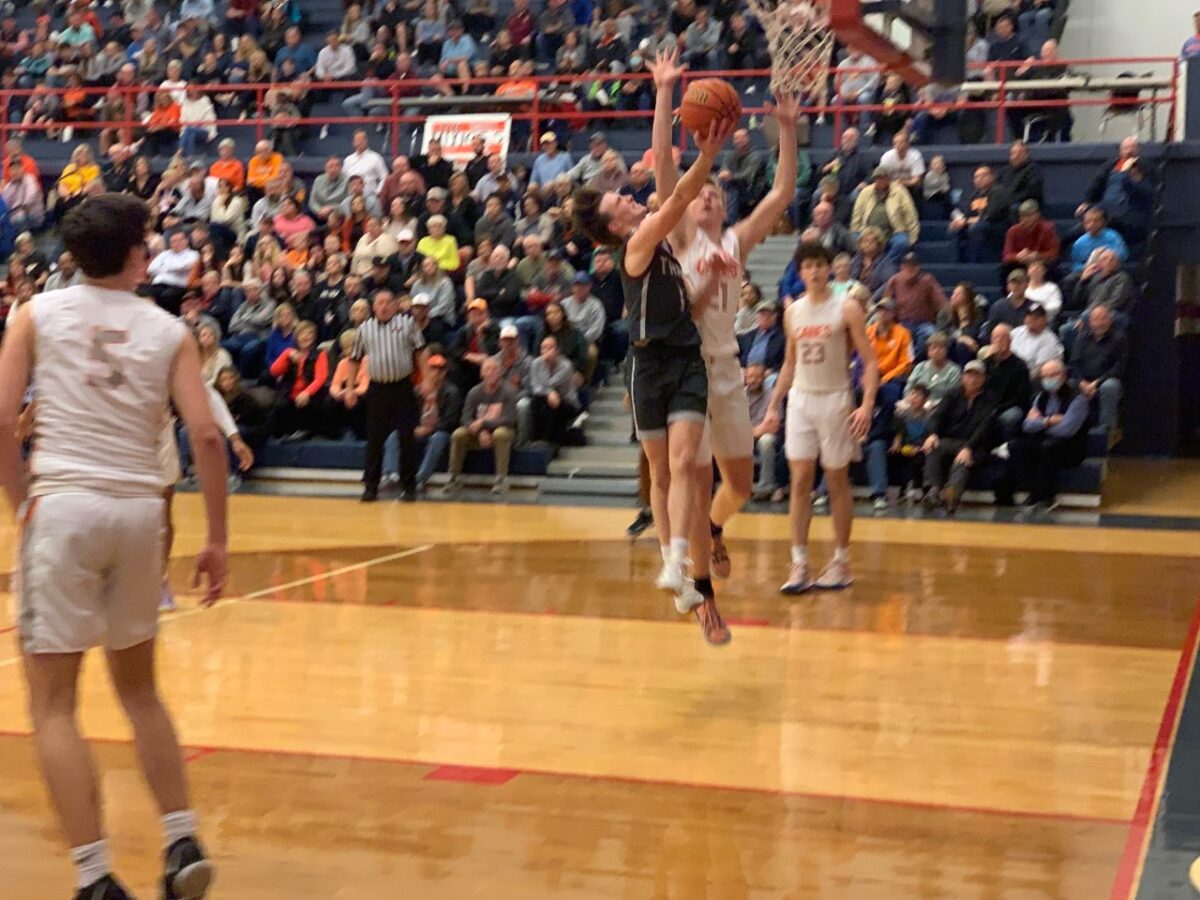 DANDRIDGE – Morristown East saw its best season in school history come to an end on Tuesday night, as a barrage of 3-pointers by Dobyns-Bennett’s Jonavan Gillespie spearheaded a late 10-0 Indian run that was too much for the Hurricanes to overcome.

Morristown East and Micah Simpson rallied furiously late, but ultimately, Dobyns-Bennett would win 59-55 and advance to the region championship.

“Winning is not easy and Dobyns-Bennett has a great team,” Morristown East coach Alden Collins said. “I think so much of the game of basketball is determined by making shots and Gillespie gets off in that fourth quarter and tonight happened to be his night, but the game of basketball comes down to making shots and they made a good run there in the fourth quarter and put enough shots in to stop our run at the end.”

The game began as a rather low scoring affair, but the Hurricanes’ defense and timely baskets kept them in control of the game early.

Morristown East jumped out to an early 7-2 lead before Jack Browder grabbed a rebound and putback to pull Dobyns-Bennett to within 7-4.

A buzzer-beating three by Tyson Frost gave the Hurricanes a 10-4 lead at the end of the first quarter.

The Indians pulled to within 10-6 early in the second quarter, but a steal and layup by Micah Simpson put Morristown East ahead 12-6. 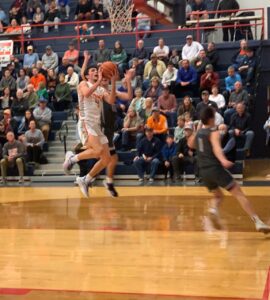 Sophomore Kyle Cloninger (4) goes up for a layup during the Hurricanes’ 59-55 loss in the regional semifinal on Tuesday. Photo by Brian Hamilton

Hale made another layup to cut the Dobyns-Bennett deficit to 14-10 with 4:44 left in the second quarter, but Morristown East would keep its distance from the Indians to four or six throughout most of the period.

A reverse layup by Braden Ilic gave the Hurricanes a 20-14 lead, but McKinley Tincher would come back with a jumper to pull the Indians back to within four.

Kyle Cloninger banked a three on Morristown East’s next possession for a 23-16 lead with two minutes left in the first half.

Jonavan Gillespie made a basket, followed by a corner three to trim the Hurricanes’ lead to 23-21 with just under a minute left before halftime.

Ilic hit a jump shot with 16 seconds left to give Morristown East a 25-21 lead and Simpson would miss a halfcourt shot at the buzzer to send the Hurricanes to intermission with a 4-point lead.

Dobyns-Bennett opened the third quarter with a layup by Brady Stump to cut the lead to 27-25 and Gillespie would later tie the game at 30-30 on a 3-pointer with 4:38 remaining in the third.

Simpson answered with a layup to give Morristown East a 32-30 lead, followed by a floater to push the lead to 34-30.

The senior point guard would then nail a three to cap a 7-0 run and give the Hurricanes a 37-30 lead with 2:13 left in the third quarter.

A three by Gillespie and a dunk by Browder would pull the Indians to within 37-35 with just over a minute left in the third.

Browder grabbed a steal and went to the other end for a layup on the next Morristown East possession, as Dobyns-Bennett quickly matched the Hurricanes’ 7-0 run, tying the game at 37-37 with 39 seconds to go in the quarter.

Simpson would hit a three at the third quarter buzzer to send Morristown East into the final set leading 40-37.

Gillespie was fouled by Ilic early in the fourth quarter and made both free throws to cut the Indians’ deficit to 42-41. Hale then made a layup to give Dobyns-Bennett its first lead of the game at 43-42.

Two Simpson free throws would put the Hurricanes back in front 44-43 with 4:14 left, but a layup by Browder would flip the lead back to Dobyns-Bennett, with the Indians leading 45-44.

Gillespie then gave Dobyns-Bennett some breathing room, hitting back-to-back threes to give the Indians a 51-44 lead with 2:08 remaining.

Hale was fouled on the next Dobyns-Bennett possession and sank a pair of free throws to put the Indians ahead 53-44 and cap a 10-0 run.

It looked as if Dobyns-Bennett would pull away from that point, but Hale committed a turnover, followed by a Simpson three to cut the Indians’ lead to 53-47 with 1:09 remaining.

Carter Metz turned the ball over on Dobyns-Bennett’s next possession, but Ilic would miss a three and Browder grabbed the rebound and split a pair of free throws on the other end.

Simpson grabbed a rebound and was fouled on the put back, converting a conventional 3-point play to pull Morristown East to within 56-50 with 28 seconds remaining.

Metz turned the ball over again on the next Dobyns-Bennett possession and Simpson was fouled on a 3-point attempt and converted all three to make the score 56-53 with 23 seconds left.

A trap in the corner on the Indians’ inbounds pass would allow for a jump ball situation, with the ball going back to the Hurricanes.

This was Morristown East’s prime opportunity to tie the game, but Simpson missed a three and Browder grabbed the rebound.

Browder missed the first foul shot, but made the second, keeping it a two-possession game, at 57-53.

Simpson was once again fouled on a 3-pointer and made the first two free throws, but missed the third, leaving the Hurricanes trailing 57-55 with eight seconds remaining.

Morristown East fouled Hale immediately and the Hurricanes needed for him to miss at least one of the foul shots. The senior would step up and make both, however, as Dobyns-Bennett won 59-55.

Micah Simpson led all scorers with 31 points, with 23 coming after halftime, while Malachi Hale led Dobyns-Bennett with 17. Jonovan Gillespie and Jack Browder also added 16 apiece for the Indians. Braden Ilic scored nine for the Hurricanes.

“Talent at all five positions is hard to beat,” Collins said of Dobyns-Bennett. “There’s night that they have five in double figures. Balanced scoring like that, it’s easy to cut heads off snakes sometimes, but Dobyns-Bennett is like Medusa, I guess. They’ve got a lot of heads. They’re a very good group.”

Morristown East has its season end at 28-5 after setting a school record for most wins in a season, while Dobyns-Bennett (27-6) will advance to the region final on Thursday to face Science Hill (31-4).

“The message before the game was speaking to what a special group this group of seniors is and what a special place that they have taken our program,” Collins said. “We’ve been very fortunate to string together years of success and I think some of it comes with pressure to continue that success. This is a very talented group.”

The Hilltoppers upset the Indians in the district tournament after Dobyns-Bennett won the first two regular-season contests. The teams will see one another again at Jefferson County on Thursday night at 7 p.m.