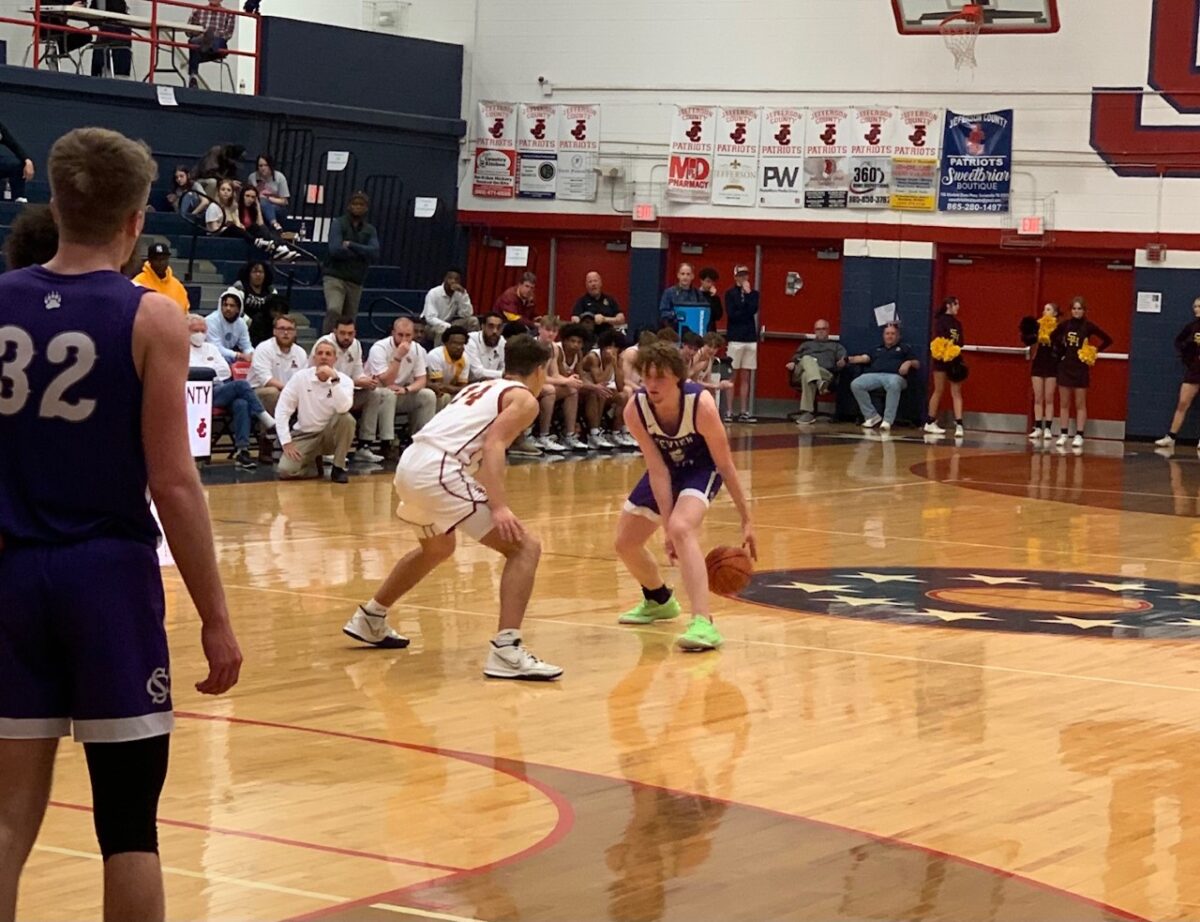 DANDRIDGE – Sevier County led by double digits against a 30-win Science Hill team, but the Hilltoppers were too much in the end. Science Hill scored the go-ahead basket with seven seconds to play, but the Smoky Bears had an opportunity to win on the last possession. Gavin Joslin’s three would not fall, however, as the Hilltoppers came away with a 50-49 win.

Sevier coach Ken Wright was hurting for his players — including seven graduating seniors — after the game but spoke highly of the team’s effort all season.

“These guys competed every night,” Wright said. “We didn’t always get the results we wanted, but we always got the effort and that’s all you can ask as a coach is to give us that great effort. It’s killing them in there, right now. They were that close to going to substate and playing for a region championship and unfortunately, this was the last game.”

Sevier County took an early 6-2 lead when Caleb Tarwater hit two free throws with 5:30 left in the first quarter. Jamar Livingston would respond by getting fouled and converting a 3-point play on the other end, cutting the Smoky Bears’ lead to 6-5.

Cooper Takacs scored on back-to-back layups to increase the Sevier County lead to 10-5 with three minutes left in the first. Livingston would hit two free throws on the other end to make the score 10-7, but the Smoky Bears would go on a 6-0 run, as Tarwater scored all six points.

Sevier County carried a 16-7 lead into the second quarter.

Another layup by Tarwater stretched the Smoky Bears’ lead to 21-10 early in the second quarter. The junior would then hit a three to make the score 24-13, as Tarwater could not be stopped in the first half.

Antionio Sydnor hit a three on the other end, as the Hilltoppers trimmed the deficit to 24-16 with 4:13 left in second.

Science Hill would trim the lead to 26-21 before Takacs caught an alley-oop layup for a 28-21 Sevier County lead. Camden Parrish then grabbed a steal and took it the other direction for a 30-21 lead with 45 seconds left until halftime.

Michaeus Rowe made a layup right before half, as the Smoky Bears took a 30-23 lead into the locker room at the half. Tarwater finished with 15 points in the first half.

Keynan Cutlip came out and immediately hit a three for the Hilltoppers, cutting the Sevier County lead to 30-26.

A layup and rebound by Takacs would increase the Sevier lead to 32-26, but Rowe made a layup on the other end of the floor to cut the deficit back to 32-28.

Livingston hit a jumper to pull Science Hill to within two, as the Hilltoppers trailed only 32-30 with 5:06 left in the third. The junior forward would tie the game at 32-32 on the next trip down the floor, as the defense had appeared to neutralize Tarwater early in the third.

Takacs was fouled on a layup on the Smoky Bears’ next possession and converted 1-of-2 for a 33-32 lead. Dalvin Mathes made a basket for Science Hill and was fouled, resulting in a 3-point play and a 35-33 Hilltopper lead.

Ownby would come back with a layup of his own to tie the game at 35-35 with 3:27 left in the third. A driving layup by Tarwater would give Sevier County the lead again, at 37-35.

Livingston made a layup to end the bleeding by the Hilltoppers and make the score 41-37 with 43 seconds left in the third.

Kris Kendrick hit a layup for Sevier County with six seconds left in the third quarter and gave the Smoky Bears a 42-37 lead heading into the fourth.

A three by Science Hill would trim the Sevier County lead to 43-40 early in the fourth quarter. On the next Hilltopper possession, Livingston drove to the basket and was fouled, converting both attempts to make the score 43-42.

Takacs was called for a foul on Livingston — who converted both free throws — and the game was tied again at 46-46 with 3:17 remaining.

Kendrick blocked a dunk attempt by Cutlip, giving the ball back to the Smoky Bears with 1:45 left. Livingston fouled out for Science Hill, after sending Takacs to the line with 1:24 remaining.

Takacs made 1-of-2 free throws, putting Sevier County ahead 47-46. Kendrick was called with goaltending on the other end, which gave the Hilltoppers a 48-47 lead.

Ownby made a basket inside to put Sevier County in front 49-48 with 37 seconds left. After a Science Hill timeout with 16 seconds left, Rowe found Cutlip on a backdoor cut for a two-handed dunk with seven seconds remaining for a 50-49 lead.

Senior Cooper Takacs (32) goes up for a shot over a Hilltoppers defender during the Smoky Bears’ 50-49 semifinal loss Tuesday night. Photo by Brian Hamilton

Sevier County immediately took a timeout and Tarwater got the ball across half-court, passing to Takacs, who almost lost the ball, before finding a wide-open Gavin Joslin on the right wing for three. The shot didn’t fall, and Science Hill grabbed the rebound and celebrated, as the Hilltoppers knew they had just survived a team that had given every ounce of fight they had.

“We went four across and we wanted to get the ball to our best ballhandler on the court and penetrator and we figured they’d run and jump and try to get the ball out of his hands, so we’d have somebody wide open,” Wright said. “We wanted to attack the basket because we were in the bonus. We didn’t want to shoot a three, but it was wide open, and we had a great look.”

Jamar Livingston led all scorers with 24 points, while Sevier County’s Caleb Tarwater finished with a team-high 19 points, with only four coming after halftime. Cooper Takacs had 13 for the Smoky Bears, while Reed Ownby added nine.

“Caleb got gassed there, he was doing so much,” Wright said of Tarwater’s play. “He was playing great, and I think that shocked them, but they started jamming in and making us take the outside shot and all year, we just haven’t shot the ball well from outside. We’re not a good outside shooting team.”

Brady Lawson, Michaeus Rowe and Antonio Syndor each finished with six points apiece for the Hilltoppers.