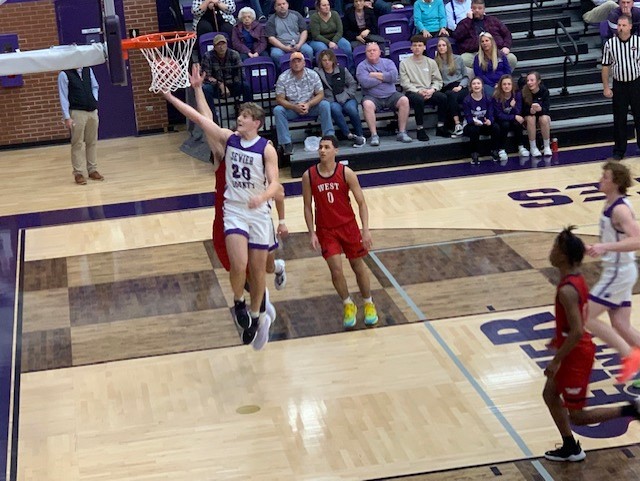 SEVIERVILLE – The Sevier County boys jumped out to an early lead over West on Tuesday night and cruised to a 74-60 win in the season opener.

The Smoky Bears got on the board first, but Will Biven nailed a three to put West ahead 3-2. Sevier County missed multiple layups early in the game, but the Rebels were unable to take advantage due to two early charging calls. 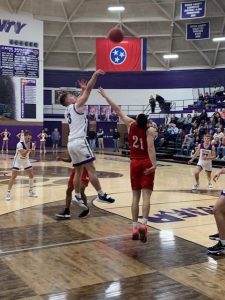 Camden Parrish (3) shoots over the outstretched arm of West’s Will Biven (21). Photo by Brian Hamilton

“It’s one thing to miss (layups), but you’ve got to get fouled,” Sevier County head coach Ken Wright said. “You can’t just be there and shoot three or four layups and nobody gets fouled.”

Camden Parrish nailed a three to give Sevier a 12-5 lead and the Smoky Bears led 16-11 at the end of the first quarter.

Caleb Tarwater was fouled on a made layup, but missed the free throw to put the Smoky Bears ahead 18-13. Tarwater was later fouled on another made basket and this time converted the foul shot, putting Sevier County ahead 23-13.

Cooper Takacs extended the Sevier County lead back to 10, at 35-25 with 1:41 left, but that would be the Smoky Bears’ last bucket of the half, as the Rebels ended the first half on a 6-0 run, cutting Sevier County’s lead to 35-31.

“It’s the first game and we’re not executing very well, but of course we don’t have the shooters we had last year, so we have to attack the basket more,” Wright said after the game. “Our game, this year, will be trying to get into the paint. We’re trying to draw fouls and get to the free throw line and we didn’t do a good enough job at the line. We’ve got to get to the line more.”

Parrish would end the Smoky Bears’ drought early in the third quarter, extending the lead to 37-31. Two threes by Biven would tie the game at 37-37 with 6:04 left in the third, capping a 12-2 West run, dating back to the first half. 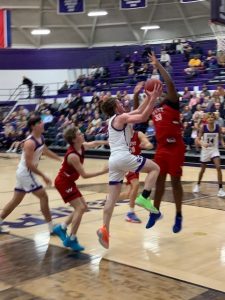 Caleb Tarwater (5) goes for a layup, as West’s Kevin Jack (33) attempts to block the shot. Photo by Brian Hamilton

Takacs ended the Rebels’ run with four consecutive points, giving Sevier County a 41-37 lead with 5:25 left in the third. Tarwater would convert another conventional three-point play, putting the Smoky Bears up 48-40 and drawing the fourth foul on Biven, sending the Rebels’ star to the bench.

While Biven was out, Sevier County went on a run and increased its lead to 70-53 in the fourth quarter after two Tarwater baskets.

Tarwater left the game with 4:41 remaining with a foot injury, but it did not look to be serious after getting looked at by the trainer.

“Tarwater is the one who kind of broke it open there in the third (quarter),” Wright said. “He really attacked their press well and once we got him the ball in the middle, he was able to attack and get to the rim. He’s real smooth at getting to the rim.”

SEVIERVILLE – Earlier in the evening, the Bearettes jumped out to an 18-3 first quarter over West (0-1) and never looking back, as Sevier County opened its season with a 65-point win.