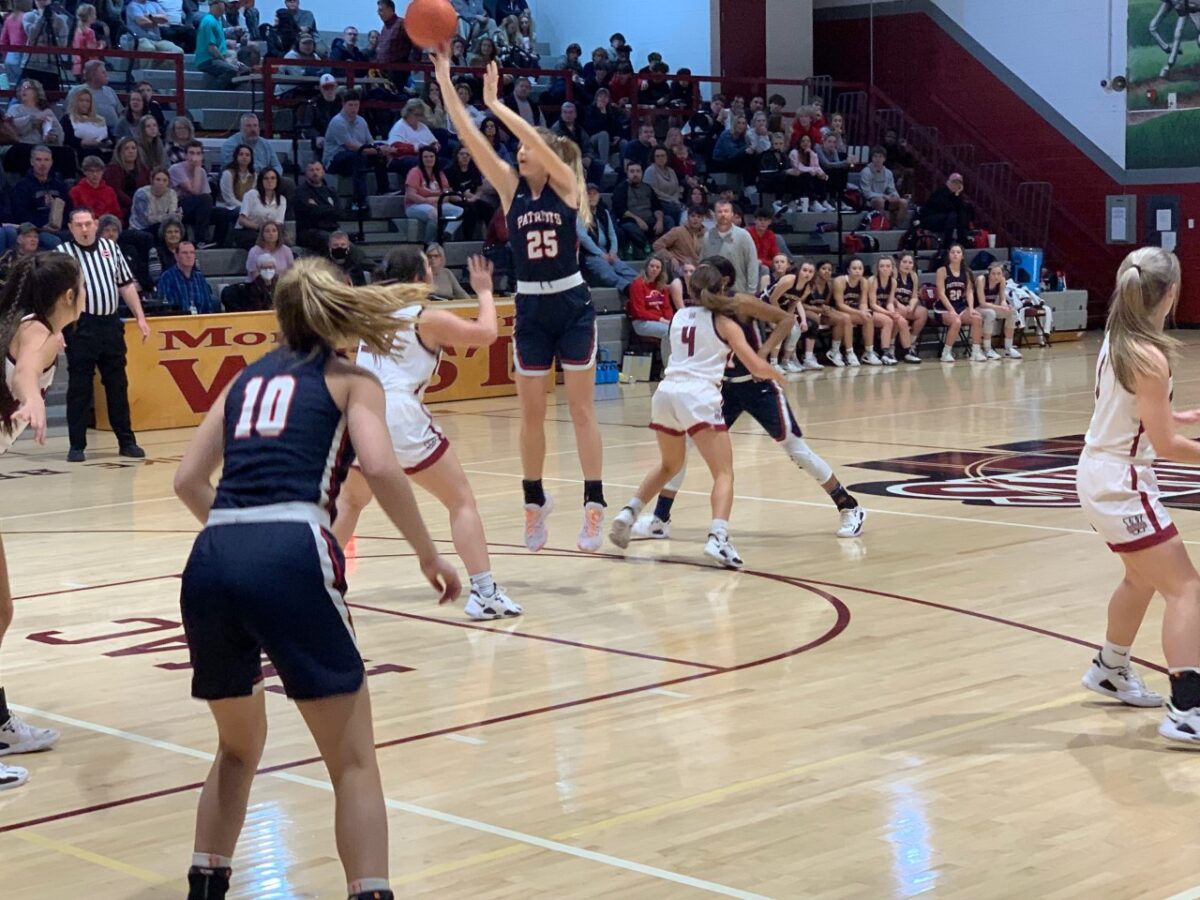 MORRISTOWN – Nina Lovelace set the tone early for Morristown-West, as the senior finished with 23 points in a narrow 54-53 win over Jefferson County.

The Lady Trojans held a sizeable lead in the second half, but the Lady Patriots were able to tie the game late in the fourth quarter. Morristown-West was able to escape narrowly with a 55-54 win. 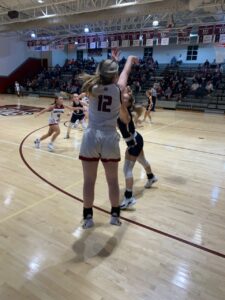 “I thought we controlled it, I really did,” Morristown-West head coach Johnny Gaylon said after the game. “It seemed like in the fourth quarter, we tried to run the clock out and that probably messed us up a little bit, but our girls played well and played hard.”

Nina Lovelace drained a three-pointer early on to give Morristown-West a 3-0 lead, but Kali McMahan responded with a foul-line jumper to make the score 3-2. McMahan came back and nailed a three on the next possession to put Jefferson County ahead 5-3.

Freshman Aubrie Messer made a layup to give Morristown-West a 15-9 lead with just over two minutes remaining in the first quarter.

Ansley Firtz made a steal and layup to make the score 15-11, Lovelace would nail another three to give the Lady Trojans a 20-13 lead after one quarter. Lovelace finished the quarter with 11 points.

A pair of three-pointers by Cadence Beaver increased the Lady Trojans’ lead to 29-15 with just over five minutes left in the second quarter.

Zoie Denton nailed a three to trim the Morristown-West least to 29-18. The Lady Patriots would cut into the lead further, as sophomore Brooke Satterfield drained a three to make the score 29-23 with 2:25 left before halftime, as Jefferson County embarked on an 8-0 run.

Lovelace was sent to the foul line with 1:31 remaining in the first half and put Morristown-West ahead 33-23. Brylee Lindsey was sent to the line with seconds left until halftime and missed both, sending Jefferson County to the half, trailing 33-23. 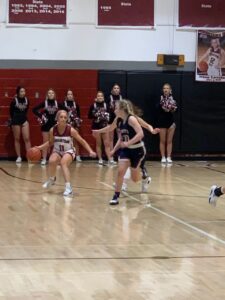 Lily Beth Johnson converted a pair of free-throws to cut the Lady Trojan deficit to 33-27 with just under six minutes left in the third. A layup by Beaver would push the lead back to 35-27.

A layup by Ansley Fritz would make the score 35-29 with 2:39 left in the third quarter.

Lovelance scored a layup to extend the Morristown-West lead back to 39-29, but Caroline Loveday drained a three to trim the Trojan lead to 39-32 with under a minute remaining in the third.

Beaver made a steal and went full court for a layup to put Morristown-West ahead 41-32, as the Lady Trojans would go ahead 43-34 entering the fourth quarter.

Bolin made a layup to cut the deficit to 45-39 with 6:16 left in the game, but Lovelace was fouled and made both shots to put Morristown-West ahead 47-39.

Brooke Satterfield nailed a three to make the score 47-42, but Aviah Bunsic finished a layup to increase the Lady Trojan lead to 49-42. Satterfield later drained another three-pointer to trim the Morristown-West lead to 48-45 midway through the fourth quarter.

McMahan made the score 49-47 after sinking two foul shots. Loveday made a pair of free-throws to bring the Lady Patriots all the way back for a 49-49 tie with 3:16 remaining.

A three-pointer by McMahan would put Jefferson County ahead 52-50 with 2:31 left in the fourth, but Morristown-West would tie the game on the next possession.

After a timeout, Beaver went in for a layup, giving the Lady Trojans a 54-52 lead. McMahan — who had just about taken the game into her own hands — backed down a defender and pulled off a spin move to score and tie the game at 54-54 with 12 seconds remaining.

“I just told them to keep battling and keep guarding, because that’s how they were going to get themselves back into the game,” Jefferson County head coach Jeremy Byrd said. “We got mixed up a little bit on defense and that’s going to happen, but we got some deflections, got some stops, got some loose balls and just made things happen.” 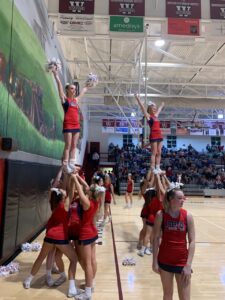 The Jefferson County cheerleaders root for their Lady Patriots during the fourth quarters. Photo by Brian Hamilton

The game was set to go into overtime, but Morristown-West reserve Mia Dinkins was fouled on her way to the basket, sending the junior line to the charity stripe with three seconds left. Dinkins made the first foul shot and missed the seconds, leaving McMahan with no choice but to heave a three-quarter court shot that clanged off the backboard.

“Mia (Dinkins) is one of those kids who hasn’t played tremendous minutes, but she’s played a lot of basketball in her years here,” Gaylon said of the final free-throws, which he admits that the second free-throw was not an intentional miss. “We just wanted to make sure that they caught it coming to our basket, which was probably, pretty good, but it wasn’t drawn up that way.”

Nina Lovelace led all scorers with 23 points for the Lady Trojans, while Kali McMahan topped Jefferson County with 18.

“I thought we deserved to win the game, but this is a good team,” Gaylon said of Jefferson County. “They’ve got some athletes out there.”