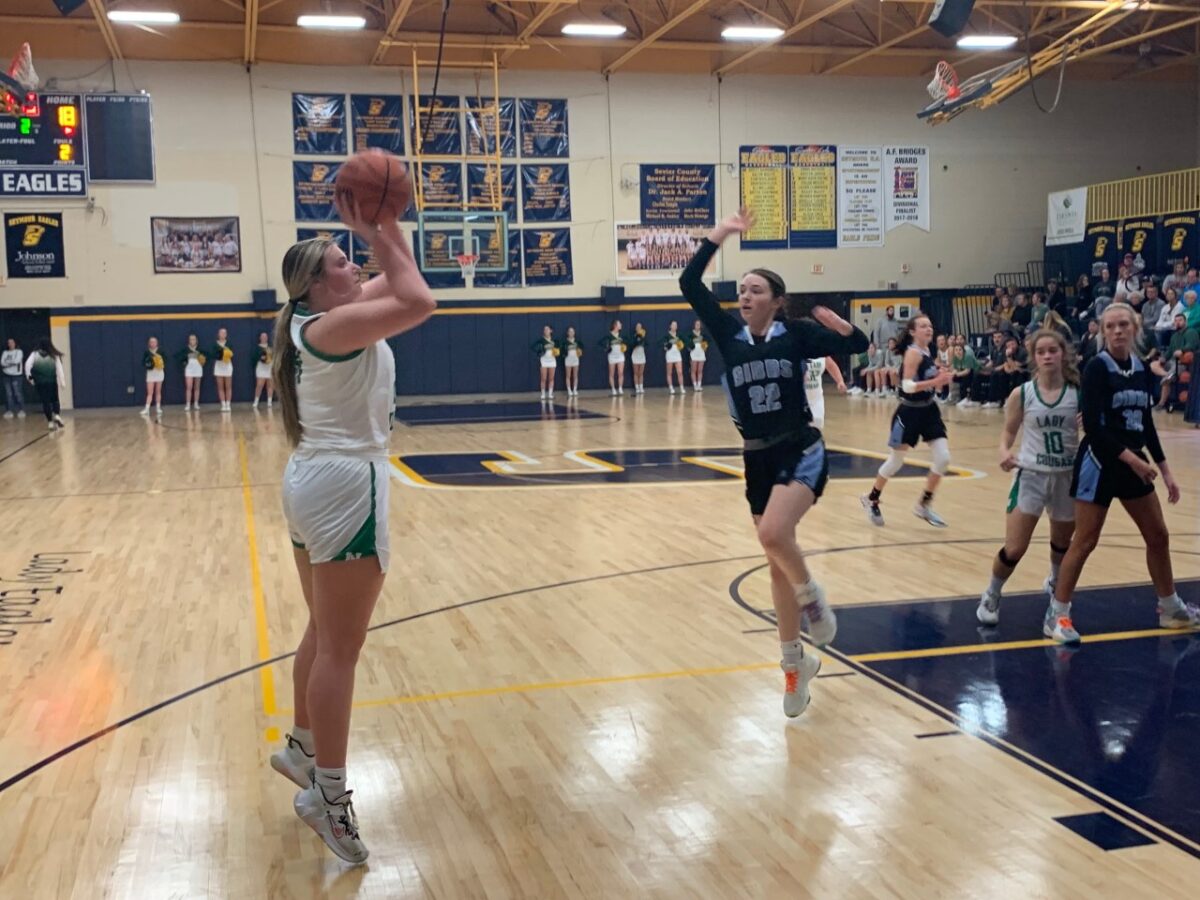 SEYMOUR – Northview Academy jumped out to an early 12-0 lead and never looked back, as the Lady Cougars went on to win 43-28 over Gibbs in the District 3 semifinals, despite shooting just 25-percent on the night.

“We had great looks; it just came down to, we weren’t ready to play,” Northview coach Brooke Shelley said. “I’m very disappointed and I’ll apologize to all of Cougar Nation because we didn’t come out doing what we’re supposed to do tonight, and we absolutely have to be better.”

A layup by Reagan Brown, followed by four straight points by Jordan White gave Northview an 8-0 lead midway through the first quarter. Josie Horner then sank two free throws to put the Lady Cougars ahead 10-0.

Brown then grabbed a steal and scored to push the Northview lead to 12-0 with 1:36 left in the opening quarter. Gibbs finally got on the board with under a minute left when Dakota Large banked a three off the backboard to make the score 12-3. 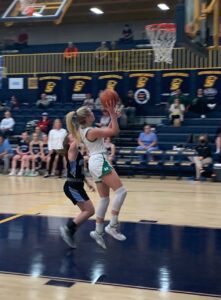 Northview Academy’s Reagan Brown (1) goes up for a fast-break layup over a Gibbs defender during the Lady Cougars’ 43-28 win in the District 3 semifinals. Photo by Brian Hamilton

The Lady Cougars had an opportunity to go ahead more at the end of the first period but mismanaged the clock and were unable to get a shot off before the buzzer sounded, taking a 9-point lead into the second quarter.

“I think it’s just mentally not coming in not ready for the game and not knowing the time and situation, knowing we’ve got to get a shot off,” Shelley said. “We got the ball with 14 seconds to go, and our best shooter is wide open, and we don’t take the shot, so mentally we just weren’t prepared, and I’ll take that one as a coach for not having them mentally prepared for this game. This one’s on me and we’ve got to find a way to get them mentally prepared, no matter the opponent.”

A rebound and layup by Horner would put Northview ahead 14-3, but Brenna Taylor hit a layup for Gibbs to make the score 14-5 with just over five minutes left in the second quarter.

Camryn Brown answered with a long 2-pointer for a 16-5 lead. Taylor was then fouled and made both free throws, cutting the Lady Eagles’ deficit to 16-7 with 4:33 remaining in the half.

A jumper by Moe Harvey made the score 18-7, followed by a short jumper by Horner to give Northview a 20-7 lead with 1:03 left before intermission.

Neither team would score over the last minute, as the Lady Cougars took a 20-7 lead to halftime.

Brown came out and immediately nailed a three to push the Northview lead to 23-7, but Gibbs would proceed to go a 6-0 run, fueled by two Jadyn Parker baskets, making the score 23-13 with 6:29 left in the third quarter.

Two free throws by Horner would stall the Lady Eagles’ run, as Northview went up 25-13. A 3-pointer by Savannah Bates would make the score 28-13, in favor of the Lady Cougars.

White was fouled and made both free throws, but Addison Merritt would answer for Gibbs to cut the score in half, at 30-15 with 3:36 left in the third.

Taylor would make the score 31-18 with 5 seconds left in the quarter, as Northview took a 13-point lead into the final stanza.

White grabbed a steal and converted it for two points and a 34-18 lead early in the fourth. Taylor answered on the other end with a 3-pointer to make the score 34-21. 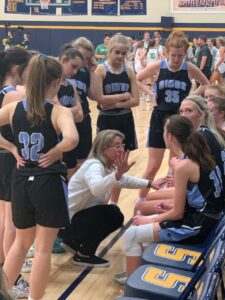 Gibbs head coach Sarah Sharp tries to rally her Lady Eagles during the second half of Northview’s 43-28 win. Photo by Brian Hamilton

A steal and layup by Brown extended the Lady Cougars’ lead to 38-21, but Taylor again answered with a long bank shot on the other end.

Another three by Gibbs would trim the Northview lead to 38-26 with just under two minutes left, but the Lady Cougars would answer with a lob to Horner off an out-of-bounds play. The 6-2 sophomore would corral the pass and put it in for a 40-26 lead with 1:31 left.

Brown would put the final dagger in the Lady Eagles with a long three, making the score 43-27 with 56 seconds remaining. Northview would go on to win 43-28, advancing to the District 3 Championship game on Monday night.

Reagan Brown led all scorers with 16 points and eight rebounds, while Josie Horner and Jordan White each added 11 points apiece. Point guard Leny Torres did not register a point in the scoring column, but finished with eight steals, six rebounds and three assists.

Despite the win, Shelley said her team must play better to win the district championship next week.