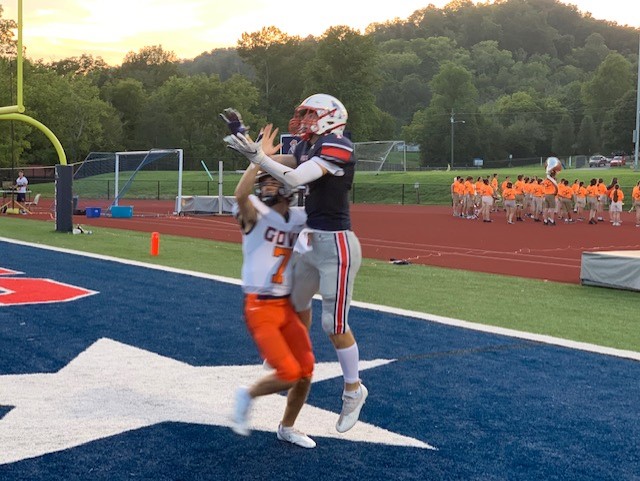 DANDRIDGE – In a battle between Class 6A Region 1 foes, Jefferson County upended William Blount by a score of 17-14.

The Patriots got on the board first, driving 48 yards in four plays, capped by a 9-yard touchdown pass from Izaiah Hall to Taylor Stoltz for a 7-0 lead with 9:03 remaining in the first quarter.

William Blount’s Eli Walker fumbled on the Governors’ first possession, which Jefferson County turned into six, as Omarion Mills ran for a 2-yard touchdown, putting the Patriots in front 14-0 with 7:47 left in the first. 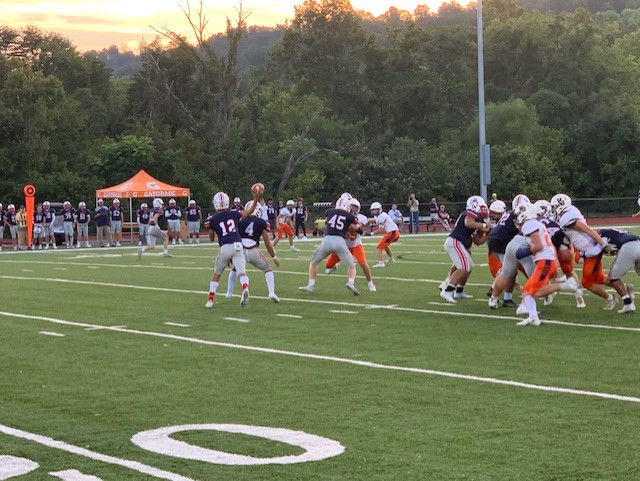 Jefferson County’s Izaiah Hall (12) looks for a receiver during the Patriots’ 17-14 win over William Blount Friday. Photo by Brian Hamilton

The Governors responded on their next possession, as Austin Auker hauled in a 19-yard touchdown from Matthew Clemmer, cutting the Patriots’ lead to 14-7 after one quarter of play.

Midway through the second quarter, Clemmer dove into the end zone for a 1-yard touchdown run to tie the game at 14-14. The teams would go to the locker room with the score tied.

“They had their way with us in the second quarter,” Jefferson County head coach Spencer Riley said. “We shot ourselves in the foot and didn’t play very disciplined at times.”

Early in the third quarter, Izaiah Hall hit Cade Parker for what would be a first down, but Parker was stripped of the ball, giving William Blount the ball at the Patriots’ 40-yard line.

The Governors would drive to the 15-yard line and were poised to take the lead when Colin Young intercepted Clemmer to end the threat.

Jefferson County’s Dylan O’Neal booted a field goal with less than a minute left in the third quarter, giving the Patriots a 17-14 advantage.

William Blount would mount a drive in the waning minutes of the game, as Clemmer drove the Governors to the Jefferson County 25-yard line. Clemmer was then intercepted in the end zone by the Patriot defense, giving Jefferson County a 17-14 win.

“We fought hard,” William Blount head coach Philip Shadowens said. “I thought our kids fought and gave ourselves a chance to win on that last drive. That’s about all you can ask for.”

William Blount’s Matthew Clemmer scores on a 1-yard rushing touchdown to tie the game at 14-14 in the second quarter. Photo by Brian Hamilton

Clemmer finished with 208  yards on 23-of-36 passing with one passing touchdown and another on the ground, against two interceptions.

Omarion Mills led Jefferson County with 107 yards rushing and one score, before leaving the game with an injury.