GATLINBURG – Leah Stinnett has been having a district tournament for the ages with the first triple-double in school history against Chuckey-Doak on Friday night. The sophomore guard followed that up by leading Gatlinburg-Pittman in scoring — with 20 points — and helping propel the Lady Highlanders to the district finals with a 70-47 win over Happy Valley. 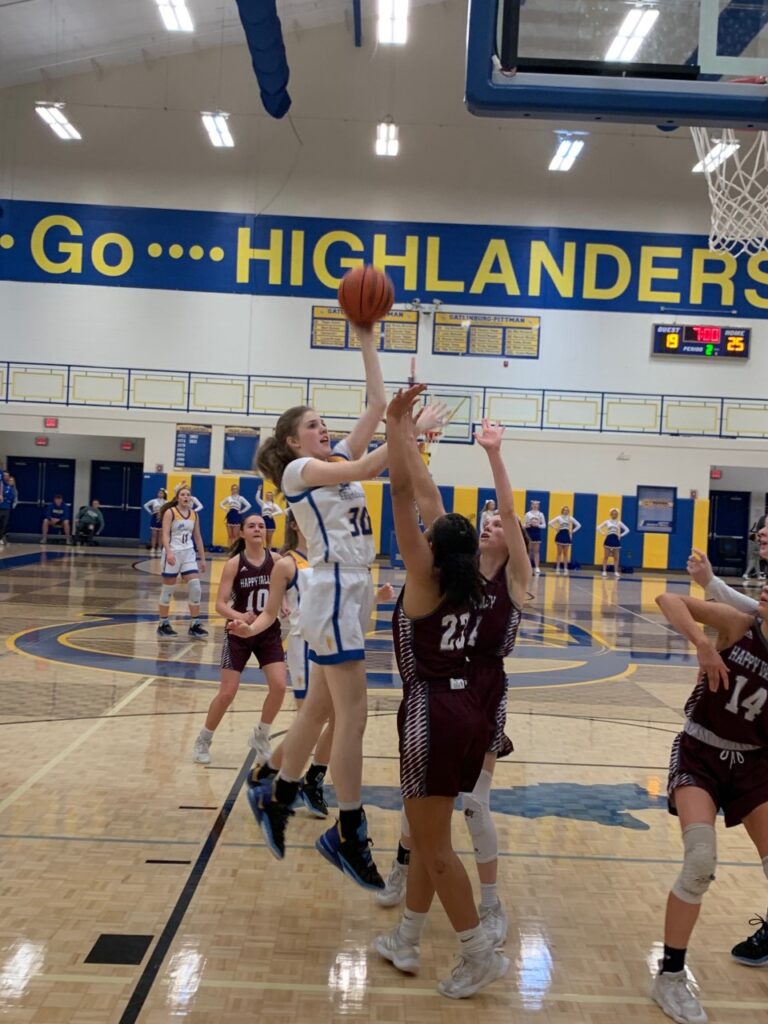 Gatlinburg-Pittman got off to a great start in the fourth quarter and lead after the Lady Warriors pulled to within six early in the second quarter, GP went on a 10-0 run and never looked back.

“I thought that our guards shot the ball really well, which kind of put them out of that zone,” Gatlinburg-Pittman coach Katie Moore said. “I think early on, they were trying to stop Maddy in the paint, which I am sure is everybody’s plan, but our guards did a great job of shooting, so I thought that stretched them out some and open Maddy up. I thought that our defensive pressure got to them.”

Gatlinburg-Pittman would get the lead back to 25-15, but a rebound and putback by Happy Valley’s Kenzie Ramey with 14 seconds left in the first made the score 25-17 after one quarter of play.

The Lady Warriors trimmed the lead to 25-19 early in the second quarter, but a three by Graycee Valentine, followed by a Leah Stinnett jumper pushed the Gatlinburg-Pittman lead back to 30-19 with 5:41 left until halftime.

Maddy Newman made a layup and was fouled, but missed the foul shot, making the score 32-19.

On the next Gatlinburg-Pittman possession, Shilah Whaley made a layup and was fouled, converting the 3-point play for a 35-19 lead, capping a 10-0 Lady Highlanders run.

A layup by Newman gave Gatlinburg-Pittman a 37-21 lead with 3:03 left in the second quarter. The next couple minutes would remain scoreless, until Kayle Yates was fouled and made both free throws for a 39-21 advantage with 1:02 left. 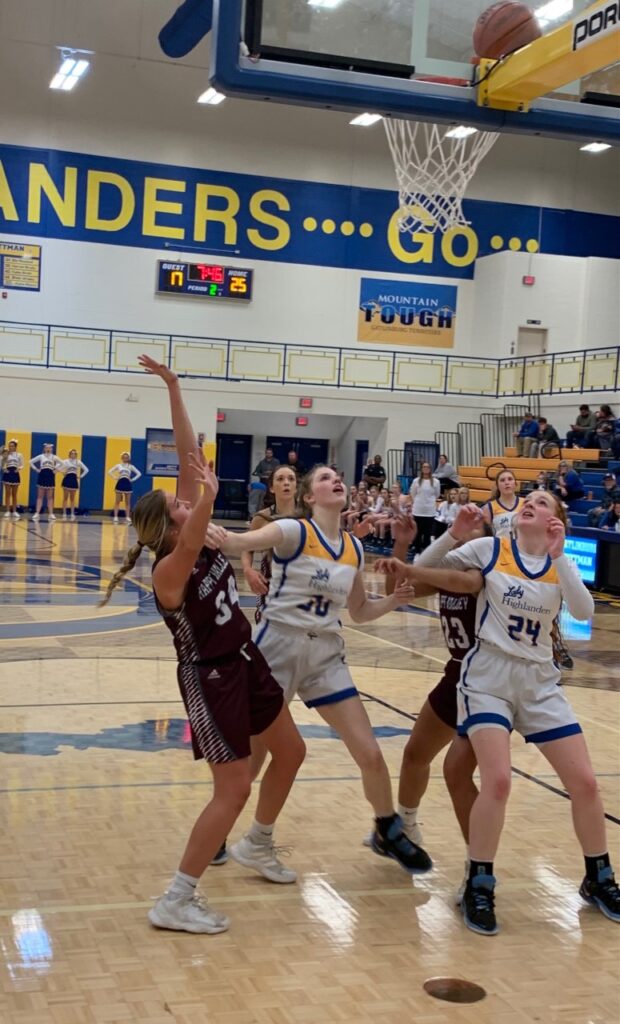 Gatlinburg-Pittman’s Maddy Newman (30) and Kendl Reagan (24) box out for a rebound against Happy Valley defenders. Photo by Brian Hamilton

The Lady Highlanders had an opportunity to add to the lead, but Valentine missed a three at the buzzer, sending Gatlinburg-Pittman to halftime with an 18-point cushion.

Happy Valley was unable to make a dent in the Gatlinburg-Pittman lead in the third quarter, as the Lady Highlanders led 51-30 with less than two minutes left in the third.

Leah Stinnett was fouled on a layup and converted the 3-point play to give Gatlinburg-Pittman a 54-32 lead with 36 seconds remaining in the period.

Happy Valley’s Kadie Bailey went to the line and converted 1-of-2 free throws to make the score 54-33 with five seconds left, but Stinnett took the inbounds pass and darted down the court for a running three that beat the clock and gave the Lady Highlanders a 57-33 lead after three quarters.

“I joke with her about that all the time, because she’s the best at shooting at the end of the quarter,” Moore said of Stinnett. “As soon as I saw that there was just a little bit of time, of course, I was yelling her name. She did a great job of getting it off in time, but I didn’t think she had enough time to get all the way to the 3-point line.”

Gatlinburg-Pittman took a 62-37 lead early in the fourth, but Happy Valley’s Ramey drained a three to make the score 62-40 with 6:20 remaining.

A rebound and layup by Newman would push the lead back to 64-42 and a basket by Lily Stinnett would increase the Gatlinburg-Pittman lead to 66-42.

Kayle Yates (23) goes up for a jumper over Happy Valley defenders during Gatlinburg-Pittman’s 70-47 semifinal win. Photo by Brian Hamilton

Valentine would add a layup to make the score 68-44 with 2:33 left, as the Lady Highlanders would cruise to a 70-47 win and a trip to the regional finals on Wednesday.

While Gatlinburg-Pittman came away with the win, Moore said there was much to be improved upon before facing Alcoa again, including rebounding and turnovers.

“I know for sure we had eight (offensive rebounds allowed) going into halftime, which is way too many to give up in a half and we actually addressed that at halftime, and I don’t necessarily think we did any better in the second half,” Moore said. “Our turnovers also killed us. I didn’t necessarily think they were all forced, I just think that sometimes we were kind of panicking and didn’t make great passes. Kudos to them defensively, because I do think they made us turn the ball over some.”

Leah Stinnett followed up her triple-double from Friday night with a 20-point game, which included five 3-pointers. Maddy Newman also made a large contribution with 18 points, while Kayle Yates added 10.

Gatlinburg-Pittman (25-9) will face off against Alcoa (22-11) for the fourth time this season, with the Lady Highlanders winning the last two at home. Wednesday night’s game will also be at Gatlinburg-Pittman.

“It’s very tricky,” Moore said of playing a team four times in a season. “You just really have to forget the last times that you’ve played them, and you just have to come out, knowing it’s going to be a battle. It’s going to boil down to who can take care of the ball better and who hits the board and who wins the 50-50 balls, I think. I’m looking forward to it. It’s going to be interesting, but the good news is that win or lose, you’ve still got another game.”

Happy Valley’s season ends with a record of 12-18.