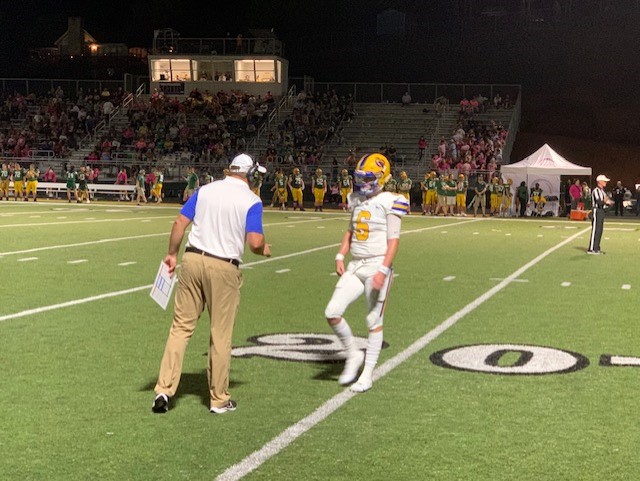 KODAK – Gatlinburg-Pittman started fast on Thursday night and took a 41-0 halftime lead, en route to a 48-6 win, keeping the Highlanders in position to finish second in Region 2.

Gatlinburg-Pittman hadn’t played in three weeks, due to a bye week followed by a COVID forfeit by Hampton last week.

“It helped that we got out to a big lead, but we haven’t played recently, so we’ve got to play,” Gatlinburg-Pittman head coach Brad Waggoner said. “We’ve just got to keep getting better. I was really pleased with the way we came out, but we gave up a little too much on defense at times. If we keep getting better every week, we’re going to be a tough out at the end of the season.”

Gatlinburg-Pittman quarterback Brady Hammonds had a career game, throwing for 351 yards and five touchdowns on 20-of-28 passing. 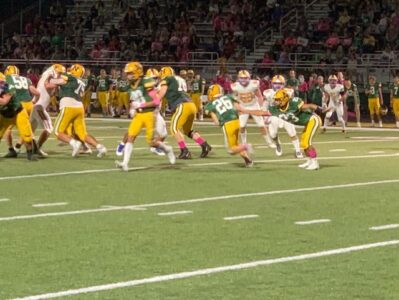 Northview Academy quarterback Alex Cruz-Mendoza (23) hands off to Nick Schroth (26) during the Cougars’ 48-6 loss to Gatlinburg-Pittman.

The sophomore put Gatlinburg-Pittman on the board on the first play of the game with a 59-yard touchdown pass to Houston Byrd for a 6-0 lead.

Hammonds tossed his second touchdown of the night on a 16-yard strike to Carlos Orr. The two-point conversion failed and the Highlanders held a 12-0 lead after one quarter of play. Orr was in his first game back since suffering an injury early in the season opener against Seymour.

“We haven’t had a full team the whole entire season, so we finally got all these guys back,” Waggoner said.

Early in the second, Hammonds tossed his third touchdown pass, and second to Orr, from 8 yards out. For the third time of the night, Gatlinburg-Pittman’s PAT failed, leaving them with an 18-0 lead.

With just over four minutes left until halftime, Levi Hill went into the end zone for a 4-yard score, putting the Highlanders ahead 34-0.

Hammonds threw his fifth touchdown of the night on a 70-yard pass to Whit Whaley with 1:07 left in the half, putting Gatlinburg-Pittman ahead 41-0 at halftime. 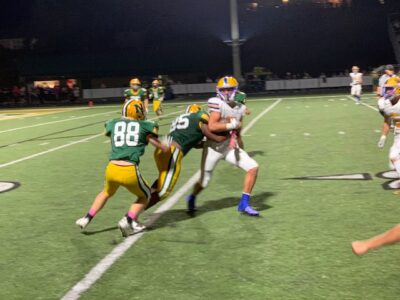 Northview Academy finally got on the board at the end of the third quarter with a drive that spanned the entire quarter, thanks in part to a running clock, as William Kirby went into the end zone for a score. Gatlinburg-Pittman led 41-6 after three quarters.

“We’ve got to get off the field,” Waggoner said. “We’ve got to play the same way whether we’re up by a bunch or not. We wanted a shut out, but you’ve got to give them some credit because they made some plays on that drive.”

The Highlanders would put one more score on the board in the fourth quarter to win 48-6, all but setting up a battle for second-place in Region 2 with Pigeon Forge on October 28.

Gatlinburg-Pittman (5-3, 3-1 Class 3A Region 2) will host Scott (1-6) on Friday night. The Highlanders have now won four in a row since the loss to Loudon on September 9.