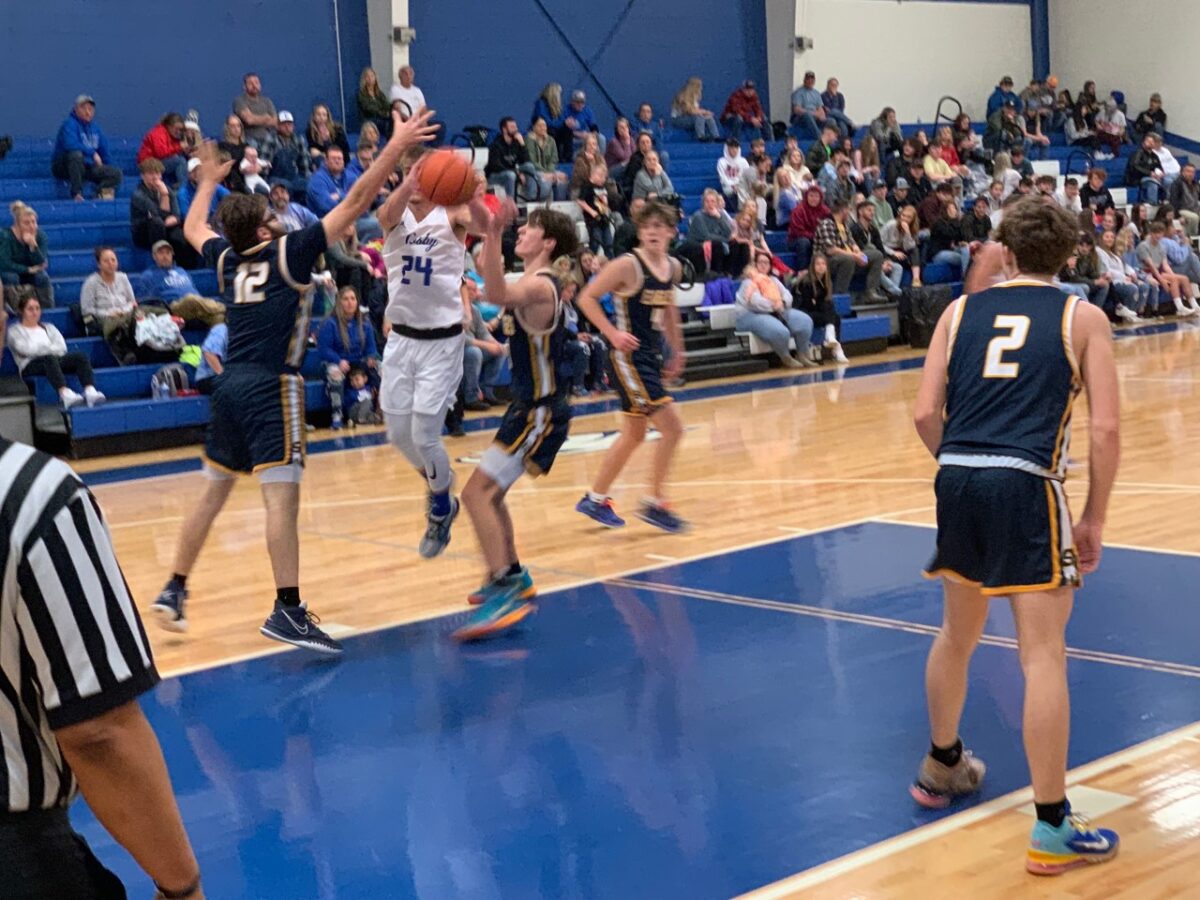 COSBY – Both Cosby and Seymour entered Thursday night’s contest with just two wins on the season. Seymour looked as if it would leave Cosby on a snowy night with their third victory of the season, as the Eagles led for the majority of the game and held a 13-point advantage in the fourth quarter. 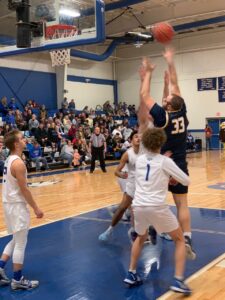 Seymour’s Stan Pennington (33) goes up for a layup over Cosby defenders. Photo by Brian Hamilton

Cosby would not go quietly into the night, however, as the home Eagles went on a furious rally within the span of three minutes to get back in the game and pull out a 65-59 win.

“We beat Seymour by 20 over there, but we just came out and didn’t play well,” Cosby head coach Cody Lowe said. “Give Seymour credit, they played really good defensively the first three quarters and we were sort of flat, but we came out in the fourth quarter with our backs against the wall, down 13, and turned it on.”

Seymour took an early 5-0 lead on a steal and layup by Connor Hilton, followed by a conventional three-point play by Cameron Soulages.

Cosby would get on the board with a three-pointer by Paxton Coggins, making the score 5-3. Seymour answered with another steal and layup by Soulages, putting the Eagles ahead 7-3 with 4:35 left in the first quarter.

Eli Williams scored on a layup and blocking foul to convert a three-point play, putting Seymour ahead 10-5. A conventional three-point play by Payton Raines, followed by a Slate Shropshire basket, tied the game at 10-10 with 2:42 left in the first.

Seymour would go on an 8-0 run to stretch the lead back to 18-10 after Soulages drained back-to back threes. Cosby answered with four straight points, capped by Shaydan O’Dell’s full court driving layup at the buzzer, making the score 18-14 at the end of the first.

Shropshire made a basket early in the second quarter to make the score 20-16, but Seymour would later stretch the lead back to 27-19 on a three with 2:30 left in the half.

O’Dell made a layup to cut the Cosby deficit to 27-22 and Hayden Green then made a jumper to pull the Eagles to within 27-24 with just over a minute left before halftime.

Hilton banked in a floater to increase the Seymour lead to five, but a steal and layup by Shropshire would pull Cosby to within 29-26 at halftime.

Shropshire made a basket early in the third quarter to trim the Seymour lead to 29-28, but Seymour would go ahead 33-28 after a pair of baskets inside by Stan Pennington.

Two free-throws by O’Dell and a pull up jumper by Green brought Cosby back to within one, at 33-32. Cosby continued to answer Seymour run for run, but the Eagles could not seem to grab their first lead of the contest.

A three by Soulages, followed by a layup, would give Seymour a 38-32 lead with 3:02 left in the third quarter. Another Seymour three — this time by Caleb Ogle — stretched the Eagles’ lead to 43-34. Seymour led 45-34 at the end of the third.

Pennington scored a basket to open the fourth quarter, giving Seymour a 47-34 lead and capping a 14-2 run by the Eagles.

Cosby cut the lead to 10, but an old-fashioned three-point play by Eli Williams put Seymour ahead 50-37 with just over six minutes remaining.

A basket by Shropshire, followed by a Corey Askew jumper, cut the Cosby deficit to 50-41 with 5:40 left. Seymour’s Bryce Chapman answered immediately with a three to put the Eagles ahead 53-41.

Shropshire was fouled on a layup and converted the three-point play to make the score 53-44. The junior then stole the ball and scored a layup to pull Cosby to within seven. 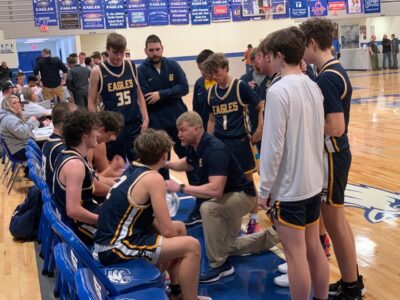 Coggins nailed a three, trimming the Cosby deficit to 53-49 with 3:50 remaining. Seymour committed a charging foul on the other end and O’Dell made the Eagles pay, scoring a basket and the foul to make the score 53-52 with 3:24 to go.

With 2:26 remaining, Coggins drove the right side for a scoop shot that gave Cosby its first lead at 54-53 and sent the home crowd into a frenzy. Seymour’s Williams would answer on the other end with a three, however, putting the Eagles back in front 56-54.

Cosby’s Green would score on a basket and foul on the next possession, giving the home team a 57-56 lead with just over a minute remaining. After Seymour came up empty, Coggins nailed a three with 53 seconds left to put Cosby up 60-56 and once again ignite the Cosby crowd.

“I told them to just trust the process and that we had to get stops on the defensive end,” Lowe said. “I knew we would start making some shots and find some rhythm offensively. We got some key stops down the stretch and, of course, some big turnovers, and we got out in transition and that really helped us.”

Hilton nailed a three to cut the Seymour deficit to 60-59 with 38 seconds remaining, but Cosby would salt the game away from the foul line for a 65-59 win.

“We got selfish on the offensive end and took bad shots and didn’t play defense on the other end,” Seymour head coach Dustin Carr said. “We thought the game was over and shut down. Then, once Cosby got rolling, we forgot everything we had talked about.”