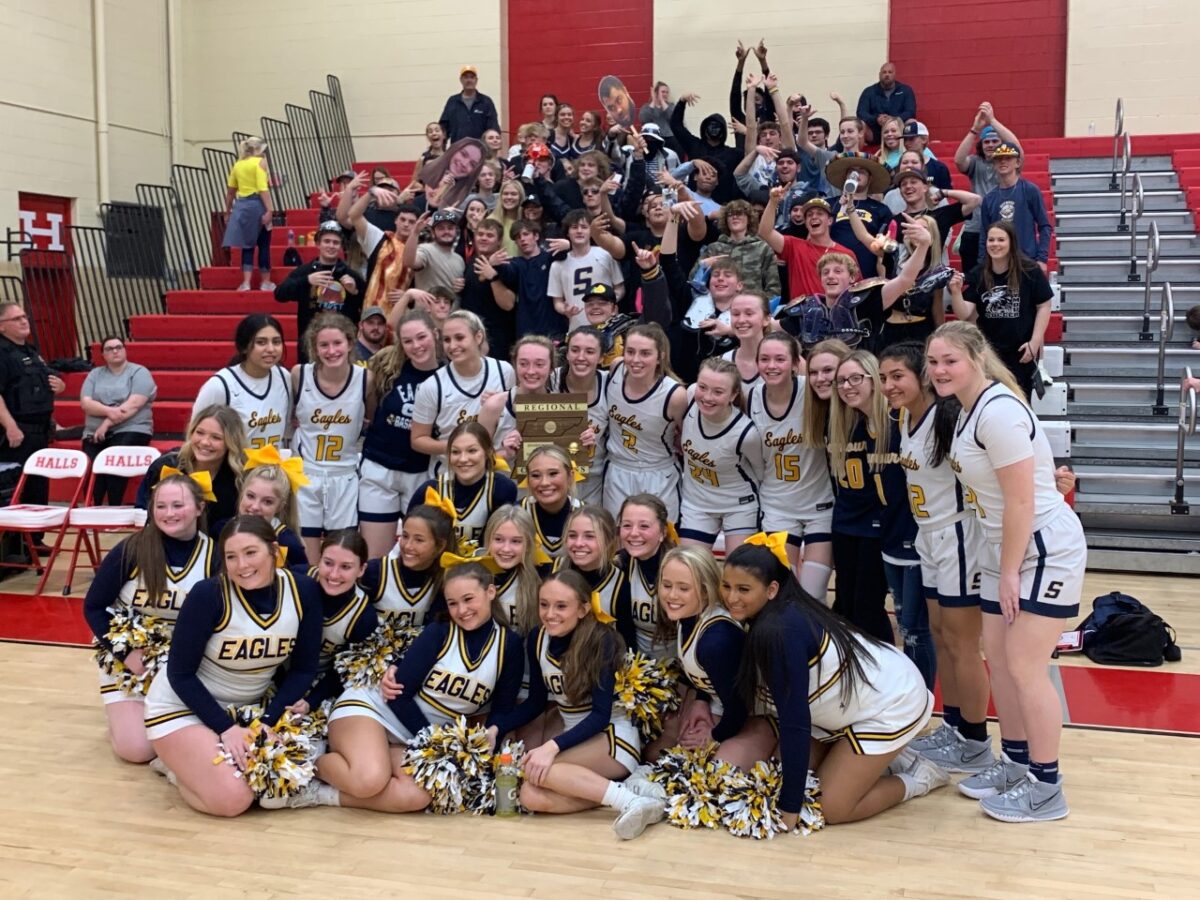 KNOXVILLE – After the district championship game a week ago, Seymour head coach Greg Hernandez was asked if he would like to face Northview Academy a fourth time, a team that played the Lady Eagles tough in all three contests. His answer: “Hell no.”

After the two teams went on their separate ways into regional play, it became evident that the two teams were on a collision course yet again. The two teams met at Halls Gymnasium on Wednesday night and the first quarter looked as if it was going to be similar to the other three.

The only difference in the regional final is that the Lady Cougars’ shots weren’t falling, and they never really started falling, as they did in the previous matchups. Seymour would employ its vaunted defense and come away with a 50-29 win for its first regional championship since 2009, when the Lady Eagles defeated Gibbs 58-52. 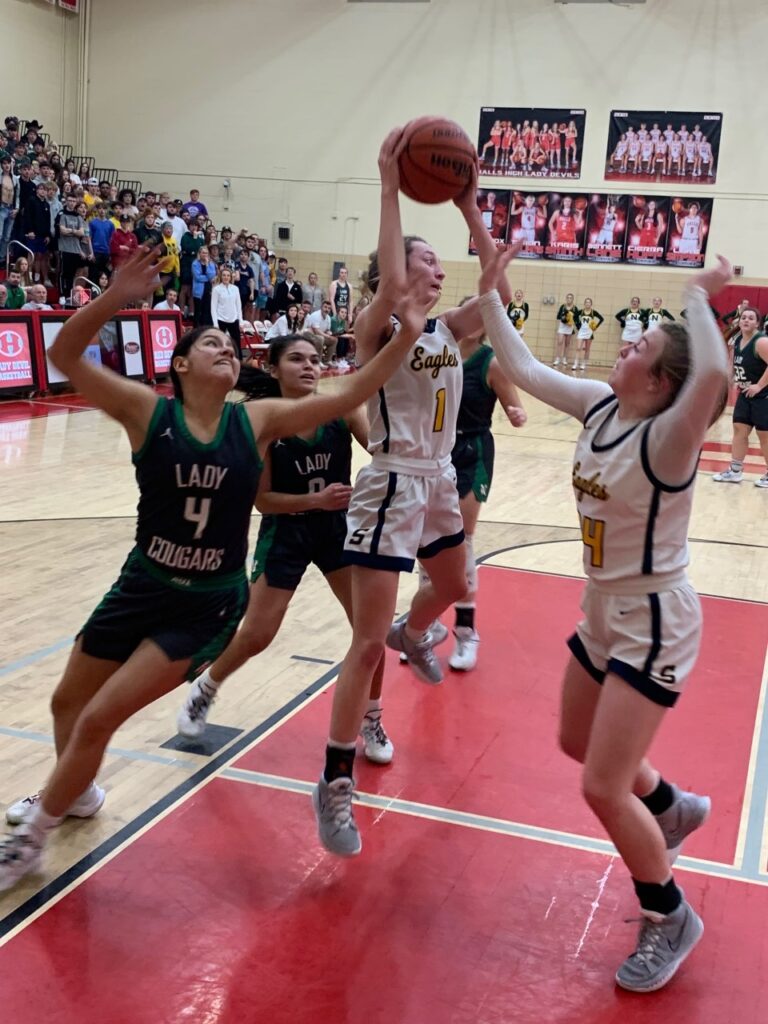 It is the first time Seymour has won the district and region in the same year since 2004. The Billboard charts were topped by Usher, Chingy, Twista and OutKast in March 2004 and most of this year’s team wasn’t even born.

That team was 30-3 and advanced to the Final Four before losing to McMinn Central. The Lady Eagles are hoping for the same fate this year.

“Two years ago, we won 11 games and this year we’re at 29 and were 32 minutes away from going to the state tournament,” Hernandez said after the game. “I don’t even know who I am right now. I’m just so proud of these kids for buying in, because it hasn’t been easy, and they’ve just fought and just stayed the course.”

Both teams were scoreless for over two minutes to begin the game, but Seymour’s Kaylyn Jarvis broke the stalemate with a reverse layup with 5:51 left in the first quarter.

Jaden Cummings hit a three from the top of the key to give the Lady Eagles a 5-0 lead with 4:21 left in the first. Northview would respond with a Josie Horner layup and a pair of Jordan White free throws to cut the deficit to 5-4 with 3:30 left.

A midrange jumper by Bailey McCoy, followed by a corner three by Emma Watson, put Seymour ahead 10-4 with 2:07 left in the first period.

McCoy caught a rebound on a Kaylen Schultz miss and put it back for a 12-5 Lady Eagles lead. Neither team would score for the final 1:23 of the first quarter, as Seymour took a 12-5 advantage into the second set.

Jarvis nailed a three to open the second quarter, giving the Lady Eagles a 15-5 lead. McCoy would get fouled on a layup and miss the free throw, as the Seymour lead ballooned to 17-5.

Northview finally ended a 12-1 Seymour run when Moe Harvey was fouled and hit both free throws to make the score 17-7. 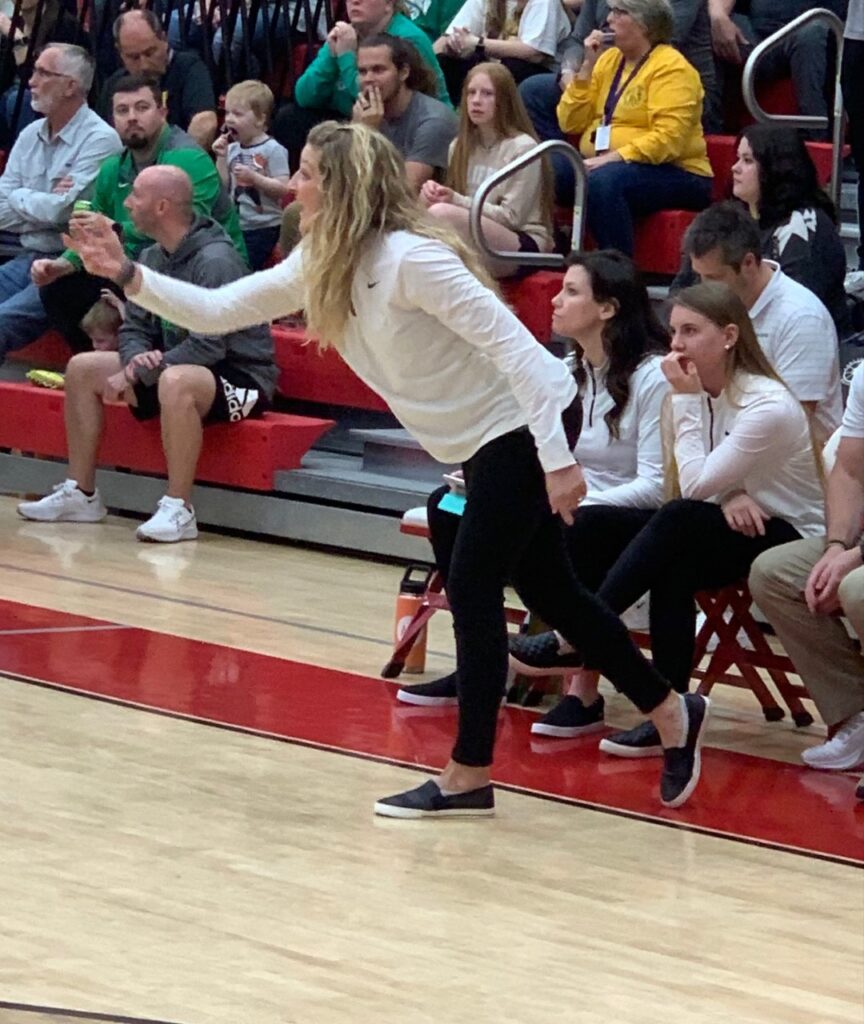 The Lady Cougars began to push back, as Reagan Brown hit a foul line jumper to make the score 17-10, capping a 5-0 run for Northview Academy.

Watson hit a three from the top of the key to stretch the Seymour lead to 20-10, forcing Shelley and Northview to call timeout.

White went to the line and converted a pair of free throws to make the score 20-12, but Schultz would answer with a layup to push the Lady Eagles’ lead back to double-digits.

Cummings made two free throws to give Seymour a 24-12 lead, followed by a Kelsey Cruz basket to make the score 26-12 with just over a minute left in the half.

Northview’s Brown made a layup with 47 seconds left to trim the Seymour lead to 26-14, but Watson would grab a rebound and get the putback with 20 seconds left, sending the Lady Eagles to intermission with a 28-14 lead. Seymour ended the half on an 8-2 run.

The second half would not go any better for the Lady Cougars, as shots that normally fall, weren’t falling, and before one could blink, Northview was down 34-14 with 4:55 left in the third quarter.

White converted to free throws for the Lady Cougars to make the score 34-16 and Leny Torres made a floater to cut the Northview deficit to 36-19 with 2:21 left in the third.

Seymour would take a 39-20 lead into the final quarter, as the Lady Eagles outscored Northview Academy 11-6 in a crucial third quarter for both teams. 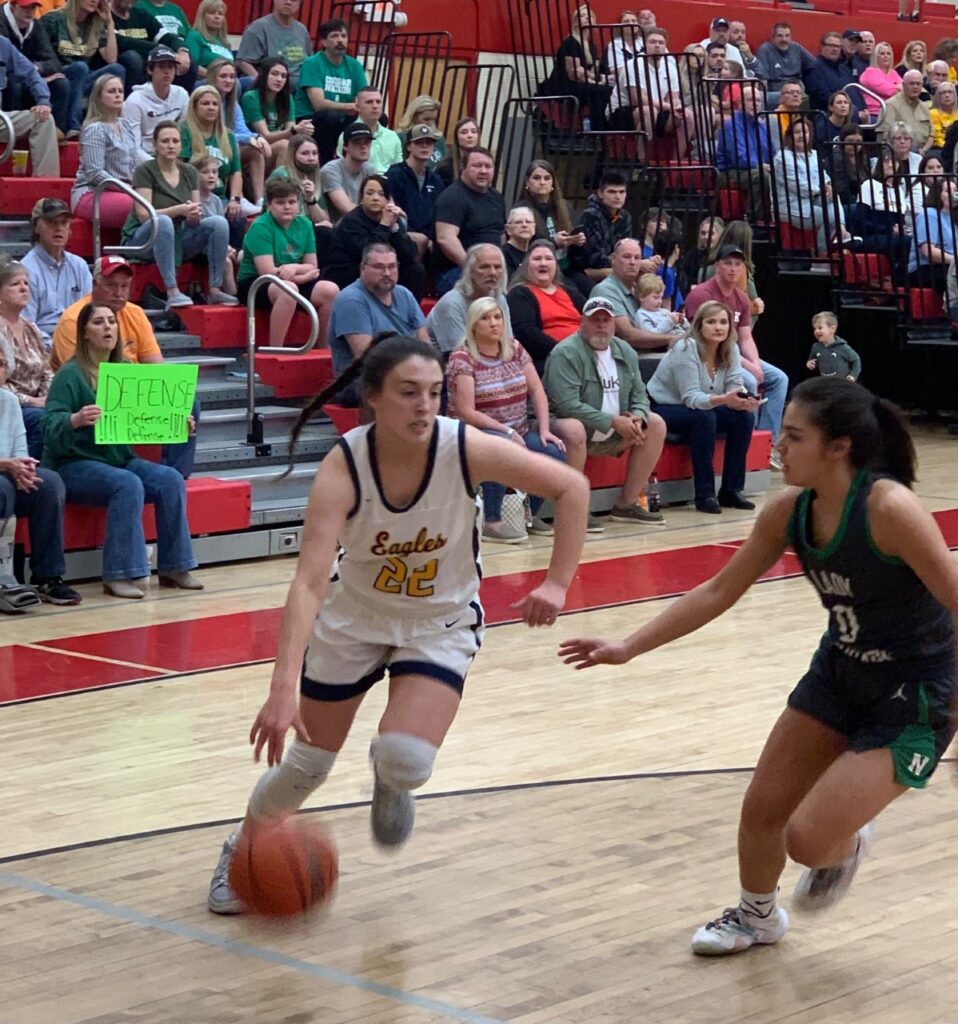 White hit a jumper early in the fourth quarter to make the score 39-22, but Seymour would go on a 6-0 from that point, capped by a pair of Brielle Turner free throws, which gave the Lady Eagles a 45-22 lead.

“I thought we started out and I thought did a really good job; we just didn’t hit shots,” Northview Academy coach Brooke Shelley said. “When you shoot 17-percent from the floor, and you shoot 4-percent from three, you’re not going to beat anybody. You’ve got to come out ready to knock down open shots and make big buckets in a big game. We just weren’t ready to do that, and Seymour came out and they were.”

It was the fourth time Seymour had faced Northview Academy and the fourth time the Lady Eagles had come away victorious. The first three matchups were close games, as Seymour won by single digits each time, but the fourth matchup was never really in doubt.

“They threw a new wrinkle at us that we hadn’t seen in the previous three games, and we were able just to weather the storm and make enough shots to put ourselves in position to win,” Hernandez said. “They went box-and-one with my point guard, Caiden (Russell), just to try and get her a little bit frustrated, but Jaden Cummings made some huge plays and Emma (Watson) made some big shots.”

“Caiden had really hurt us,” Shelley said about the prior three matchups. “She had been the most effective player offensively against us in the three games and we just said, ‘hey let’s come out here and see what they do and see how they respond.'” 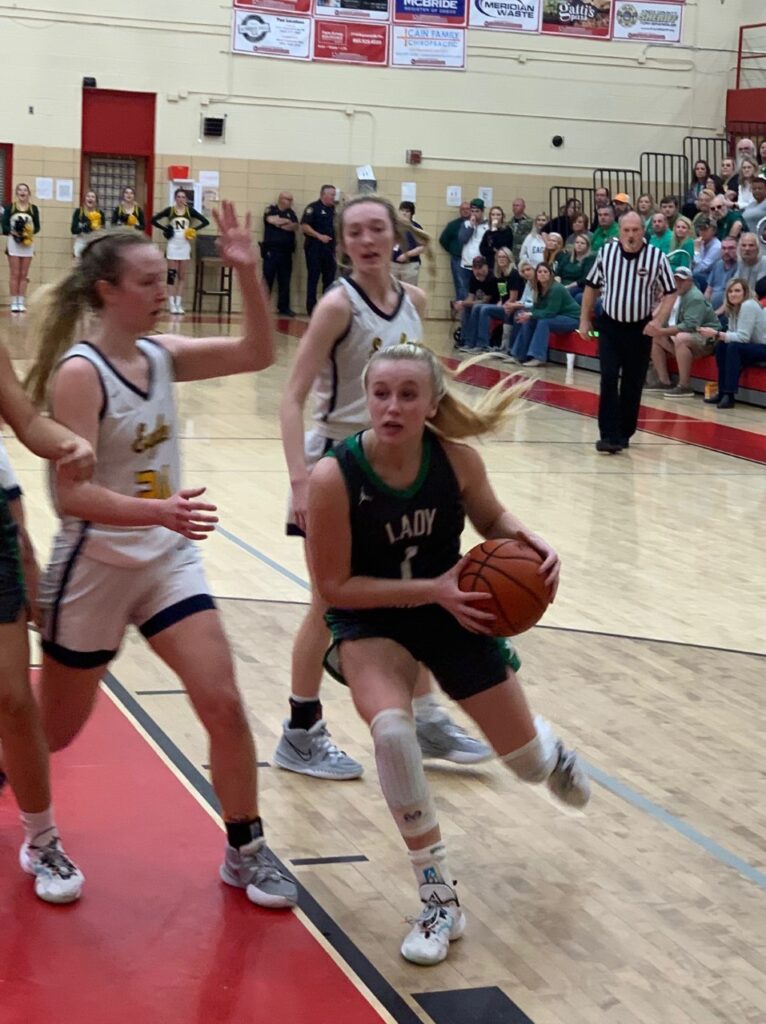 “I had Brielle (Turner) in foul trouble, (Kaylyn) Jarvis in foul trouble and then Kaylen Schultz,” Hernandez said. “Kelsey Cruz, whose probably played a total of 10 minutes in the last month, comes in and gets at least two or three rebounds, a blocked shot, and then she knocks down a layup in transition. I mean, that’s what we needed tonight to win, and I couldn’t be prouder of these kids. I’m just happy we’re in this situation. We control our destiny right now and it’s just up to us.”

Jordan White was the lone scorer in double-figures for Northview Academy with 11. Josie Horner finished with five points, while Reagan Brown added four.

Seymour (29-5) will host Greeneville (26-8) at 7 p.m. on Saturday night. The Lady Devils are coming off a 79-65 regional championship loss to Elizabethton.

Northview Academy (20-13) will travel to Elizabethton on Saturday night to face the Fighting Cyclones (24-6).