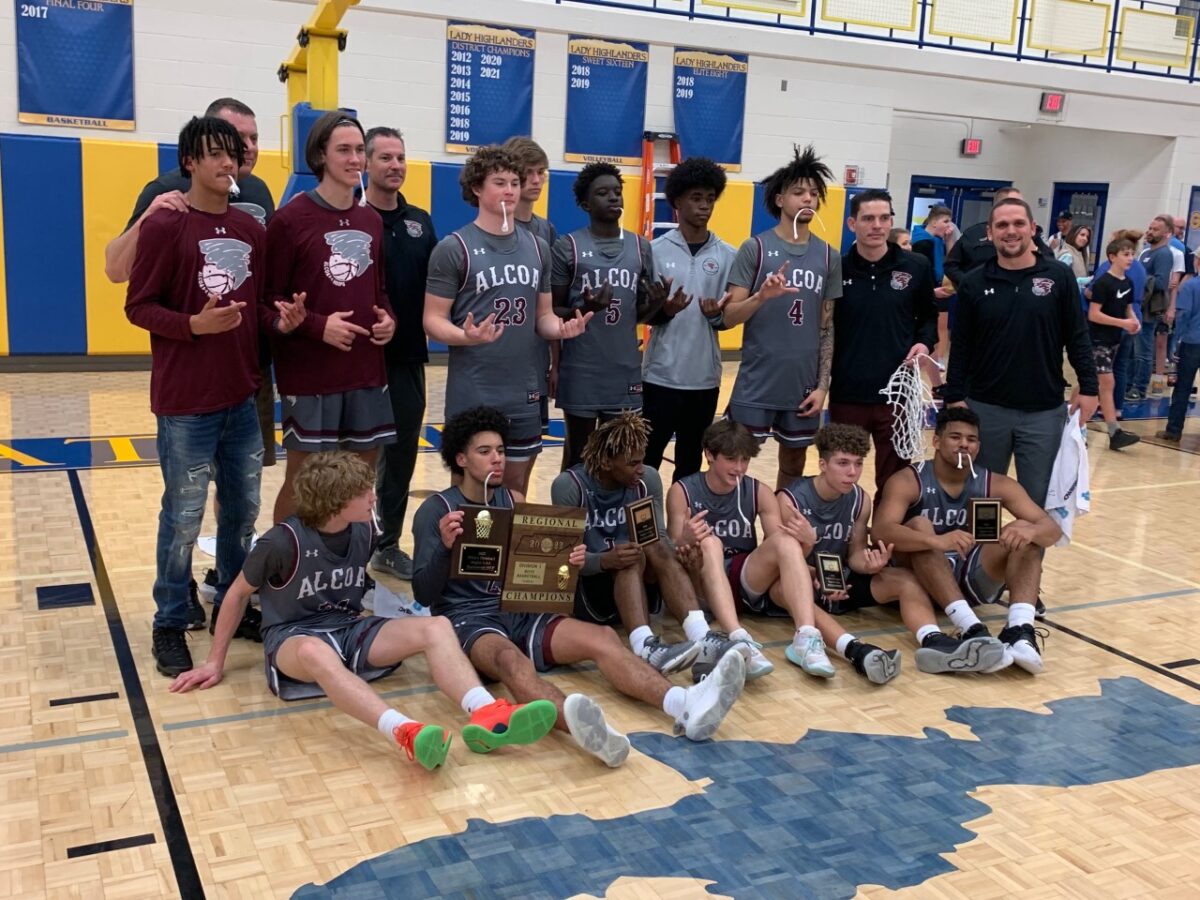 GATLINBURG – Eli Graf hadn’t attempted a shot for nearly 29 minutes on Thursday night, but with under three minutes remaining in the Class 2A Region Championship, the freshman hit a three to tie the game at 54-54 and then put Alcoa up 57-54 and ahead for good with under two minutes left with another triple. Freshman Eli Owens also pulled down crucial rebounds and made timely baskets throughout the game. 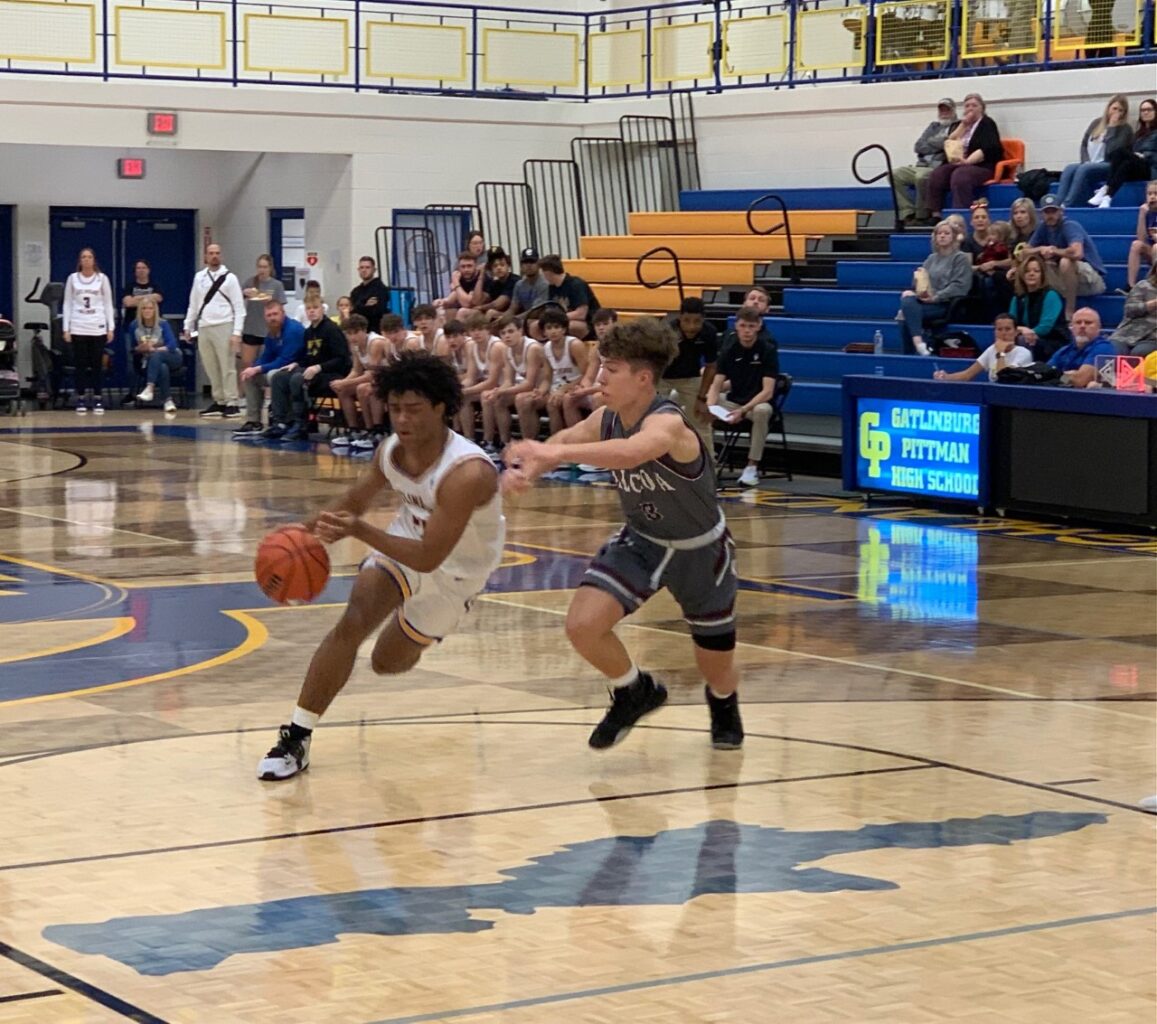 “Eli Graf hadn’t taken a shot all game and comes out and sticks two in that big moment, right there, unbelievable,” Alcoa coach Ryan Collins said. “That’s who our kids are. They’re just competitors and winners and we found a way for it to show up tonight. Our freshmen have been phenomenal all year. Sometimes that moment can be too big for young guys, but not those guys and I think that’s character.”

The Tornadoes would go on to celebrate the region title and cut down the nets on Gatlinburg-Pittman’s home court, as many of the Highlanders’ fans and players looked on almost in disbelief.

“I thought the difference was that their freshman post (Eli Owens) was more physical than our big guys and I thought he had a lot of big rebounds and second opportunities,” Gatlinburg-Pittman coach Rashid Moore said. “We weren’t a good version of ourselves and settled for bad shots on offense. You just control what you can control, and we’ve just got to keep fighting; it just didn’t fall the way we wanted it tonight.”

Alcoa’s Jahvin Carter scored a layup to give the Tornadoes an early 2-0 lead, but Gatlinburg-Pittman’s Carlos Orr responded with a spinning layup to tie the game at 2-2.

Terrence Dorsey banked a three on the other end for a 5-2 lead with 5:14 left in the first quarter. Another layup by Orr would make the score 5-4, before Jackson DeSear nailed a three to give the Highlanders a 7-5 lead.

Alcoa took a 9-7 lead when Elijah Cannon made a layup with just over four minutes remaining in the first. On the next Gatlinburg-Pittman possession, Orr caught a pass from Ty Glasper and was fouled under the basket while making a layup. The sophomore forward would convert the 3-point play to give the Highlanders a 10-9 lead. 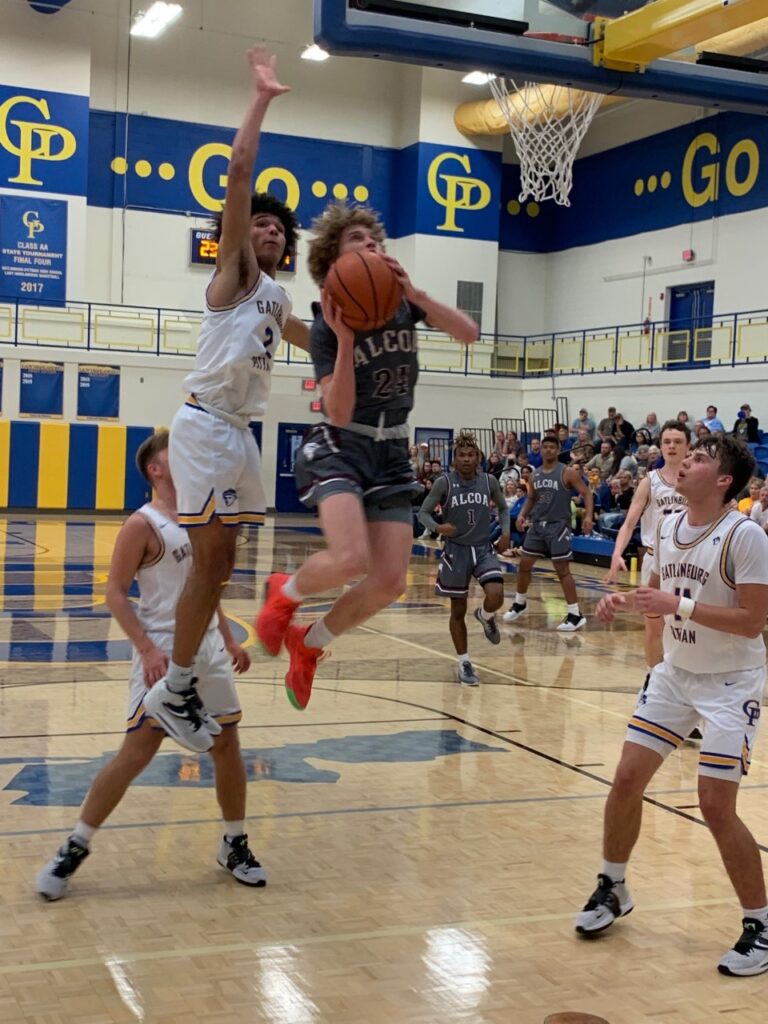 Alcoa’s Brady Haun (24) goes up for a layup, while Gatlinburg-Pittman’s Carlos Orr (2) tries to block the shot from behind. Photo by Brian Hamilton

Two consecutive baskets by Glasper gave the Highlanders a 15-11 lead with just over one minute left in the first quarter. Jordan Harris made a layup with 13 seconds left to close the gap to 15-14, but Glasper was fouled with 10 seconds left, making 1-of-2 free throws to make the score 16-14.

After the free throw, Dorsey was called for a technical foul. Instead of leaving the senior in the game, with the risk of getting a second technical, being ejected, and having to miss the substate game, Collins sent Dorsey to the locker room for the rest of the game.

“It was just a retaliation effort. He felt like he maybe got shoved and he pushed off back, but it is what it is,” Collins said. “We’d made up our mind that if it wasn’t a do-or-die, that we weren’t going to put him and our team in that situation to pick up a second (technical foul). I told him at halftime that I didn’t want to see his career be jeopardized this year with one more. He was not thrown out in any way, it was 100-percent my decision. Terrence found a way to support that, and I think some of the effort out on the court is how much our team cares for Terrence and wanted to win for Terrence and make it a special night.”

DeSear missed both technical free throws, but Houston Byrd nailed a three at the buzzer to give Gatlinburg-Pittman a 19-14 lead at the end of the first quarter.

A three by Carter would cut the Tornadoes’ deficit to 23-21, but a bucket by Glasper would give the Highlanders a 25-21 lead.

Carter made a layup to cut the Alcoa deficit to 25-23 with 3:07 left in the half, forcing Gatlinburg-Pittman to take a time out.

Orr fouled Brady Haun, who sank 1-of-2 from the line, making the score 31-24. Carter would go to the line on the next Alcoa possession, making both free throws to cut the Gatlinburg-Pittman lead to 31-26.

Cannon was fouled with 47 seconds left and made both free throws, pulling the Tornadoes to within 31-28. The sophomore would grab a loose ball and hit a layup at the buzzer to cap a 7-0 run and send Alcoa to the intermission trailing just 31-30. 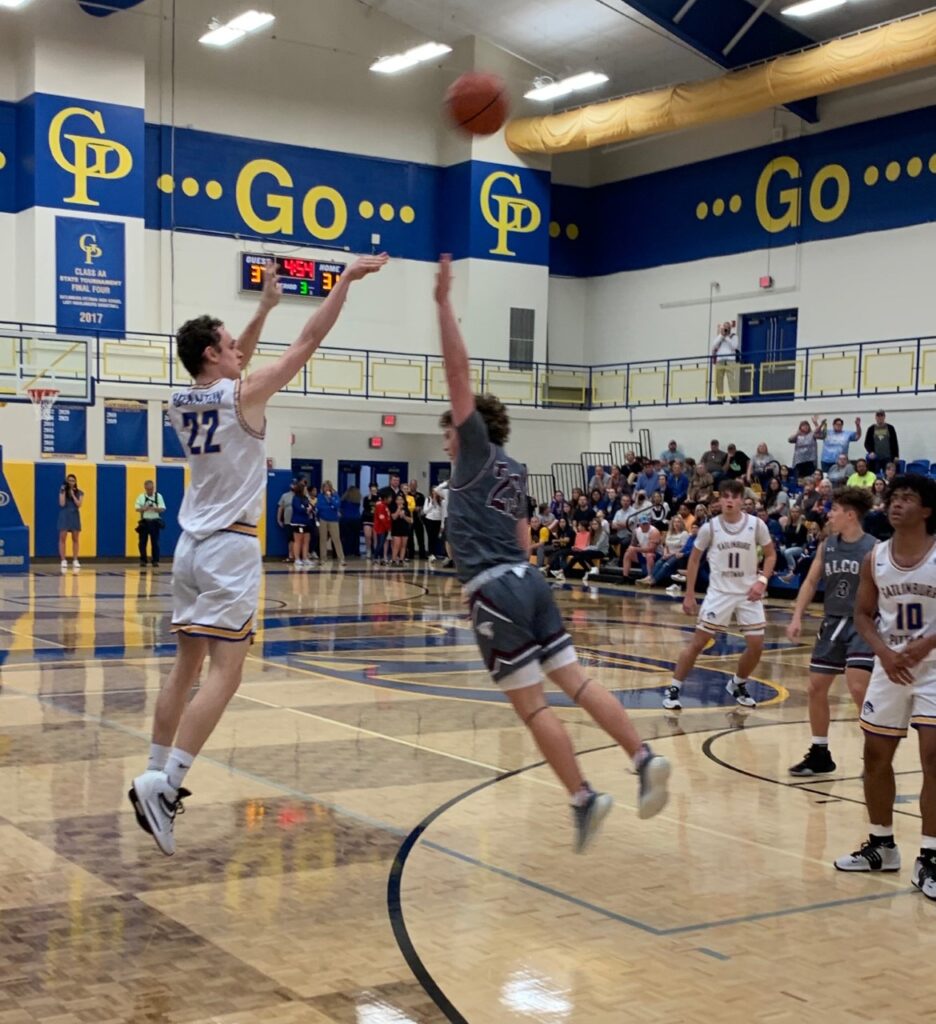 The Tornadoes kept the momentum going in the third quarter, as Carter was fouled on a layup and converted the 3-point play to put the Tornadoes ahead 34-31.

A three by Carter stretched the Alcoa lead to 37-31, but Gatlinburg-Pittman’s Grady Branton hit a three to pull the Highlanders to within 37-34 with 4:41 left in the third.

A layup by Harris gave the Tornadoes a 40-34 lead, but Glasper was fouled on a basket with a chance at a 3-point play on the other end. The freshman missed the foul shot, leaving Alcoa with a 40-36 lead.

Branton grabbed a rebound and scored inside, followed by DeSear backing down a defender and scoring, tied the game at 40-40 with just under two minutes left in the third quarter.

Orr pulled down a board and scored on the next offensive possession by the Highlanders, capping off a 6-0 Gatlinburg-Pittman run, making the score 42-40.

The Tornadoes retook the lead shortly after, as Cannon converted a 3-point play, giving Alcoa a 43-42 advantage. The Highlanders would answer when Orr corralled a rebound and put it back in, making the score 44-43 with 35 seconds left int he third.

Glasper scored on a fastbreak layup to give Gatlinburg-Pittman a 46-43 lead, but Carter would beat the buzzer with a layup, trimming the Highlanders’ lead to 46-45 after three quarters.

Harris was fouled on a basket by DeSear and had an opportunity for a 3-point play, but missed the foul shot, with Alcoa clinging to a 47-46 lead early in the fourth quarter.

A Glasper layup would put the Highlanders back in front 50-49, as the game was looking to come down to the final possession.

Byrd fouled Alcoa’s Harris on a layup and the junior made both free throws, putting the Tornadoes back in front 51-50. Glasper responded, however, with an up and under layup, as the tilt went back to Gatlinburg-Pittman, at 52-51 with 4:24 to go.

Glasper found DeSear for a basket to extend the Highlanders’ lead to 54-51. It was at this point that Alcoa relied on an unsung hero to pull the Tornadoes through in the championship game.

Freshman Eli Graf, who hadn’t attempted a shot all game, stepped up and hit a 3-pointer to tie the game at 54-54 with 2:25 remaining. Graf would nail another three on the next possession, putting Alcoa in front 57-54 with just 1:25 left in the game.

Harris hit a layup to give the Tornadoes a 59-54 lead with 47 seconds remaining. Carter was sent to the line on the next possession, making 1-of-2 to increase Alcoa’s lead to 60-54.

Owens hit two free throws in the waning seconds to put the Tornadoes ahead 62-54, but Branton would make a buzzer-beating layup as Alcoa began to celebrate its district championship on the court. 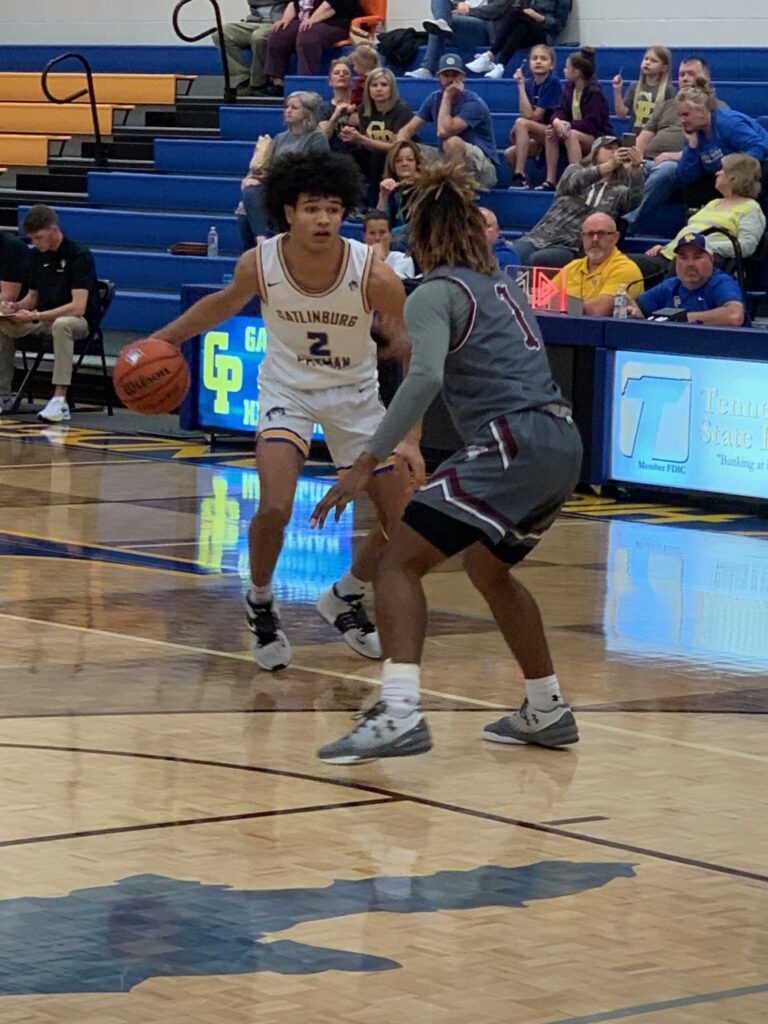 “Words can’t really describe how I feel about this team and what they just did out on the floor tonight,” Collins said. “The thing about it all that kind of makes it extra special is that it’s been a difficult season in a lot of regards. A lot of highs, a lot of lows and a lot of difficult moments, but I thought the whole time that we just found a way to stay the course.”

Ty Glasper led all scorers with 16, while Gatlinburg-Pittman’s Carlos Orr finished with 15. Jackson DeSear added nine for the Highlanders.

“This is ultimately what you play for,” Collins said. “Our kids are competitors and they wanted one more opportunity at Gatlinburg-Pittman. They have kicked our tails, point blank, twice in a row, coming up here, so we were excited to get it and to get it up here (at Gatlinburg-Pittman). I thought the fight out of all of them was remarkable.”

Alcoa (17-17) will host Tyner Academy (22-10), as the Rams were upset by Brainerd Thursday night in the substate game. Gatlinburg-Pittman will have to go on the road to win at Brainerd (13-11) to advance to Murfreesboro.

“All you can ever ask for is a shot and now we have a shot,” Collins said regarding the substate contest. “It just comes down to another one of those 32-minute entities that I’ve talked about, and we’ve got to do what’s necessary to win the game. It’s huge to be playing at home (in the substate game) and huge to be playing in front of our community. I know our community is going to show up in a big way. Tyner is a very good basketball team and we’re going to have our hands full, but we’re excited. I think we’re playing our best basketball right now and I think we’re kind of playing for each other and really believing in each other and that’s what you want this time of year.”

The substate matchups will take place on Monday night at 7 p.m.