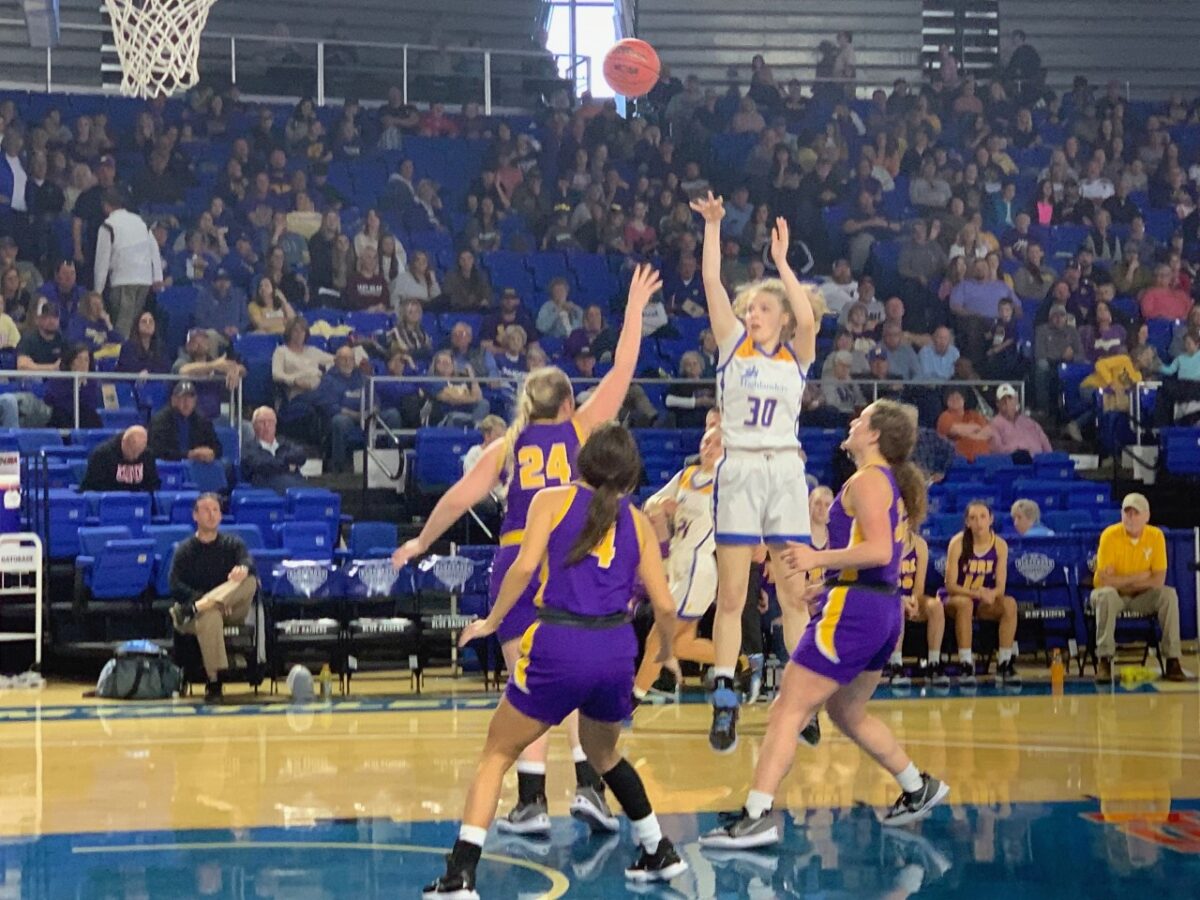 MURFREESBORO – Sometimes a bad bounce can determine the outcome of a basketball game or be the difference between rewriting a program’s history. The Gatlinburg-Pittman players and fans saw that first-hand on Thursday night, as the Lady Highlanders’ star center Maddy Newman saw her layup bounce off the front rim with a chance to send GP to its first championship game in school history. 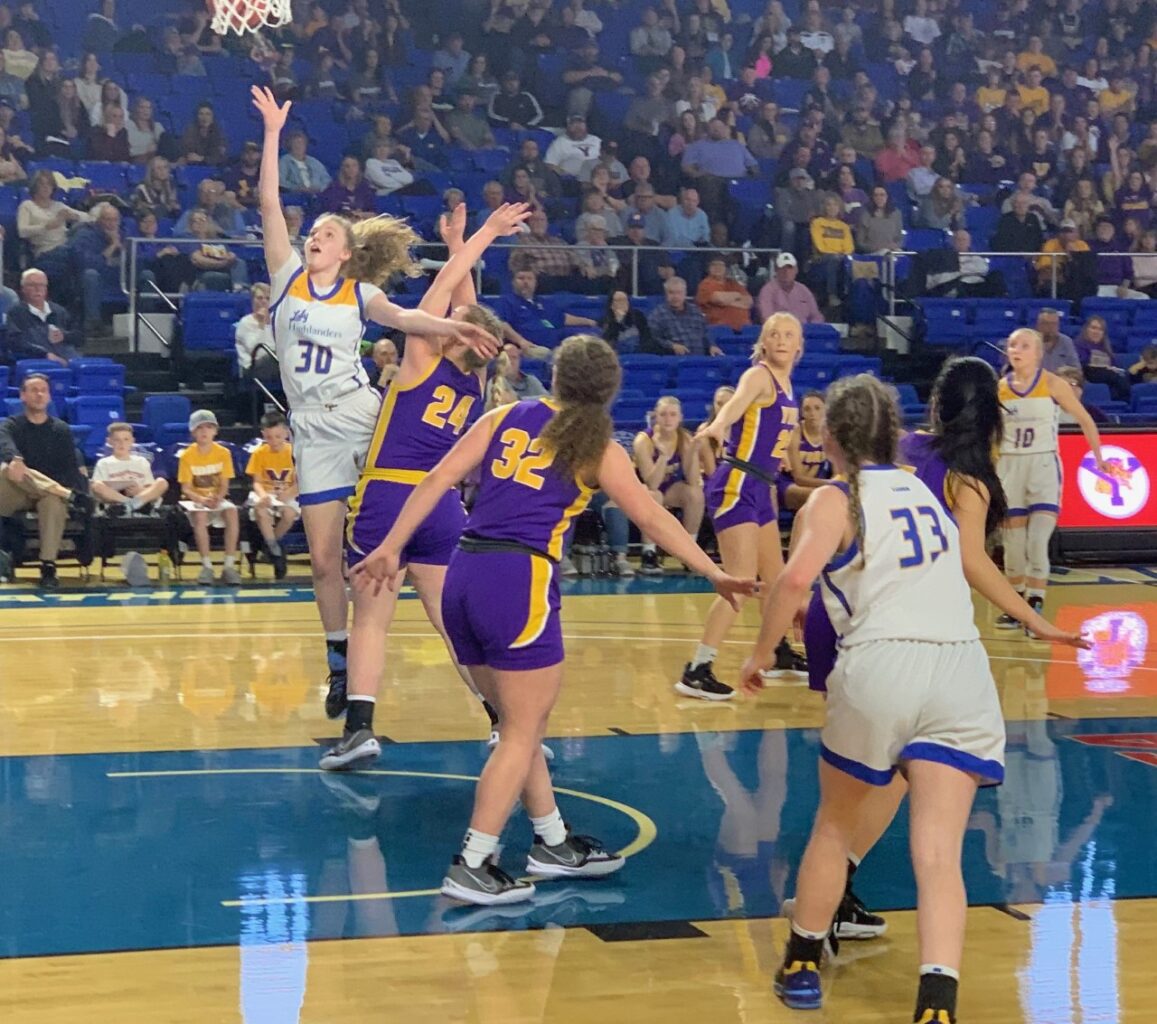 Gatlinburg-Pittman’s Maddy Newman goes up for a layup over York Institute’s Ellen Lefflew (24) during the Lady Highlanders’ 66-65 overtime loss. Newman finished with a game-high 31 points and nine rebounds. Photo by Brian Hamilton

“I didn’t know how much time I had left, so I just kind of tried to get it up there, but I missed it,” Newman said.

Newman didn’t sulk after missing the potential game winner, as the sophomore came out in overtime and scored the first three baskets for the Lady Highlanders.

“You’ve just got to rub off the mistakes and keep playing, no matter what,” said Newman.

The game was tied at 54-54, following a Josie Linder layup with seven seconds remaining, and Gatlinburg-Pittman managed to get the ball to Newman right under the goal, but the shot just didn’t fall, sending the game to overtime, where the Lady Highlanders would ultimately fall 66-65.

“Basketball is a four-quarter sport and I felt the first half we didn’t really come out to play,” Gatlinburg-Pittman coach Katie Moore said after the game. “I thought we came out trying not to lose instead of coming out to win and we just sat around and waited to see what York (Institute) was going to do to us instead of doing what we do, and I thought in the second half we played GP basketball and you could tell a huge difference. You can’t take possessions off early in the game and expect to be able to finish on this stage in a Final Four game.”

Gatlinburg-Pittman had another opportunity to close the game in overtime, leading 65-62 with 28 seconds left, but the Lady Highlanders turned the ball over on the inbounds, following a layup by York Institute’s Reese Beaty to make it a one-point game. Sage Smith would hit a floater with seven seconds left to give the Lady Dragons the win, as Lily Stinnett’s half-court shot at the buzzer fell short.

It was Gatlinburg-Pittman’s second Final Four in school history and returning sophomores Maddy Newman and Lily Stinnett said this would be extra motivation going forward.

“I think we proved a lot of people wrong, making it here, because literally nobody thought we were going to be able to pull it off,” Newman said. “I think it helps us out and gives us more experience, because last year we got put out a little bit early, so I think that’s going to help us grow as a team for the ones that are coming back.”

“We’ll learn a lot from our mistakes late in the game and try to come back next year and prove people wrong,” Stinnett said. 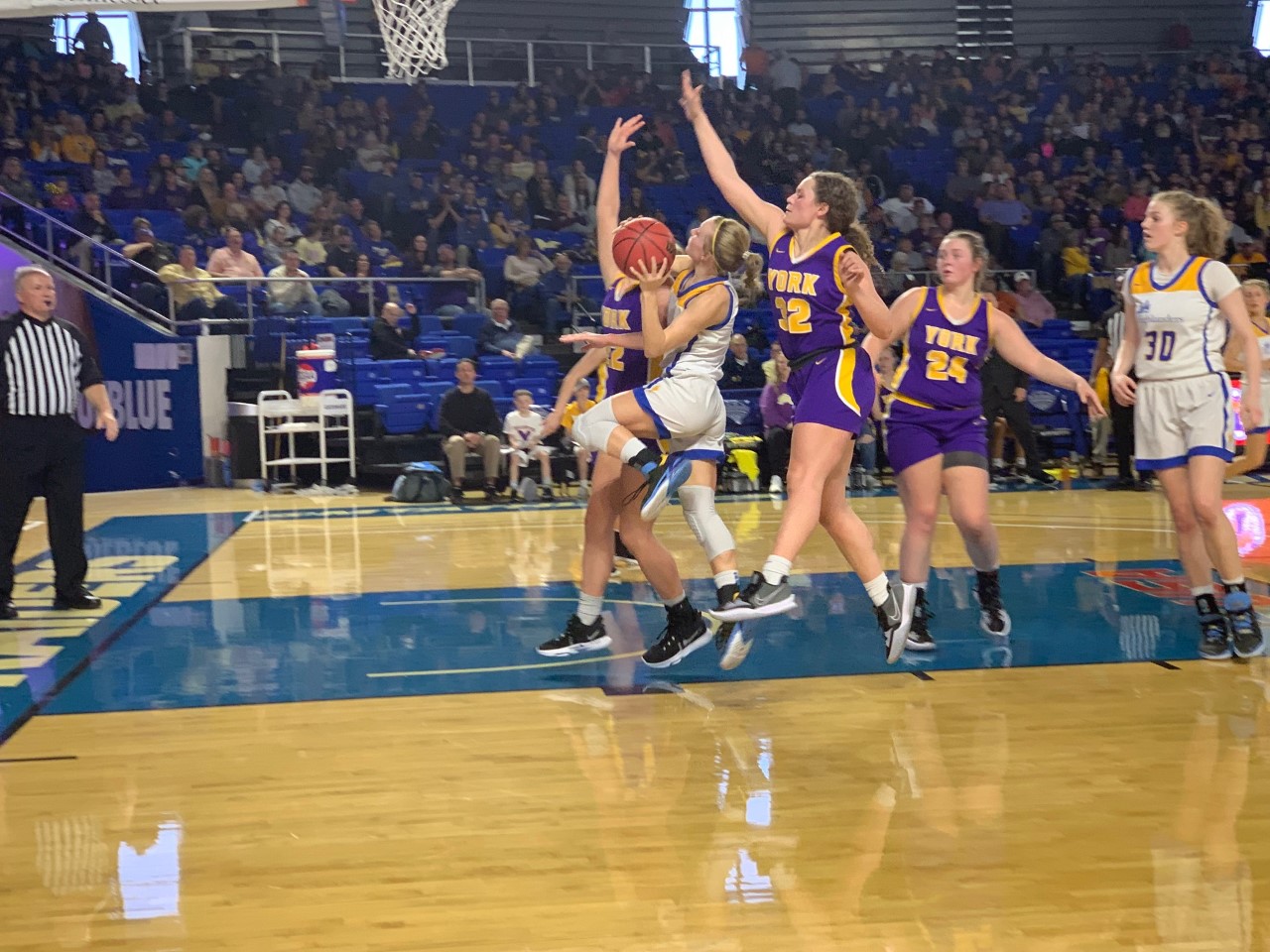 Lily Stinnett goes up for a layup, as York Institute’s Gabrielle Beaty (32) tries to block the shot from behind. Photo by Brian Hamilton

Gatlinburg-Pittman got off to a hot shooting start, as Kayle Yates and Leah Stinnett hit threes to give the Lady Highlanders an early 6-0 lead.

York Institute’s Sage Smith would answer with a 3-pointer of her own to make the score 6-3 and a jumper by Ellen Leffew cut the Gatlinburg-Pittman lead to 7-5 with 5:35 left in the first quarter.

Two free throws by Leffew would give the Lady Dragons an 8-7 lead with just over three minutes remaining in the third.

Gabrielle Beaty hit a layup to extend the York Institute lead to 10-7 with 2:41 left, as the Lady Dragons capped a 7-0 run.

Kayle Yates hit a layup to tie the game at 10-10 with just over one minute left in the first period and Lily Stinnett then made a layup to put the Lady Highlanders back in front 12-10 with 27 seconds left.

Gatlinburg-Pittman ended the first quarter leading 12-10 and in the midst of a 5-0 run.

Emy Crabtree put York Institute back ahead 13-12 on a three with 6:26 left in the second quarter, followed by a three by Beaty to make the score 17-12.

A three by Sage Smith stretched the Lady Dragons’ lead to 20-12 with 4:09 remaining in the half, as York Institute answered Gatlinburg-Pittman’s 5-0 run with a 10-0 run.

The Lady Dragons took a nine-point lead (22-13) on a pair of Crabtree free throws, but Maddy Newman rebounded a Yates miss and made a layup to cut the Lady Highlander deficit to 22-15 with just over three minutes left in the first half.

Gatlinburg-Pittman later cut the lead to 26-20 on a Graycee Valentine 3-pointer with just over one minute remaining, but a layup by Leffew with 16 seconds left sent the Lady Dragons to the intermission leading 28-20.

Maddy Newman had just three points at halftime, prompting Moore to challenger her to be more aggressive in the locker room at intermission.

“I thought early on she wasn’t knocking it down and it was kind of getting in her head,” Moore said. “We talked to her a little bit at halftime about it and I’m pretty sure I yelled at her at halftime. She did a great job of kind of changing her mentality and knowing this team needs her to score, which is what she’s done for us all year and she stepped up to the challenge and did that for us and, of course, I thought our guards did a great job of getting her the ball when she was open.”

“I think I tried to force a lot of shots and I think I just kind of relaxed a little bit and just played my game (in the second half),” Newman said. 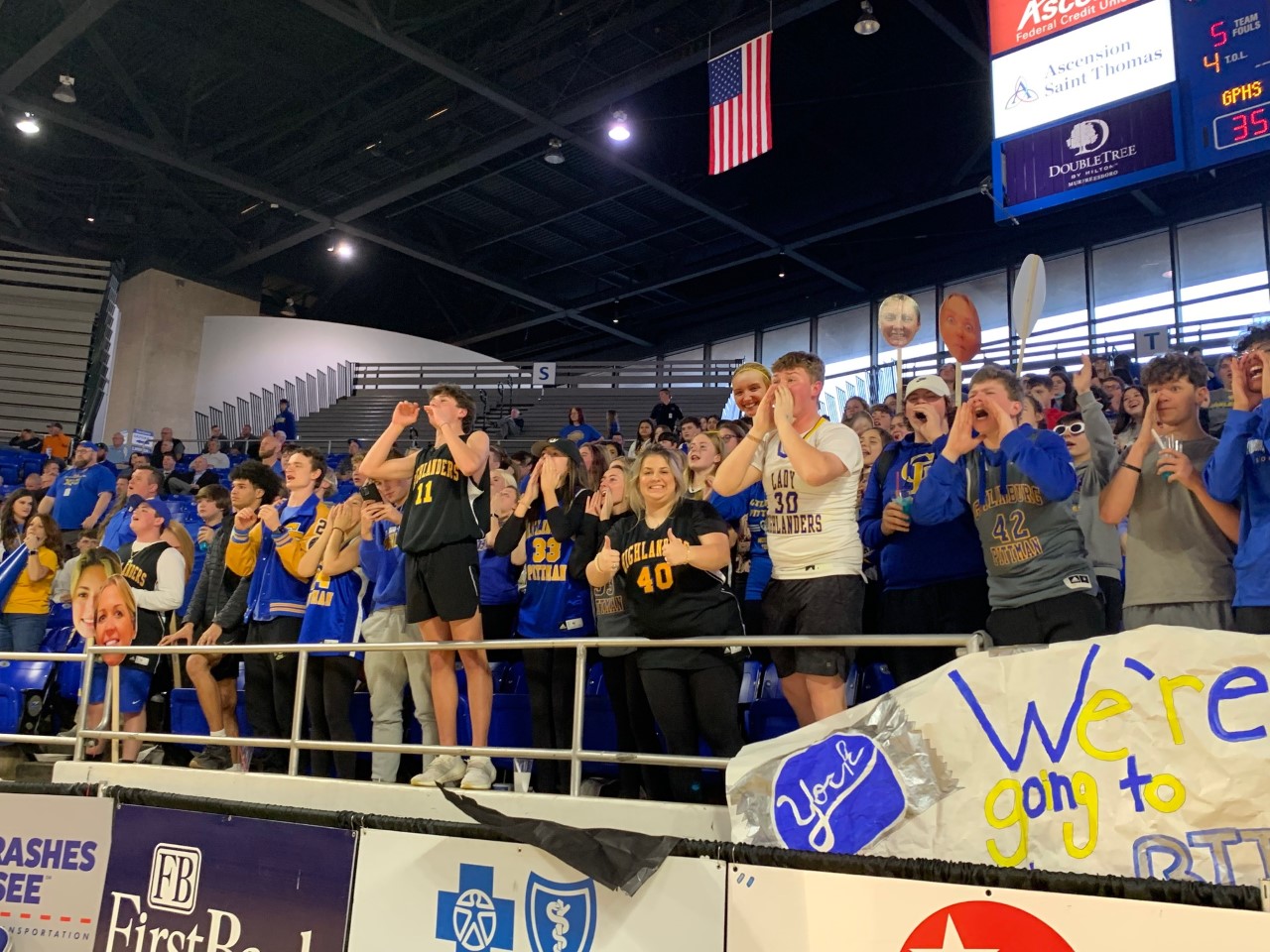 The Gatlinburg-Pittman fans came out in full force to root on their Lady Highlanders in the Final Four Thursday evening. Photo by Brian Hamilton

A layup by Beaty, followed by two free throws would stretch the Lady Dragon lead back to 33-25 with five minutes left in the third.

A Newman jumper would cut Gatlinburg-Pittman’s deficit to 35-29 with 4:36 left in the third quarter to spark a Lady Highlander run. The sophomore center made a layup and was fouled to make the score 35-33 and a layup by Leah Stinnett would pull Gatlinburg-Pittman to within one (36-35) with 1:41 left in the quarter.

Newman sank two free throws with under one minute left, as the Lady Highlanders took a 37-36 lead into the fourth quarter, as Gatlinburg-Pittman took its first lead since 12-10 and wrapped up the quarter on a 10-1 run.

The Lady Highlanders came out revitalized in the fourth quarter, as Newman scored a basket and the foul to stretch their run to 13-1 and take a four-point lead (40-36).

Two free throws by Leffew would snap the Gatlinburg-Pittman run and cut the Lady Dragons’ deficit to 40-38. A layup by Beaty tied the game at 40-40 with 6:45 left in the fourth quarter.

The two teams traded leads throughout the fourth quarter, but a layup by Newman gave the Lady Highlanders a 50-47 lead with just under three minutes remaining.

Four consecutive points by Leffew put York Institute back in front 51-50 with 1:57 to go, but a layup and foul by Newman gave Gatlinburg-Pittman a 54-52 lead with 17 seconds left in the game.

Josie Linder hit a layup with seven seconds left to tie the game at 54-54 and the Lady Highlanders were able to get the ball to Newman under the basket for a game-winning 2-foot layup, but the shot rolled off the front rim, sending the game to overtime at 54-54.

Gatlinburg-Pittman began the overtime period by pounding the ball inside to Newman, as York Institute’s two post players were both fouled out, but the problem was that the Lady Highlander star had four fouls herself, which made it tough to remain aggressive defensively and stay in the game.

Newman scored a layup to put Gatlinburg-Pittman ahead 56-54 on the first possession of overtime, but Reese Beaty came down and hit a jumper to tie the game at 56-56.

The Lady Highlanders went inside to Newman again for a layup and a 58-56 lead, but Laci Patton rebounded a missed Crabtree three and put it back up to tie the game at 58-58 with 2:44 left in overtime.

Gatlinburg-Pittman would take a 63-60 lead when Leah Stinnett hit a layup and was fouled with 1:15 left. Reese Beaty scored a basket to pull the York Institute to within 63-62 with 53 seconds remaining. 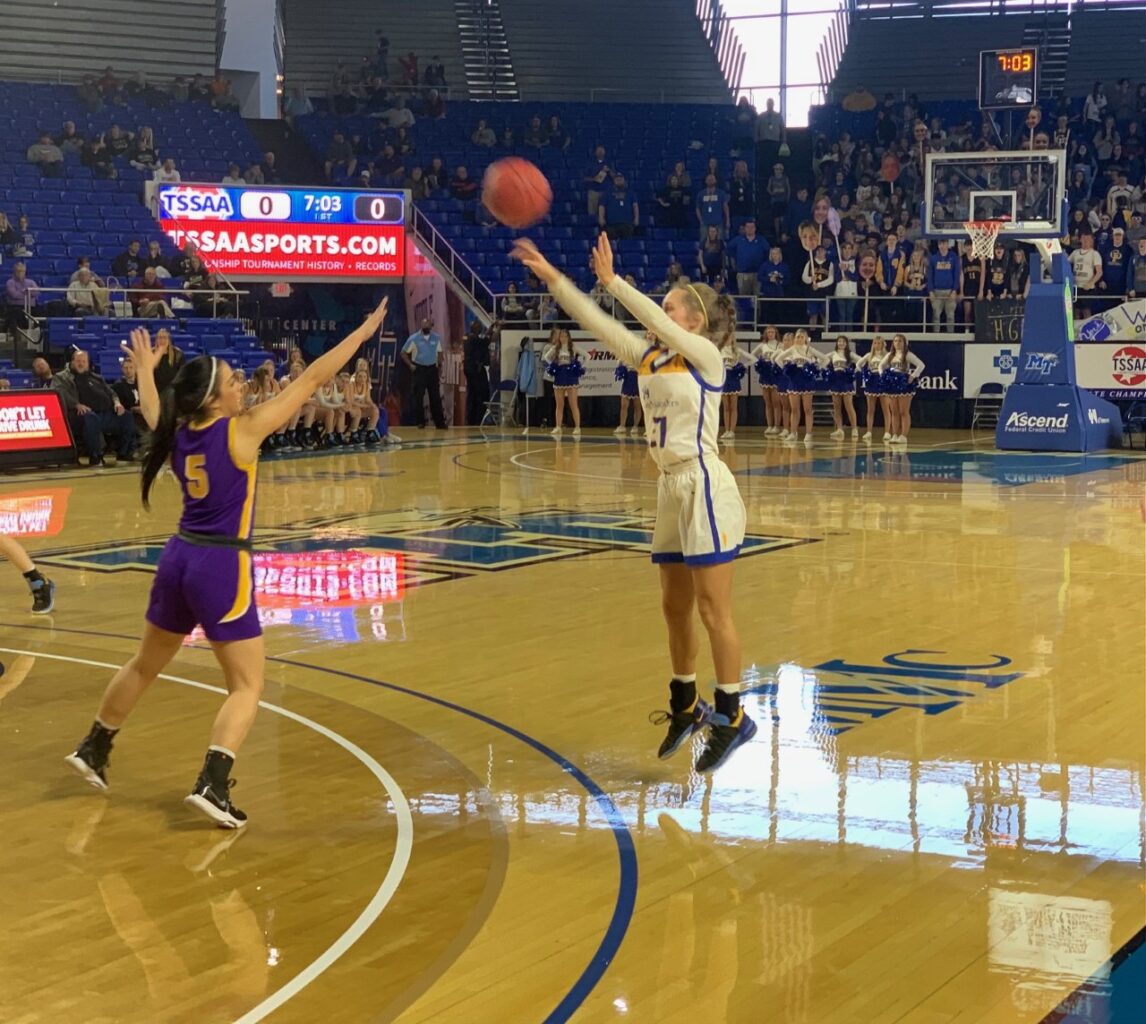 Gatlinburg-Pittman’s Kayle Yates (21) attempts a three while guarded by Sage Smith. The senior finished with seven points during the contest. Photo by Brian Hamilton

The Lady Dragons were forced to foul Kayle Yates with 26 seconds remaining and the senior stepped to the line and knocked down both free throws for a 65-62 lead, as it looked like the Lady Highlanders would be advancing to the final, as long as they defended the 2-point line and hit their free throws.

Reese Beaty hit a layup with 21 seconds left to make the score 65-64, but Lily Stinnett overthrew Molly McCarter on the inbounds pass, turning the ball over to York Institute with a chance to win the game.

“I regret not calling a timeout when Lily threw it out of bounds,” Moore said after the game. “I saw she was struggling and I knew we only had one timeout and I was thinking I was going to need it for something else, but I probably should have just used it then and they wouldn’t have gotten the possession back.”

Sage Smith got the ball in the corner and went toward the rim, making it past the outstretched arms of Newman for a floater, giving the Lady Dragons a 66-65 lead with three seconds left.

Moore called timeout to draw up a play, but the Gatlinburg-Pittman was unable to get a long pass to Newman and inbounded to Lily Stinnett, who had to heave up a shot from half-court, which fell short, ending the Lady Highlanders’ season.

“We were actually trying to go long to Maddy, but the long wasn’t there and obviously, if we would have known that we would have done something different. I had used all my timeouts, so we didn’t necessarily have a chance,” Moore said. “We were lucky we were able to get back in it from that 8-point deficit at the half and to be able to go into overtime without their two bigs, that was kind of on our side, but just not being able to take care of the ball toward the end of the game was huge.”

Maddy Newman led all scorers with 31 points and nine rebounds, while Leah Stinnett finished the game with 16 points. Lily Stinnett and Kayle Yates each added seven points apiece for the Lady Highlanders.

York Institute was led by Ellen Leffler’s 19 points, while Gabrielle Beaty added 14 for the Lady Dragons.

Gatlinburg-Pittman’s historic season ends with a record of 28-10, while York Institute (26-6) will face Westview (30-2) in the state championship at 11 a.m. on Saturday.