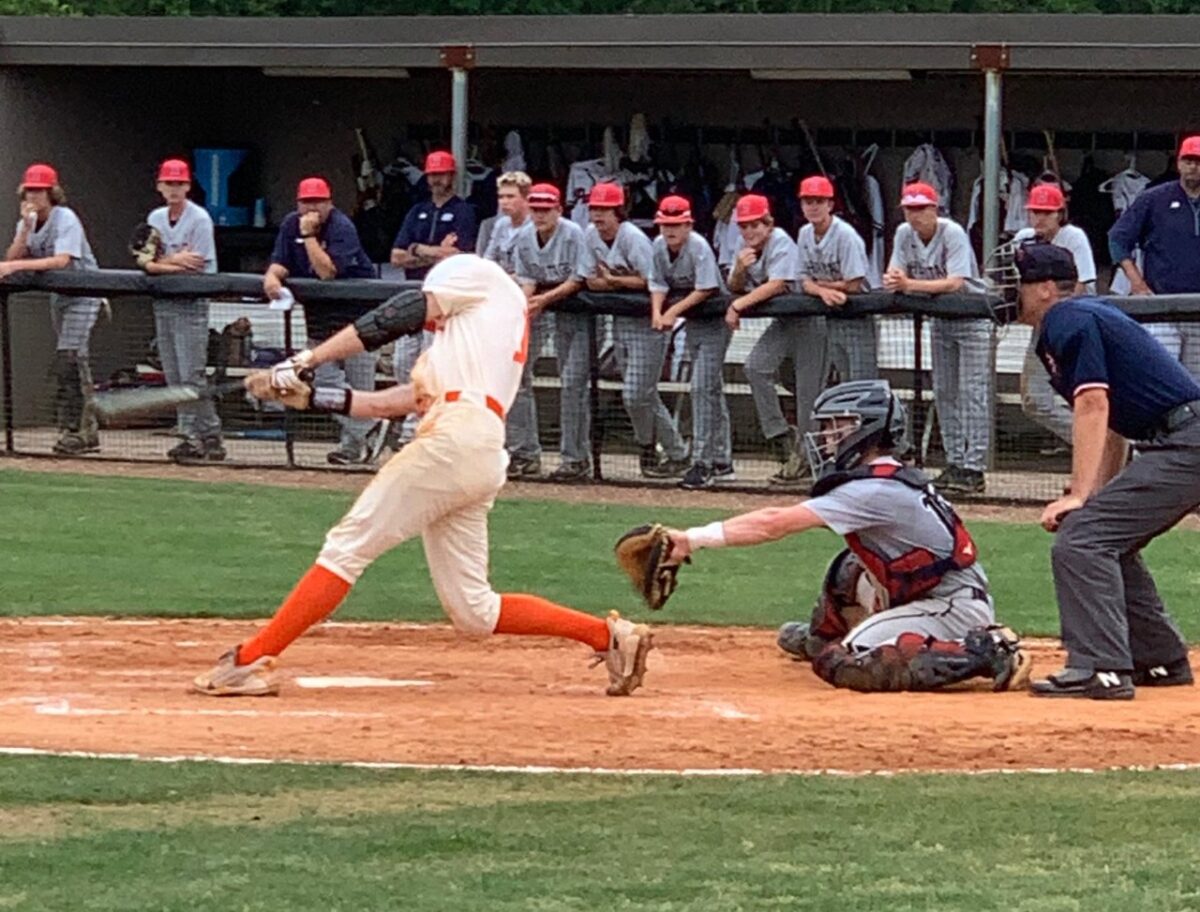 SMYRNA – It looked like business as usual for Pigeon Forge on Tuesday evening, as the Tigers built an early 5-0 lead in the second inning and pulled starting pitcher Riley Franklin, who was awarded Tennessee Mr. Baseball on Monday night. 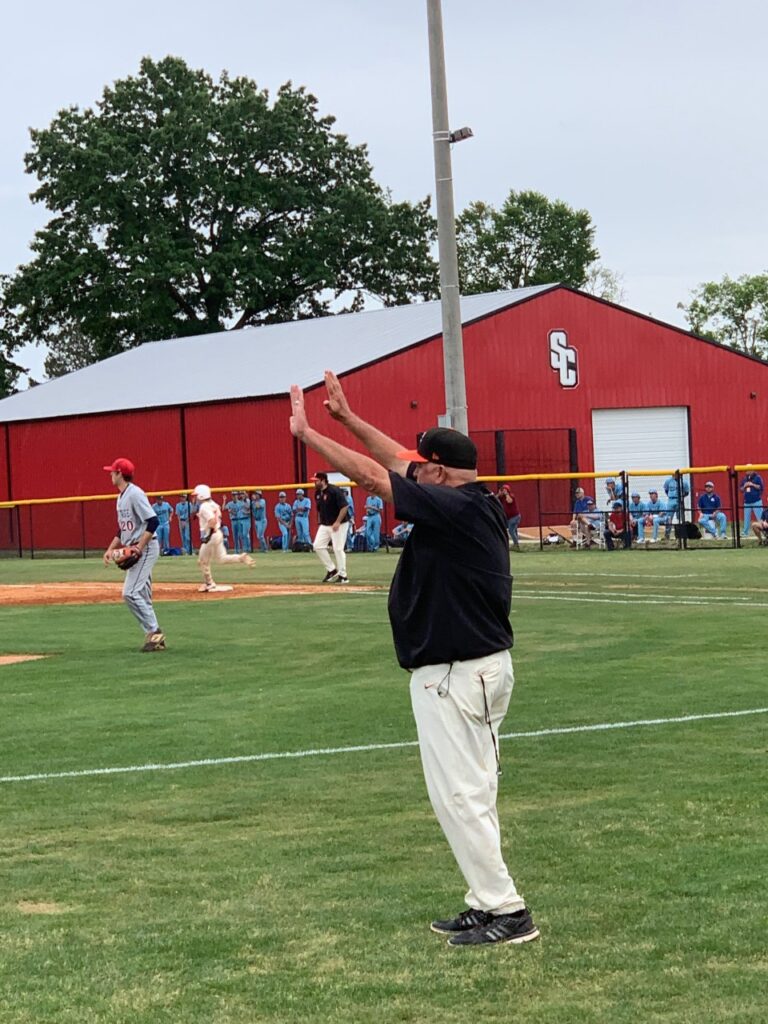 Pigeon Forge coach Mike Guinn signals for runners to hold up at the bases during the Tigers’ 8-6 win over White House Heritage at the state tournament Tuesday evening. Photo by Brian Hamilton

“It’s the state tournament,” Pigeon Forge coach Mike Guinn said. “We’re trying to use some strategy to win these games to be able to continue to have what we need to move through and there’s a little strategy involved, but they did a good job. (White House) got some key hits and we felt like we could still get them out right there and we did.”

Kevin Fernandez got things started with a single in the top of the first, driving home Dylan Loy for a 1-0 lead with two outs. Trevan Myers then hit a single on a line drive to right field, sending Fernandez home for a 2-0 advantage.

Franklin struck the next three White House batters out swinging, sending the Tigers to the second inning ahead 2-0.

Bryce Effler hit a double on a line drive to center field, as Ben Archer, Tyson McFall and Riley Franklin all scored to take a 5-0 lead in the top of the 2nd inning.

The score would remain 5-0 until the bottom of the third, as White House’s Justin Smith singled on a line drive to score Jordan Myers and pull the Patriots to within 5-1.

Effler then scored on a sacrifice fly to center field in the top of the fourth inning to make the Tigers’ lead 6-1, as Loy scored. Pigeon Forge added another run in the top of the 5th when Conner Catlett singled on a line drive to score Mikey McCarter for a 7-1 advantage.

The Tigers’ last run came in the top of the 6th, as Fernandez hit a double to send Riley Franklin home for an 8-1 lead.

Things got a little dicey in the bottom of the 7th, however, as Ty Lopez grounded out, but Cayden Waggoner was able to score on the play, cutting the Pigeon Forge lead to 8-2.

Effler struck out Cooper King looking for the second out and it looked like the Tigers were about to get out of the inning with a comfortable win.

It was anything but comfortable, however, as Matthew Kidwell came up to bat and hit a double to right field to score Myers and Smith and cut the Pigeon Forge lead in half at 8-4. 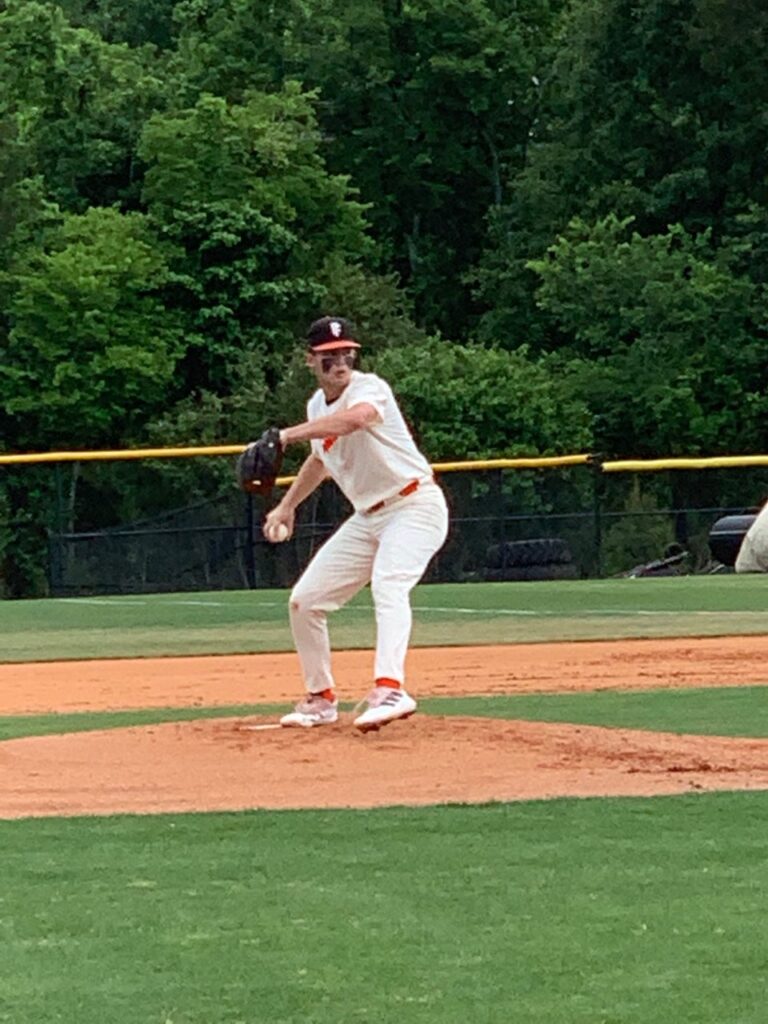 Tyler Zeligman then grounded into a fielder’s choice to score A.J. Lopez, making the score 8-5. Caiden Rains then followed that with a line drive to center, scoring Kidwell to cut the Tigers’ lead to 8-6.

Pigeon Forge then pulled Effler for Nicholas Shaw and then sent 2021 Mr. Baseball Dylan Loy into the bullpen, as disaster appeared on the horizon.

“If anything happens here, be ready,” Guinn said to Loy as he headed to the bullpen.

Waggoner flew out to first baseman Riley Franklin on the next at bat, however, ending the scare for Pigeon Forge.

“He was in the bullpen,” Guinn said of Loy after the game. “I was hoping I wouldn’t have to (bring him in). I didn’t really think about it much.”

Tyson McFall earned the win for the Tigers, as the junior entered the game for Franklin in the second inning and allowed just one run on three hits and striking out three during two and one-third innings.

Effler, Kaden Stinnett and Nick Shaw all came in the game for pitching relief, with Shaw recording the final out. Starting pitcher Riley Franklin surrendered no runs on no hits, while striking out three in one inning.

“Thats exactly the way we wanted to come out (with our pitching),” Guinn said. “We really came out better than we wanted to come out because we didn’t plan on throwing Bryce and he pitched two and one-third, I think. We came out good, but hey, tomorrow is a new day. You’ve got to play one game at a time and move on and that’s what we’ll do.”

Johnathan Mooney took the loss for White House Heritage, allowing eight runs on 10 hits and striking out six during five and two-thirds innings.

Pigeon Forge finished the game with 10 hits, as Conner Catlett, Trevan Myers and Kevin Fernandez each recorded multiple hits for the Tigers with two apiece.

“We’re looking forward to tomorrow and we’ll come out and play another game,” said Guinn.