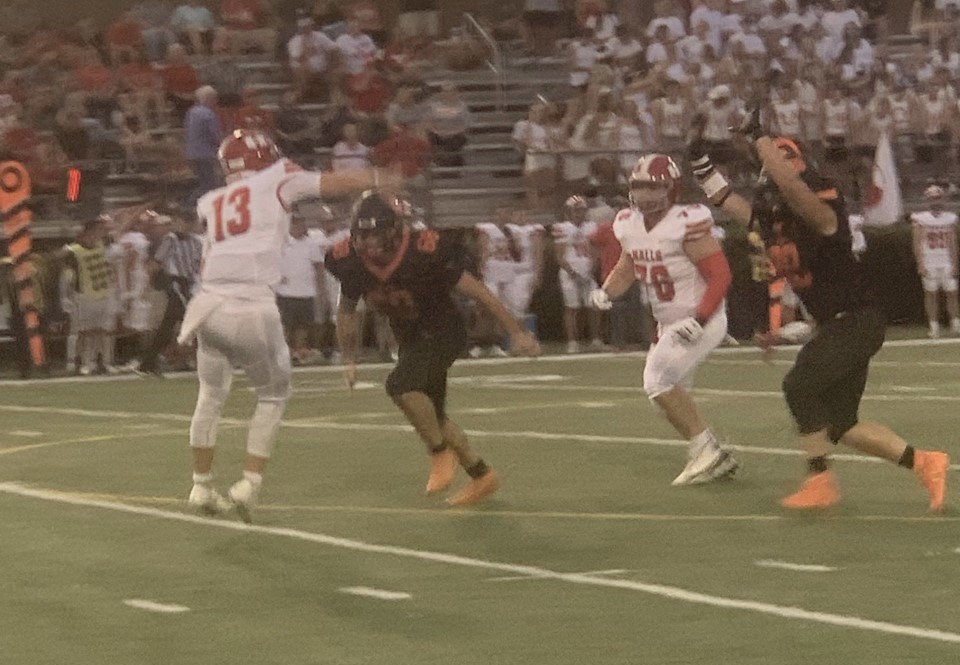 MORRISTOWN – Former Morristown East High principal J.T. Williams said before tonight’s home against Halls that East would treat the Red Devils like herded cattle. One of the East coaches during the game told the players, when they were behind, that they had been working hard and might not get their payday.

Turns out, the Hurricanes did get paid with a 34-28 win that ended a 0-for-5 skid against Halls all-time and kept 2021 from repeating. In 2021, East lost to the Trojans and ended up going 0-6 before getting their first win. 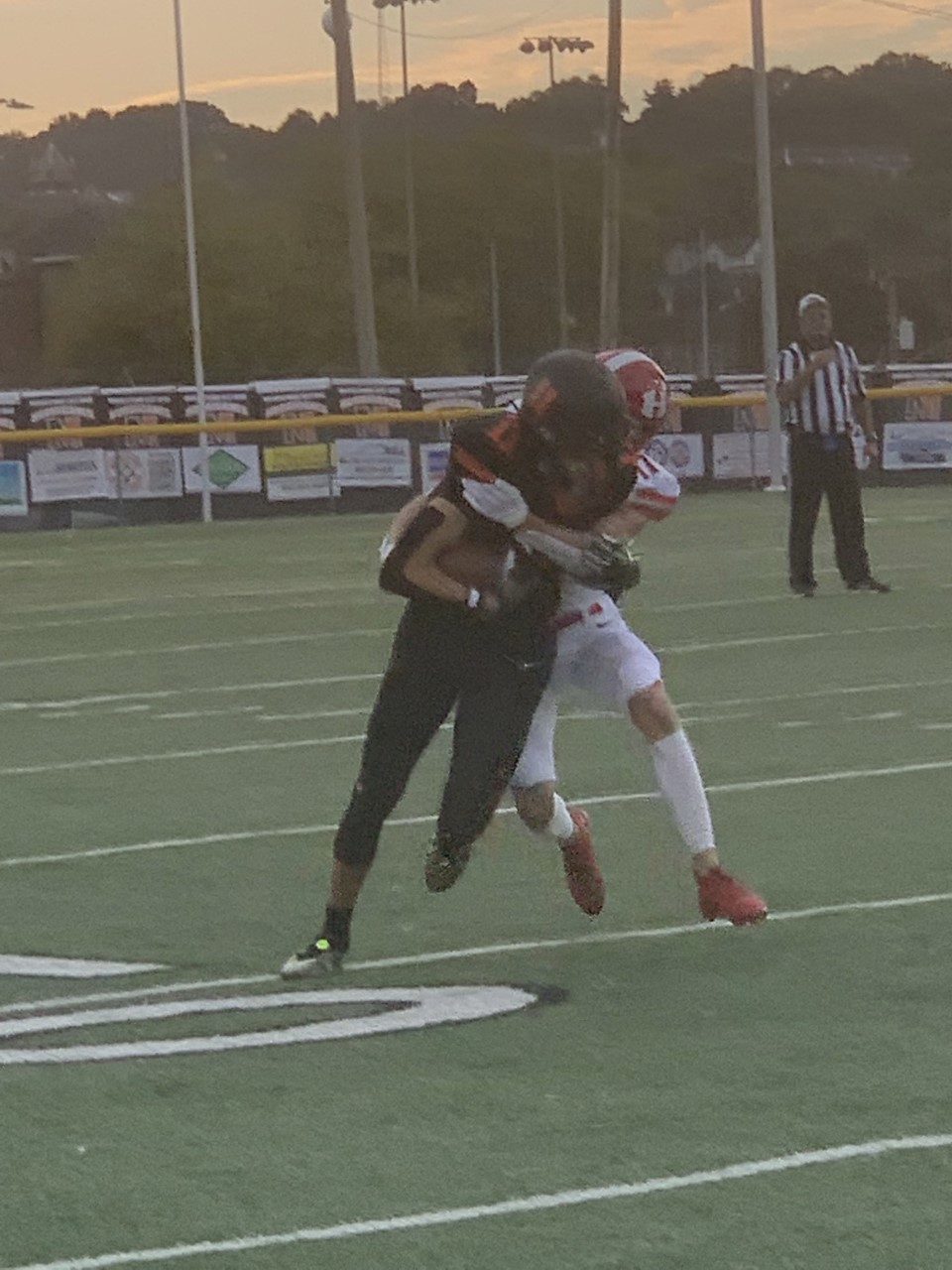 Morristown East’s Alex Anderson (11) tries to pick up some extra yards after the catch during the Hurricanes’ 34-28 win over Halls. Photo by Christopher Maloney.

When East visits Dobyns-Bennett next Friday, they will be 1-1 after bouncing back from an early 14-0 deficit out of the gate.

Halls was up 14-0 with 5:46 left in the first quarter when East began their drive to victory.

East’s first score came after Ryan Adams had a 9-yard run, Skyler Hubbard made an 11-yard catch, Ethan Ledford made a 25-yard run to the Red Devils’ 12, and then Ledford had a 4-yard run to get to the 1. Camren Richards ran it that final yard to get East within 14-7 with 1:17 left in the first quarter.

Halls did score late in the first half, though, to move ahead 21-14 with 34.3 seconds left off a 7-yard touchdown pass to D.J. Hunt before the break.

In the second half, East’s Camren Richards passed the ball 26 yards to Nathan Roberts and then Roberts caught a 6-yard pass. Richards ran off 11 yards to the Devils’15, Ledford got it to the 13 and then Ryan Adams made a 13-yard touchdown catch with 5:57 left in the third quarter to get East within 21-20 as East’s point-after attempt sailed just below the uprights.

East moved ahead on their next drive. Ryan Adams ran off a 7-yard and 20-yard run, while Richards gained some yards and then Adams added 15 yards to the Devils’ 9. Ledford ran it to the 1 and then Ledford ran it in from one yard out as well to put East up 27-21 with 51.7 seconds left in the third quarter. 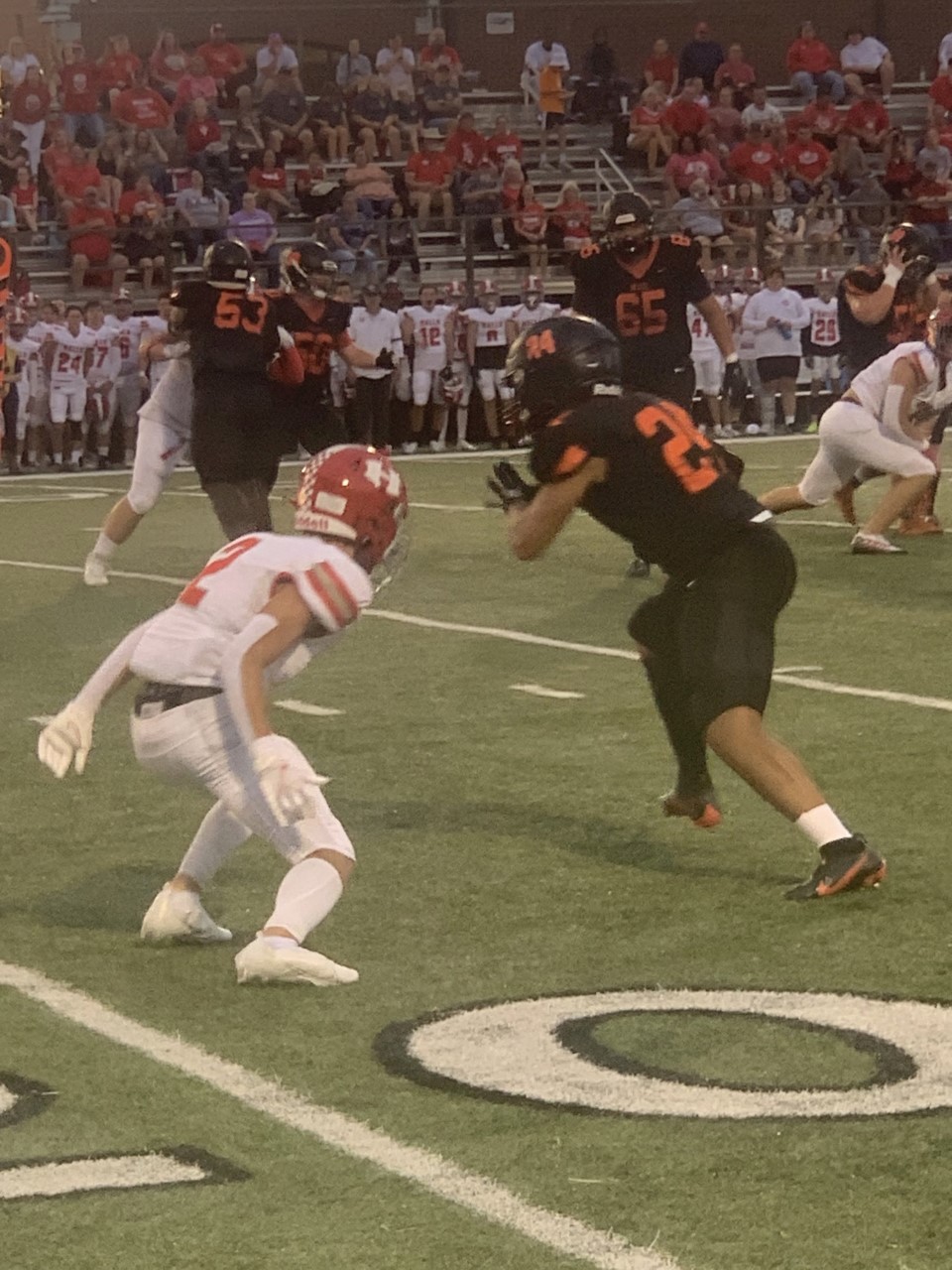 Hurricanes’ running back Camren Richards (24) looks for room to run against the Red Devil defense. Photo by Christopher Maloney

Later, East’s Max Baker sacked Halls quarterback Cassen Huffaker to end the Red Devils drive and get East the ball back with 5:11 left on the clock.

The play that sealed East’s win was made by Hurricane Austin Brannan, as he intercepted a Halls pass with 3:10 left. Time eventually ran off the clock and East left their home field victorious and paid.

After the win, Morristown East head coach Caleb Slover said, “We regained our composure after that loss to Morristown West last Saturday (a 24-7 loss to the Trojans). We just hit the reset button on Monday and put that loss behind us best we could.”

“The kids such as Camren Richards, Nathan Roberts and Skyler Hubbard did a great job finding the holes that the offensive line was able to make for them tonight, something that was missing against West,” said Slover.

“We hadn’t been able to find or make the lanes, but we did tonight,” Slover said. “Ethan Ledford also made some big plays and helped keep drives alive. Our offensive line did a great job tonight and worked their butts off. Now that we got that monkey off our back, we will go to Dobyns-Bennett next Friday and try to get above .500.”

Dobyns-Bennett is coming off two shutout wins over Tennessee and Volunteer to start the season and are currently ranked 8th in Class 6A.