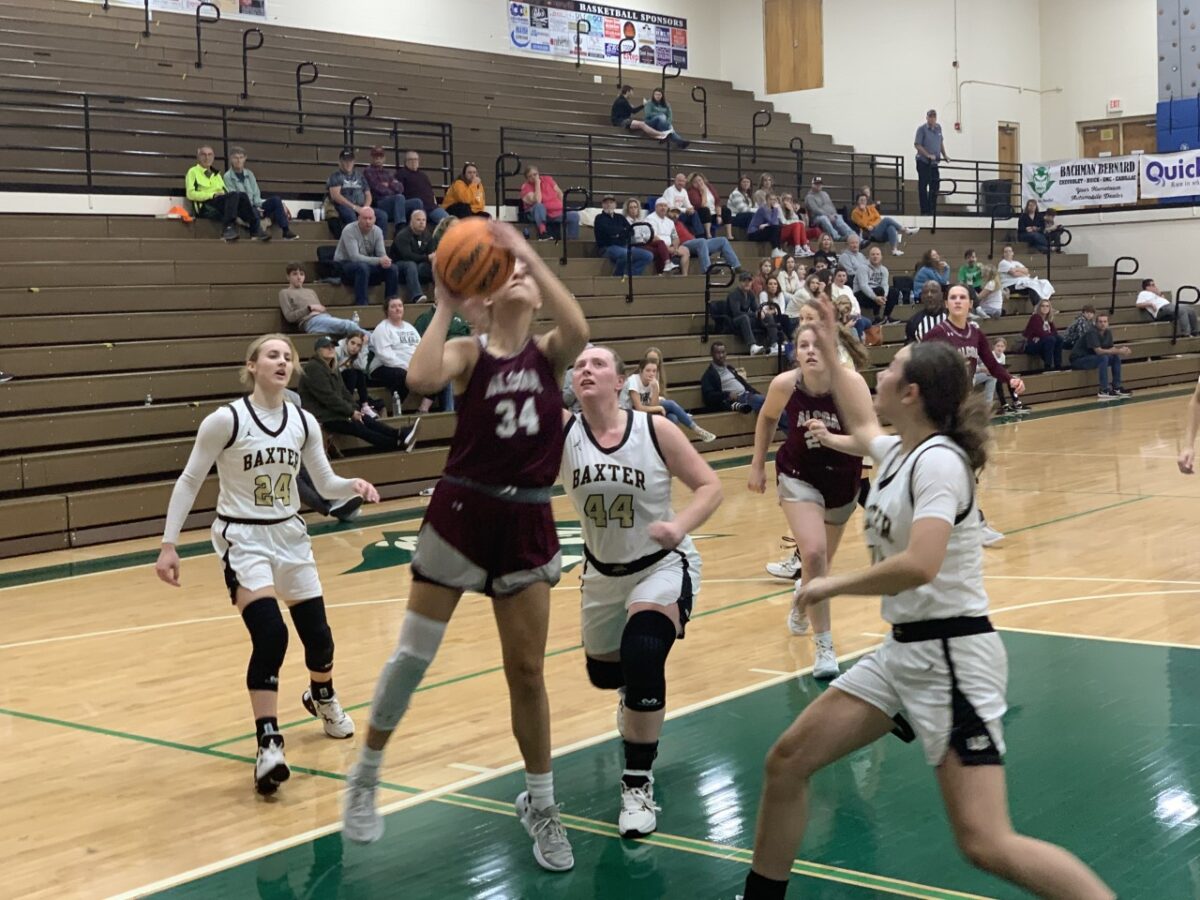 Greeneville – Alcoa moved into the Andrew Johnson Bank Ladies’ Classic championship on Saturday, in large part to a gutty performance by senior Mak Bremer, who helped the Lady Tornadoes overcome a 13-point third quarter deficit and come away with a 42-41 win over defending Class 3A champs Upperman.

Bremer saw her junior season end in the season opener of 2021, as she suffered an ACL tear while driving to the hoop on November 18 against McMinn Central. Bremer, now a senior, did not want to see her team go down in the semifinal against Upperman and when her team was down double-digits she responded by scoring 24 of her game high 26 points in the second half. 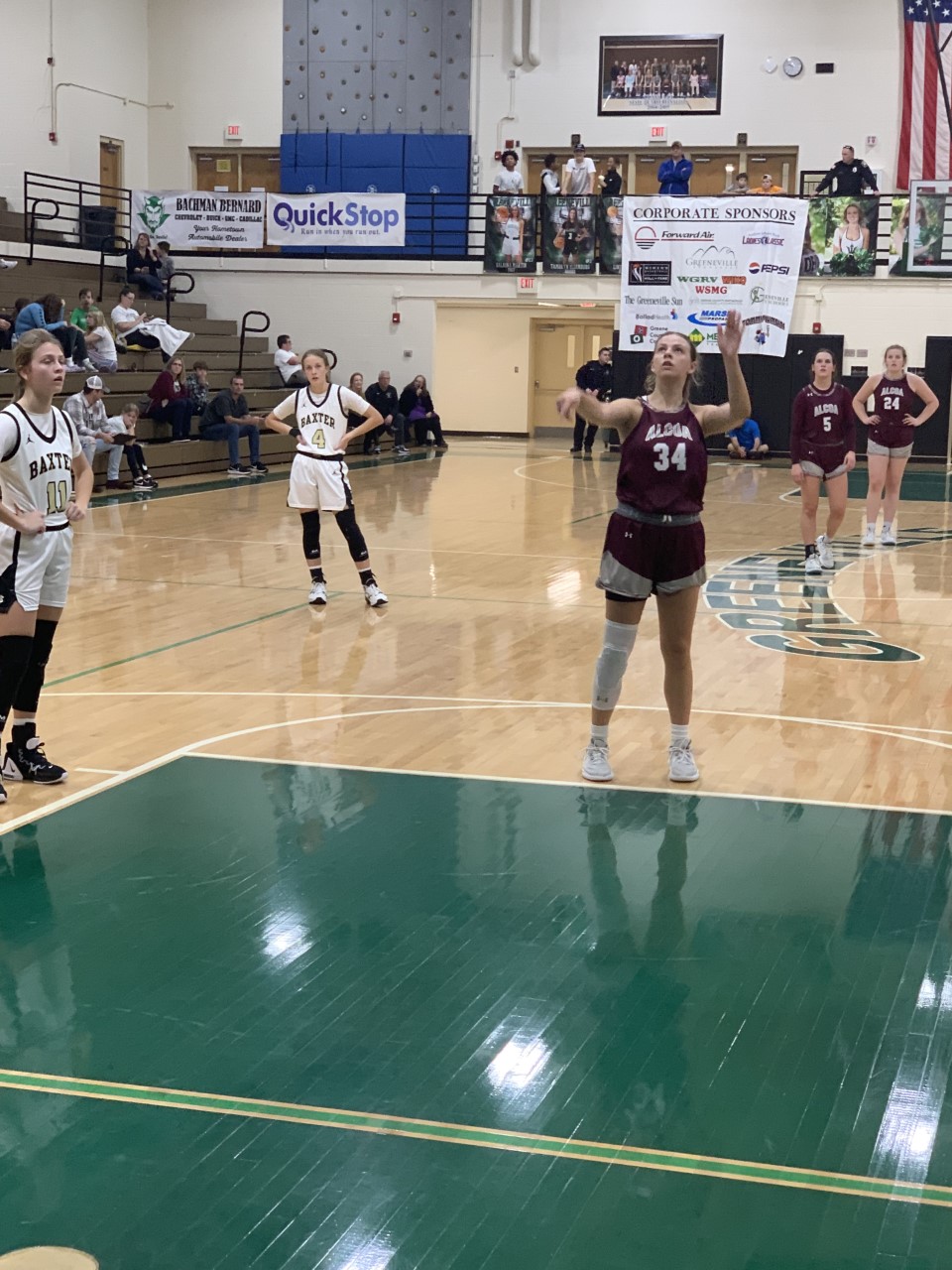 Mak Bremer (34) shoots a free throw for one of her 26 points in Friday night’s semifinal contest against Upperman. Alcoa overcame a 13-point second half deficit to win 42-41. Photo by Brian Hamilton

“It was an incredible effort from her. She stepped up and hit shots,” Alcoa coach David Baumann said after the game. “She’s been coming on for the last two or three weeks, starting with the Fulton game. She’s been really solid in our last six or seven games. She’s been looking like her old self and obviously, this is her best night, tonight.”

Upperman drew first blood with a fast break layup to take an early 2-0 lead. Bremer was fouled on the other end and converted both free throws to tie the game at 2-2. A three by Haworth on the next Alcoa possession would give the Lady Tornadoes a 5-2 lead.

Jayla Cobb answered for the Lady Bees, scoring a basket to cut the Alcoa lead to 5-4. Macie Ridge was knocked down and fouled on a three on the other end, but the senior was only able to convert 1-of-3 free throws, making the Alcoa lead 6-4.

Alcoa experienced a scary moment on its ensuing possession, as Amelia Pfeiffer took a charge and hit her head on the hardwood, suffering a concussion and having to leave the game. The junior would not return to the game.

“She took a charge and she hit her head hard,” Baumann said. “This is December. We’ve got aspirations for big things and we’re going to need her in February. We’re not going to risk her health.”

Cobb scored on a layup to to tie the game at 6-6 with 2:10 remaining in the first quarter, but a Haworth steal and layup, along with a foul put the Lady Tornadoes back in front 9-6 with under one minute left in the quarter. Freshman Taylor Dolente hit a three as the first quarter buzzer sounded to knot the score at 9-9 after the first period.

Upperman opened the second quarter on a 9-0 run, thanks in part to a three by Bella Mullins and six free throws, giving the Lady Bees an 18-9 lead with just under five minutes left in the first half. Abigail Johnson hit a layup on the next possession for Upperman, as Alcoa watched its deficit balloon to 20-9 with 3:41 to go until halftime.

Ridge finally gave the Lady Tornadoes its first points of the second quarter with a three-pointer to cut the Upperman lead to 20-12 with 3:27 left in the period. Johnson went down and converted with a layup on the other end, however, stretching the lead back to 10.

The Lady Bees were threatening to stretch the lead even further when the Alcoa defense was able to force Upperman’s Jayla Cobb into a five-second violation. Bremer hit a foul line jumper to make the score 22-14 with 2:15 to go, but neither team was able to score again until Dolente was fouled and hit a pair of free throws with 25 seconds left in the half. Alcoa went into the locker room trailing 24-14 at the half.

Ridge made a layup off an inbounds play to cut the deficit to 24-16 with 6:04 left in the third quarter. She then took a charge on the other end to give the ball back to Alcoa, but the Lady Tornadoes came up empty on the possession.

Dolente hit a three on the other end to stretch the Upperman lead back to double digits, at 27-16, with 4:39 left in the third. At this point in the game, Haworth and Ridge were having trouble getting shots to fall and that’s when the third member of Alcoa’s senior trio, Mak Bremer, decided to put the team on her back. Bremer hit a jumper on the Lady Tornadoes’ next possession to trim the deficit to 27-18 with 4:11 to go in the third quarter.

Alcoa’s Baumann was issued a technical on the next Upperman possession, sending Johnson to the free throw line, where she made both to stretch the lead back to 29-18. Cobb scored on the ensuing possession, giving the Lady Bees their largest lead of the night at 31-18. 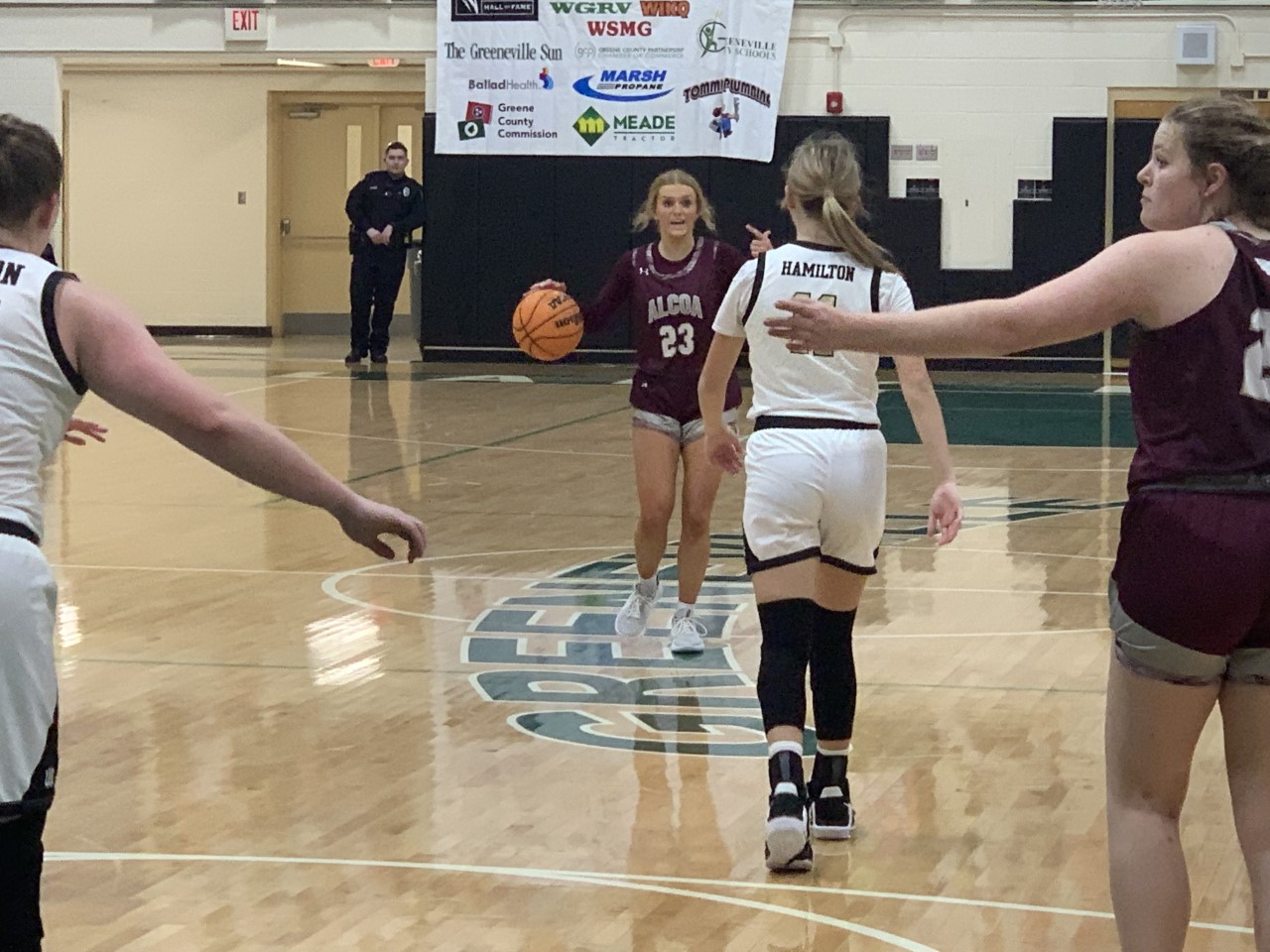 Alcoa’s Karli Haworth (23) brings the ball up the court during the Lady Tornadoes’ semifinal win over Upperman. Haworth hit two late free throws and a reverse layup that was the de facto game winner for Alcoa. Photo by Brian Hamilton

The Lady Bees came out of the timeout and fed Johnson, who was able to make a layup and convert the foul shot to stretch the Upperman lead back to 34-23. Bremer drained another three on the other end, cutting the Alcoa deficit to 34-26.

Upperman’s Mullins was called for a charge on the other end, giving the ball back to Alcoa. Bremer was fouled on a layup attempt and converted both free throws to trim the Lady Bees’ lead to 34-28 at the end of the third quarter.

Bremer made another jumper to start the fourth quarter and pull the Lady Tornadoes to within 34-30, but Johnson was fouled and converted another old-fashioned three-point play on the other end, extending the lead back to 37-30. Another Bremer three would cut the Alcoa deficit back to 37-33 with just under seven minutes left in the game.

Two free throws by Mullins would give Upperman a 39-33 lead, but one could feel the momentum had slowly shifted in Alcoa’s favor. Bremer would make two consecutive layups to cut the Lady Bees’ lead to 39-37 with 3:50 left in the game.

Bremer was fouled on the next Alcoa possession with a chance to tie the game, but only converted 1-of-2, leaving the Lady Tornadoes trailing 39-38 with 2:53 left in the game.

Haworth was fouled on a drive and went to the line and stuck two free throws to give Alcoa a 40-39 lead, its first since holding a 9-6 lead before Dolente’s first quarter buzzer beater.

Mullins made a layup for Upperman with 1:07 left and after Alcoa came up empty on its next possession, it looked like the Lady Tornadoes would have to play the foul game and hope for some misses. That is exactly what happened on the next possession, as Upperman’s Jayla Cobb missed the front end of a one-and-one and Haworth came down on the other end with an up-and-under reverse layup to put Alcoa in front 42-41 with 25 seconds remaining.

Upperman missed on the ensuing possession and fouled Alcoa’s best foul shooter, Karli Haworth. Uncharacteristically, Haworth missed the front end of the one-and-one and Upperman called timeout with 2.7 remaining, but needing to go the length of the court to win. 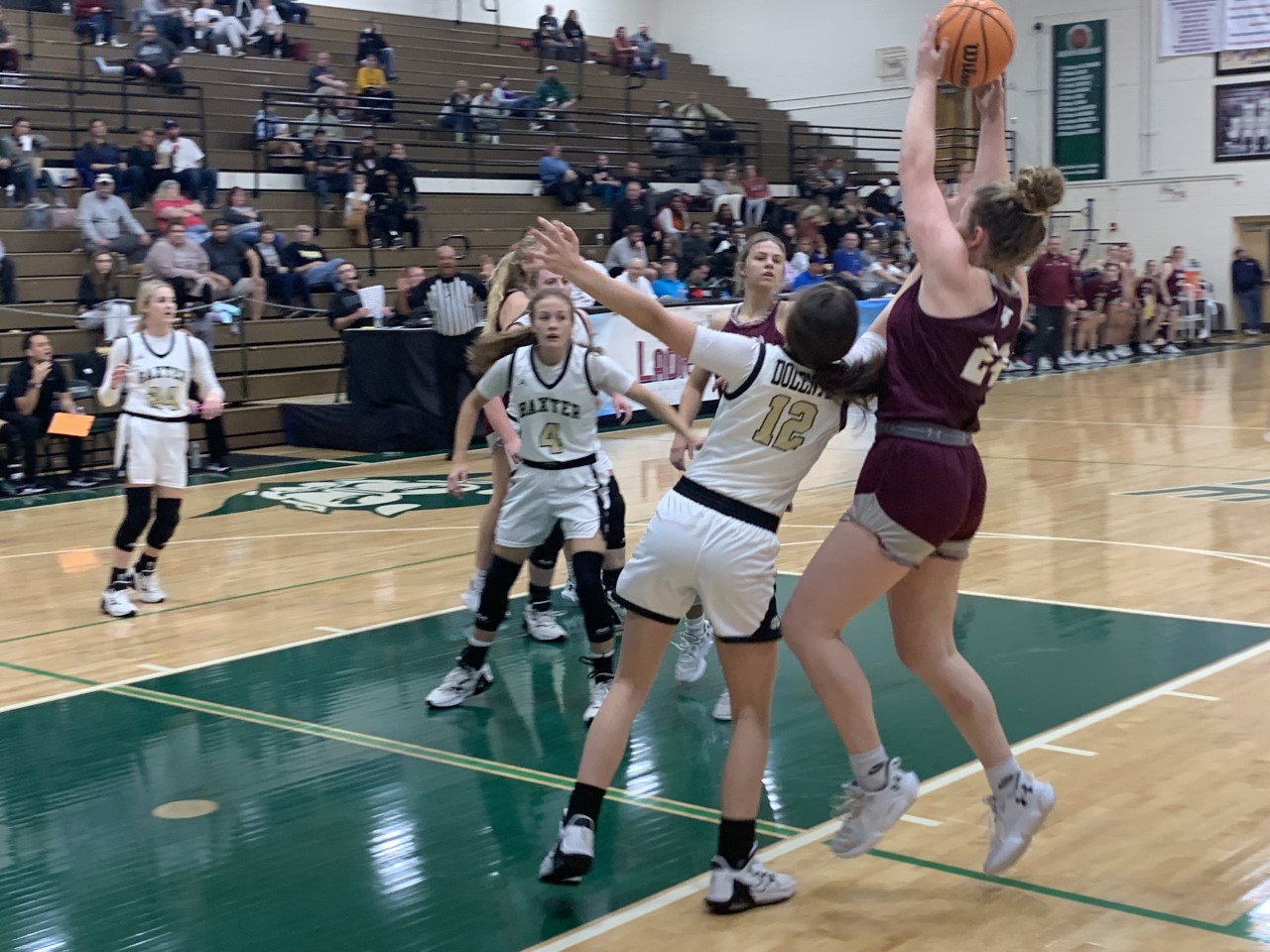 Ainsley Pfeiffer (24) fights for a rebound over Upperman’s Taylor Dolente (12) during the Lady Tornadoes’ 42-41 win in the semifinals of the Andrew Johnson Bank Ladies’ Classic. Photo by Brian Hamilton

The Lady Bees inbounded the ball to Johnson, who hit Cobb streaking down the right sideline. Cobb was unable to advance the ball much further than half court and missed the shot badly — although the shot may have even been released after the final buzzer sounded — preserving the comeback for the Lady Tornadoes.

“My assistant coach, Taylor Brown, made the point that if we want to be a championship team and win the district championship, region championship, or state championship, we’re going to have to overcome 10 point deficits against good teams,” Baumann said. “We challenge them and we just reminded them that we’re still here, we’re still fighting and competing.”

Bremer finished with a game-high 26, which also was her season-high. Karli Haworth finished with 10 points, while Macie Ridge added six. Those three were the only players to score for Alcoa in the contest.

“Karli and Macie’s shots weren’t falling but they just completely disrupted everything they wanted to do offensively in the second half,” Baumann said. “Their ball pressure, their effort and their play defensively was huge for us.”

Abigail Johnson led Upperman with 16 points, while Bella Mulls finished with 12 and Taylor Dolente added eight for the Lady Bees.

Alcoa (13-1) will take on Knox Catholic (8-8) on Saturday at 5:30 p.m. at Hal Henard Elementary School in Greeneville. Knox Catholic is coming off a 74-51 win over Greeneville in the semifinals.