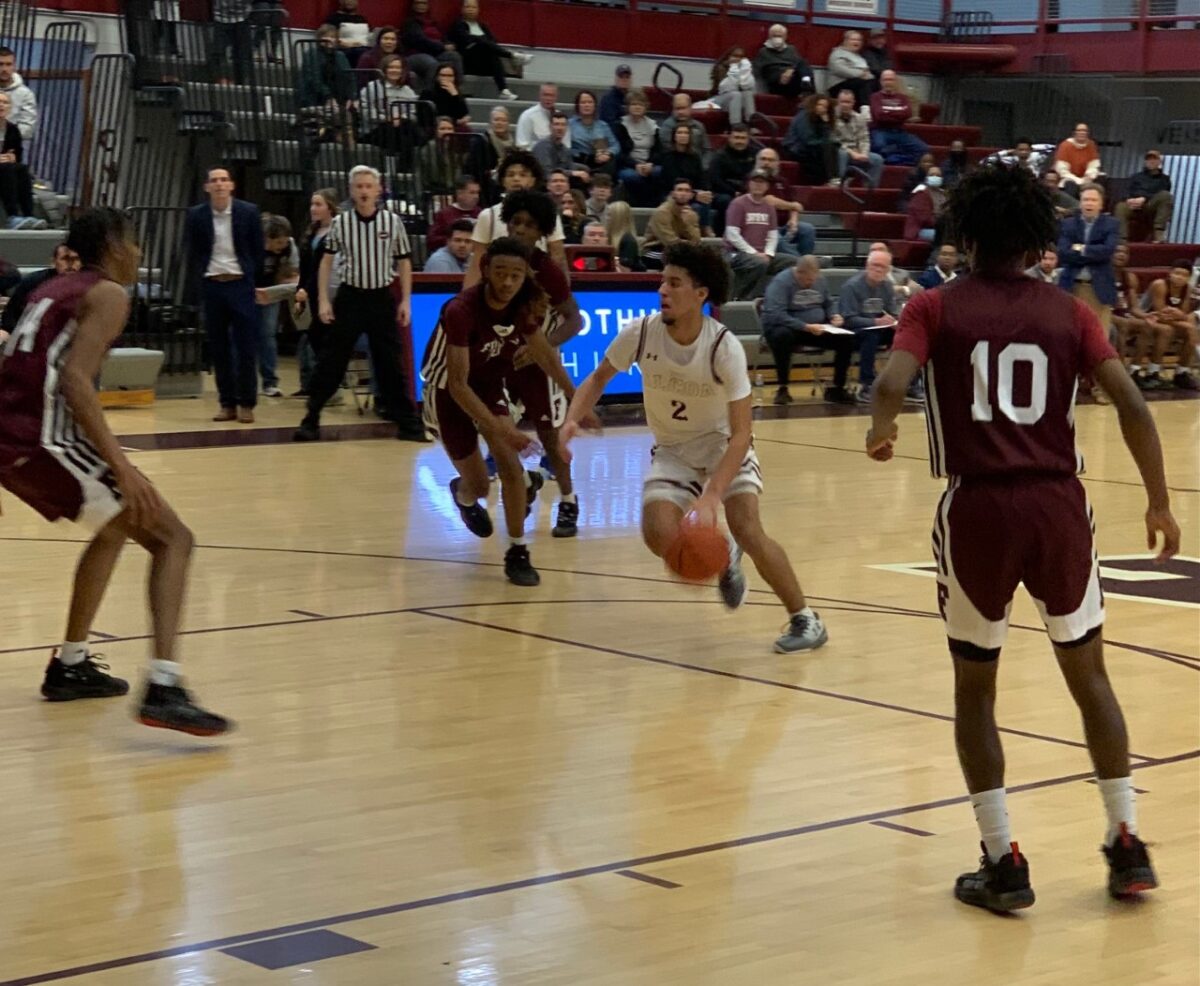 ALCOA – Fulton came into Alcoa on Thursday night and led the Tornadoes by as many as 17 in the third quarter, but Jahvin Carter score 24 of his 32 points in the second half to pull out a 57-56 come from behind win over the Falcons, who came in as the 6th-ranked team in Class 3A. 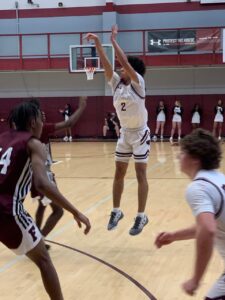 Alcoa’s Jahvin Carter (2) goes up for a three during his second half scoring surge. The Tornadoes came back from down 17 in the third quarter to pull off a 57-56 win. Photo by Brian Hamilton

“We’ve had our struggles the whole season and we’ve been down and out and given into frustration,” Alcoa head coach Ryan Collins said. “I’m so proud of the kids tonight, because they didn’t take that path tonight. They chose a different path. It started with our top three (scorers) and then Jahvin Carter got hot and when one of your players gets hot like that, it’s on.”

Desmier Hatchett opened the scoring with a three-pointer to put Fulton in front 3-0, but after several missed threes by Alcoa on the next two possessions, Terrence Dorsey drained a triple to tie the game at 3-3. Another three by Jahvin Carter put the Tornadoes ahead 6-3.

Alcoa got out on a fast break on the ensuing possession and Carter converted a fast-break layup for an 8-3 Alcoa lead with 5:04 remaining in the first. This forced Fulton coach Jody Wright to call a timeout and regroup his team.

Fulton would score out of the timeout, but Dorsey made a three to give the Tornadoes an 11-5 lead with 3:56 remaining in the first quarter.

Hatchett made a floater for Fulton to make the score 11-7, but a jumper by Eli Graf stretched the Alcoa lead back to 13-9. The Falcons ended the first quarter on a 4-0 run, capped by a buzzer-beating layup by Jalen Turner to knot the score at 13 apiece after one period.

Fulton would then go on an 11-0 run to take a 31-18 lead on a three-pointer by Denaj Kimber with 1:17 left before halftime. The Tornadoes would finally end the drought when Elijah Cannon made a basket to cut the deficit to 31-20 with just under a minute to go. 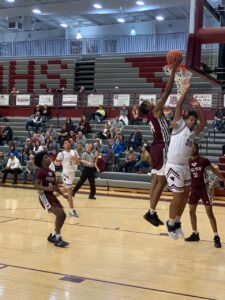 Tyler Lee (44) goes up over Eli Owens (30) for a basket during the second quarter. Photo by Brian Hamilton

The Falcons made two free throws just before halftime and took a 33-20 lead into the locker room at intermission.

Alcoa opened the third quarter with a steal and passed to Eli Owens for a basket, making the score 33-22. Kimber would drain a jumper on the other end to put the Falcons up 35-22.

“The consistent message, across the board, was just always compete every single possession.” Collins said after the game. “I thought the first play of the second half was really important. We guarded 30-40 seconds and I think Jordan Harris gets his hand on the ball and tips it out, literally, in front of our bench and I’m thinking that there’s no chance the kid gets it, but he somehow saves it to a teammate, and we get a layup. At halftime, you challenge them. Can you be the tougher team and are we going to continue to compete or we going to kind of lay down and give into defeat?”

Jackson hit a pair of free throws to give the Falcons a 44-29 lead and a basket by Lee would give Fulton its largest lead of the game at 46-29 with 3:09 left in the third quarter.

Dorsey passed to Carter for a layup to trim the Alcoa deficit to 46-31 out of a timeout. Carter then made a layup off an inbounds pass to make the score 46-33 with 2:16 left in the third. Another fast break layup by Carter would make the score 48-35 at the end of the third quarter.

Carter had already begun to heat up late in third and continued that in the fourth quarter, draining a three to cut the Alcoa deficit to 48-38. The sophomore would hit another three with just over six minutes left to make the score 48-41. 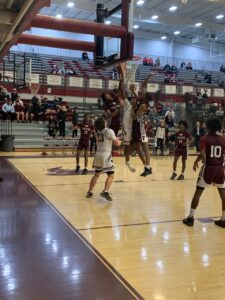 Alcoa’s Jordan Harris (1) gets blocked by two Fulton defenders during the first half of Alcoa’s 57-56 upset over #6 Fulton. Photo by Brian Hamilton

Carter made a driving layup to pull the Tornadoes to within one, at 48-47. On the next possession, Cater nailed a three to give Alcoa a 50-48 lead, its first lead since 13-11 in the first quarter. The three by Carter called a 17-0 run, going back to the third quarter when Fulton led 48-33.

Fulton would score their first points of the fourth quarter and end the Alcoa run on the next possession and take a 52-50 lead when Kimber made a layup.

Harris responded with a layup to tie the game at 52-52 with 1:32 left in the game. Carter came back down and drilled another triple for a 55-52 lead with 50 seconds remaining. Fulton scored to cut the Alcoa lead to 55-54 and Graf was fouled on the other end and made both foul shots to give the Tornadoes a 57-54 lead with 17 seconds to go.

Kimber was fouled and converted both free throws to make the score 57-56 with 12 seconds left and then Carter missed the front end of a one-and-one after getting fouled on the inbounds. Both teams scrambled for the loose ball and Alcoa’s Cannon recovered, but was on the end line, giving the ball to Fulton.

The Falcons took a timeout to draw up a final play with seven seconds left and Hatchett beat Carter on the drive, but Carter was able to punch the ball out from behind and Dorsey won a scramble for the loose ball, passing out to Graf who headed down the court and ran out the clock for a 57-56 win over 6th-ranked Fulton.

“I think the biggest key to the game is that you have to keep them from getting second chance points and you couple that with we can’t have live ball turnovers,” Collins said. “When we lost the second quarter by 13, I think (Fulton) ended up with eight offensive rebounds in the first half and five buckets off that and then a couple of live turnovers and then you’re out of the game.”

Jahvin Carter led all scorers with 32 points, while Terrence Dorsey added 13. Jordan Harris and Eli Graf each pitched in with four apiece.