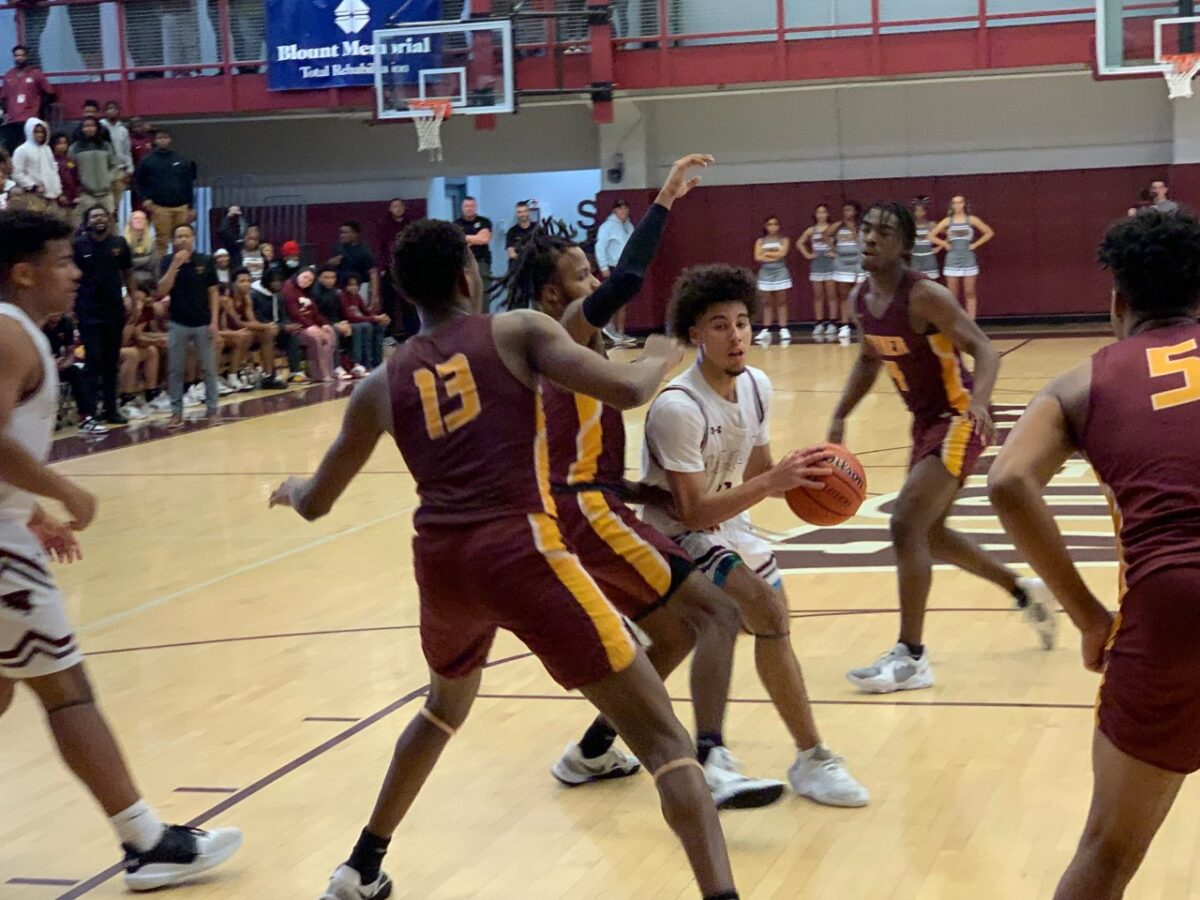 ALCOA – Jahvin Carter’s two free throws sent the game to overtime and Terrence Dorsey had an opportunity to force a second overtime with one half-second remaining, but the senior missed the first, as the Tornadoes trailed by two. Dorsey laid up a perfect miss off the side of the rim, which was corralled by Jordan Harris, but the putback didn’t fall, as Tyner Academy won 54-52 and advanced to the Elite 8 in Murfreesboro. 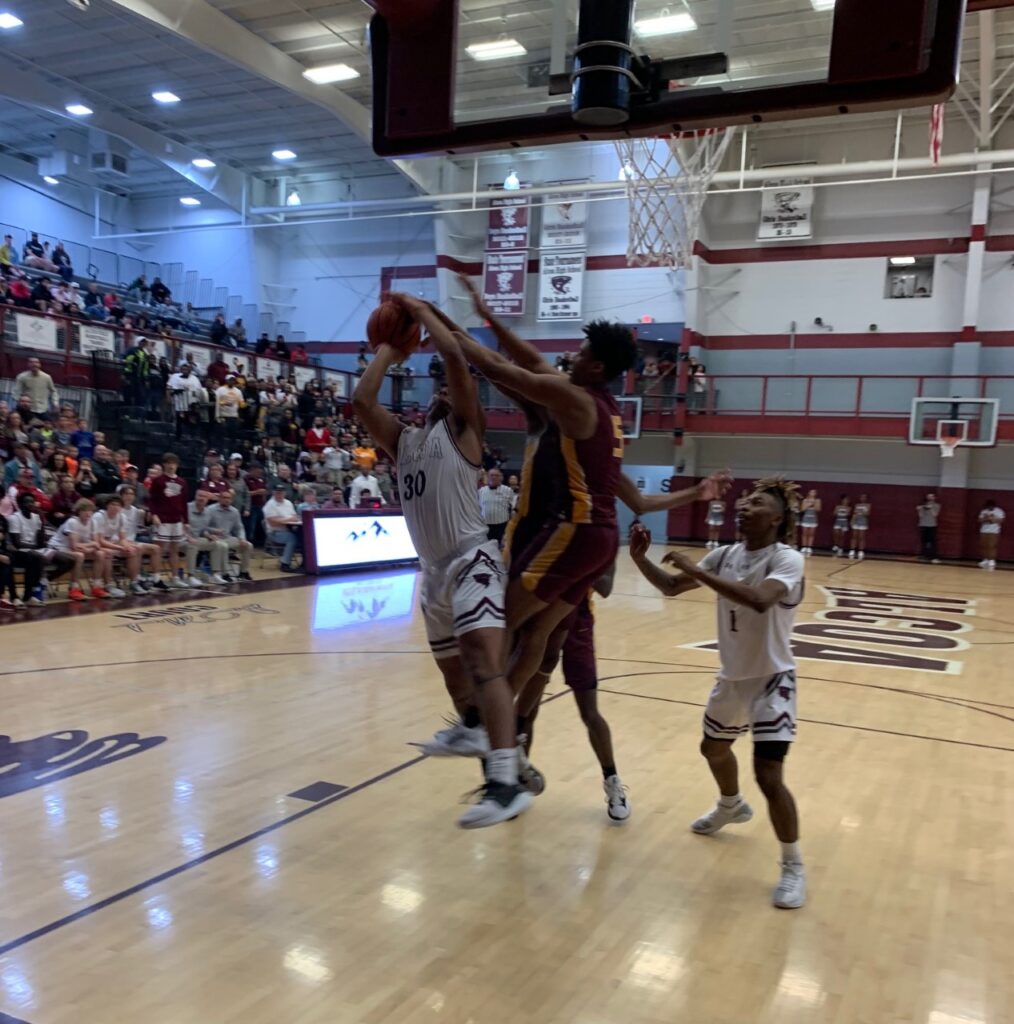 Eli Owens (30) gets fouled on a layup by Tyner Academy’s Latavious Conyers (5) during Alcoa’s 54-52 overtime loss in the substate sectionals. Photo by Brian Hamilton

“Sometimes, when you go all in on something, you’ve got to realize that you could come up heartbroken and I think for us to get to the point this season where I truly felt like we were all in together, it hurts that tonight we ended up in the heartbroken state,” Alcoa coach Ryan Collins said. “One play doesn’t define (Dorsey). He’s a guy we believe in and have a lot of trust in, but one play doesn’t define him. It’s hard to understand that when you’re sitting here and see your career end like that, but the message is that there’s small room for error and during a basketball game, every play matters when you come up two points short and unfortunately, that’s just kind of where we were at.”

On the first Alcoa possession, Jahvin Carter drove to the rim and was blocked. Each team traded possessions before Nehemiah Bloodshaw hit 1-of-2 free throws to give Tyner Academy a 1-0 lead with just under seven minutes left in the opening quarter.

Shots weren’t falling early for the Tornadoes, as Carter — Alcoa’s leading scorer — had trouble getting anything to fall.

The Rams first basket from the field came over two minutes into the game, as Rodney Henderson hit a layup for a 3-0 lead. Anthony Sims made a layup to push the lead to 5-0 with 3:36 remaining in the first quarter.

Alcoa finally got on the board with 2:56 left in the first quarter when Carter hit a layup to make the score 5-2.

Latavious Conyers made a layup off an inbounds play and then grabbed a rebound and putback on Tyner Academy’s next possession, giving the Rams a 9-2 lead with 2:20 remaining in the first.

Terrence Dorsey was fouled and made both free throws, pulling the Tornadoes to within 9-4, but two more baskets by Conyers made the score 13-4 with just over one minute remaining.

Alcoa missed a shot at the buzzer and trailed 13-4 after one quarter, as the Rams were threatening to rout the Tornadoes.

Conyers scored on a layup to open the second quarter, giving Tyner Academy a 15-4 lead, but Carter would answer on the other end, making the score 15-6.

Two free throws by Carter trimmed the Tornadoes’ deficit to 15-8, followed by Brady Haun knocking down a corner three to cut the Rams’ lead to 15-11 with 4:36 left before halftime.

Tyner Academy would increase the lead back to double digits with a 21-11 lead, but a 7-0 Alcoa run would get the Tornadoes back in the game at 21-18 with 1:40 remaining in the half. 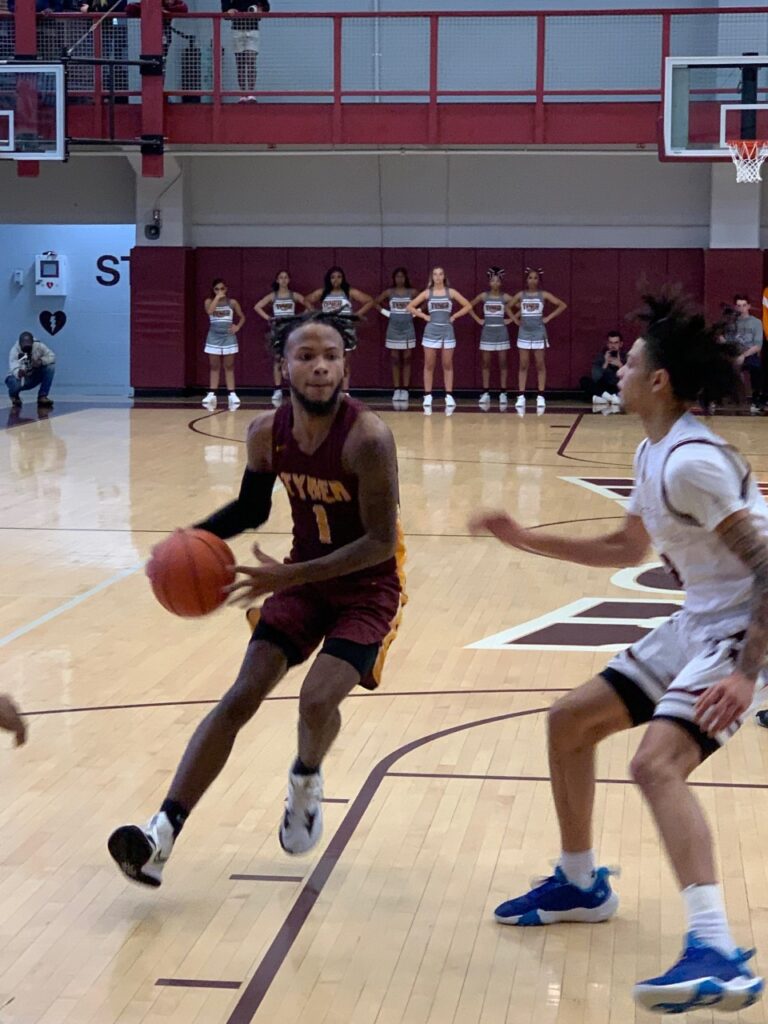 Carter hit a long two with under one minute left to pull Alcoa to within 25-22 and Henderson missed a three at the horn, sending the Rams to intermission clinging to a 3-point advantage.

A Jordan Harris rebound and putback cut the Tyner Academy lead to 25-24 early in the third quarter. On the next Alcoa possession, Carter got into the lane for a layup to give the Tornadoes their first lead of the game (26-25) with just over six minutes left in the third.

Dorsey made a layup, followed by a free throw to put Alcoa ahead 29-25, capping a 9-0 run going back to the first half.

Conyers would end the drought for Tyner Academy, hitting a layup to make the score 29-27.

Carter found Elijah Cannon underneath for a layup to cut Alcoa’s deficit to 34-33 with 11 seconds left. A three by Xavier Fisher with four seconds left gave Tyner Academy a 37-33 lead, but Dorsey would catch the inbounds near halfcourt and make it all the way to the rim for a layup as time expired. The Rams went into the fourth quarter leading 37-35.

Tyner Academy opened the fourth quarter on a 6-0 run with three consecutive baskets by Conyers, giving the Rams a 43-35 lead.

Carter would make a basket off a rebound to make the score 43-37, followed by the sophomore guard making a steal near halfcourt and going in the other direction for a layup to cut Tyner Academy’s lead to 43-39.

Freshman Eli Graf grabbed another steal off the Tornadoes’ pressure and passed to Carter for a layup, making the score 43-41 with 3:12 remaining in the game.

Alcoa would cut its deficit to 44-43 on a Carter layup with just under two minutes left, but Bloodshaw was fouled and converted a 3-point play to put the Rams ahead 47-43 with 1:25 to go.

Owens was fouled on the Tornadoes’ next possession and sank both free throws, making the score 47-45. Carter was then fouled with 14 seconds left and hit both shots to tie the game at 47-47.

Alcoa sophomore Jahvin Carter (left) and senior Terrence Dorsey (right) are honored before the game by Alcoa and Coach Ryan Collins (center) for surpassing the 1,000-point plateau during their high school careers. Photo by Brian Hamilton

“Jahvin was huge. I felt Jahvin was composed all night,” Collins said. “He really struggles early when he didn’t see one go in and we could’ve definitely lost our composure and went our different ways, but I thought Jahvin was kind of the piece that settled the storm. He carried us and he’s done that all year. He seems to just rise to the occasion and deliver.”

Tyner Academy missed on an opportunity to win the game and the ball went out of bounds with one second remaining. Alcoa inbounded the ball and the game went to overtime with the teams knotted at 47-47.

Dorsey put Alcoa on the board first in overtime, as the senior grabbed his own miss and stuck it back in, giving the Tornadoes a 49-47 advantage.

The Rams’ Conyers hit a layup on the other end and was fouled, converting the 3-point play for a 50-49 lead with 2:47 left in overtime.

Dorsey made a layup with 1:12 left to put the Tornadoes back in front 51-50, but Keelan Jackson corralled a rebound and scored for a 52-51 Tyner Academy lead with 48 seconds remaining.

On the next Alcoa possession, Dorsey slipped while trying to drive the lane and lost the ball, as Tyner went down for a layup to take a 54-51 lead.

Owens was fouled on the next Tornadoes’ possession and made 1-of-2 free throws to make the score 54-52. The Rams lost the ball out of bounds to Alcoa and Dorsey was fouled on a shot with less than a second left.

Dorsey went to the line and missed the first free throw, prompting Collins to call timeout. The plan, obviously, had to be a miss and rebound. Dorsey clanged it off the rim perfectly, as Jordan Harris caught the rebound and put it back. The ball just rolled off the front rim, however, ending the Tornadoes’ season.

“Once he missed the first one, I did think it was as perfect a miss as you could ask for on the second one,” Collins said. “He had a soft miss to the right side to clear space with (Eli) Owens and there’s Jordan (Harris) to make a winning play, but it just came up short.”

Rams’ fans rushed the court, celebrating the 54-52 win, as coaches and administrators had to clear the floor for the safety of the players, sending Tyner Academy fans to the busses.

Junior Jahvin Carter and senior Terrence Dorsey were honored before the game for breaking the 1,000-point threshold in their high school careers.

Alcoa’s season ends with a record of 17-18, while Tyner Academy (23-10) will travel to Murfressboro to face Bolivar Central in the Elite 8 on Tuesday, March 15.