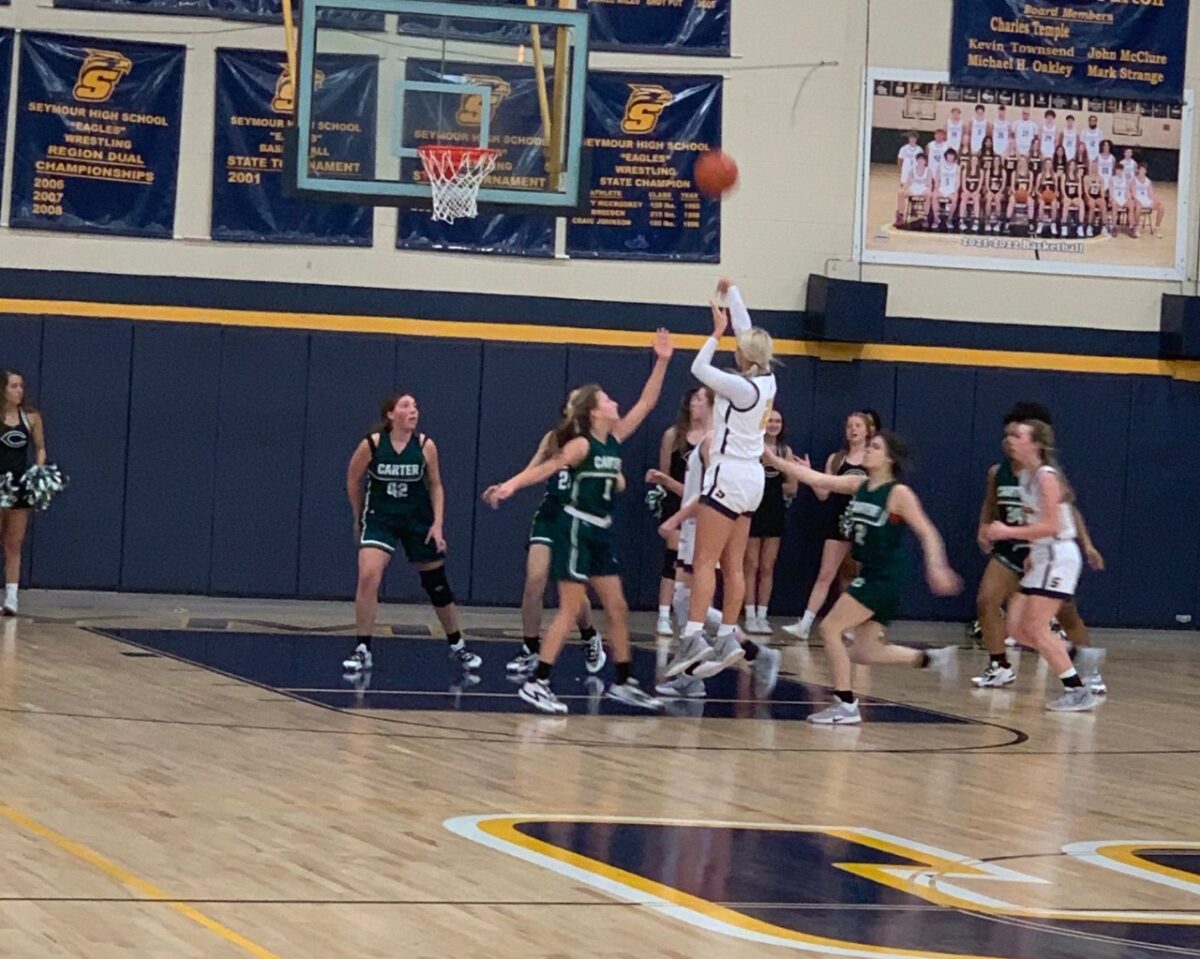 SEYMOUR – After a first quarter where Seymour and Carter played to a draw, it looked as if fans were in for a classic Class 3A District 3 battle. That’s before the Lady Eagles embarked on a 38-0 run to put the game out of reach, winning 52-17.

Kaylyn Shultz (24) drives for a basket against the Carter defense. Photo by Brian Hamilton

“I didn’t realize it was 38-0, but I did realize they hadn’t scored in a while,” Seymour head coach Greg Hernandez said after the game. “Mentally we weren’t focused at the start, but we did a good job of waking up and making things a lot harder for them.”

The teams ended the first quarter knotted at 11 points apiece and Carter took a 14-11 lead with under five minutes left in the second quarter. From that point on, Seymour seemed to flip a switch.

Caiden Russell was fouled and hit one-of-two free throws to make the score 14-12. The sophomore guard then made a layup on the other end to tie the game at 14-14.

Two consecutive layups by Kaylyn Jarvis made the score 18-14, followed by a steal and layup by Jaden Cummings to give Seymour a 20-14 lead.

Kaylen Schultz was fouled on a layup and converted both free-throws to make the score 22-14. Bailey McCoy scored three straight points with just over a minute left before halftime for a 25-14 lead.

Cummings drained a three-pointer with 10 seconds left in the half to send Seymour to the intermission on a 17-0 run, leading 28-14.

Seymour and Carter girls battle for a loose ball during the Class 3A District 3 matchup. Photo by Brian Hamilton

Emma Watson made a steal and layup to open the third quarter for the Lady Eagles. A three-pointer by Cummings would push the lead to 33-14 and the Seymour run was now at 22-0.

The Lady Eagles would corral six offensive rebounds on their next possession and finally, Russell hit a three to give Seymour a 36-14 lead with 5:07 remaining in the third.

Jarvis nailed a three with 3:39 left in the quarter for a 39-14 lead and the Lady Eagles would score on their next possession to stretch the scoring run to 30-0, dating back to the second quarter.

A fast-break layup by Jarvis gave Seymour a 43-14 lead, followed by a Kelsey Cruz three pointer, giving the Lady Eagles a 46-14 lead going into the fourth quarter. Seymour ended the third quarter on a 35-0 run.

Another Jarvis three-pointer increased the Lady Eagles’ lead to 49-14 and the scoring run to 38-0, as a running clock was instituted in the game’s final quarter.

Carter’s Sadie Coffey would finally end the 38-0 scoring run by sinking a pair of free-throws with 2:49 left, making the score 49-16. Olivia Craig would score the Lady Hornets’ last point of the game on a foul shot to make it 52-17, which would be the final score.

After an Ivy Jones three-pointer in the second quarter to give Carter a 14-11 lead, the Lady Hornets would not score another field goal for the remainder of the contest, as their last three points came from the charity stripe. 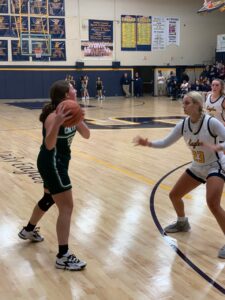 Rodriguez said this was one of his team’s best defensive performances of the season.

“When these girls decide to buckle down and get in the passing lanes and are active with their hands and active with their feet, regardless of the opponent, we’re able to make things hard on people,” Hernandez said. “Holding any team to six points over the last three quarters, you’ve got to be pretty happy about that.”

Seymour (20-4) won their fourth straight since losing at Gatlinburg-Pittman and will travel to Sevier County (17-4) on Tuesday night for a non-region game. A win against Northview Academy on Feb. 4 will secure the district championship for the Lady Eagles.

Carter (3-12) will travel to Scott (8-15) Tuesday night, as the Lady Hornets will attempt to snap a four-game skid.