KODAK – Northview Academy ran out of time against Unicoi County Friday night, as the Cougars fell 22-15.

“They all played hard and I’m very pleased with them,” Northview head coach Heath Woods said. “We made mistakes and when you make mistakes you lose ballgames.”

Quarterback Alex Cruz-Mendoza, a converted running back, put Northview on the board first with an 8-yard touchdown run, giving the Cougars an 8-0 lead.

Unicoi then scored 22 unanswered points, taking a 15-8 halftime lead and later a 22-8 lead, as Nehemiah Edwards scored from two yards out midway through the third quarter.

The Cougars answered on their next possession with a 68-yard scoring drive, aided by a long pass from Cruz-Mendoza to Kerim Durmaz. Cruz-Mendoza would find paydirt on a 15-yard run to cut the Northview deficit to 22-15 late in the third quarter.

Northview threatened late, driving to the Unicoi 14-yard line with less than a minute to go, thanks to several first down runs by Cruz-Mendoza. The Cougars came up short on a couple of hail mary attempts and fell short, losing 22-15. 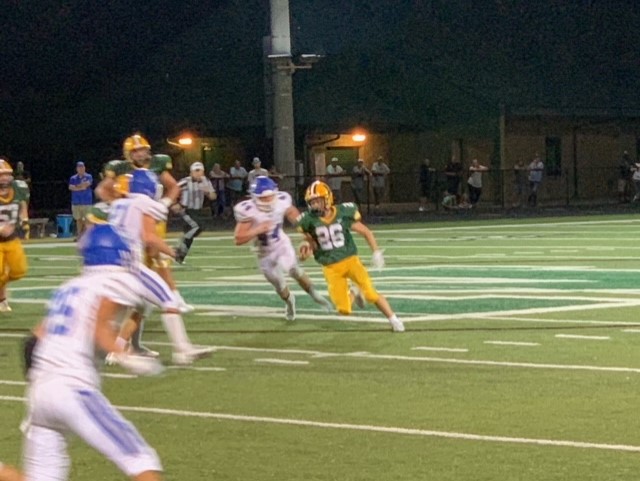 Northview Academy running back Nick Schroth looks for daylight against the Unicoi County defense in a 22-15 loss.
Photo by Brian Hamilton

Cruz-Mendoza spearheaded the Cougars’ comeback effort, rushing for 184 yards on 24 carries, while passing for 90 yards on 8-of-19 passing and tossing two interceptions. Sophomore Nick Schroth rushed for 31 yards on six carries for Northview.