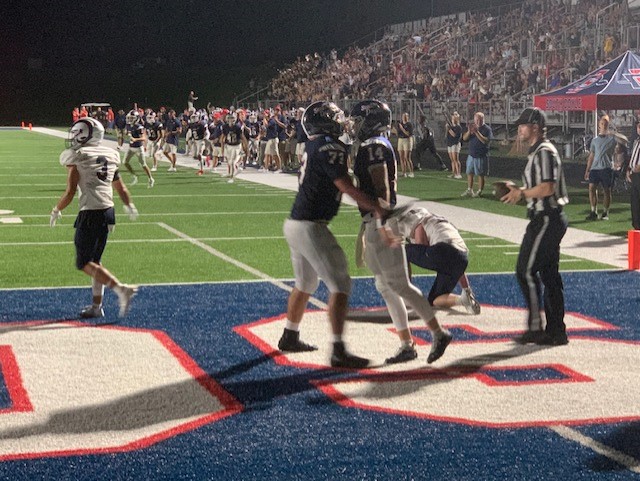 KNOXVILLE – South-Doyle escaped with a 34-27 win against Grace Christian Friday night behind running back Shawn Gary’s 286 yards and four touchdowns.

“He’s a player,” South-Doyle head coach Clark Duncan said of Gary. “He does a great job, but we’ve got some great guys up front doing some great things and pushing people around and giving him opportunities to find daylight, then when he finds daylight, he’s just dynamic.”

South-Doyle got on the board at the end of the first quarter when Gary ran for a 13-yard touchdown to put the Cherokees ahead 7-0 after one quarter of play.

Gary went in for another score from eight yards out, giving South-Doyle a 14-0 lead with 2:33 left in the first half.

On the next Rams possession, Jake Boudreaux found Pierce Browning for a 5-yard score to cut the Cherokees’ lead to 14-7 with 28 seconds left in the half.

Grace Christian would get the ball back off a turnover and Boudreaux hit Alden Addington for a 20-yard touchdown to tie the game at 14-14 at halftime.

The Rams had an opportunity to take the lead early in the third quarter when Lucas Hollifield missed a 36-yard field goal with 7:50 left in the third.

The game was then postponed due to lightning with just over six minutes left in the third quarter. The teams went to the locker room and the game resumed approximately 30 minutes later.

“We had some cramping issues and they did too (before the delay), so it really helped us to go back in and hydrate some and we came out fresh and had the ball down here with 2nd-and-3 and we took the ball and went down the field and scored,” Duncan said. “That was huge for us.”

The Cherokees came out from the weather delay with a stellar drive, culminating in a 2-yard touchdown run by quarterback Nick Martin. The extra-point attempt was unsuccessful, leaving South-Doyle with a 20-14 lead late in the third quarter. 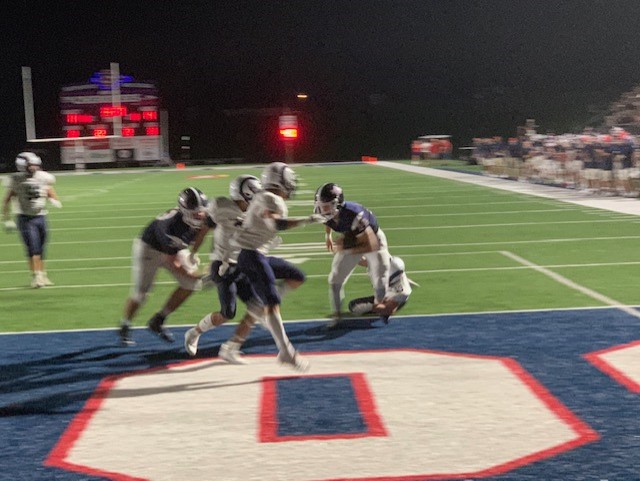 The Cherokees’ Nick Martin goes into the end zone for a 2-yard touchdown in the third quarter, giving South-Doyle a 20-14 lead. Photo by Brian Hamilton

South-Doyle added another score with 8:44 left in the fourth quarter when Shawn Gary ran for an 11-yard touchdown to push the Cherokees’ lead to 27-14.

The Rams would respond quickly on the next drive, as Boudreaux ran for a 3-yard touchdown to pull Grace Christian to within 27-20 with 7:58 left.

The next Cherokees drive ate up over five minutes of clock and resulted in Gary scoring his fourth rushing touchdown of the night on a 17-yard run. South-Doyle would go ahead 34-20 with 2:36 left in the game.

Grace Christian would waste no time answering, as Boudreaux hit Ronen McCarthy for a 13-yard score to pull to within 34-27 with 43 seconds remaining. The Rams recovered the onside kick and took over at their own 45-yard line. Grace was able to manufacture one first down, but there was an illegal procedure penalty on the final play, effectively ending the game in a 34-27 South-Doyle win.

“What a heck of a job Grace (Christian) did,” Duncan said. “They really fought hard and kept competing. We hurt ourselves early in the game with multiple penalties that we’ve got to clean up and at the end of the game, we hit some adversity . We’ve said all along that we’ve got to manage adversity and we did that.” 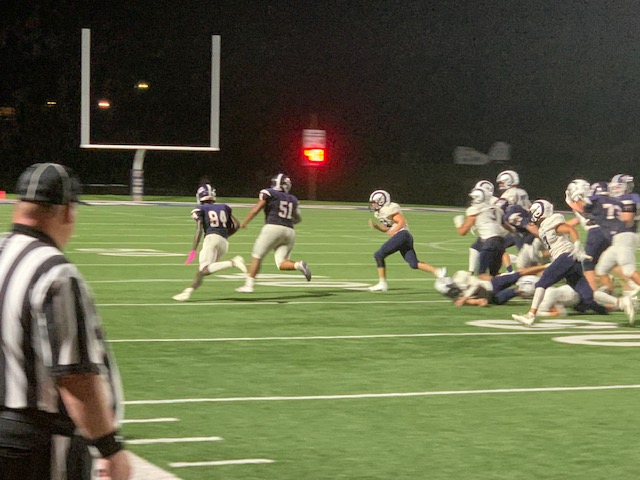 Shawn Gary (84) runs for a big gain in the fourth quarter of South-Doyle’s 34-27 win over Grace Christian. Photo by Brian Hamilton

In addition to Gary’s 286 yards and four touchdowns, quarterback Nick Martin passed for 84 yards on 6-of-14 passing, while rushing for one touchdown. Tajuan Owens also finished with 55 yards rushing for the Cherokees.

Grace Christian was led by Jake Boudreaux, who threw for 130 yards and three scores on 11-of-18 passing. The quarterback also rushed for 43 yards and a touchdown.

South-Doyle (2-0) will travel to Scott (0-1) for their first District 2 matchup of the year. Grace Christian (1-1) will have the week off next week.