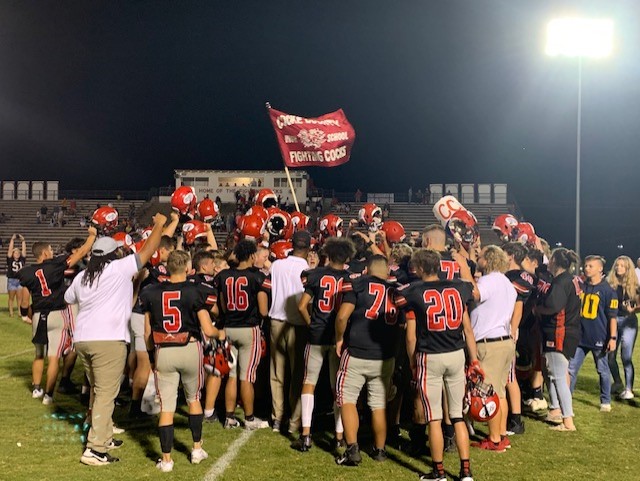 NEWPORT – Cocke County picked up its first win of the season on Friday night, as the Fighting Cocks made a goal-line stand on a two-point conversion with just over a minute to go, preserving the 29-27 win.

“We had Baylor (Baxter) and all the guys back that we hadn’t had the first couple of weeks we felt a little more comfortable with our game plan,” Cocke County head coach Scotty Dykes said. “Obviously, they’re a very good defensive team and we just felt like we had a couple looks we could take advantage of and the execution tonight has probably been the best we’ve had in three games.”

The Mountaineers’ Cayleb O’Conner (24) is pulled down by a Cocke County defender. Photo by Brian Hamilton

Heritage jumped on the board first, when wide-receiver Kyle Headrick took a handoff and threw a 9-yard touchdown to Kamron Moats for a 7-0 lead.

Cocke County answered on its next drive, tying the game at 7-7, which where the game stood after one quarter.

Cocke County came out of the locker room firing, as Baxter tossed a 68-yard touchdown to Lakkin France on a double-reverse to give the Fighting Cocks a 21-7 advantage less than 15 seconds into the third quarter.

“We were saving it until the second half,” Dykes said of the trick play. “We kind of ran it off the first play of the first half and was kind of hoping we’d catch them in the same look and we could run that play and maybe get a cheap six (points) out of it.”

Heritage would answer when Cayleb O’Conner ran for an 8-yard touchdown, cutting the Cocks’ lead to 21-14 with 8:57 remaining in the third.

Late in the quarter, one where both teams were heavily penalized, Cocke County fumbled near midfield, giving the ball to Heritage at their own 46 with just 22 seconds left in the third quarter.

The Mountaineers would take advantage of the turnover, with O’Conner punching it in the end zone for a 6-yard score, tying the game at 21-21 with 8:03 left in the game.

On the next drive, Cocke County was almost forced into a three-and-out, but was saved by a pass interference call, setting up the Cocks at their own 36. A couple plays later, Baxter hit Brazen Stewart for a 61-yard touchdown. 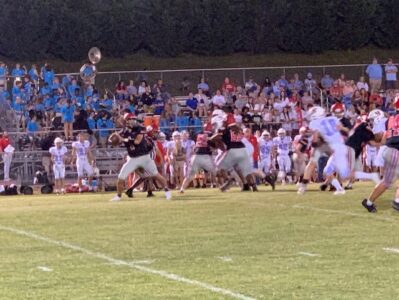 Cocke County’s Baylor Baxter (1) looks for a receiver during the Fighting Cocks’ 29-27 win over Heritage. Photo by Brian Hamilton

On the extra-point attempt, holder Baxter, received the snap and ran to his left for the end zone, giving Cocke County a 29-21 lead with just under six minutes left.

“That was not planned,” Dykes said. “It was a bad snap and our quarterback made a play, so that helps.”

Heritage would march down the field on its ensuing drive, as the Mountaineers were set up with 1st-and-10 at the Cocks’ 17-yard line with 2:39 remaining. However, Heritage would be forced into a 4th-and-4 from the Cocke County 15 with 1:38 to play.

The Mountaineers converted the fourth down and was set up with 1st-and-goal from the 5-yard line with 1:31 remaining. O’Conner then scored his third touchdown of the night from five yards out, making the score 29-27 with 1:14 to go.

It all came down to the two-point conversion for Heritage, but O’Conner came up short of the goal line, leaving the Mountaineers with a 29-27 deficit. Heritage went for the onside kick, but was unable to recover, leaving the Fighting Cocks to kneel twice and pick up a much needed region win.

Heritage was penalized 12 times for 95 yards during the contest.

“The penalties hurt, but those are excuses and we can’t make those,” Heritage head coach Tim Hammontree said.

Baylor Baxter led Cocke County with 204 yards and three touchdowns on 7-of-18 passing, while Heritage’s Wesley Deck finished with just 58 yards on 6-of-19 passing.

The Mountaineers were led by Cayleb O’Conner, who finished with 95 yards and three touchdowns on 17 carries. Daniel Foxx also ran for 140 yards on 17 carries for Heritage.

“Our confidence will come on Labor Day at 8 a.m.,” Hammontree said of the game with rival William Blount. “That’s where our confidence is. We start at the beginning of the week and our confidence builds up until Friday.”