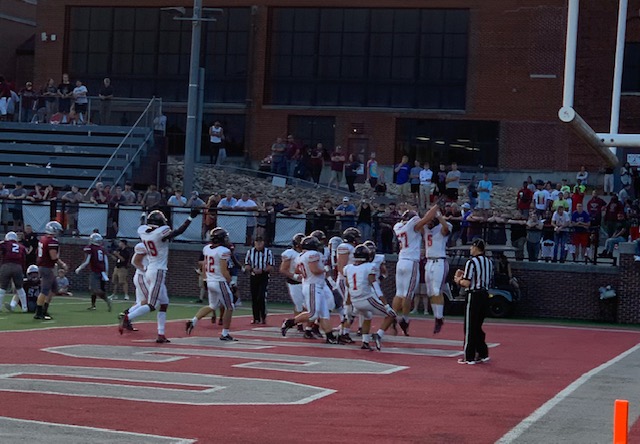 ALCOA – It was the 93rd edition of the Battle of Pistol Creek and boy, was it a good one. Maryville jumped out to an early 17-0 lead, but had to hang on late, as Alcoa fought back in the second half, only to fall 30-27.

“You’ve got to put yourself in positions like this to learn about your team,” Maryville head coach Derek Hunt said. “It’s really hard to get our guys up for big game after big game. When you play a team that is good enough to beat you every week and you’re not ready, you’re going to lose.”

The Tornadoes received the opening kick, but turned the ball over when wide receiver Isaiah Bryant fumbled and Maryville’s Jacob Richmond picked the ball up and returned it 41 yards for a touchdown and a 7-0 Rebels lead.

Corbin Price later booted a 27-yard field goal with 4:39 left in the first quarter and the Rebels led 10-0 after one quarter of play.

Maryville increased its lead to 17-0 with 5:30 to go in the second quarter, as quarterback Carson Jones ran for 10-yard score. 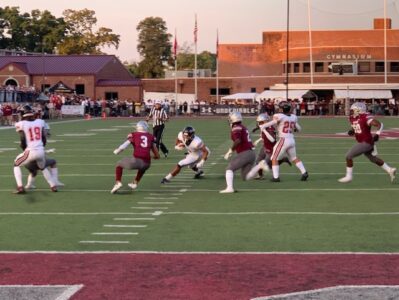 Alcoa finally got on the board with 1:24 left in the first half, as quarterback Caden Buckles went into the end zone for a 5-yard touchdown, cutting the Rebels’ lead to 17-7. Maryville would tack on another score, however, as Price drilled a 41-yard field goal as time expired in the first half. The Rebels took a 20-7 lead into intermission.

The Tornadoes cut the deficit to 20-13 with 3:19 left in the third quarter when Buckles found Bryant for a 35-yard strike. Maryville would take a six-point lead into the final quarter.

Alcoa tied the game at 20-20 with 9:54 left in the fourth quarter on an 18-yard hook and ladder, as Buckles passed to Bryant, who then lateralled to Jordan Harris, who ran into the end zone, tying the game.

The Rebels would answer on their next drive, however, as Gage LaDue scampered for a 28-yard touchdown run, putting Maryville back in front 27-20 with 8:08 remaining. Price would knock a 22-yard field goal through the uprights to stretch the Rebels’ lead to 30-20 with 4:38 left in the game.

Buckles would cut the Maryville lead to 30-27 on an 8-yard run with 2:31 to go and the stout Alcoa defense would force the Rebels into a three-and-0ut on their next possession. The Tornadoes received the ball back with roughly 90 seconds left in the game. 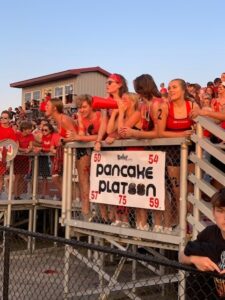 The Maryville student section is fired up, as the Rebels jump out to an early 17-0 lead.

Alcoa would come up short, however, as Buckles overthrew his receiver and Maryville’s Cannon Johnson was there for the interception, ending the Tornadoes’ comeback bid.

The only time Alcoa did not reach the end zone in the second half was on two Buckles interceptions.

“When somebody has all the momentum, all you can do is dig your cleats in the ground and have some grit,” Hunt said. “Those two interceptions were huge for us, because it was hard to get off the field otherwise.”

Maryville (4-0) will wrap up its three-game road trip on Friday night with a trip to Bearden (2-2). The Bulldogs are coming off a 26-7 loss to South-Doyle.