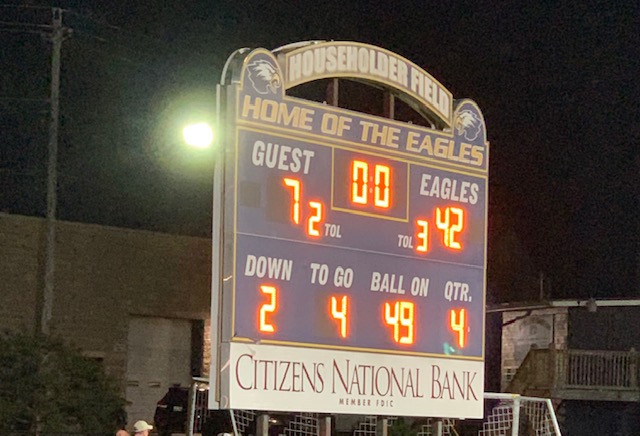 SEYMOUR – The Eagles looked a bit shaky early on, but began to pull away in the second quarter, en route to a 42-7 win over Sullivan-East. Josh Nevins recorded two pick sixes and the Seymour defense held the Patriots to just 116 yards of total offense.

Seymour took an early 7-0 lead against Sullivan-East, but the Patriots would answer with a third down touchdown pass from Drake Fisher to Hunter Brown, tying the game at 7-7 after one quarter of play.

The Eagles went ahead 14-7 in the second quarter when Josh Nevins intercepted Fisher on the first play of the quarter and returning it for a 40-yard touchdown.

Nevins intercepted another pass and returned it for a 28-yard score with 8:29 left in the first half, giving Seymour a 21-7 advantage.

“Josh is a competitor and I’m very proud of him,” Branton said of Nevins’ play.

The Eagles would take a 28-7 lead into halftime, thanks in part to four first-half interceptions. Seymour outgained the Patriots 283-77 in the first half, with senior phenom Brendon Harris rushing for 185 yards and two scores.

Brooks Crowder returned the second half kickoff 78 yards for a touchdown, putting the Eagles ahead 35-7. Seymour lead 42-7 after three quarters, which would be the final score, as the teams played with a running clock in the fourth  quarter.