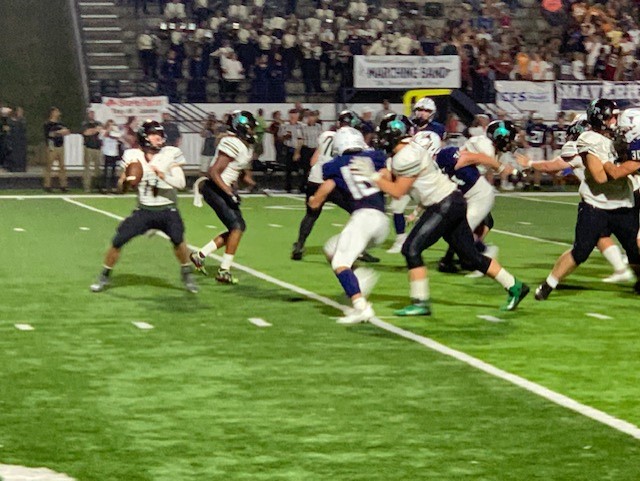 CLINTON – Carter fell behind early and fast on Thursday night, as the Mavericks raced to a 35-0 halftime lead and took sole possession of first place in the region with a 48-14 win.

Anderson County jumped on Carter early by intercepting a tipped pass by Chandler Wilson and returning it 55 yards for a touchdown and a 7-0 lead early in the first quarter. 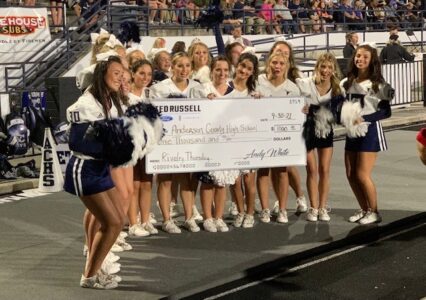 The Anderson County cheerleaders accept a $1,000 donation from Thursday Night Rivals during halftime of the contest. Photo by Brian Hamilton

Eli Davis intercepted another Wilson pass later in the first quarter and the Mavericks turned the Hornets’ miscue into seven points and a 14-0 lead.

The Mavericks went in front 35-0 with 25 seconds remaining before halftime when Walker Martinez hit Bryson Vowell for a 9-yard fade pass on fourth down.

Anderson County would go into the locker room with a resounding five touchdown advantage.

Carter would open the second half with a score, as Wilson hit Spencer Russell for a 75-yard touchdown. The two-point conversion was successful as Wilson hit Kaleb Harper for the conversion, cutting the Mavericks’ lead to 35-8 with 9:31 left in the third quarter.

After Anderson County took a 41-8 lead, Carter answered with a 1-yard touchdown run by Wilson, making the score 41-14. 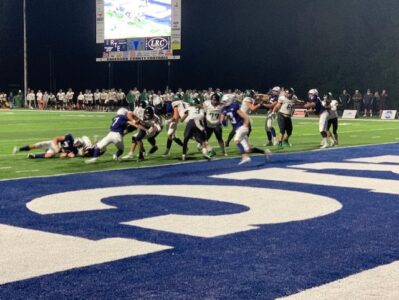 Carter’s Wilson Chandler goes into the end zone for a 1-yard touchdown run in the second half of Anderson County’s 48-14 win. Photo by Brian Hamilton

The Mavericks would add another score in the fourth quarter, giving Anderson County a 48-14 victory.