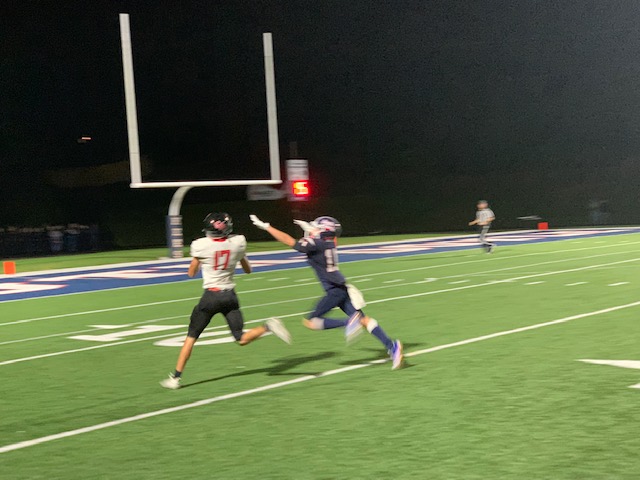 KNOXVILLE – It was Thursday Night Rivals. It was South-Doyle’s homecoming. It was also wet, as both teams battled heavy rain throughout the game. The rain let up just enough for the homecoming court to remain dry at halftime, but started back heavy in the second half.

Central Knox was able to take advantage of South-Doyle miscues and take a 35-21 win back to Knoxville against its traditional rival.

The Cherokees got off to a quick start against the Bobcats, as running back Shawn Gary ran 60 yards for a touchdown on the first play from scrimmage. South-Doyle led 7-0 with 10:48 left in the first quarter. 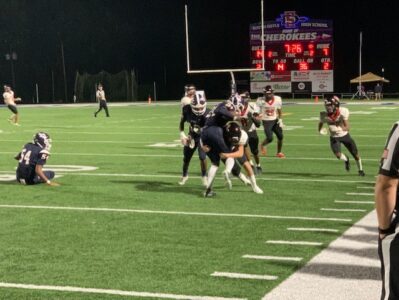 South-Doyle running back Shawn Gary (21) is stacked up by the Central Knox defense. Photo by Brian Hamilton

Central would respond on the ensuing drive, as Ryan Bolton found Colby Long for a 31-yard gain, followed by a 2-yard touchdown run by Frank Johnson to tie the game at 7-7.

After a South-Doyle turnover on downs, Bolton hit Will Siaway over the middle for a 64-yard touchdown and a 14-7 advantage.

The Cherokees penetrated deep into Bobcat territory on the next drive, but a 35-yard field goal attempt sailed wide right, putting Central back in business.

Kole Hughes kicked a 35-yard field goal in the second quarter to give the Bobcats a 17-7 lead at the half.

South-Doyle’s D’mon Marable intercepted Bolton at the Central 45-yard line on the first play of the second half and returned it to the 26.

Nick Martin then hit Dalyn Swaggerty on a swing pass, which he took to the end zone and dove for the pylon for a 12-yard score. The extra-point cut the Bobcats’ lead to 17-14. Central would respond with a field goal to stretch the lead to 20-14. 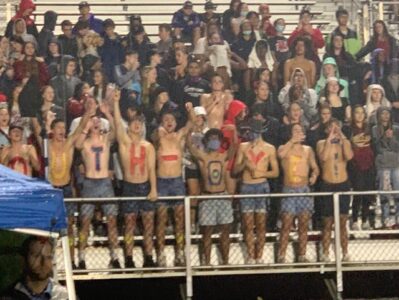 South-Doyle students weathered the rain on homecoming Thursday night during the Cherokees’ 35-21 loss to Central Knox. Photo by Brian Hamilton

Johnson would hit paydirt on the first play of the fourth quarter, stretching the Bobcats’ lead to 26-14. An 8-yard touchdown pass from Bolton to Caleb Johnson would give Central a 33-14 lead with 6:38 left in the game.

Shawn Gary ran for his second touchdown of the night from five yards out from the wildcat formation, pulling the Cherokees to within 33-21. A snap over the head of South-Doyle’s punter would be the last score of the game, as the Bobcats came away with a 35-21 win.