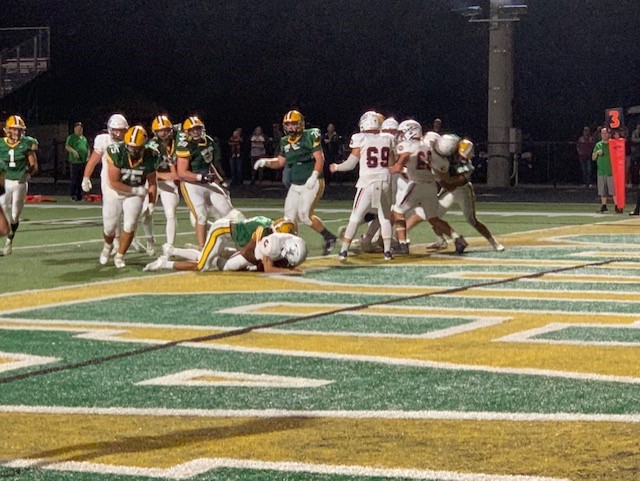 KODAK – Northview began its homecoming game against Grainger playing well and even got on the board first. Things started to go awry for the Cougars in the second quarter, however, as the Grizzlies took a 14-6 lead as the first half expired and came away with a hard fought 26-14 win.

Quarterback Alex Cruz-Mendoza went into the end zone on a 7-yard run to put Northview Academy ahead 6-0 after the two-point conversion failed. 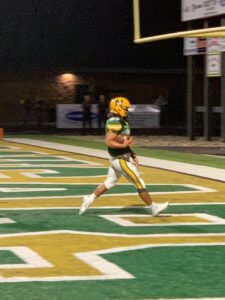 Northview Academy quarterback Alex Cruz-Mendoza runs for a touchdown in the first quarter to give the Cougars a 6-0 lead. Photo by Brian Hamilton

Grainger would go on a methodical 14-play drive, resulting in a 1-yard touchdown by Blake Morse. The Cougars blocked the extra-point attempt, leaving the score tied at 6-6 in the second quarter.

The Grizzlies’ defense forced a turnover on downs on 4th-and-11 and a 37-yard pass from Bryson Bennett to Landon Patterson put the ball at the 7-yard line. Grainger was able to call timeout with two seconds left in the half. Dylan Fowler entered the game at quarterback for the Grizzlies and channeled Tim Tebow with a jump pass to a wide open Ian Dortch for a touchdown.

Fowler ran for the two-point conversion and Grainger went to halftime with a 14-6 lead before a stunned Northview crowd.

“We had that Tebow play in our pocket and hadn’t used it yet,” Grainger head coach Michael Manis said. “It was a great job to dial it up there and get the ball to Dortch who made a huge catch. That was a huge momentum shift for us.”

In the third quarter, Bennett tossed a screen pass to Ty Overbay, who slashed through the Cougar defense for a 36-yard touchdown and a 20-6 lead.

Cruz-Mendoza ran for a 3-yard touchdown in the fourth quarter and converted the two-point conversion to pull Northview Academy to within six at 20-14.

On the next Grizzlies drive, Bennett found Cainin Long for a 56-yard touchdown to seal the win 26-14. 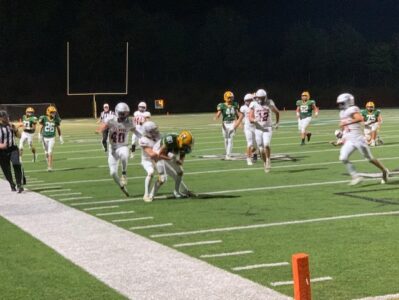 William Kirby (80) fights for yardage after making a catch during the Cougars’ 26-14 loss to Grainger. Photo by Brian Hamilton

Bennett finished the night with 226 yards and two scores on 13-of-18 passing. Dylan Fowler was 2-for-2 for 17 yards and a touchdown.

Cruz-Mendoza led Northview Academy with 139 yards on 11-of-21 passing, while running for 79 yards on 16 carries and two touchdowns.

“The second quarter was a great job by our kids of not quitting,” Manis said. “They jumped out on us quick and moved the ball and we couldn’t stop them except for when we caused turnovers.”

Grainger (4-4) will host Seymour (5-2) on Friday night with a chance to deny the Eagles a playoff berth.