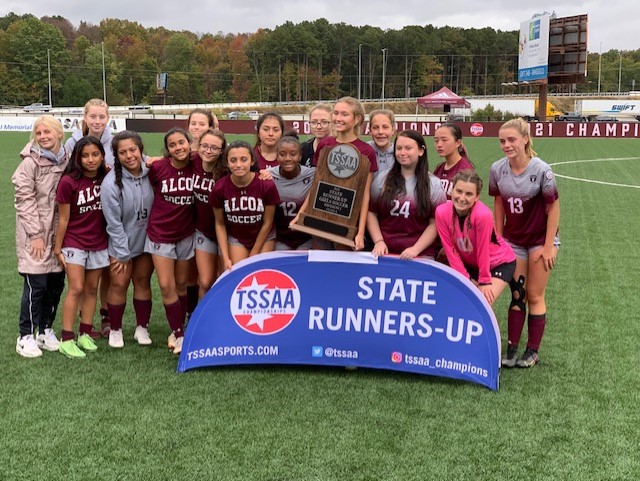 CHATTANOOGA – Alcoa went into the Class A championship game on Saturday down several players, as the Lady Tornadoes were without starter Lila Miller and leading scorer Charlotte Tymon suffered a high hamstring pull in the semifinals against CSAS. Alcoa battled hard, but it was not enough to overcome the skill of Merrol Hyde (18-2-1), as the Lady Tornadoes fell 2-0 in the final.

“We’ve played a couple down, but we just didn’t have depth,” Alcoa head coach Shane Corley said after the game. “We’ve tried to fill holes where we’ve had them and that’s what we’ve tried to do throughout the season.” 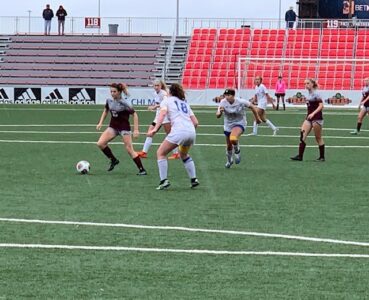 Alcoa’s Charlotte Tymon (15) tries to move past Merrol Hyde’s Carlee Zettergren (18) during the second half. Photo by Brian Hamilton

The Lady Hawks scored their first goal just six minutes into the game when Alcoa goalkeeper Ella Murr slightly missed a shot attempt by Sydney Arreza, which found its way into the net for a 1-0 Merrol Hyde lead.

Both teams would hold their own throughout the final 34 minutes of the first half, as the Lady Hawks took a 1-0 lead to intermission.

Merrol Hyde scored its second goal of the game in the 52nd minute, as Mary McIllwain got a shot past Murr for a 2-0 Lady Hawks lead.

Alcoa’s Tymon was able to get her first shot-on-goal with just under five minutes remaining in the match, which was saved by Merrol Hyde goalkeeper Hadley Marshall. The Lady Tornadoes just had two shots in the second half, compared to eight in the first half.

The Lady Hawks went in to win their first state championship by a score of 2-0. 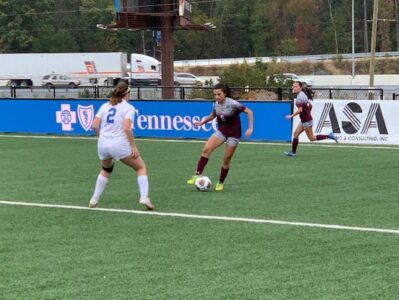 Kaleea Scales (5) pushes the ball against Merrol Hyde’s Sydney Rewa (2) during the Lady Tornadoes’ 2-0 loss in the Class A title. Photo by Brian Hamilton

“They’re good, give them credit,” Corley said. “They put 11 solid players on the field and played a good soccer match. We were probably a little bit weaker in a couple spots than they were, but our girls came out and played the way we wanted them to play.”

“Getting here was a big deal for this team,” Corley said. “We felt like we were kind of behind the eight-ball the whole season with our depth and a couple of injuries here and there, but they wouldn’t quit. They kept playing and they got us here, so good for them.”

Kaleea Scales will be one player whose contribution Alcoa will miss in 2022.

“Two of our seniors have been here the whole time and the other for three years,” Corley said. “Kaleea is a little bit of a different breed. She’s very good athletically and we will miss her presence on the field for sure.”