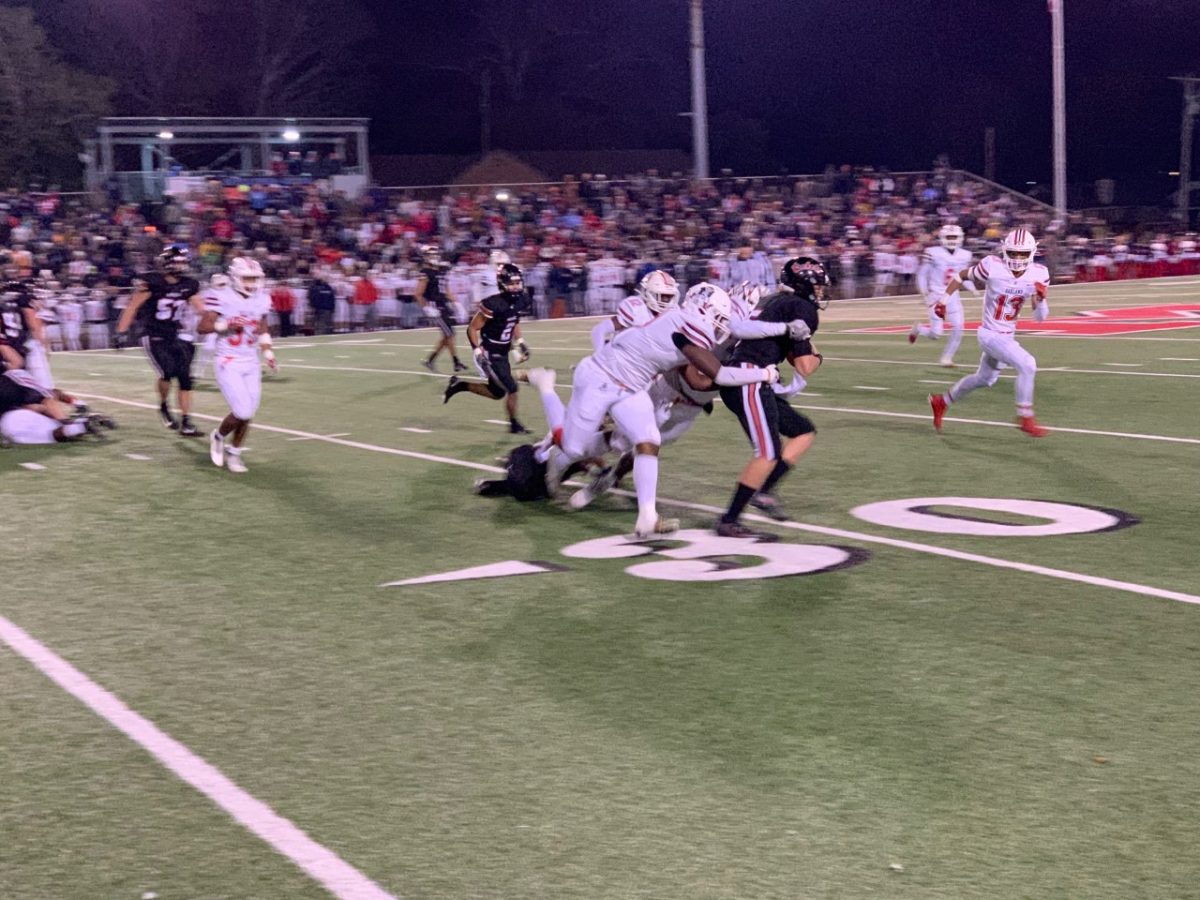 Maryville Quarterback Carson Jones is corralled by the Oakland defense during the Patriots' 24-14 win.

MARYVILLE – Oakland was able to hold off Maryville 24-14 to advance to its second consecutive state championship next Saturday. The Patriots used its vaunted running game to move the chains and chew up clock, handing Maryville its first home playoff loss since 1999, when the Rebels fell to Knox Central.

The two teams met for the eighth straight time in the Class 6A semifinals, and it was only the first time since 2014 that the road team won in the series. Both teams came into this matchup undefeated in 2020 and Oakland walked away with a 49-7 win, but the Rebels made it a much tougher game this year. 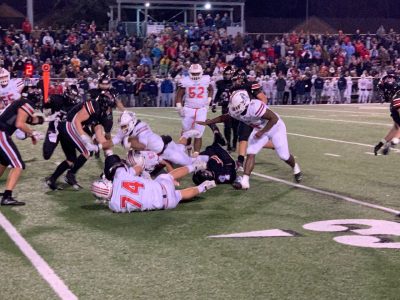 “Maryville has a heck of a team and they’re so well coached and play so hard,” Oakland head coach Kevin Creasy said after the game. “We just had to make one more play than they did.”
Maryville received the opening kickoff and pieced together a methodical drive, spanning nearly seven minutes, which was capped by a 1-yard touchdown run by quarterback Carson Jones. The Rebels would convert the extra-point attempt to lead 7-0 with 5:32 left in the first quarter.
While Maryville led 7-0 after one quarter of play, the Patriots had third-and-goal from the 6-yard line when play resumed.
Oakland would score on the first play of the second quarter on a 6-yard pass from Kade Hewitt to Marcus Bullard to tie the game at 7-7.
On the ensuing drive, Carson Jones calls his own number on a zone read, but fumbles going to the ground, which Oakland recovered at the Maryville 28-yard line.
Antonio Patterson scored on the next play from scrimmage, giving the Patriots a 14-7 lead with 10:45 left in the second quarter.
The Rebels then embarked on a scoring drive of their own, as Maryville converted a 4th-and-2 from the Oakland 42, and later converted on another 6-yard touchdown run by Jones, his second of the night.
Oakland was unable to muster any offense on their last possession of the first half and the two teams went to halftime knotted up at 14 apiece.
“We told them just to calm down,” Creasy said. “We’ve been in worse situations coming out of halftime and we’ve been behind a couple times against really good teams and I knew if we were made of the right stuff, we’d come out and fight and have a good second half.” 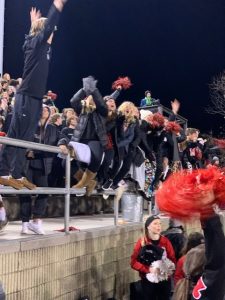 The Maryville student section erupts after a big stop late in the first half. Photo by Brian Hamilton

The Patriots took the second half kickoff and drove down the field, but were halted near the Maryville 30-yard line. Avery Rogers would boot a 49-yard field goal through the uprights, however, giving Oakland a 17-14 lead with 4:38 left in the third quarter.
“I thought that field goal (by Rogers), coming out from the 20-yard line, to drive down the field, that was a big field goal right there in the third quarter,” Creasy said. “That put a little pressure on them. We’ve got all the confidence in the world in him and I can’t believe he’s not up for Mr. Football, but the guy’s making 49-yarders in the fourth round of the playoffs, that takes guts.”
Noah Vaughn had a solid return for the Rebels on the kickoff, but Maryville was forced to punt shortly after crossing midfield, as the third quarter ended with Oakland leading 17-14.
Maryville junior safety Eli Hames went to the sideline with cramps on the ensuing drive and Hewitt attacked his side of the field on a deep pass to Isaiah Horton, who ran inside the 5-yard line.
Patterson ran for a 9-yard touchdown on the next play, giving Oakland a 24-14 lead with just under nine minutes left in the game.
Maryville’s next possession saw them get backed up in fourth-and-long and elect to punt with under six minutes left in the game. 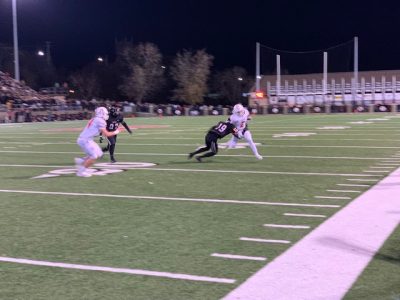 A Maryville defender attempts to take down Oakland’s Jordan James during the Rebels’ 24-14 loss. Photo by Brian Hamilton

The Rebels would never see the ball again, as Oakland drove inside the 20-yard line when Hewitt converted a first down on a quarterback sneak and kneeled on the ball to run out the clock.
The first half went exactly how we would have drawn it up,” Maryville head coach Derek Hunt said. “In the second half, Oakland made two or three more plays than we did and that was the difference.”
Oakland ran the ball 44 times for 218 yards during the contest, while Hewitt converted all five of his passes for 111 yards.
Maryville’s Carson Jones finished with just 58 yards passing on 8-of-12 passing, while rushing for the Rebels’ only two scores of the game.
The Patriots (14-0) will face Summit (14-0) in the state championship next Saturday night in Chattanooga for the Class 6A title.