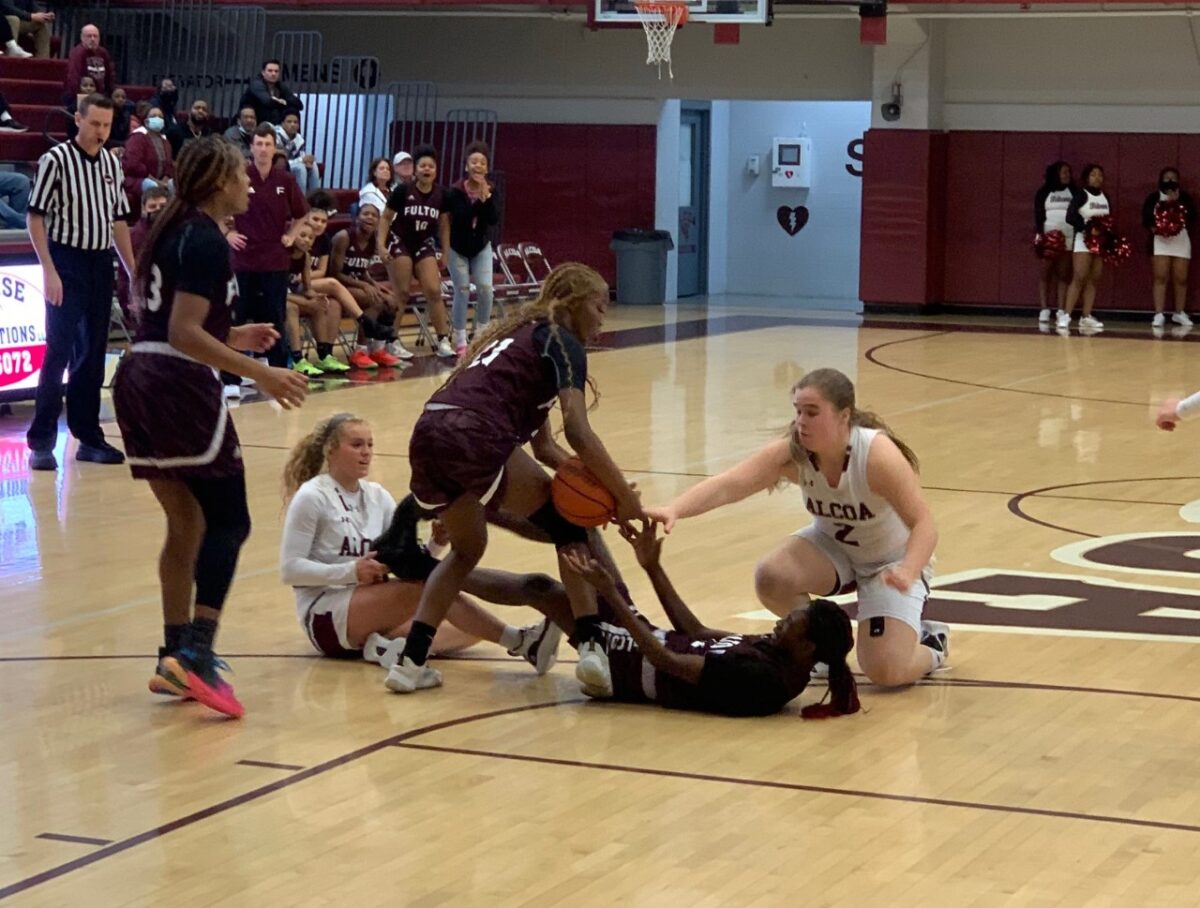 ALCOA – The Lady Tornadoes overcame a slow start offensively to pick up a 53-40 win over Fulton, as Karli Haworth scored 13 of her 21 in the second half and Macie Ridge scored 12 of her 19 after halftime. 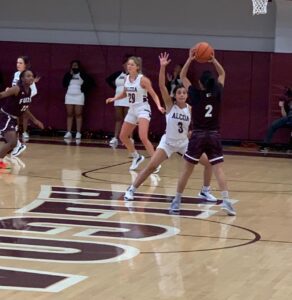 “There weren’t a whole lot of x’s-and-o’s adjustments (at halftime), but we did go over some things that we didn’t execute very well,” Alcoa head coach David Baumann said. “Not to take any credit or anything, but the girls just hit shots and that’s the difference. We started hitting some shots and we got a little bit of a lead and they had to come out and guard us in man (defense) and we knew with our two guards, they would have a hard time doing that.”

The Lady Tornadoes took a 9-4 lead after the first quarter, but saw Fulton put up 12 points in the second quarter, outscoring Alcoa 16-15. Jamia Simmons made two free throws with 25 seconds left in the first half to give the Falcons a one-point lead. Sammy Taylor rimmed out on a layup at the buzzer, sending Fulton to the half with a 16-15 advantage.

Alcoa came out playing much better in the second half, as Kara Pitts made a layup, followed by two free throws to give the Lady Tornadoes a 19-16 lead. Macie Ridge then drained a three to push the Alcoa lead to 22-16 with 6:40 left in the third, forcing a Fulton timeout.

Judea Taylor hit a layup for the Lady Falcons’ first points of the second half, cutting the deficit to 22-18. Ridge would respond with a basket on the other end, giving Alcoa a 6-point lead. Ridge missed a shot on the next trip down, but Keirstin Ensminger grabbed a rebound and put it in for a 26-18 lead.

Fulton would cut the lead to six with a pair of Judea Taylor free-throws, but a three by Karli Haworth increased the Alcoa lead to 29-20 with 4:50 left in the third.

A three by Macie Ridge gave the Lady Tornadoes a double-digit lead at 32-22, but Aailya Knighten drained a three to pull Fulton to within seven, at 32-25. The Lady Falcons were called for a blocking foul on the other end and Haworth sank both free-throws to make the score 34-25 with 1:30 left in the third quarter. 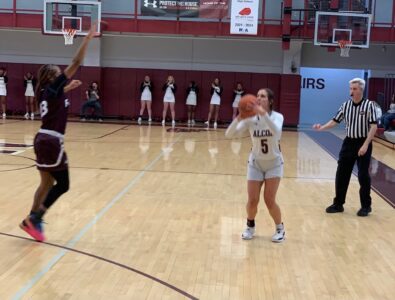 Macie Ridge (5) drains a long three-pointer during the 3rd quarter of Alcoa’s win over Fulton. Photo by Brian Hamilton

Sammy Taylor scored a basket with 10 seconds left in the quarter to make the score 34-27 and Haworth turned the ball over on Alcoa’s last possession of the third, leaving the Lady Tornadoes with a 7-point lead going into the final stanza.

Alcoa would go up 40-29 early in the fourth after a basket by Bella Daugherty and a pair of free throws by Pitts. Ensminger then sank a pair of foul shots as well, giving the Lady Tornadoes their largest lead at 45-32 with 4:17 left.

Fulton’s Sammy Taylor stole the ball from Ridge and made a layup to cut the Lady Falcons’ deficit to 45-34 and another steal and layup by Mayia Moore got the lead back to single digits, as Alcoa appeared to struggle with the full-court press. 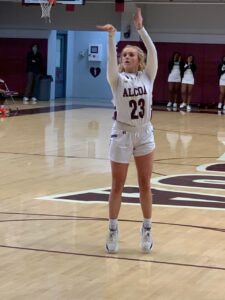 Alcoa’s Karli Haworth hits a free throw during the 4th quarter of the Lady Tornadoes’ 53-40 win. Photo by Brian Hamilton

Two free-throws by Haworth gave Alcoa an 11-point lead, at 47-36, but Fulton would respond with a three to cut their deficit to 47-39. The Lady Tornadoes were able to win going away, however, thanks to solid foul shooting down the stretch with a 53-40 win.

“The story of this game, without a doubt, was the defensive effort that we played with,” Baumann said. “Even in the first half, when we were struggling to score, we continued it throughout the game. We just played amazing defensive ball all night long.”