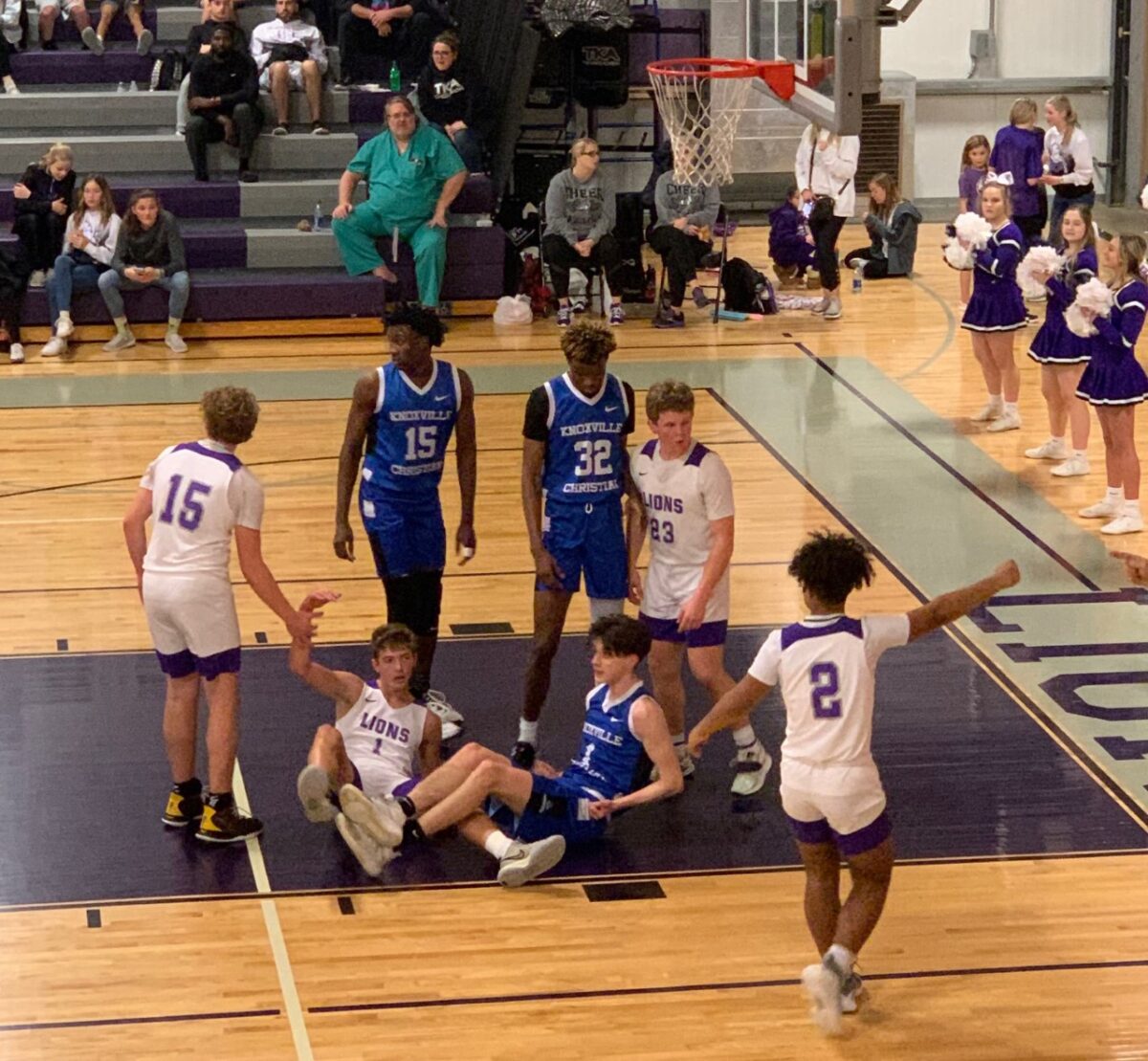 SEYMOUR – The King’s Academy faced the daunting task of having to go up against Knoxville Christian, who might just have more size than Maryville College. The Knights boasted 6-11 Kosi Mgbejiofor, 6-8 Ogbonna Agbo and 6-7 Paul Stegman. 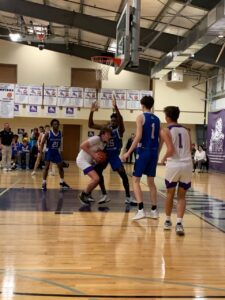 “We wanted to try and attack those guys and I think we did a pretty good job of that,” TKA head coach Sean Jones said. “I thought it was really smart of them to put the big at the top of the zone and I don’t think we attacked that hard enough at times. I wanted to spread them out and make them guard us and see if we could get downhill, but when you play a team like that, you’ve got to shoot it well from outside.”

The Lions held their own throughout the third quarter, but in the end, Knoxville Christian’s size was just too much, as the Knights went on to win 76-57.

Knoxville Christian got out to an early 4-0 lead after two baskets by Jamel Yarbrough. TKA’s Damjan Simun got the Lions on the board with a layup to trim the lead to 4-2.

Two more baskets by Yarbrough and Joel Morsi put the Knights ahead 8-2 with just under five minutes left in the first quarter. A three by Simun cut the Knoxville Christian lead to 12-6 with 1:44 remaining in the first.

Bennett Simerlen drained a three to put the Knights ahead 15-6, but TKA would go on a 4-0 run to end the quarter, capped by a Zeke Connaster layup, making the score 15-10 after one quarter.

Connaster was fouled and made the layup early in the second quarter, but the junior guard missed the free-throw, leaving the score at 15-12.

Harrison Rollins was later fouled inside by Knoxville Christian’s Kosi Mgbejiofor and split the pair of free-throws to cut the deficit to 18-14. The Knights would then go on an 8-0 run, taking a 26-14 lead on a steal and basket by Edoardo Grimaldi.

Knoxville Christian’s Ogbonna Agbo finished an inside feed with a dunk to give the Knights a 28-16 lead, followed by a Grimaldi three to lead 31-19 with 2:34 left before halftime. 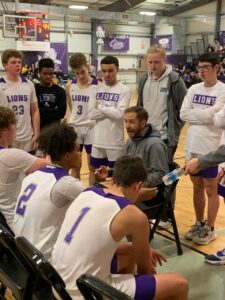 TKA coach Sean Jones calls timeout during the fourth quarter to try and rally his team. Photo by Brian Hamilton

Rollins drained a three with 19 seconds left in the first half, trimming the lead to eight and Jack Townsend would miss a basket at the buzzer, sending the Lions to intermission trialing 34-26.

Mgbejiofor started the third quarter with a fast break dunk off a steal to give Knoxville Christian a 10-point lead, but Rollins would convert two foul shots on the other end to make the score 36-28.

TKA’s Simun cut the Knights’ lead to 38-31 on a three, but Knoxville Christian would soon have the lead back to nine.

A three by Alijah Davidson cut the Lions’ deficit to 42-36 with 3:12 left in the third. On the next TKA trip down, Simun was fouled on a three-point attempt, but missed the first two free-throws before making the last one, making the score 42-37.

Connaster drained a three with 2:06 left in the third to cut the Knights’ lead to 44-41, forcing a timeout. Yarbrough would make a layup on the other end, however, pushing the Knoxville Christian lead back to five. Another Yarbrough layup with 36 seconds left in the period would give the Knights a 50-41 advantage going into the fourth.

The fourth quarter seemed to last forever, as each team committed double-digit fouls, resulting in a foul shooting contest. Knoxville Christian also began to feed Mgbejiofor in the paint, as TKA had no answer for the 7-footer. 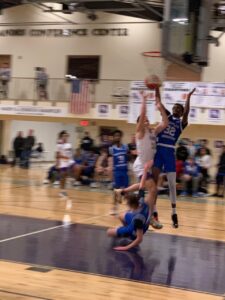 “To be quite honest, we just haven’t shot the ball very well from the line,” Jones said. “It’s not necessarily the flow of the game (being disrupted by fouls) that I’m frustrated with — it’s out shooting at the line. We haven’t done a very good of knocking our opportunities down. I think we were 19-of-34 tonight, which is just not going to get it done.”

A dunk by Mgbejiofor would put the Knights ahead 66-47 midway through the fourth quarter, followed by a Yarbrough steal and layup, pushing the lead over 20, as Jones was forced to call a timeout, down 68-47.

Mgbejiofor slammed his fifth and final dunk of the game with just under two minutes remaining to give the Knights a 72-51 lead, as Knoxville Christian went on to win 76-57.