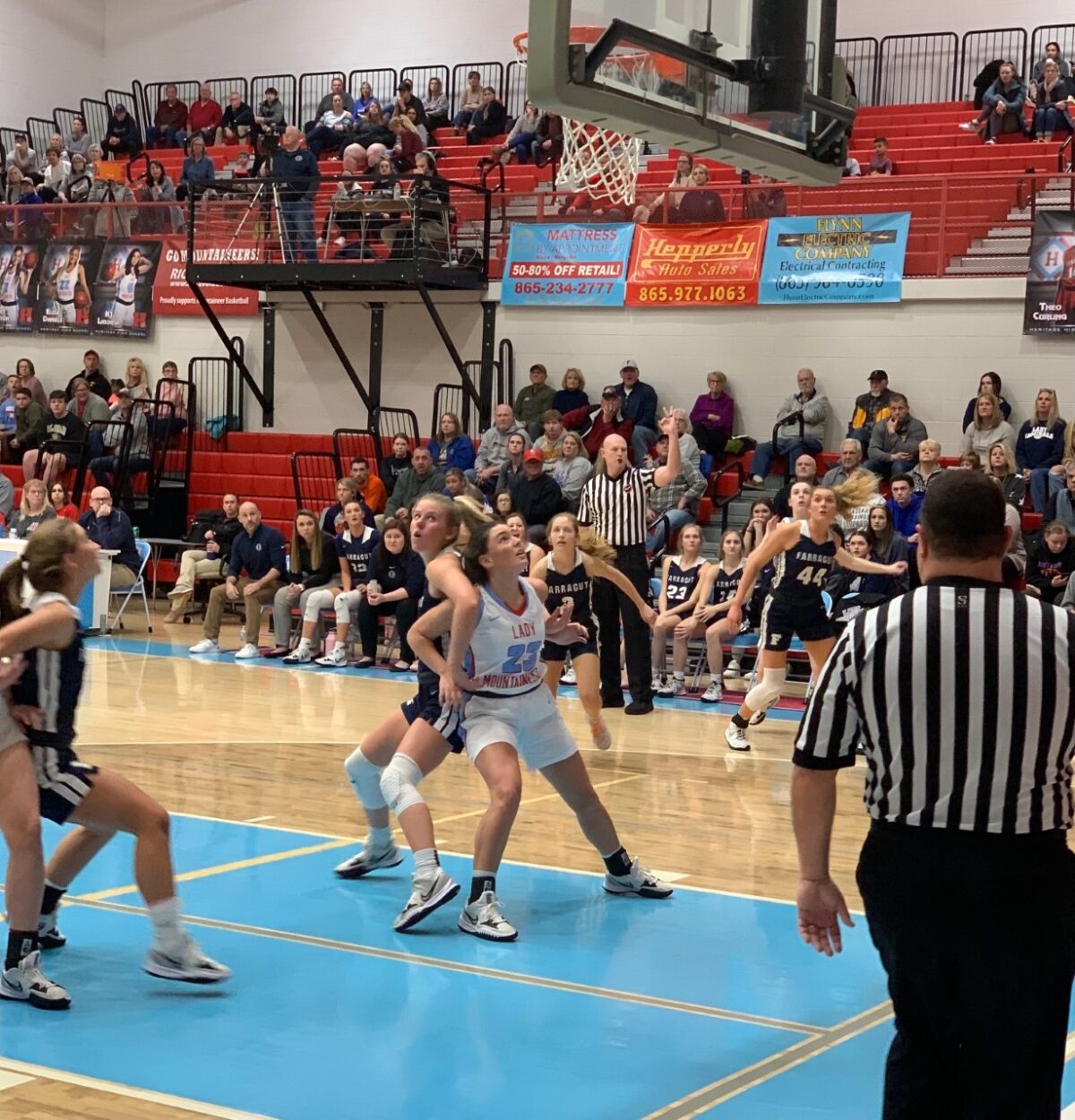 MARYVILLE – Heritage kept the Farragut scorers at bay for most of the game, but once Avery Strickland and Keeleigh Rogers got things going in the second half, the Lady Admirals pulled away for a 59-52 win and a third shot at Bearden in the district championship. 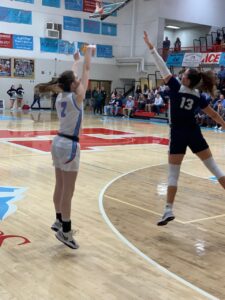 “We played them in the regular season, tooth and nail, and they beat us by four both games because we didn’t hit a few shots to win the game,” Heritage coach Rick Howard said. “I thought tonight we just missed some crucial layups and a couple threes that you’ve gotta hit. In really big games, man, you’ve gotta hit shots. We didn’t.”

Heritage got out to an early 3-2 lead in the first quarter, but Farragut would go ahead 5-3 when Avery Strickland drained two free throws with 3:42 left in the period.

Ashlyn Sheridan hit a turnaround jumper to put the Lady Admirals ahead 7-3 with 2:40 remaining in the first. A three by Bailey Hamilton would pull the Lady Mountaineers to within 7-6 with 27 seconds left.

Farragut was called for a travel while trying to hold for the last shot, turning the ball over to Heritage with under 10 seconds left, but Bekah Gardner missed a buzzer-beating three. The Lady Mountaineers would trail 7-6 after one quarter.

A jumper by Heritage freshman Carsyn Swaney would cut the Lady Mountaineers’ deficit to 9-8, but Farragut would go on a 5-0 mini run to make the score 14-8 with 5:42 left in the second quarter.

Olivia Boyce hit a layup to end the run and make the score 14-10, followed by a long three by Gardner to pull Heritage to within one, at 14-13 with 2:49 left before halftime.

A pair of Strickland free throws would put Farragut ahead 16-13, followed by a Keeleigh Rogers layup to push the lead to 18-13 with 2:18 left.

Gardner made a long two, which Hamilton followed up with a layup to cut the Farragut lead to 18-17.

The Lady Admirals lead 20-17 when Hamilton drained a corner three with 20 seconds left in the half, tying the game at 20, but Strickland would hit a buzzer-beating three on the other end to send Farragut to halftime with a 23-20 advantage.

Heritage would open the third quarter with a 7-0 run, which was capped by a Halle Walters three, giving the Lady Mountaineers a 27-23 lead, forcing Farrgut head coach Jason Mayfield to call a timeout.

The Lady Admirals would nail a three coming out of the timeout, trimming the Heritage lead to 27-26, but Heritage would extend the lead back to 29-26 on the next possession, as the teams began to speed up their pace in the second half. 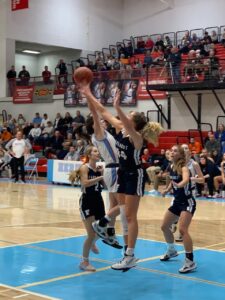 Howard said he warned his team about getting into a shootout with the Lady Admirals, but as the third quarter progressed, it appeared to be heading in that direction. Farragut was able to start getting to the free throw line and that helped get top scorers Strickland and Rogers in a rhythm. The Lady Admirals finished 26-for-30 at the foul line.

“Defensively, in the first half, we played great, but we didn’t put them on the line,” Howard said. “Of course, they did shoot a lot of free throws. Half their points were from the line, and you just can’t keep putting good free throw shooters at the line. I don’t know how many free throws we shot, but it wasn’t near 30. You’ve gotta be smart and not foul.”

Rogers made a layup to cut the Heritage lead to 29-28 and then was fouled after a steal and fast-break and made both free throws to put Farragut back in front 30-29 midway through the third.

Strickland was fouled with just under three minutes left in the third and sank both free throws to extend the Lady Admirals’ lead to 32-29.

The foul shots kept coming for Farragut in the third quarter, however, as Rogers hit another pair of free throws to give the Lady Admirals a 34-29 advantage.

Gardner would turn the ball over on the next Heritage possession, as the point guard was called with a 5-second closely guarded call, turning the ball back over to Farragut.

McCall Willis grabbed a rebound and was fouled on the putback, putting the Lady Admirals in front 37-29 after missing the free throw, capping an 11-0 run for Farragut. Heritage called timeout with just over a minute left in the third.

K.J. LaSorsa hit a three to cut the Lady Admirals’ lead to 37-32 with 12 seconds left in the quarter, but Farragut would again hit a shot at the buzzer for a 39-32 lead going into the fourth quarter. 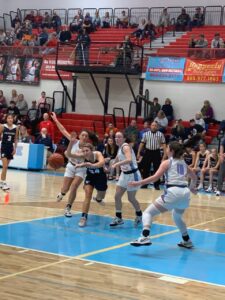 Farragut’s Keeleigh Rogers (34) tries to get a pass off while Heritage defenders collapse in the lane. Photo by Brian Hamilton

A rebound and layup by Farragut’s Annalise Bishop would stretch the Lady Admirals’ lead to 41-32 with 5:22 left, but LaSorsa answered on the other end with a 3-pointer to cut the Heritage deficit to 41-35.

Strickland was fouled on the next trip down the court and drained both free throws to make the score 43-35. Three more Farragut free throws would stretch the Lady Admirals’ lead back to double digits at 46-35.

LaSorsa hit another three to trim the Farragut lead to 46-38 with just over three minutes left in the game. A pair of Willis free throws would increase the Lady Admirals’ lead back to 48-38 with 2:55 remaining.

Another Heritage three would pull the Lady Mountaineers to within 48-41, but once again, Farrgut answered with an Annie Priest layup, making the score 50-41 with 2:08 left.

Heritage continued to launch and hit threes down the stretch, but the Lady Mountaineers were just unable to get stops on the other end. Another Heritage three — which cut the deficit to 53-44 — was followed by a Bishop layup to make the score 55-45 with 55 seconds remaining.

Swaney would score four straight points on a layup and a rebound and putback, cutting the Farrgut lead to 55-47 with under 10 seconds left.

The Lady Mountaineers, down eight, still elected to give a hard foul to the former West Virginia signee, who made both free throws for a 59-49 Farragut lead.

Gardner would sink a long three at the buzzer, but it was too little, too late, as the Lady Mountaineers fell 59-52.

The Heritage girls never quit, however, fighting until the final horn sounded, although the outcome was already decided.

“They’ve got probably two D-1 (prospects) and two D-2 kids, and I’ve got a junior college kid, that’s about all I’ve got over here,” Howard said. “I’ve got a bunch of hard-working kids that give their heart and soul for us and this program. That’s all you can ask, playing in a game like that with all those kids. Farragut’s got a great chance to go to state and do something good down there as well.”