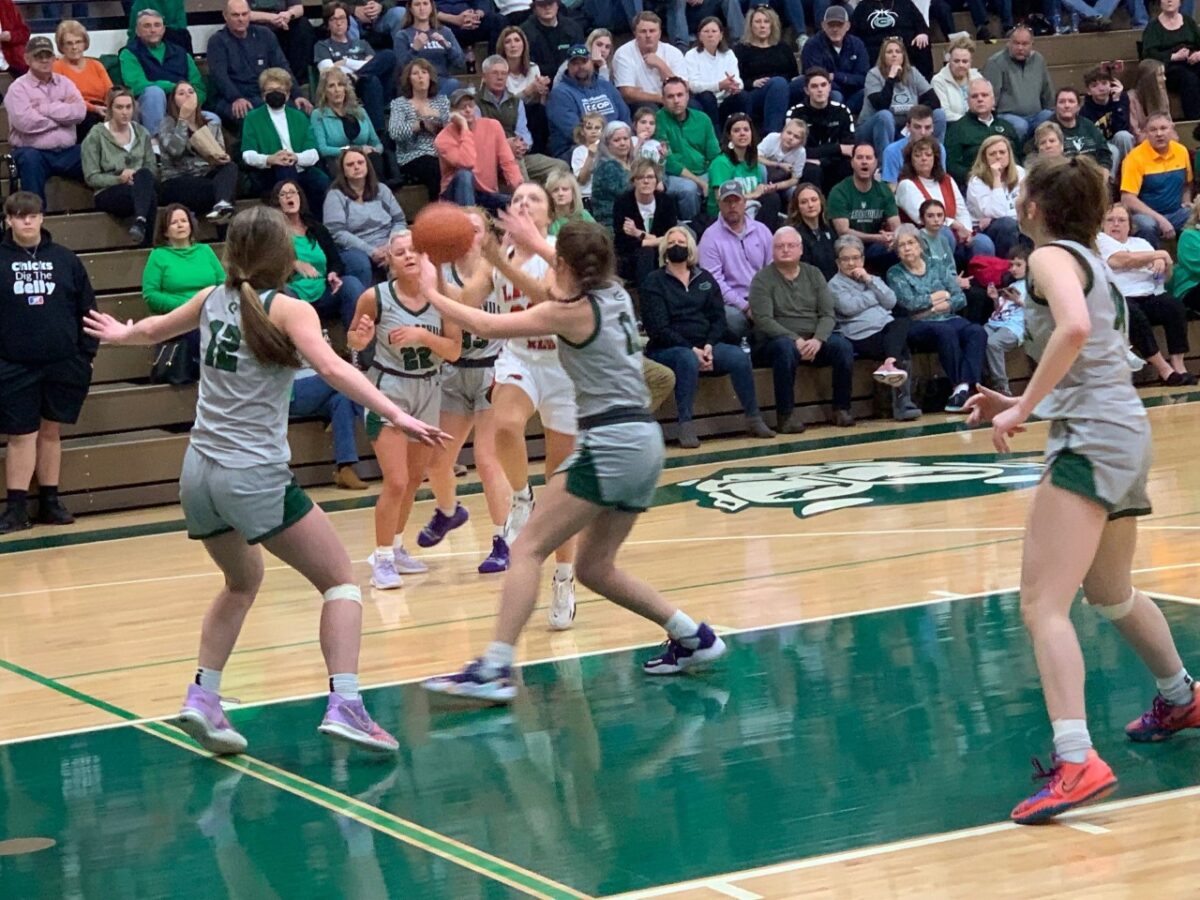 GREENEVILLE – Cocke County got off to a hot start, but could not overcome a third quarter, which saw them fall into a 14-point deficit going into the fourth. The Lady Red cut the deficit to two with just over a minute remaining, but it was too little, too late, as Greeneville came away with a 60-56 win and a trip to the Class 3A District 2 title game. 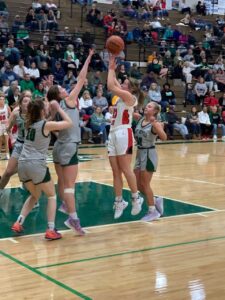 Cocke County’s Camryn Halcomb (23) goes up for a floater during the fourth quarter of the Lady Red’s 60-56 semifinal loss to Greeneville. Photo by Brian Hamilton

“We just quit picking up the ball and they were able to make a bunch of shots and take advantage of what we were doing wrong,” Cocke County coach Chris Mintz said of the third quarter.

The Lady Red pushed their lead to 19-14, but Grace Hayes hit a layup, followed by a Lauren Bailey to give Greeneville with a 20-19 Cocke County lead with 1:56 remaining.

Cofield made a driving layup would give Cocke County a 23-22 advantage, but Greeneville scored on their next trip down.

Holcomb drove the lane for a layup to give the Lady Red a 25-24 lead with 34 seconds left in the first quarter.

Greeneville took a 26-25 lead to intermission, as Lauren Bailey finished the first half with 14 points and Halcomb led Cocke County with eight.

The Lady Greene Devils hit Cocke County in the mouth coming out in the third, as Greeneville took off on a 9-2 run, leaving the Lady Red trailing 35-27 with 4:14 left in the third quarter.

Halcomb would finally quiet the Greeneville run with a 3-pointer, trimming the Greeneville lead to 35-30. Bailey nailed a three on the other end to give the Lady Greene Devils a 38-30 lead with 2:28 left in the third. The triple by Bailey would set off a 7-0 Greeneville run.

Gracie Gregg hit a layup and was fouled, converting the 3-point play, trimming the Lady Devils lead to 44-33. A three by Bailey would stretch the lead to 47-33 at the end of the third stanza. 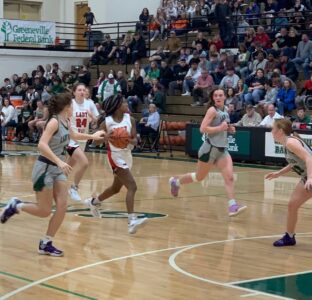 Jaylen Cofield (5) looks for a teammate to pass to during Cocke County’s District 2 semifinal loss to Greeneville. Photo by Brian Hamilton

Having to come back against Greeneville was nothing new for the Lady Red, as they came back from down seven with just over two minutes left to win 70-62 against the Greene Devils at home on February 8.

“We don’t ever panic,” Mintz said. “We’ve got so many scorers they we’re comfortable, but we just had to get going. They finally got going there near the end and started making some wide-open shots.”

Cocke County started to get hot from beyond the arc in the fourth quarter, as Clevenger nailed another three to make the score 49-39 with six minutes left in the fourth.

Cofield forced a jump ball on the next Greeneville possession, giving the ball back to the Lady Red. A runner by Halcomb cut the Cocke County deficit to 49-41 with 5:10 left in the game.

The Lady Greene Devils’ lead was back to double-digits when Niethammer hit a basket underneath to make the score 54-46 with 2:56 remaining.

Halcomb then drained a three to cut the Lady Red deficit to 54-49. Clevenger drew a charge on Carter on the other end and capitalized on the turnover, as the senior nailed a three to make the score 54-52 with just over one minute remaining.

Bailey was fouled in the post by Halcomb and the junior made both shots to put Greene County ahead 56-52.

Halcomb was fouled on a drive to the basket and made both shots to pull the Lady Red back to within two, at 56-54 with 53 seconds left. 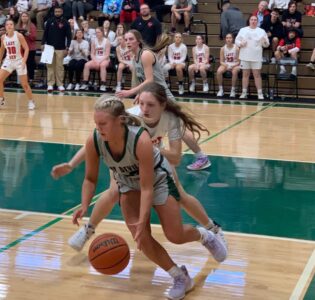 Delana DeBusk (22) heads up-court while being pressured by a Lady Red defender. Photo by Brian Hamilton

Delana DeBusk was fouled on the next Greeneville possession and made both foul shots, pushing the Lady Greene Devil lead back to two possessions, at 58-54.

Halcomb missed a jumper on the other end, but Gracie Gregg stole the ball at halfcourt and passed to Cofield for a layup, making the score 58-56 with only three seconds left.

Bailey was fouled on the inbounds with one second left and sank both free throws, giving Greeneville a 60-56 win, advancing them to the district championship.

Lauren Bailey led all scorers with 23, while Grace Hayes finished with 10 and Chloe Marsh added eight.

“Lauren’s a great scorer and we tried to double her every time she gets the ball,” Mintz said. “I thought we did a pretty good job on her, but there were some shots in transition that we couldn’t catch her on, but she’s just such a good player.”