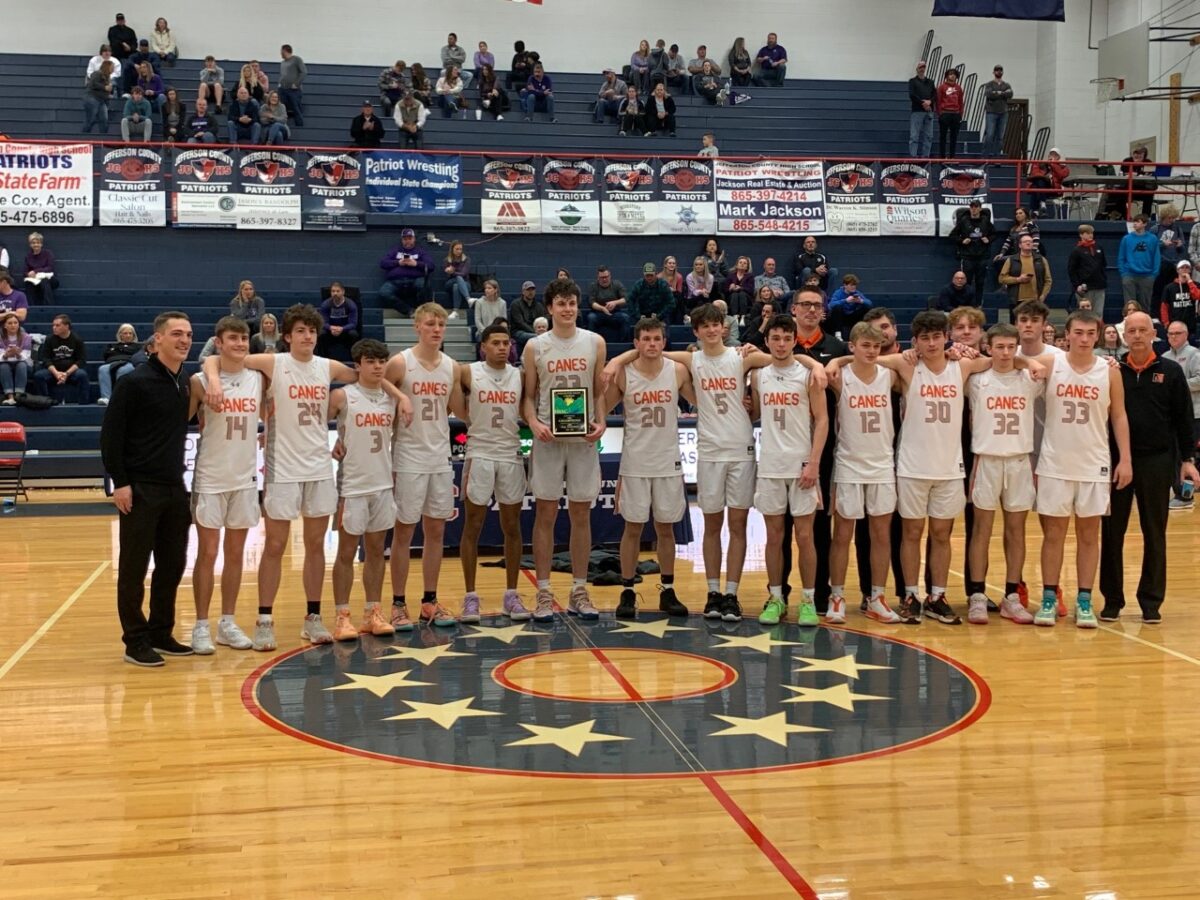 DANDRIDGE – Morristown-East trailed for much of the game, but when the Hurricanes needed their leader Micah Simpson to answer the call, the senior calmly stepped to the free throw line and knocked down crucial shots. 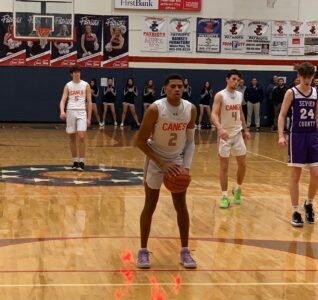 “I was just trying to get to play with the confidence they’ve had all year and reminding them that we’ve won 26 games and we’ve played a tough schedule and have been in adverse situations before,” Morristown-East coach Alden Collins said. “This isn’t anything that we haven’t seen, and we’re prepared for this moment. We have to go out with confidence and play like we’re the better team because we feel like we’re the better team.”

Morristown-East would come away with a 41-37 over Sevier County win after falling to the Smoky Bears earlier this month. It was also the Hurricanes’ first district championship since 2018.

“We had our chance, and I couldn’t be more proud of my guys,” Sevier County coach Ken Wright said. “They gave everything they had.”

Morristown-East started the scoring, as Micah Simpson was ready to bring down the house with a dunk on the first Hurricane possession before being fouled. The UT-Martin football commit knocked down both foul shots for a 2-0 lead.

Kris Kendrick hit a layup on the other end for Sevier County, tying the game at 2-2. Morristown-East would respond, however, as Braden Ilic made a layup to give the Hurricanes a 4-2 lead with 5:45 left in the first.

Danny Stanton would hit a layup over Ilic to knot the game at 4-4 with 5:13 left in the quarter, followed by Kendrick completing a conventional 3-point play for a 7-4 lead.

Simpson drilled a three to tie the game at 7-7 with 4:12 left in the first quarter and Sevier led again before Kyle Cloninger made a layup to tie it up again at 9-9.

On the next Morristown-East possession, Simpson tossed a pass inside to 6-10 Ilic, who went above the rim for a two-handed jam before the 6-5 Cooper Takacs met him at the height of his jump and blocked the attempt.

“Cooper played a heck of a game,” Wright said. “I thought we were controlling the boards early and that’s what kept us in the lead. We just haven’t shot the ball well here down the stretch and the whole week, shots just haven’t fallen for us, but we battled.”

Luke Dougherty made a layup off a rebound to put the Hurricanes up 11-9 with just over one minute left in the first, but Sevier County would answer when Takacs drilled a three with 14 seconds left in the period, sending the Smoky Bears into the second quarter with a 12-11 lead.

Sevier County took an early 16-11 lead in the second quarter when Takacs made a layup. A basket by Caleb Hall of Morristown-East would pull the Hurricanes to within 16-13, but Kendrick made a jumper to push the lead back to 18-13 with 4:36 left in the half.

Ilic made a floater on the next Morristown-East possession to pull the Hurricanes to within 18-15, followed by a Simpson layup to cut the deficit to 18-17 with 45 seconds left before halftime.

Takacs made a layup with five seconds left in the first half for a 20-17 lead and Simpson narrowly missed a layup at the halftime buzzer, sending the Smoky Bears to intermission with a 3-point lead.

Sevier County came out strong again in the third quarter, as Takacs tipped in a rebound over Ilic to put the Smoky Bears ahead 22-17. 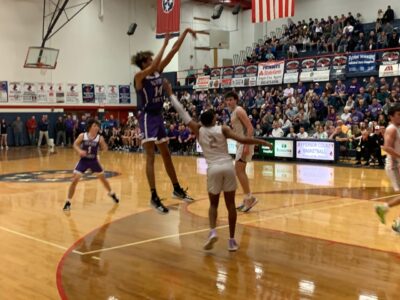 A three by Reed Ownby, followed by a Braxton Allen jumper gave Sevier County a 31-24 lead with just 58 seconds remaining in the third quarter. On the next possession, Ilic grabbed a rebound and was fouled on the putback, converting the 3-point play to cut the Hurricane deficit to 31-27.

The Smoky Bears were holding for the final shot of the third quarter when David Greene committed a foul, turning the ball back over to Morristown-East. The Hurricanes missed a three at the buzzer and Sevier County led 31-27 after three quarters.

Sevier County came out of a timeout and Takacs grabbed a steal and was fouled on the layup attempt. The senior missed the first free throw and made the second, tying the game at 32-32 with 5:16 left in the fourth quarter.

Hall missed a layup and grabbed his own rebound and stuck it in for a 34-32 Morristown-East advantage with 4:03 left. Two Simpson free throws would increase the Hurricane lead to 36-32.

Simpson then drew a foul on a drive to the rim and was fouled, making 1-of-2 foul shots for a 37-32 lead. The game was starting to slip away from Sevier County and everyone in the gym knew it.

Another steal and fast break sent Simpson to the line again, where the senior again split the pair of free throws to make the score 38-32, as Morristown-East was now on a 14-1 run, dating back to the third quarter.

Takacs hit two free throws to pull Sevier County back to within 38-34 with 1:03 remaining, but Simpson again made a pair of free throws to increase the lead to 40-34.

Ownby was fouled on a layup and converted the 3-point play, as the Smoky Bears now had a one-possession game at 40-37 with 35 seconds remaining.

Ilics missed two free throws on the ensuing possession, as Greene grabbed the rebound for Sevier County and called timeout with 14 seconds remaining.

Ownby went on a drive to the basket and had a layup just roll off the rim. The rebound went to the Hurricanes’ Luke Dougherty, who was fouled with three seconds left.

The senior missed the first free throw and nailed the second one, securing a 41-37 win and the district championship. It also secured the most wins by a team in school history with 27. 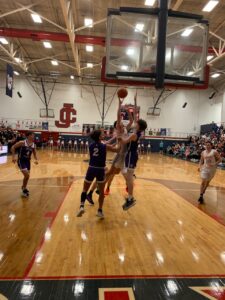 The Hurricanes’ Kyle Cloninger goes up for a layup over Sevier County’s Danny Stanton (2) and Reed Ownby (24). Photo by Brian Hamilton

“It’s a very special group,” Collins said of this year’s record setting team. “I’ve been fortunate enough to be with these kids, a lot of them since they’ve been in sixth grade. A lot of time in the gym, a lot of butt chewings from me, and a lot of celebrations and just adding to the memory list. You know, to go down as one of the greatest in school history is something special. It’s nothing that we’ve ever talked about as a group, but I think that they’re very deserving of that recognition.”

Micah Simpson led all scorers with 17 points, while Cooper Takac finished with 16 to lead Sevier County. Brandon Ilic added 10 for Morristown-East, while Kris Kendrick scored nine for the Smoky Bears.

“He’s great and I’m happy he was in orange and black tonight,” Collins said of Simpson after the game. “His confidence to go out there and control the game…we fight really hard to go out and get the lead and he’s great on the ball, to be able to control it. He wants to go to the free throw line and shoot those free throws in the big moment and he’s great on the defensive end too. He created some turnovers for us to kind of push ahead too. I thought he was phenomenal as a closer.”

Sevier County was without all-district performer Caleb Tarwater, who was sidelined for two games after committing two technical fouls in the Smoky Bears’ season finale loss at Jefferson County.

“Sure, absolutely I wish I would have had him, but he’s got to learn to keep his cool better,” Wright said after the game. “We’ve got an all-district player on the bench in street clothes.”