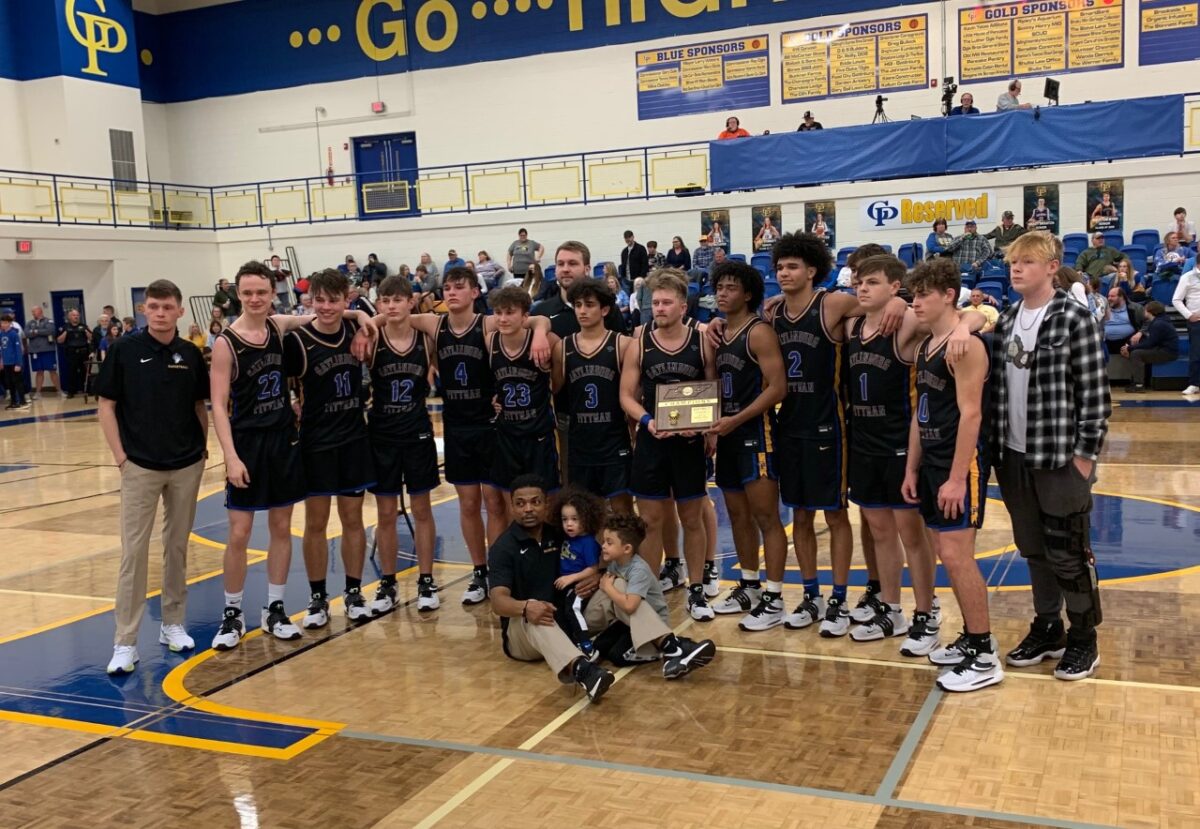 GATLINBURG – Gatlinburg-Pittman jumped out to a 9-0 lead and never trailed, as the Highlanders won 81-56 to win their second consecutive district championship. Gatlinburg-Pittman withstood a heavy punch by Alcoa in the second quarter, before going on a 14-0 run to lead by 16 at the half. The Highlanders blew the game open in the third quarter, leading by as many as 31 points. 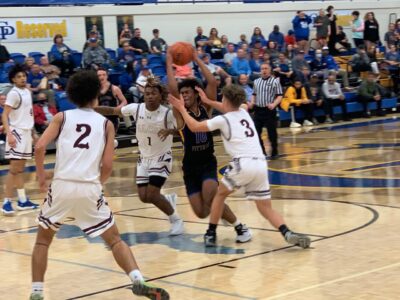 Four starts graduated from last season’s district championship team, with Houston Byrd as the only holdover in the starting lineup. One year later, with a retooled starting lineup, and a freshman phenom in Ty Glasper, the Highlanders are once again on top in District 1.

“As a coach, that’s the goal every year (to win the district),” Gatlinburg-Pittman head coach Rashid Moore said. “It was a year later, and I didn’t know how the guys were going to develop. I didn’t know who we would have come in as freshman and all that stuff, but once we got to summer, we felt pretty good about it. That’s an honest answer.”

Ty Glasper scored the first two points for Gatlinburg-Pittman, followed by a Houston Byrd 3-pointer for a 5-0 Highlander lead.

Grady Branton scored a layup, followed by a jumper by Glasper to give Gatlinburg-Pittman a 9-0 lead, forcing Alcoa coach Ryan Collins to take a timeout.

The Tornadoes would finally get on the board with 5:25 left in the first quarter, trailing 9-2. Glasper made another layup on the other end, extending the Highlanders’ lead to 11-2.

Jordan Harris scored on a layup for Alcoa, making the score 13-5 with 3:07 left in the first. Another Tornadoes layup by Jahvin Carter would trim the Gatlinburg-Pittman lead to 13-7 with 2:44 remaining.

A layup by Alcoa’s Luke Cannon with six seconds left in the period would cut the Tornadoes’ deficit to 18-12 after one quarter. 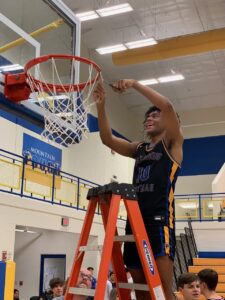 Terrence Dorsey would drain a three to open the second quarter, making the score 18-15. Gatlinburg-Pittman’s Carlos Orr would grab a couple rebounds under the goal and finally for the basket to go, putting the Highlanders up 20-15.

Carter came down on the other end and nailed another three, cutting the Highlanders’ lead to 20-18. Gatlinburg-Pittman would have an answer, however, as Byrd made a bucket to extend the lead to 22-18.

Dorsey’s next three would hit the front rim, bounce straight up, and through the net, as the Tornadoes pulled to within 1-point, at 22-21 with 4:53 left in the half.

Byrd answered with a three of his own, giving Gatlinburg-Pittman a 25-21 lead. Two free throws by Glasper gave the Highlanders a 27-22 lead.

A layup by Dorsey would trim the Gatlinburg-Pittman lead to 27-25, but the Highlanders would end the half on a 14-0 run during the last three minutes.

The run began when Jackson DeSear knocked down a pair of free throws for a 29-25 lead. Orr made a turnaround jumper, followed by a three by Byrd, making the score 34-25.

Glasper then made a driving layup to extend the lead to double-digits, at 36-25, with just over a minute remaining until halftime.

Another drive by Glasper would give Gatlinburg-Pittman a 38-25 lead with 50 seconds to go. Alcoa’s Elijah Cannon had an opportunity to end the Highlander run but missed both free throws.

Branton nailed a long three with under 10 seconds left in the first half, sending Gatlinburg-Pittman to the locker room with a comfortable 41-25 lead. 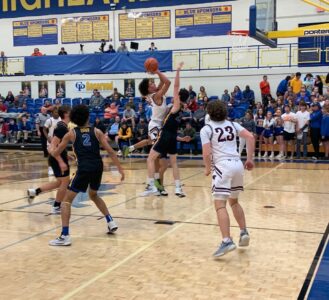 Alcoa’s Jahvin Carter (2) goes up for a shot against Gatlinburg-Pittman’s Grandy Branton (22). Photo by Brian Hamilton

“We’ve played quite a few games this year and we had a few games where we surrendered leads, particularly the Halls game during the Christmas tournament,” Moore said. “We had about a 14- or 15-point lead and they had the last shot to beat us and we just kind of referenced that at halftime.”

Alcoa came out of the locker room and opened the third quarter with a 6-1 run. Carter came out and scored a layup in the third quarter to make the score 41-27. A free layup by Dorsey would pull the Tornadoes to within striking distance again, at 42-31.

Orr grabbed a rebound and put it in the hoop, while getting fouled. The sophomore converted the traditional 3-point play, giving the Highlanders a 44-31 lead.

A corner three by Branton extended Gatlinburg-Pittman’s lead to 47-33 with just under three minutes left in the third. A Glasper basket would make the score 49-33, capping a 7-2 Highlander run.

Dorsey hit a three to pull Alcoa to within 49-36, but Glasper drove inside for another basket and a 51-36 lead.

Byrd grabbed a steal and passed it ahead to DeSear for a layup, putting Gatlinburg-Pittman ahead 55-39. A rebound and layup by Glasper would put the Highlanders ahead 57-41 with 2:14 left in the third.

Carter made a finger roll to cut the Gatlinburg-Pittman lead to 57-43, but the Highlanders would take a 20-point advantage into the fourth quarter, leading 65-45.

Two free throws by Orr would extend the Gatlinburg-Pittman lead to 71-47, followed by a backdoor pass to DeSear for a 73-47 advantage.

Orr found Whittman Whaley for a layup, putting the Highlanders ahead 75-47. Gatlinburg-Pittman would stretch the lead all the way to 30, as the Highlanders led 77-47 before Dorsey hit a three with 4:18 left to cut the Alcoa deficit to 77-50.

Glasper drove and was fouled on a drive, as the freshman sank both free throws for an 81-50 with just over three minutes left. Both teams would empty their benches down the stretch, as the Highlanders went on for an 81-56 win and a second consecutive district championship. 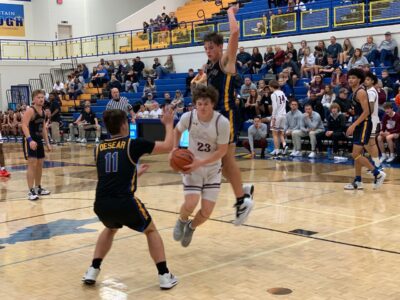 Eli Cannon (23) tried to get to the rim, while Jackson DeSear (11) and Tegan Avera (0) defend. Photo by Brian Hamilton

“He’s definitely ahead of his time,” Moore said of Glasper. “First and foremost, he’s extremely coachable. He keeps his head; he’s never been disrespectful. He’s always here when he’s supposed to be and has a 4.0 GPA. He’s just a coach’s dream, really. I mean, that’s as simple as I can put it.”

Terrence Dorsey led Alcoa with 17 points, while leading scorer Jahvin Carter was held to just 16 on the night.

“The start was not ideal for us,” Alcoa head coach Ryan Collins said. “We got down 9-0 and honestly against a good team, you can’t dig yourself in a hole and we’ve done that now twice up here (at Gatlinburg-Pittman). With that said, I thought our response to the initial 9-0 run was really good. At the end of the half, everything that we just put together to bridge the gap and get (the deficit) to two, we just absolutely went away from it. If you look at the difference in the ballgame, that was just like a knockout punch and that’s unfortunate.”