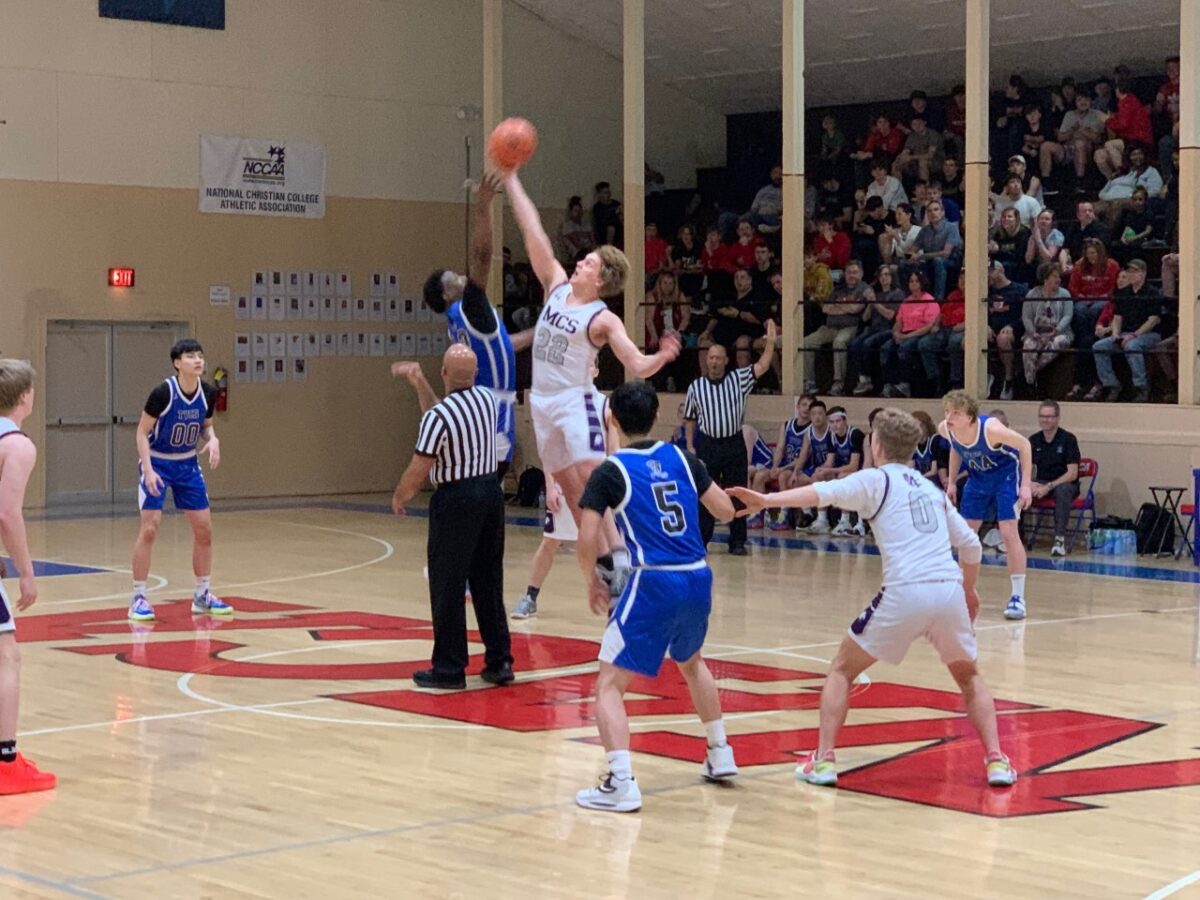 DAYTON – Maryville Christian found itself down 19 early in the fourth quarter against Teays Valley Christian (WV) and West Virginia commit Josiah Davis, but the Eagles gave a valiant comeback effort, pulling to within four late in the game, but came up just short, falling 73-65 in the NACA Division 5 Championship.

Davis would have his way in the paint, throwing down a thunderous dunk late in the game, on his way to 34 points and tournament MVP. 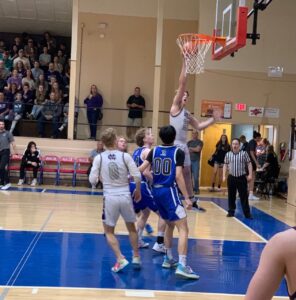 “We wanted to eliminate his presence in the paint,” Maryville Christian coach Brian Turbyfill said. “He has great bounce and is a fantastic athlete and finished really strong at the rim, so we wanted to force him to score from outside, but at the end of the day, there’s a reason he’s going to West Virginia next year. He’s a phenomenal athlete and deserves all the credit that he gets. We tried to eliminate his inside presence, but he still did what he needed to do to help his team win.”

“He has worked his butt off and he’s a smart basketball player, so he was able to find the passing lanes and we needed him to knock down those shots and that’s what he did for us,” Turbyfill said of Hudson’s first quarter play.

Hudson finally got Maryville Christian on the board with 5:47 left in the first quarter with a deep three to make the score 5-3. Hudson would hit another three to trim the Teays Valley lead to 7-6.

The Eagles would take an 8-7 lead when Ryan English made a baby hook, but Fu answered with another 3-pointer to give the Lions a 10-8 advantage.

English would make a layup on the other end to tie the game at 10-10 with 4:14 left in the first. Davis answered with a spinning layup to put Teays Valley up 12-10.

Hudson would hit his third 3-pointer of the game with 3:09 left in the first quarter, giving Maryville Christian a 13-12 lead. Josh Goins then nailed a three to extend the Eagles’ lead to 16-12.

Fu would hit his third 3-pointer of the night with just under one minute left in the first quarter, cutting the Lions’ deficit to 16-15. 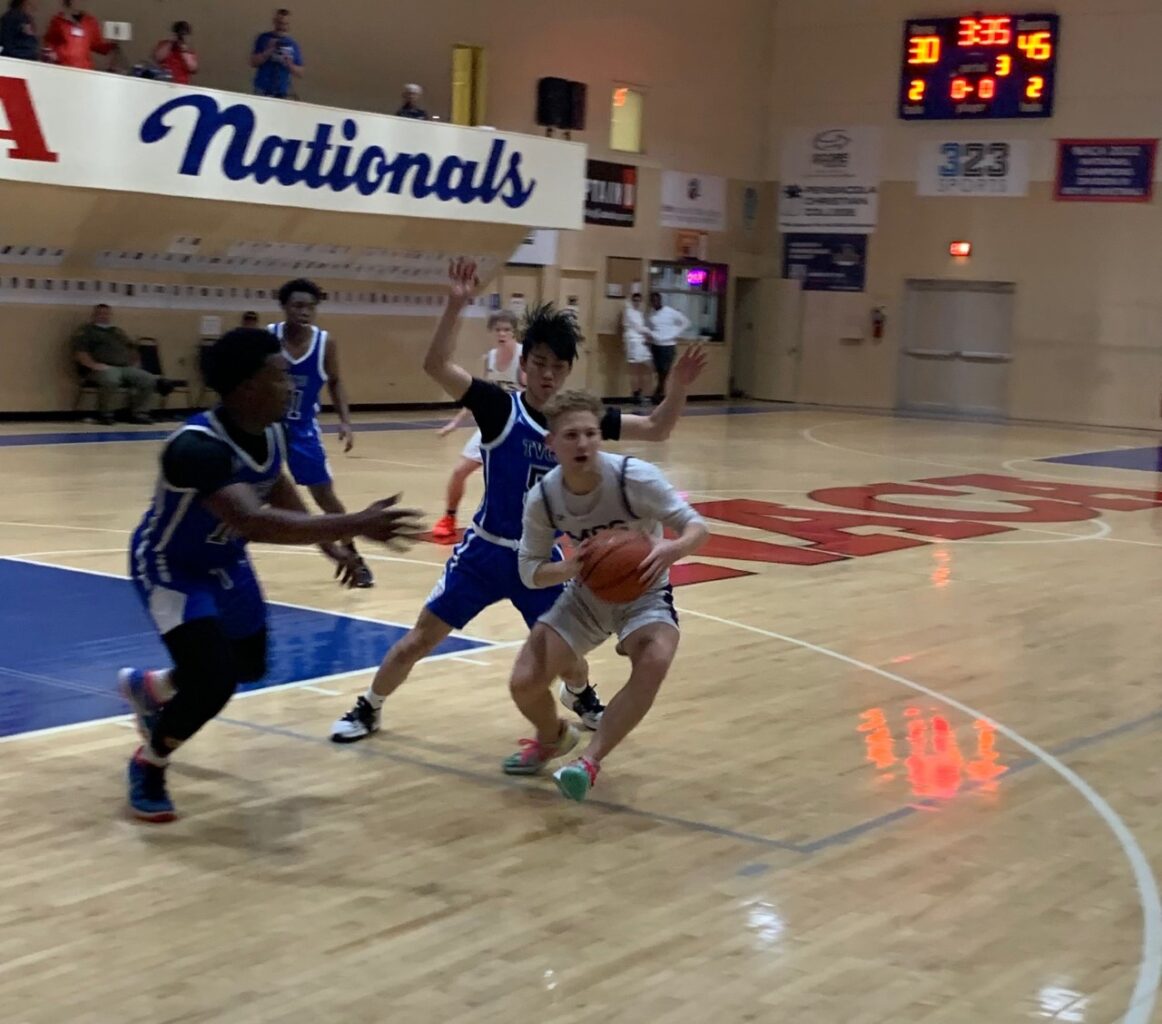 Hudson made a layup to give Maryville Christian an 18-15 lead with 15 seconds left, but Davis nailed a three at the buzzer to tie the game at 18-18 after the first quarter.

“We alright, we alright,” exclaimed Davis as the teams went to the bench. Indeed, the Lions would be alright, and that would soon be brought to light early in the second quarter.

Teays Valley would embark on a 16-0 run to open the quarter, taking a commanding 34-18 lead with just under four minutes left in the first half.

“Teays Valley didn’t really switch anything up, we just kind of went away from what was working,” Turbyfill said. “In the first quarter we did a good job of attacking the zone and attacking the gaps and then kicking out and knocking down shots. We kind of went away from that and we started holding the basketball and got a little stagnant, so that’s where it started to take a turn for us.”

English would hit a layup to make the score 34-23 with just over two minutes left in the second quarter. Maryville Christian looked to trim the lead to single digits late in the half, but a turnover by Hudson would give the ball back to Teays Valley.

Davis would hit 1-of-2 free throws with 52 seconds left, but neither team would score again in the half, as the Eagles went to halftime trailing 35-23, but closed the half with a 5-1 run.

Deacon Moles hit a foul line jumper to put Teays Valley ahead 41-28, but Jamey Wright would grab a steal and go for a fast break layup to make the score 41-30 with 4:45 left in the third quarter.

Two consecutive layups by Maryville Christian would cut the Eagles’ deficit to 50-37, but the Eagles trailed 53-37 after three quarters. 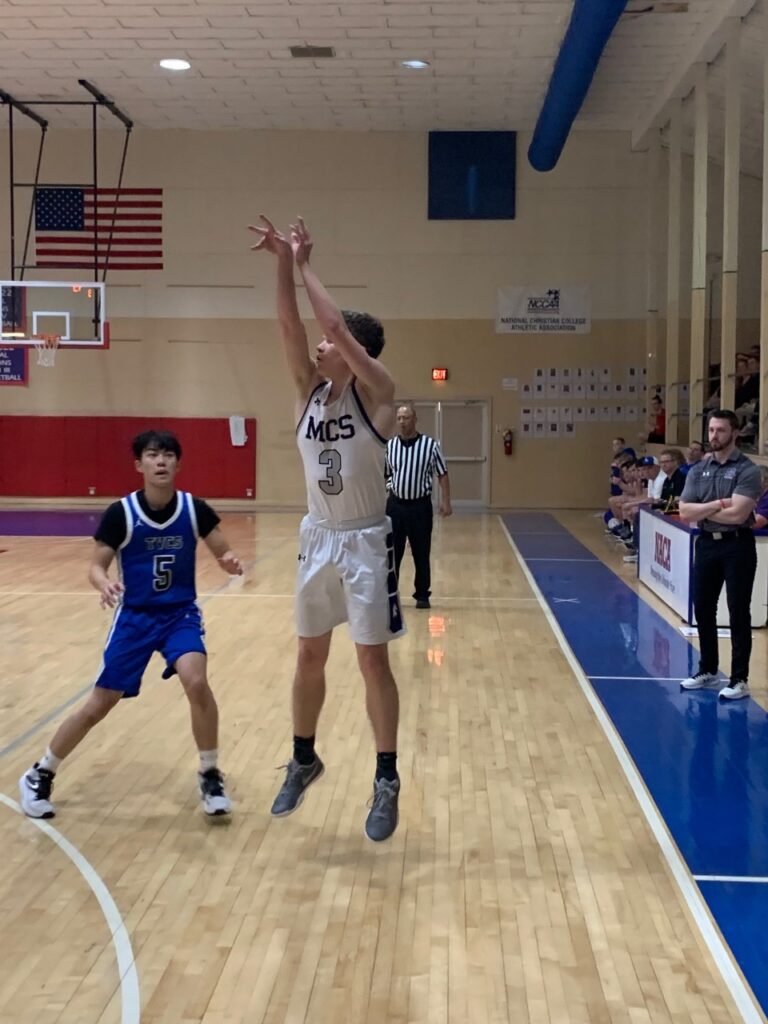 Maryville Christian’s Jamey Wright (3) goes up for a three, while Teays Valley’s Kris Lin (5) defends. The senior guard scored a game high 17 points for the Eagles. Photo by Brian Hamilton

Teays Valley would take a 56-37 lead early in the fourth quarter, as it looked like the Lions were ready to pull away.

An English layup, followed by a conventional 3-point play would make the score 56-42. Drew Napier then hit a basket to cap a 7-0 run and force Teays Valley to call a timeout, as their lead was slashed to just 12 points.

Fu would answer with a layup to give Teays Valley a 60-50 lead with just over four minutes remaining, followed by a conventional 3-point play by Davis, as the Lions led 63-50 with 3:43 left.

The Eagles then went on a 7-0 run to cut the deficit to 63-57 with just under three minutes remaining in the game.

A three by Napier would make the score 64-60 with 2:10 left, but three free throws by Davis would expand the Lions’ lead to 67-61 with just over one minute remaining.

On the next Teays Valley possession, Davis threw down a monstrous dunk off the backboard that sent the crowd into a frenzy and put the Lions ahead 69-61 with less than a minute left.

Maryville Christian came up short on the comeback attempt, falling 73-65, but Turbyfill lauded his team’s effort and fight down the stretch.

“We’ve been through so many ups and downs as a group,” Turbyfill said. “We played an extremely tough schedule, so we’ve faced some really good teams and found ourselves in those holes before and multiple times this year, they have found a way to fight all the way back and unfortunately we just came up a little short today.” 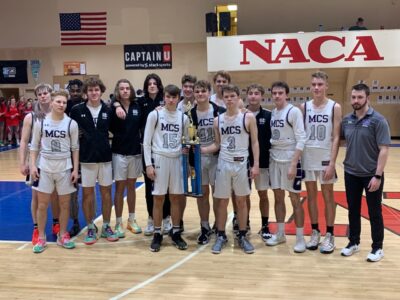 The Eagles had very balanced scoring across the board, as Jamey Wright finished with a team high 17 points, with 12 coming in the second half. Ryan English finished with 15 points, while Ryan Hudson added 14. Drew Napier was also in double figures with 12.

“It’s hard to put into words how much they mean to me,” Turbyfill said tearfully. “They were sophomores (when Turbyfill took over as head coach) and I had them on my JV team. It’s hard to put into words what they mean to me. They’re great young men. They handle business in the classroom, they’re respectful and they do everything you ask them to do. They bought in and trusted in myself and Coach Foster. I’m going to miss them. They’re great kids.”