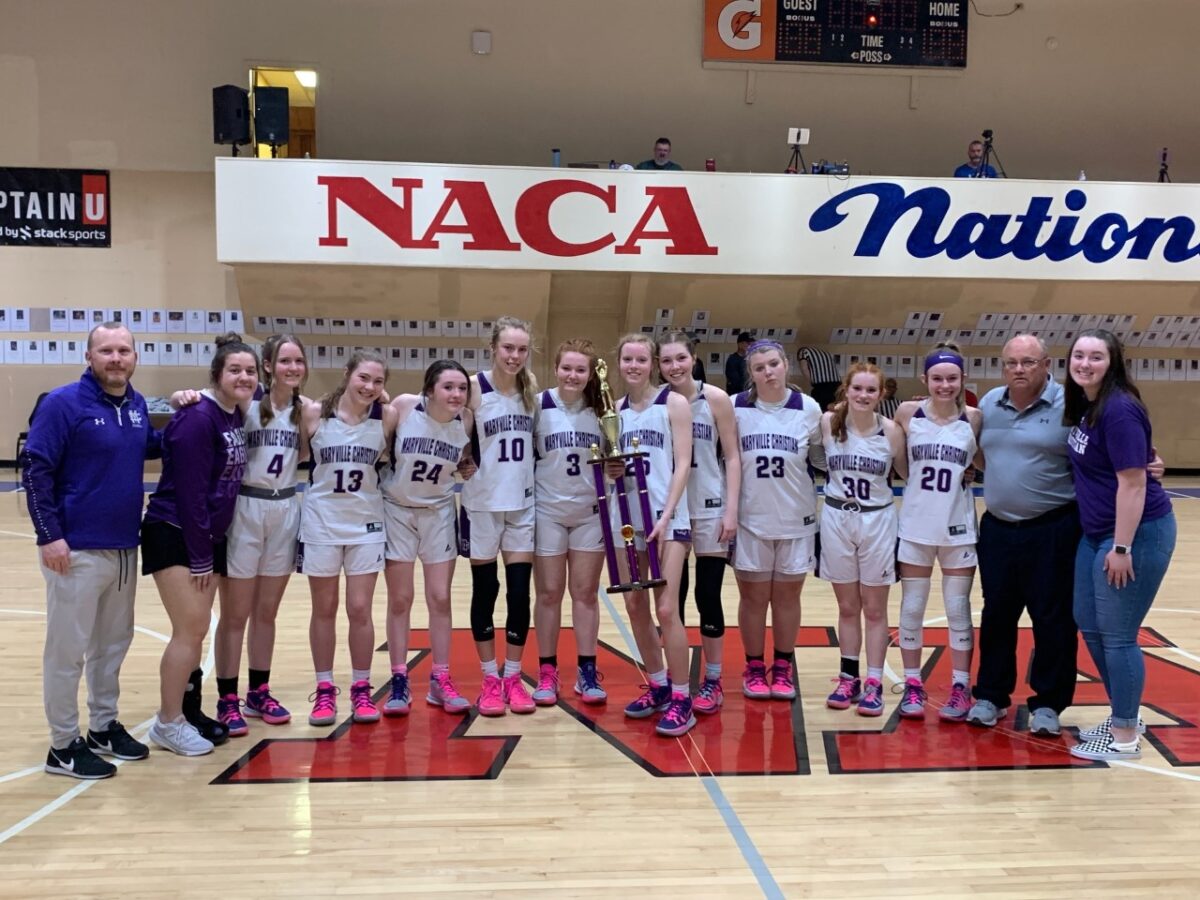 DAYTON – Maryville Christian got off to a good start and led Mountain Mission (VA) 24-20 in the NACA Division 4 championship game on Friday afternoon, but a 12-0 run to open the second quarter by the Lady Commanders forced the Lady Eagles to fight from behind most of the second half. Maryville Christian managed to force overtime and nearly win in regulation, but Mountain Mission was on a mission and ended the game on a 10-0 run to win 62-52 in overtime. 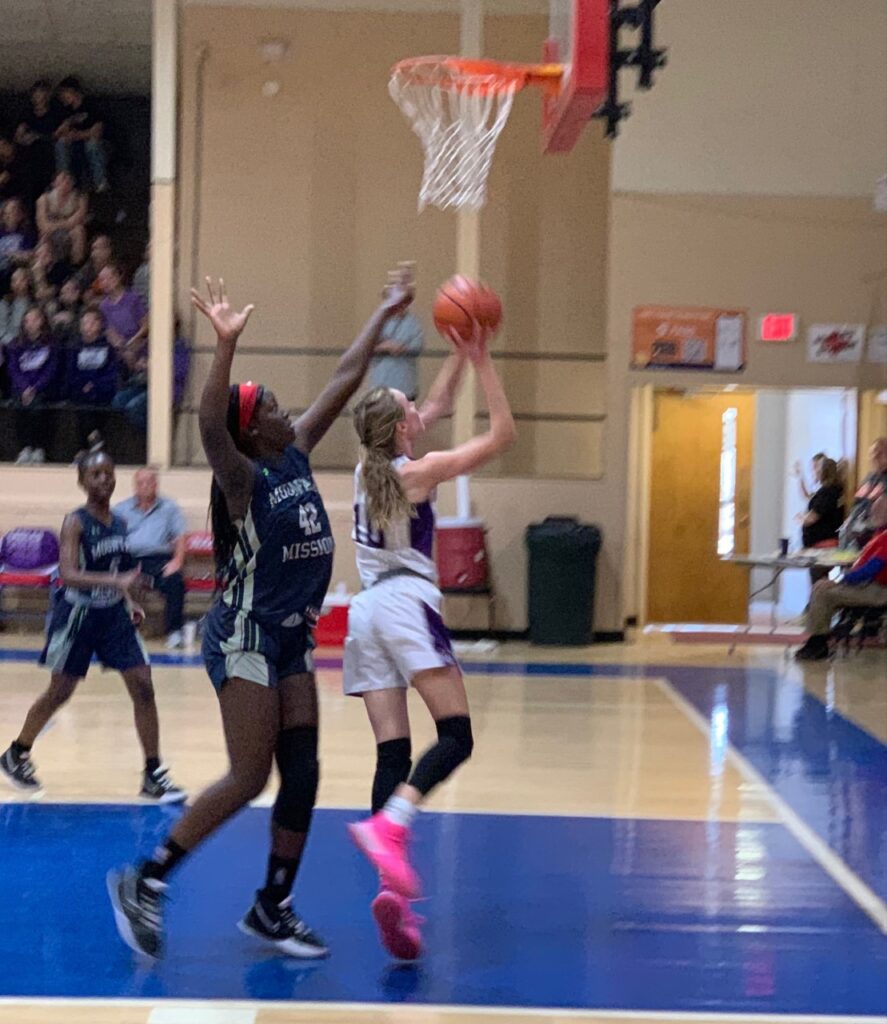 Haley Brown (10) goes up for a layup over Mountain Mission’s Anna Chacha (42) during the Lady Eagles’ 62-52 loss in the NACA championship game. Photo by Brian Hamilton

“They’re a very athletic team and they jump in lanes well,” Maryville Christian coach Stephen Hudson said of Mountain Mission. “We had some soft passes that they did jump, but we started applying our own pressure full-court, they kind of crumbled as well. Usually teams that press you, don’t like to be pressed themselves and we kind of figured that out a little bit and that helped us a little bit, but the turnovers, that was something that we wanted to focus on all year, and it bit us in the butt today.”

Mountain Mission’s Anna Chacha scored the opening basket of the game with 6:24 left in the first quarter, putting the Lady Challengers ahead 2-0. Jesse Cooper would hit a three from the left corner with 5:12 left to give Maryville Christian a 3-2 lead.

Chacha scored immediately on the other end to put Mountain Mission back in front 4-3. On the next trip down, Chacha was sent to the line for two free throws and made 1-of-2 for a 5-3 lead.

Naomi Atchley tied the game when she went right at Chacha and scored over the six-footer for a game typing layup with 3:45 left in the first.

Haley Brown was fouled on a layup on the Lady Eagles’ next possession, but missed the foul shot, leaving Mountain Mission with a 10-7 advantage.

A second 3-pointer by Cooper would tie the game at 10-10 late in the first quarter. Brown would find Atchley underneath for an assist to put Maryville Christian in front 12-10 with less than 10 seconds remaining in the first, as the Lady Eagles would take a 12-10 lead into the second quarter.

Juliana Chacha would score immediately coming out of the break, tying the game at 12-12 with a layup. Another basket by Juliana would give the Lady Commanders a 14-12 lead early in the second quarter. 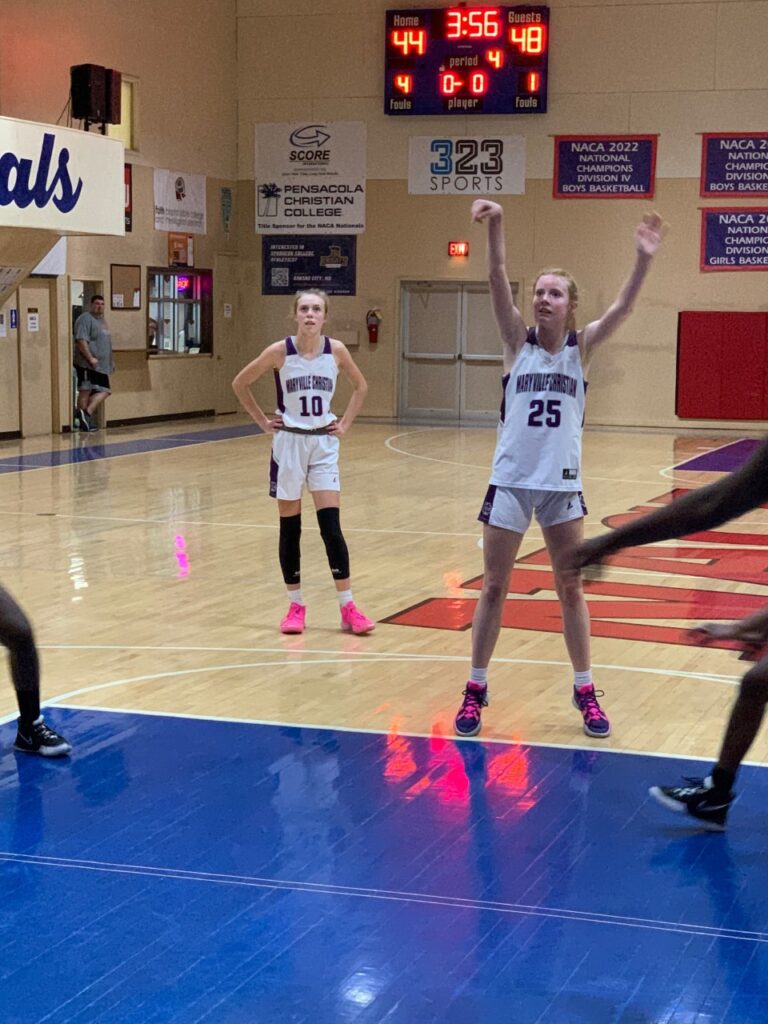 Anna Chacha grabbed a rebound and putback and stretched the Mountain Mission lead to 16-12 on the next possession. Atchley made a scooping layup to make the score 16-14, followed by a steal and layup by Maya Barnhill to tie the game at 16-16 with just under four minutes remaining.

A steal and layup by Juliana Chacha put the Lady Challengers back in front 18-16, but Brown would answer with a layup to tie the game at 18-18 with 2:12 remaining in the second quarter.

Maria Chacha hit a layup to put Mount Mission back in front 20-18 with 1:32 left in the half, but Atchley rebounded a Brown miss and was fouled on the shot. Atchley converted the 3-point play to give the Lady Eagles a 21-20 lead with just over one minute remaining until halftime.

Anna Chacha had a shot go in and out, which was rebounded by the Lady Challengers, who then traveled, turning the ball over with 12 seconds left before the half.

Kaybrie Patterson hit a long 3-pointer as time expired, giving Maryville Christian a 24-20 lead at intermission, its largest lead of the game.

Mountain Mission would come out and go on a 12-0 run, fueled by six consecutive Anna Chacha points to start the third quarter for a 32-24 lead.

“The 12-0 run punched us in the gut,” Hudson said. “I kind of questioned myself whether I should have called a timeout a little sooner than what I did, but there’s moments where we’ve fought through tougher (circumstances). I don’t think they adjusted anything or did anything different. I think we just didn’t communicate on defense well enough, and we got a little flustered on offense.”

Atchley would then make back-to-back baskets to cut the Lady Challengers’ lead to 32-28 with just over three minutes left in the third quarter.

Sara Chacha would grab a steal and hit a layup with 47 seconds left in the third quarter and that’s how the game would stand after three quarters, with Mountain Mission leading 38-33. 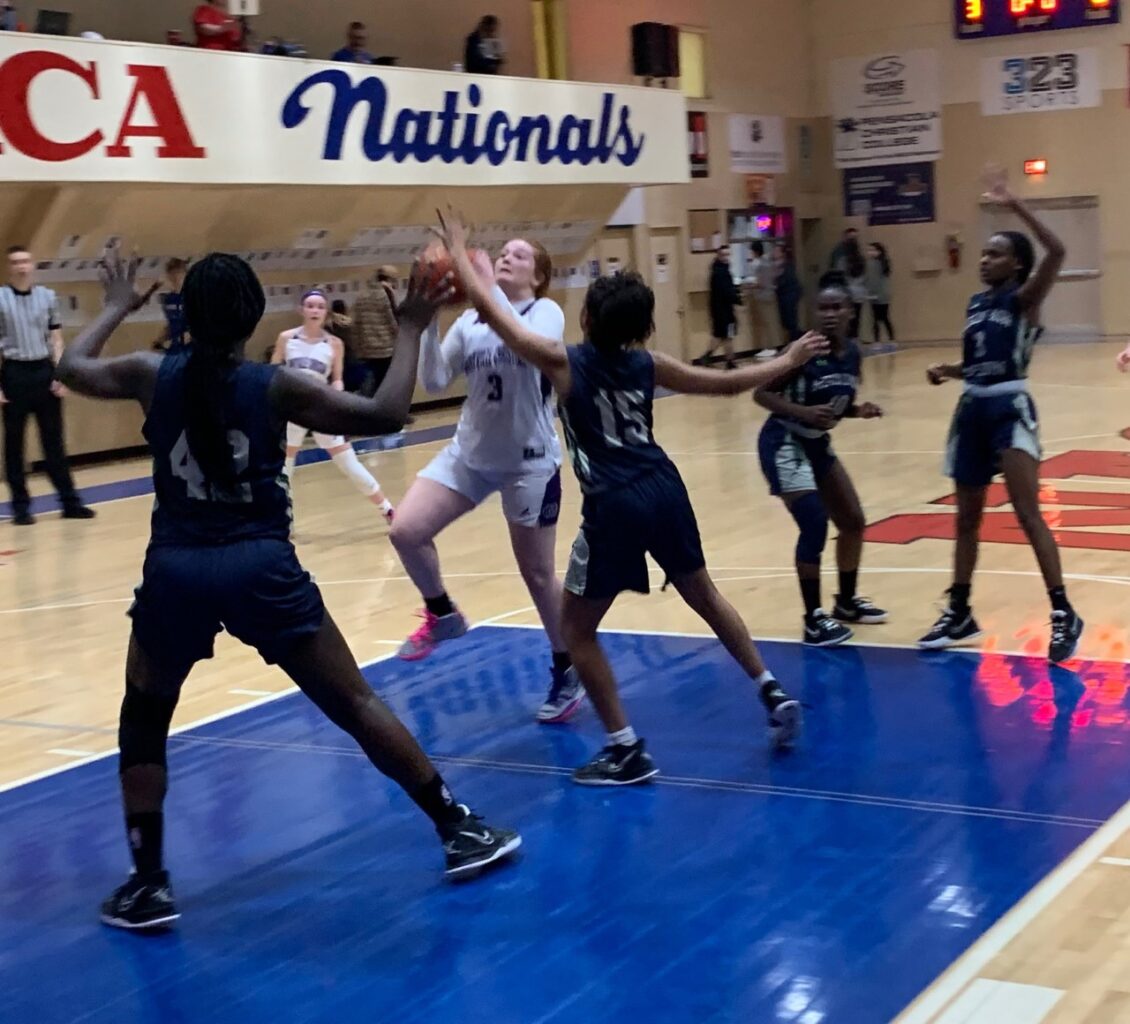 Maryville Christian’s Jesse Cooper (3) drives the lane for a layup against the Lady Commander defense. Photo by Brian Hamilton

Cooper hit a driving layup to make the score 38-35 early in the fourth quarter, but Anna Chacha nailed a long 2-pointer to push the lead back to 40-35.

Brown would miss a layup on the next Lady Eagles possession, but grabbed two of her own rebounds and scored, as the senior would not be denied the basket, cutting Maryville Christian’s deficit to 40-37. Cooper would tie the game at 40-40 with a three with 6:22 left.

The Lady Commanders then scored four consecutive points to take a 44-40 lead on a layup by Anna Chacha, but two consecutive baskets by Patterson tied the game at 44-44.

Anna Chacha would answer with a bucket on the other end, followed by two Mountain Mission free throws to make the score 48-44 with 4:18 left in the game.

Brown later fouled out in her final game for the Lady Eagles with just over three minutes to go and trailing 48-44. Brown and Hudson embraced on the sideline, as the senior and Bryan College soccer signee became emotional that she was unable to finish her last game.

“That young lady, obviously, she’s a soccer star and basketball is her second sport,” Hudson said. “She gives everything she has. She may not be the most skilled shooter or ballhandler, but she is the best defender I’ve ever coached. What I talked about with her was thanking her for everything she’s done for me and the program. Everything I’ve asked her to do, she’s done, without question.”

Cooper hit a three to cut the Maryville Christian deficit to 48-47 with 2:51 remaining, but two Anna Chacha free throws would stretch the Mountain Mission lead back to 50-47 with 1:40 left.

Anna Chacha scored another basket inside for a 52-49 Lady Commanders lead with 36 seconds left. 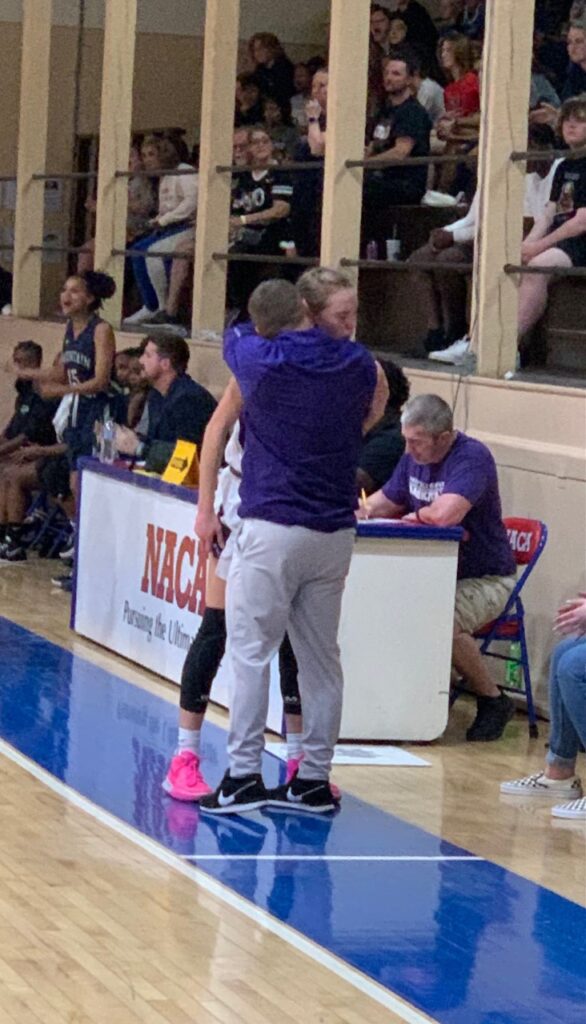 Haley Brown and Maryville Christian coach Stephen Hudson embrace after the senior fouled out during the fourth quarter of her final high school game, ending her career. Photo by Brian Hamilton

Cooper hit a 3-pointer with 14 seconds left on the clock and Mattie Hammonds would steal the ball at halfcourt and take a shot at the game winner from near the free throw line. The shot clanged off the back rim and off, as Anna Chacha pulled down the rebound and the game went to overtime at 52-52.

“I was all out of timeouts,” Hudson said. “I want to say there was probably seven seconds when she put the ball up and she had, at least, somewhat of a lane to get to the hoop. She just got a little antsy and popped it up. If she makes it, I’m a genius. Obviously, the emotions got to (Mountain Mission) when we hit that three. They were probably a little flustered as well and that’s probably why we got that steal. Our pressure is not meant to get steals; it’s to make people work and slow people down usually. When we got it, yeah, I wish we would have drove to the lane a little further, but that’s okay. I mean, she got a good shot off either way. She’s a good shooter, it just didn’t go in and we had a lot of good shots today, we just didn’t have many fall.”

Overtime did not go well for the Lady Eagles, as Anna Chacha immediately scored on a layup to make the score 54-52. Another Mountain Mission layup would push the lead to 56-52 with 2:40 left in the extra period.

“We never faced a presence like (Anna Chacha this season),” Hudson said. “She’s a good ball player; she has good footwork; she has good touch; she shoots the free throw ball very well. We have to adjust and they just had the better team today.”

A pair of free throws gave the Lady Commanders a 58-52 lead with just under two minutes left in overtime and Mountain Mission cruised to a 62-52 victory, shutting out Maryville Christian 10-0 in overtime.

Naomi Atchley fouled out in the final minute of overtime but managed to lead the Lady Eagles with 22 points, while Jesse Cooper finished with 17. Haley Brown had eight points before fouling out in the fourth quarter.