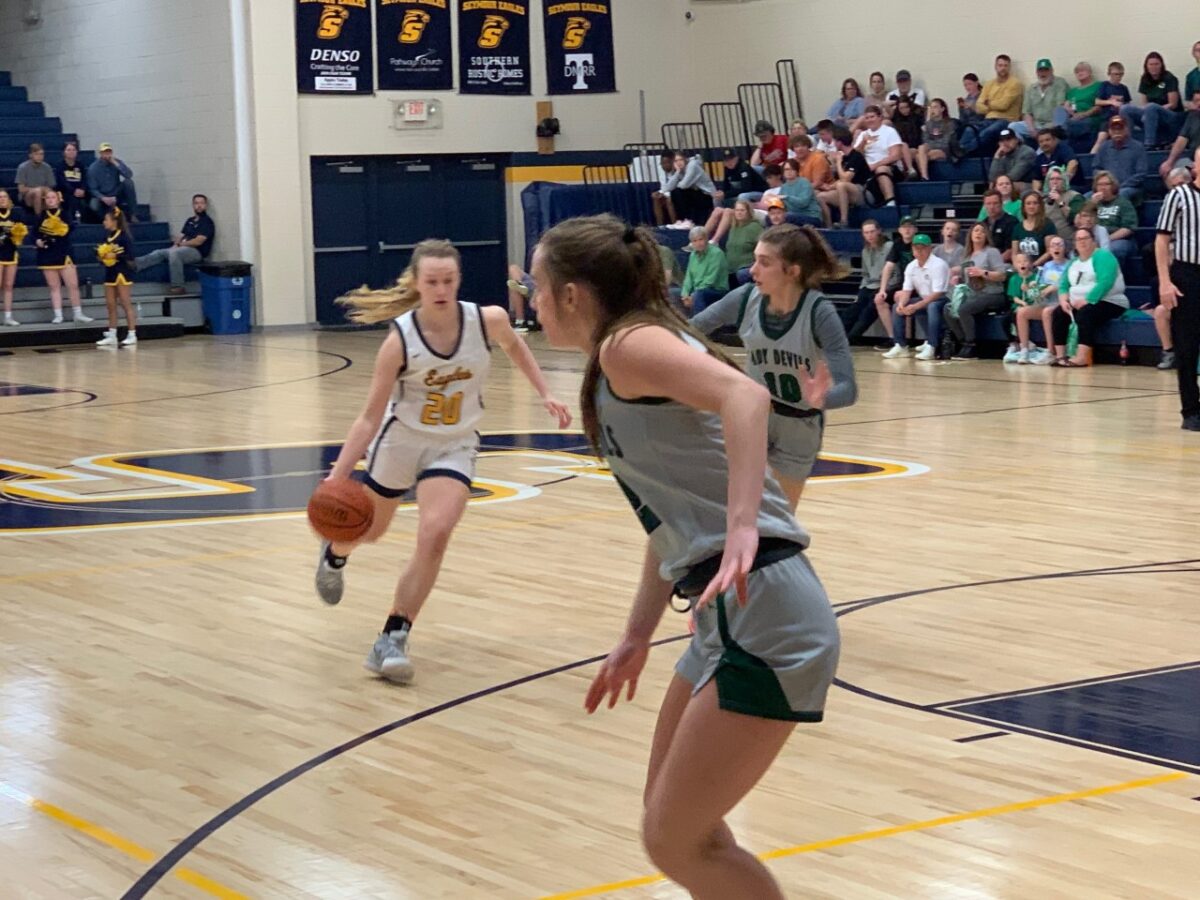 SEYMOUR – Greeneville used a stifling press to fluster Seymour early in the first quarter, as the Lady Devils took a 20-point first quarter lead. Seymour played better from that point forward, but the damage was done, and the Lady Eagles never were able to get the deficit back to single digits, falling 64-44 in the substate sectional game.

“I’m not going to make any excuses,” Seymour coach Greg Hernandez said. “It’s been a special year. These kids have given so much, and I can’t fault them for their effort through everything they’ve given us this season. Without them, we’re not in this situation, and I mean that.” 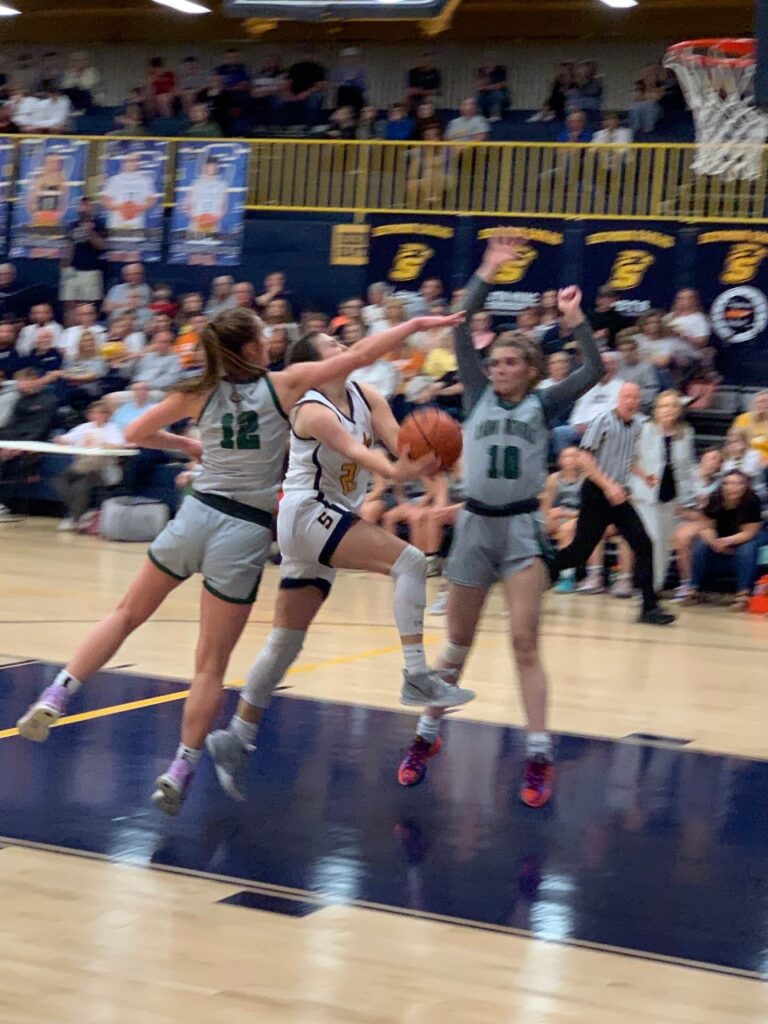 Seymour’s Brielle Turner (22) goes up for a layup during the Lady Eagles’ 64-44 substate sectional loss on Saturday. Turner led Seymour with 12 points. Photo by Brian Hamilton

Greeneville took an early 4-0 lead on two Lauren Bailey layups, but Emma Watson would grab a rebound and put it back up to make the score 4-2 less than one minute into the game.

The Lady Devils led 7-2 when Brielle Turner hit a three to cut the Lady Eagles deficit to 7-5.

Greeneville would go on a 17-1 from that point to take a commanding 24-6 lead with just under three minutes left in the first quarter, as the Lady Devils press forced Seymour into 11 first quarter turnovers.

“I knew that they had the ability to speed us up and that’s what they did,” Hernandez said. “I was worried about it. We only had one day to prepare for it. Wednesday night was so emotional that I didn’t want to kill them (at practice) Thursday and kill them yesterday. I knew that the magic number was going to be 15 (turnovers) for the game and that many in the first quarter…we just put ourselves too far behind the eight ball.”

Turner finally ended the run with a pair of free throws to make the score 24-8 with 2:27 remaining. Delana Debusk answered with a 3-pointer to stretch the Lady Devils’ lead to 27-8 with 1:25 to go in the first.

Seymour’s Kaylyn Jarvis was fouled with 19 seconds left in the period and made 1-of-2 free throws, but Debusk answered on the other end, hitting a midrange jumper with three seconds left, giving Greeneville a 29-9 lead at the end of the first quarter.

“I wish it was like back when I was 10 or 12 years old, when I used to play video games and I could just hit restart,” Hernandez said of the first quarter.

Tambryn Ellenburg hit a three early in the second quarter to put the Lady Devils ahead 32-10, but Turner answered with a layup and 3-point play, cutting the Lady Eagles’ deficit to 32-13 with 6:07 left in the half.

Turner hit a pair of free throws to make the score 34-17 with 3:50 left, but Greeneville would push the lead back to 40-18 when Kaylee Crumbley made a spinning layup with just over one minute left before halftime. 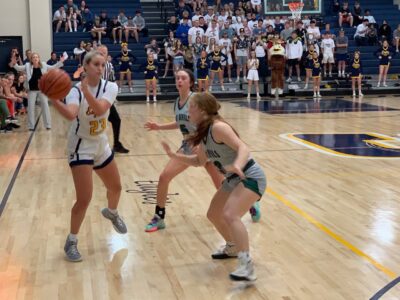 Caiden Russell hit a three to pull Seymour to within 40-21 with 43 seconds left in the half. The Lady Eagles would add a free throw, but Russell missed a buzzer-beating three, as Seymour went to halftime trailing 40-22.

Bailey McCoy opened the third quarter with a layup to trim the Greeneville lead to 40-24, but Lauren Bailey answered on the other end with a rebound and layup for a 42-24 lead.

Watson made a layup, followed by a three, cutting the Seymour deficit to 13 (42-29), as the Lady Eagles began to chip away at the 22-point deficit.

Chloe Marsh hit two free throws to end the Seymour run and give the Lady Devils a 44-29 lead with just under four minutes left in the third quarter.

McCoy hit a basket to make the score 44-31, but Marsh would hit a layup to put Greeneville ahead 46-31 with just under one minute remaining in the third. The Lady Devils would take a 46-33 lead into the fourth period, as Seymour was unable to get a shot off at the end of the third.

Greeneville went ahead 49-33 early in the fourth quarter, but Caiden Russell and Brielle Turner hit a pair of free throws apiece, making the score 49-37.

The Lady Devils would hit foul shots and salt away the game, winning 64-44, as the Lady Eagles were never able to get the game to single digits again after the early onslaught. 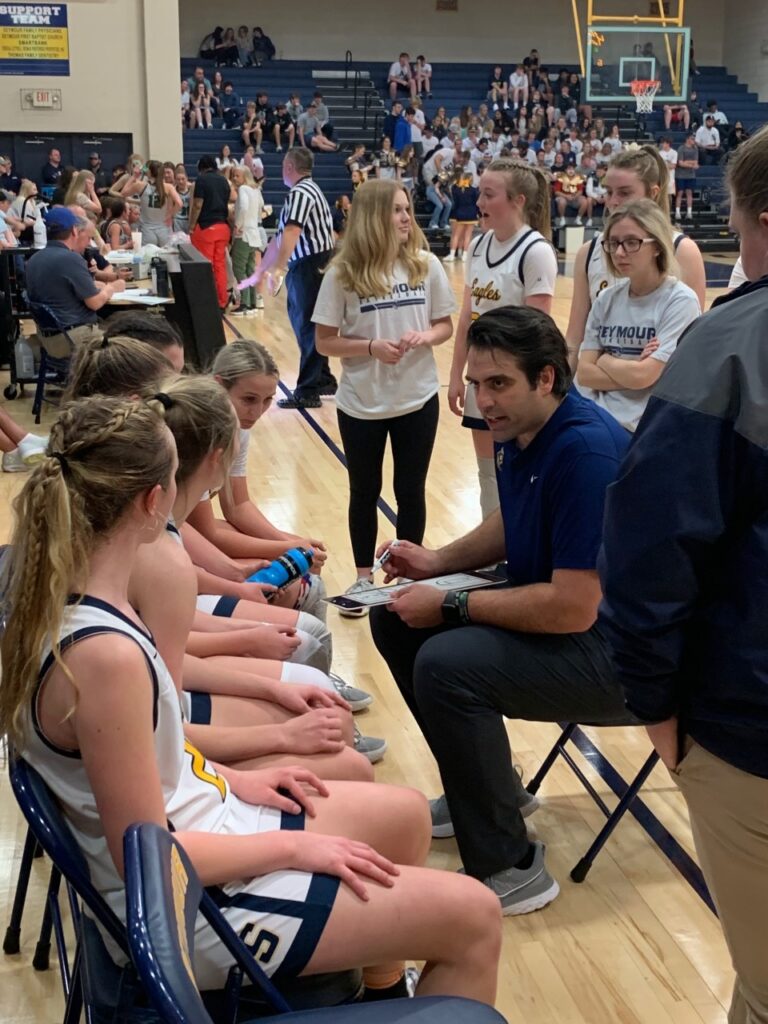 “I told them, there, at the end, ‘Girls you have no idea what you’ve done to revitalize everything that’s going on right now,'” said Hernandez. “I said, ‘Nobody has cared about Seymour girls’ basketball for the last 15 years and to be 32 minutes away from the state tournament with a packed house in our own gym; that’s what I want you to take from this.’ We’re going to work to make sure we put ourselves in this position next year.”

Seymour was led by Brielle Turner’s 12 points, while Emma Watson finished with 10 in her final game as a Lady Eagle. Jaden Cummings and Caiden Russell each finished with seven points apiece, while District MVP Bailey McCoy was held to just six.

The loss ends Seymour’s season with a record of 29-6, while Greeneville (27-8) advances to its first Elite 8 in history. The Lady Devils will face Jackson South Side on Tuesday at 6 p.m. at the Murphy Center at MTSU.