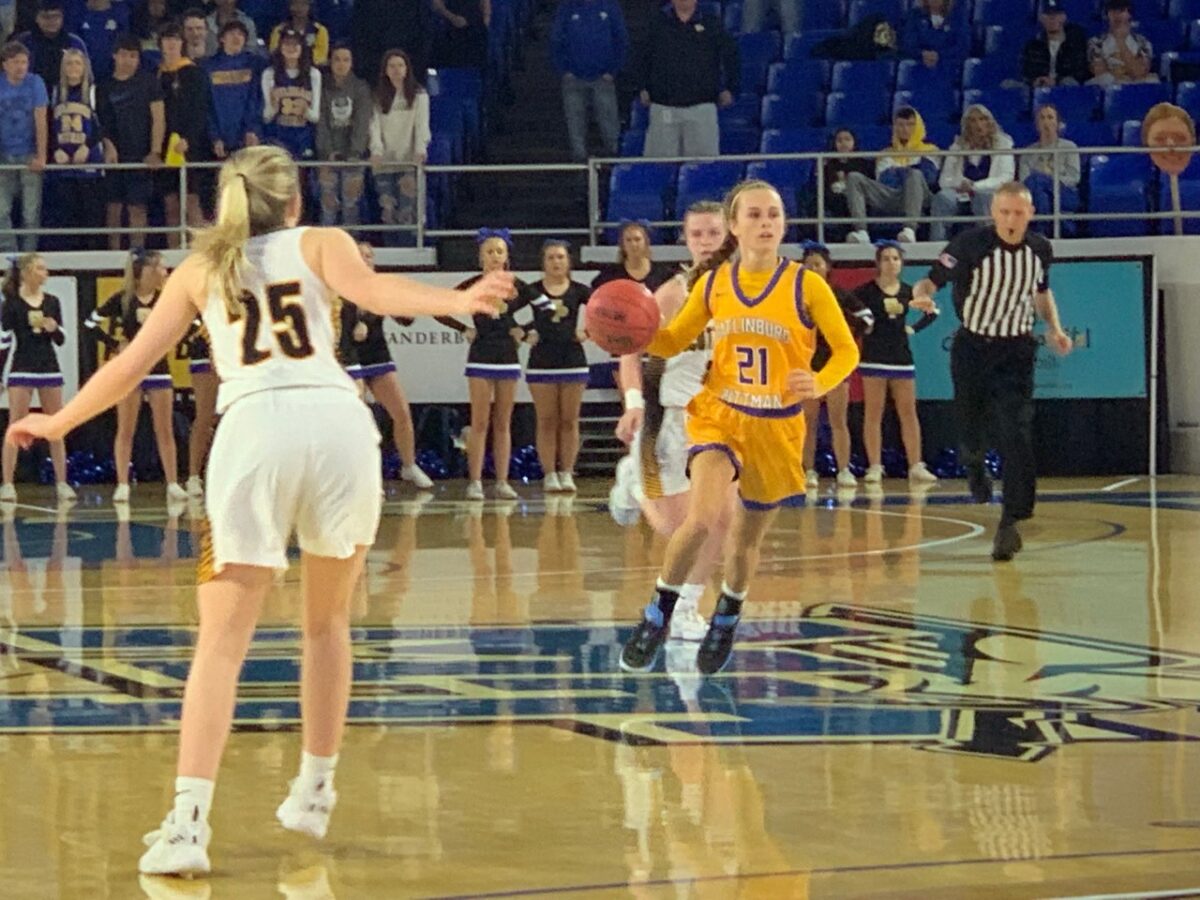 MURFREESBORO – Gatlinburg-Pittman was slated with an early tip-off at 10 a.m. for their Elite 8 matchup with Scotts Hill, but the early tip didn’t affect the Lady Highlanders, as they never trailed, going on to a 68-32 win. 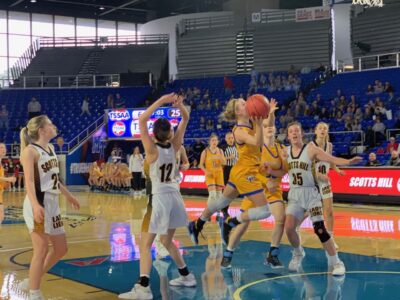 Gatlinburg-Pittman senior Lily Stinnett goes up for a layup during the Lady Highlanders’68-32 Elite 8 win over Scotts Hill on Tuesday. Photo by Brian Hamilton

“I think the biggest thing we saw on film, was that no one we saw them against really pressured the basketball very well,” Gatlinburg-Pittman coach Katie Moore said. “I think that was something that helped us tremendously. I don’t think they ever got into an offensive flow, just because we were changing defenses and they couldn’t handle our ball pressure, which I think led to some transition points for Maddy and then you could tell they were both trying to stop Maddy and that opened up Leah and Lily on the perimeter.”

The win sends the Lady Highlanders to their second Final Four in school history. Katie Moore guided Gatlinburg-Pittman to the state semifinals in 2017, where they lost to Pearl Cohn 63-56.

“I mentioned it at halftime,” Moore said after the game. “I told them that they would be the second team ever that made it this far, but I don’t necessarily think it’s really sunk in yet.”

Gatlinburg-Pittman jumped out on the Lady Lions early, as Maddy Newman made a layup, followed by baskets by Leah Stinnett and Lily Stinnett for an early 6-0 lead.

“When my first shot went in, I felt like this was going to be a good game,” Sophomore guard Leah Stinnett said after the game.

Scotts Hill got on the board when Julie Hampton hit a jumper to make the score 6-2 with 4:44 left in the first quarter.

A basket by Leah Stinnett, followed by a layup by Maddy Newman would stretch the Lady Highlander lead to 10-2 with 3:13 remaining in the first.

Hampton made her second basket of the game to cut the Gatlinburg-Pittman lead to 10-4, but the Lady Lions watched the lead swell to 21-4 by the 1:30 mark, as the Lady Highlanders were in the midst of an 11-0 run. 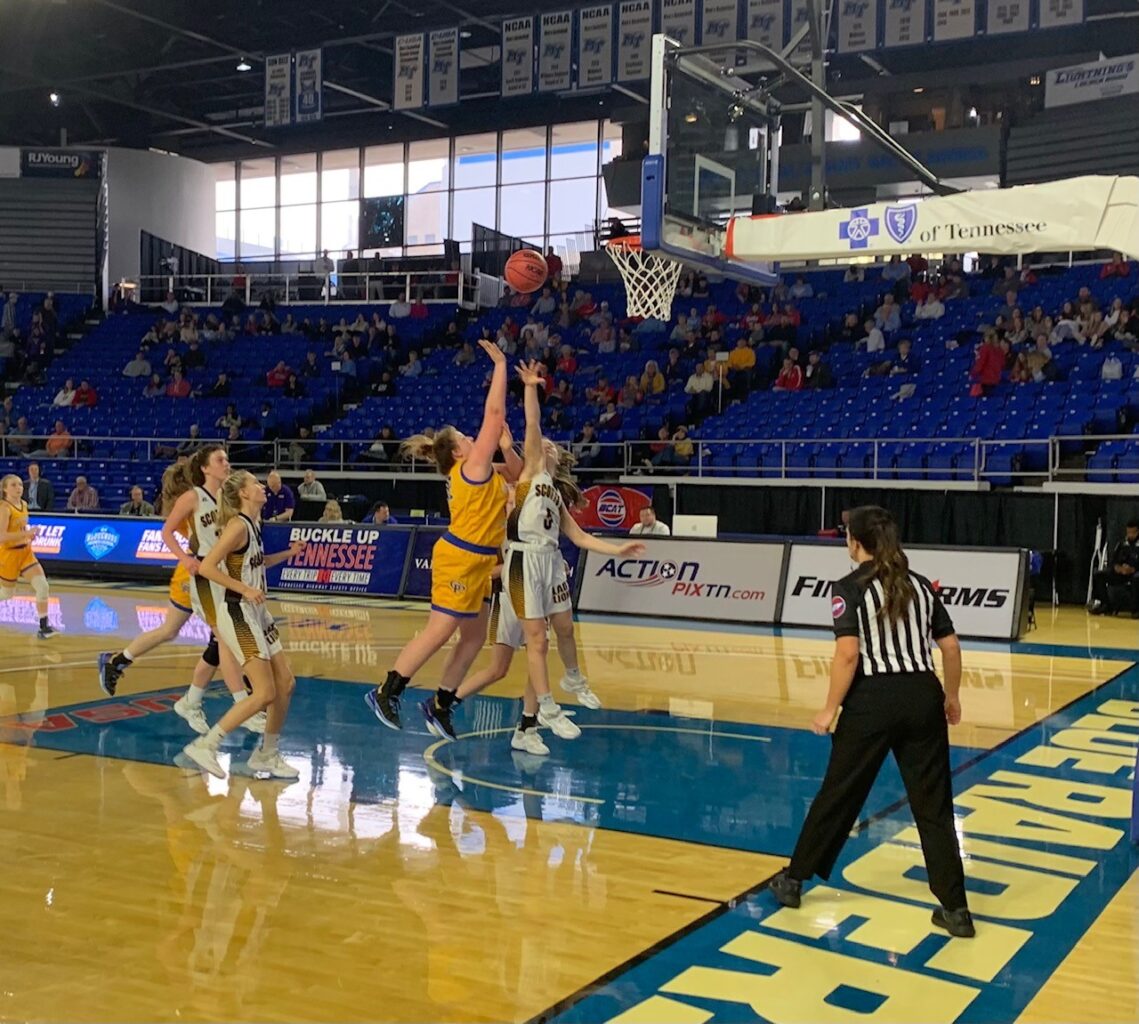 Gatlinburg-Pittman’s Shilah Whaley (42) goes up for a layup over the Lady Lions’ defense. Photo by Brian Hamilton

Sevier County transfer Shilah Whaley came off the bench during the 11-0 spurt and made an immediate impact, hitting a layup and then nailing a 3-pointer.

“We’ve always known that Shilah can shoot pretty well, and I think that a lot of people kind of sag off of that position on our team, because they have to double down on Maddy,” Moore said. “Shilah’s just been shooting really well.”

Heather Bartholemew made a layup to end the drought for Scotts Hill with 39 seconds left in the first quarter, making the score 21-6.

Leah Stinnett drove to the hoop for a layup as the first quarter horn sounded, giving Gatlinburg-Pittman a 23-6 lead after one period.

“I honestly don’t think I’ve ever coached a kid that just has a knack for that, because she’s just hit so many (buzzer beaters) that it’s unbelievable,” Moore said. “It’s not like we practice them, but we’re always just like, ‘Give it to Leah.'”

Maddy Newman opened the second quarter by making two free throws to extend the Lady Highlanders’ lead to 25-6. A layup by Lily Stinnett made the score 27-6, as Gatlinburg-Pittman found itself on a 6-0 mini-run, dating back to the first quarter.

A layup by Lacie Dunavant would make the score 27-8, but the Lady Highlanders kept their foot on the gas, as a Shilah Whaley layup increased the lead to 34-10 with 3:48 left in the second quarter.

Newman scored two more layups late in the first half, as Gatlinburg-Pittman went to halftime with a 40-13 lead.

The Lady Highlanders scored 24 of their 40 points in the paint during the first half, as Scotts Hill could not stop Maddy Newman in the post, nor could they stop the guards from getting to the rim. Gatlinburg-Pittman also had 15 second change points during the half as well.

Molly McCarter hit a three to start the third quarter, as the Lady Highlander lead ballooned to 30 points (43-13). Batholomew made a layup to make the score 43-15, but Newman responded with two free throws to stretch the lead back to 30. 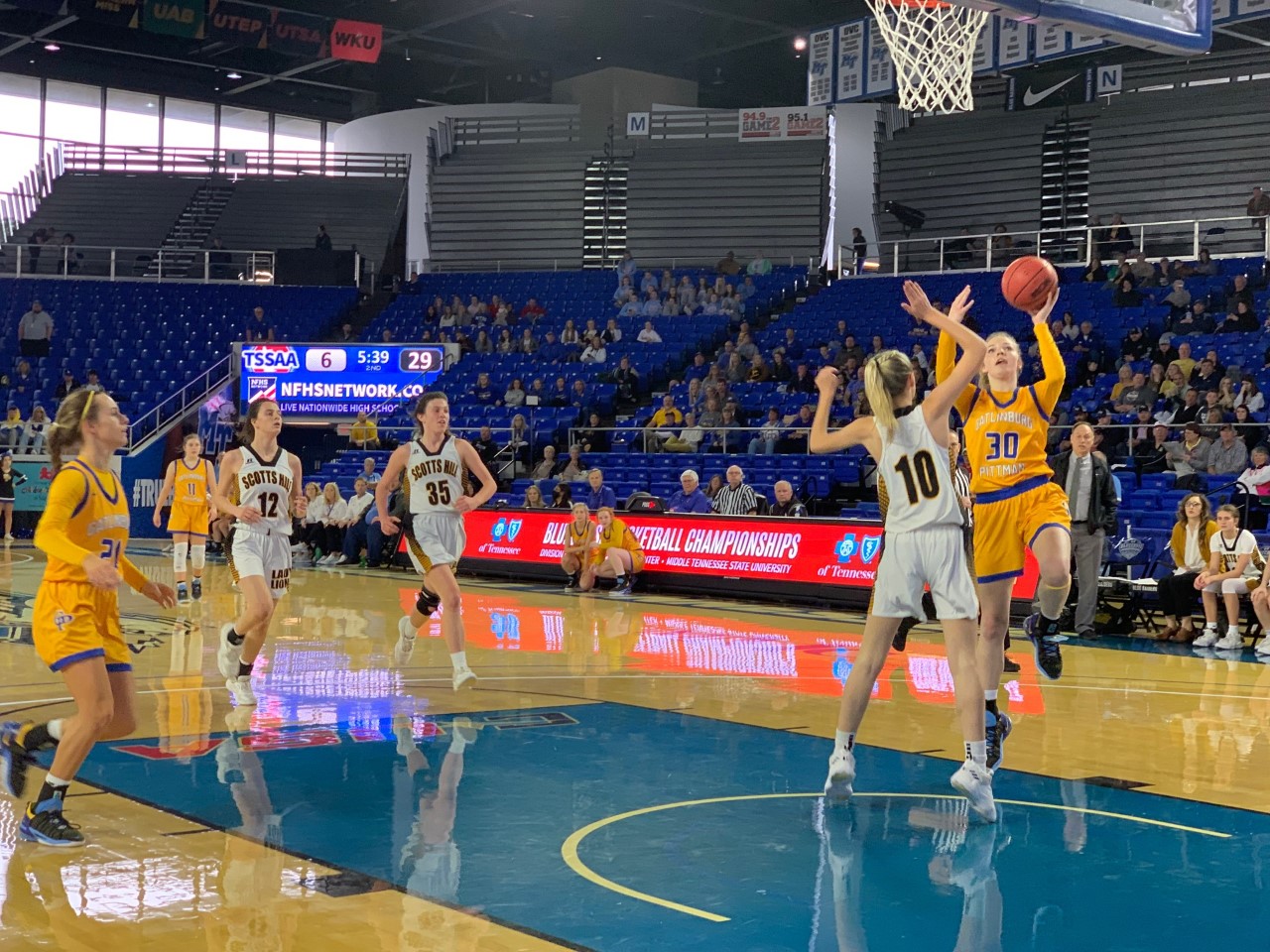 Maddy Newman (30) goes up for two of her 12 points, as Scotts Hill’s Kaylin Wade (10) defends. Photo by Brian Hamilton

Gatlinburg-Pittman kept the lead around 30 for most of the third quarter, but threes by Leah Stinnett and Kayle Yates would end the quarter on a 6-0 run and a 59-24 Lady Highlander lead.

A jumper by Leah Stinnett would make the score 61-24 early in the fourth quarter and a Lily Stinnett layup with 3:52 left put Gatlinburg-Pittman up by 40 (66-26).

There was a running clock for the entirety of the fourth quarter, so the last period went rather quickly, as Moore emptied her bench and gave the reserves an opportunity to get some valuable minutes on the big stage.

Scotts Hill would work the lead under 40 late in the fourth, as Deanna Pusser hit a three to cut the Lady Highlander lead to 67-35 with 2:21 left.

Kendra Yates hit 1-of-2 free throws with just over a minute remaining, as Gatlinburg-Pittman ran out the clock and went on to a 68-32 win and a berth in Thursday’s Final Four.

“I think it’s really exciting because we’ve only had an appearance in the Final Four once before this, so I think it’s cool that we’re kind of making a little bit of history,” Sophomore center Maddy Newman said after the game. 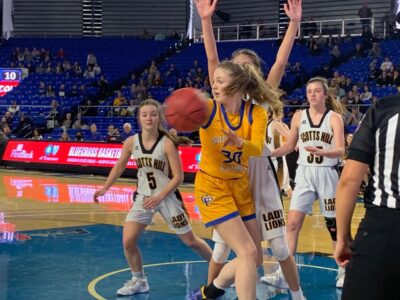 Leah Stinnett led all scorers with 20 points, while Maddy Newman and Shilah Whaley each finished with 12. Lily Stinnett and Kayle Yates also added eight points apiece for the Lady Highlanders.

Scotts Hill had no players in double figures, as Heather Bartholomew led the Lady Lions with nine and Lacie Dunavant finished with eight, while Julie Hampton added six.

The Lady Highlanders shot 43-percent from three and 46-percent from the field in the game, which Moore attributes to practicing in a college arena before making the trip to Murfreesboro on Monday night. She also had the team practice early in the morning to adjust to the 10 a.m. tip.

“We went to Thompson-Boling (Arena) and practiced for our shooting mostly,” Moore said. “We practiced yesterday morning to just try and get them going in the morning.”

The Lady Highlanders will shift to an evening matchup for their next contest, as Gatlinburg-Pittman (28-9) will face York Institute (25-6) in the state semifinals at 4:30 p.m. on Thursday at Murphy Arena. The Lady Dragons advanced to the semis with a 53-50 win over Gibson County on Tuesday.