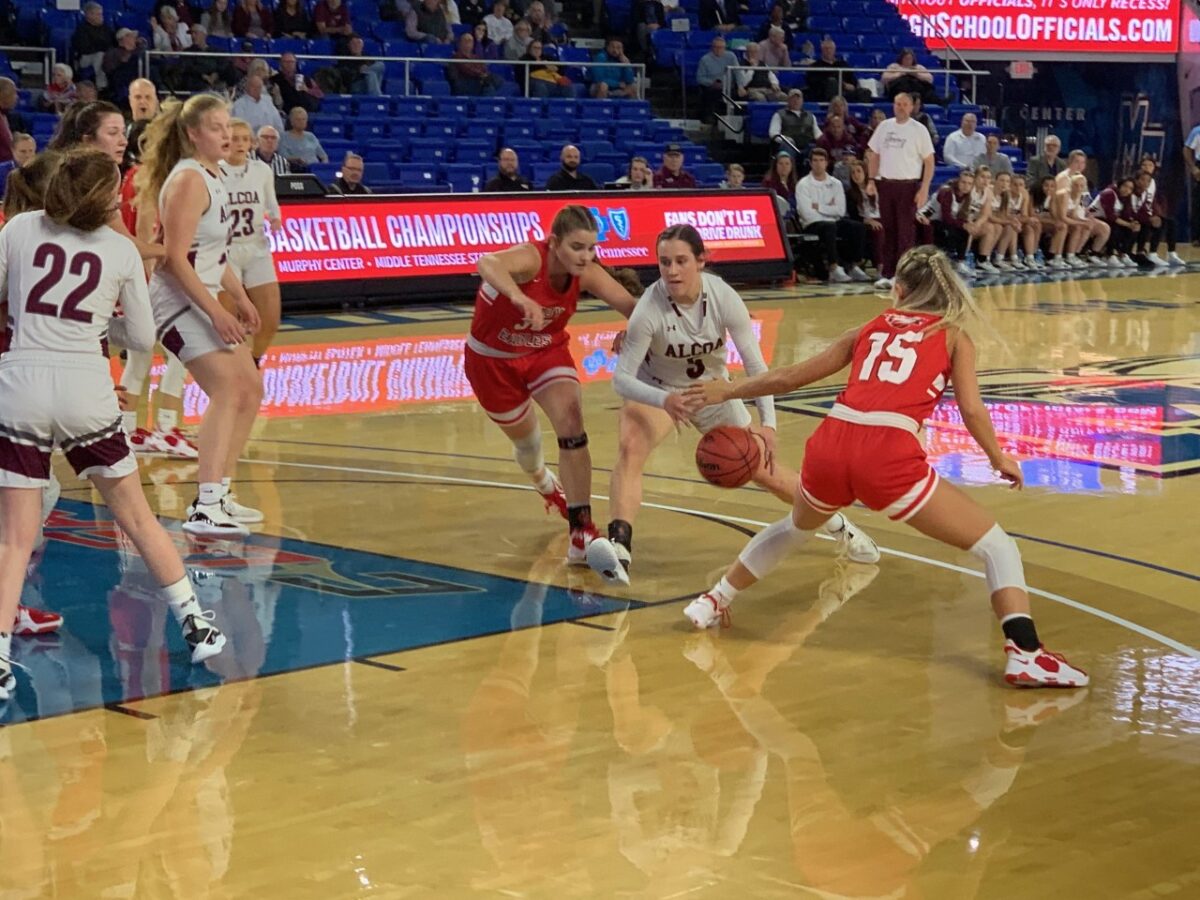 The Final Four berth will be Alcoa’s first since in 38 years, when the Lady Tornadoes made it to the championship before losing to York Institute 65-34 in 1984. 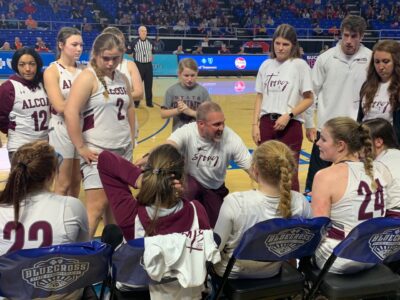 Alcoa coach David Baumann rallies his team during the fourth quarter of the Lady Tornadoes’ 47-38 Elite 8 win over Westmoreland. Photo by Brian Hamilton

“Dawn Marsh’s team back in 1983-84 made it to the championship game, so it’s been a minute,” Alcoa coach David Baumann said after the game.

It started a little shaky for the Lady Tornadoes, as Ansley Pfeiffer turned the ball over on Alcoa’s first possession and Westmoreland’s Mallory Cassetty went right down to the other end and scored on an easy layup for a 2-0 lead.

Eden Davis answered on the other end, however, followed by a layup by Amelia Pfeiffer to give the Lady Tornadoes a 4-2 advantage with 6:32 left in the first quarter.

A free throw by Amelia Pfeiffer, along with a layup by sister Ansley Pfeiffer put Alcoa up 7-2, as the Lady Tornadoes followed the Lady Eagles’ opening basket with a 7-0 run.

Bayleigh Norman made a layup with 3:20 left in the first quarter to end Alcoa’s run, but the Lady Tornadoes would go on 6-0 run to take a 13-4 lead with 1:43 left after a layup by Karli Haworth and an Eden Davis 3-pointer.

A pair of free throws by Anna Creasy, followed by an Anna Wright free throw would trim the Alcoa lead to 13-7 at the end of the first period.

Haworth would hit two free throws early in the second quarter to stretch the lead back to 15-7, but a three by Cassetty would pull Westmoreland to within 15-11 with 5:40 left in the first half.

A layup by Creasy would make the score 15-13 and two free throws by Cassetty tied the game at 15-15 with 4:09 left until halftime, as the Lady Eagles found themselves on a 12-2 run, dating back to the first quarter.

Trinity Hodge grabbed a rebound and scored, giving Alcoa its first field goal since Edan Davis’ three made it 13-4. 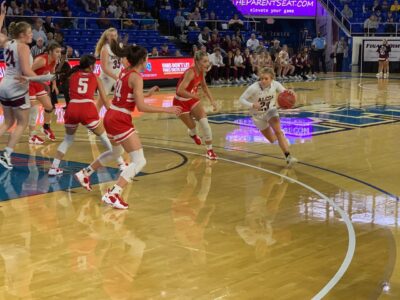 Two Haworth free throws gave the Lady Tornadoes a 19-16 lead with 2:19 left in the second quarter, but a layup by Emma Wright would cut that lead to 19-18 moments later.

Amelia Pfeiffer made a layup to put Alcoa up 21-18, followed by a Macie Ridge layup to extend the lead to 23-18 with 1:13 remaining. Creasy made two free throws with just under one minute left in the half, cutting the Lady Eagles’ deficit to 23-20.

Alcoa took possession with 43 seconds left and ran down the clock but were unable to score at the end of the half, as Haworth missed a layup at the buzzer. The Lady Tornadoes led by three at intermission.

Eden Davis scored a layup early in the third quarter to give Alcoa a 25-20 lead, but Norman would answer to cut the Lady Tornadoes’ lead to 25-22.

Alcoa took a 28-23 lead with 4:19 left in the third on an Amelia Pfeiffer layup. Westmoreland would answer with a Norman layup to make the score 28-25.

The Eagles inched closer with a jumper by Cassetty, cutting the Lady Tornadoes’ lead to 29-27 with 1:38 to go in the third quarter.

Amelia Pfeiffer split a pair of free throws to give Alcoa a 30-27 advantage. Norman missed a shot at the end of the quarter, sending the Lady Tornadoes to the fourth quarter leading by three.

A pair of free throws by Amelia Pfeiffer stretched the lead to 32-27 early in the fourth, but a layup by Norman would make the score 32-29.

Haworth made a layup on the other end for a 34-29 lead with 5:12 remaining in the game. Every time Westmoreland did something to inch closer, Alcoa seemed to have an answer and managed to keep its distance on the scoreboard.

With just under five minutes remaining and shots not falling for Alcoa’s guards, Baumann decided it was time for the Lady Tornadoes to go stall and play keep away.

“This is something we worked on at the very beginning of the year,” Baumann said. “I told them that I felt like this is something we can do with the guards we have and the way they shoot free throws and I felt like we had a chance to get here. Once we get a lead like that, against a team that defends as well as they do, people have a hard time coming out and staying with them and the fact that they knock down free throws makes it even better.” 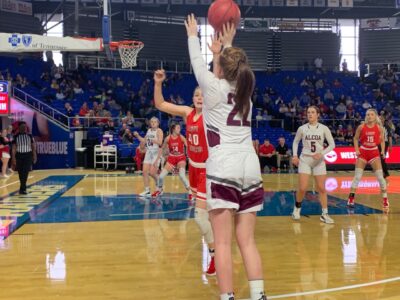 Eden Davis (22) hits Alcoa’s only three of the game, as the Lady Tornadoes won despite shooting 31-percent from the field and 1-of -11 from long range. Photo by Brian Hamilton

Westmoreland fouled Haworth and the junior sank both free throws, giving Alcoa a 36-29 lead. Creasy answered with a layup on the other end to cut the Lady Eagles’ deficit to 36-31 with 3:35 remaining.

Eden Davis was fouled with just over two minutes remaining and calmly stepped to the line and converted both foul shots for a 38-31 lead.

Creasy missed a layup on the other end and Amelia Pheiffer grabbed the rebound and passed out to Haworth, who was fouled. Haworth made both free throws with 1:38 left, giving the Lady Tornadoes a commanding 40-31 lead that felt more like a 20-point lead at the time. Alcoa had the distance it needed to salt the game away, as long as it made free its throws.

Davis hit two more free throws to make the score 42-31 with just over one minute remaining. Norman hit a three on the other end to cut Westmoreland’s deficit to 42-34, but Alcoa made its free throws down the stretch to come away with a 47-38 win, ending the Lady Eagles’ 25-game win streak and advancing to their first Final Four since 1984.

The Lady Tornadoes played lock down defense to win the game despite shooting just 31-percent from the floor and 1-for-11 from 3-point range.

“It’s tough if you haven’t been here before because it’s tough to get here, but just the environment in a big arena, to get used to shooting here,” Baumann said. “They had a little bit to do with that too with their defensive effort.”

Karli Haworth led all scorers with 17 points. The junior struggled from the field, going 2-for-12 and 0-of-6 from deep, but made up for it with her poise at the free throw line, going 13-of-15 and helping Alcoa ice the game in the fourth.

Senior Eden Davis finished with 12 points and five rebounds and hit the Lady Tornadoes’ only three of the game. 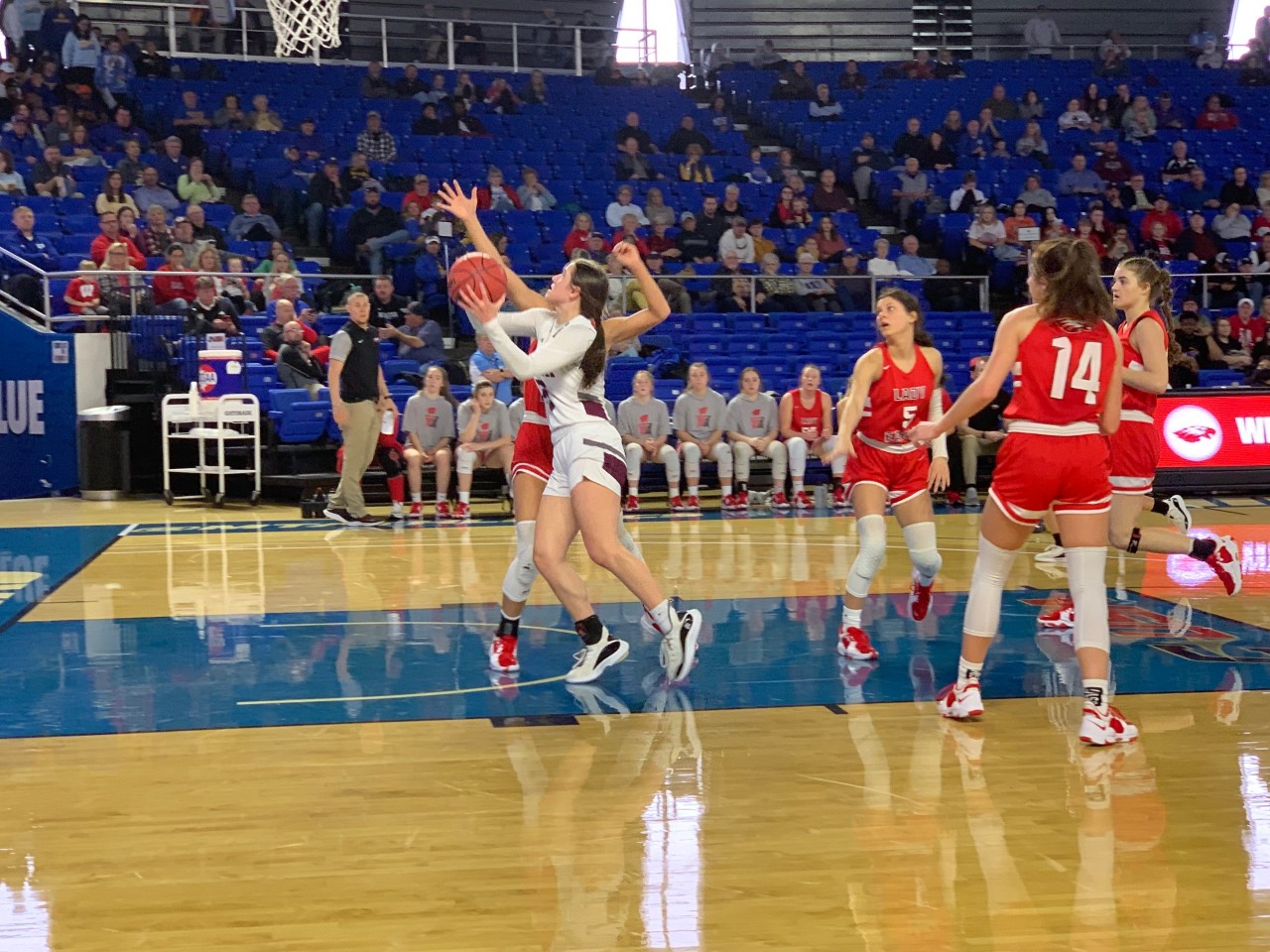 “Eden did what she did at substate for it, which is hit big shots,” Baumann said. “I think she hit our only three and she had a big finish in the second half when we were struggling to score for a little bit, she took it to the hole strong and finished with some contact. She’s the only senior we’ve got, and she’s been a great senior leader for us and just brings another level of toughness to our team.”

The Pheiffer sisters have only been eligible to play since early February after transferring from The King’s Academy but have provided much needed rim protection in the tournament.

“They’ve just been a big presence in the paint,” Junior guard Karli Haworth said after the game. “We didn’t have much size and them coming… just them coming in adds so much to our team. They’re really unselfish and even if they’re not hammering it down in the paint, they have good kick outs and they’ve really just helped us a bunch.”

“They’re just a huge defensive presence and rebounding presence,” Baumann said. “They bring a great basketball I.Q. as well. They can make adjustments. They’ve done a great job all year of being leaders on the bench and now they’re on the court being leaders.”

The Pfeiffer sisters were part of the 2020 King’s Academy team that were runners up in Division II Class A and Amelia said the experience has helped her to stay calm during Alcoa’s tournament run.

“I remember looking at Jennifer Sullivan in the locker room when we were playing in the championship game and I was like, ‘I’m nervous,’ and she said, ‘Don’t be,’ and I had one of those moments with (freshman) Kara Pitts today,” Amelia Pheiffer said. “She was like, ‘I’m nervous,’ and I was like ‘Don’t be, it’s just a game.’ At the end of the day, it’s just a game.”

While junior guard Macie Ridge only finished with four points and four rebounds, she had the most important task of the day, which was guarding Westmoreland’s best player Alana Eakle.

“Alana Eakle is probably an all-state player and going to play college ball,” Baumann said. “She’s easily their leading scorer and I she held her to one point. She’s a great player and Macie’s a great shooter, but she did an amazing job of guarding her and that was a big key for us coming into the game, because she’s the majority of their offense.”

Alcoa (24-12) will face top-ranked Westview (30-2) in the state semifinal at 6 p.m. on Thursday evening at the Murphy Center in Murfreesboro.