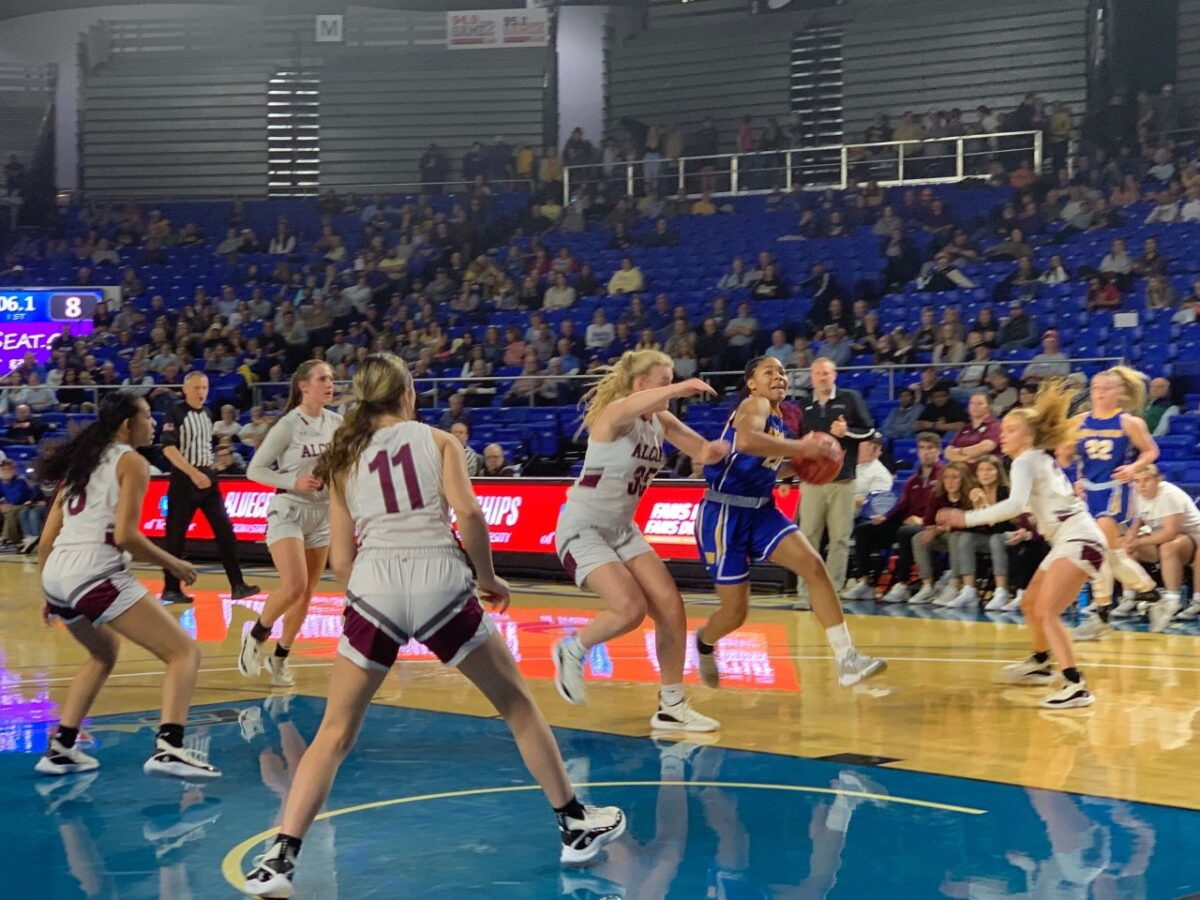 MURFREESBORO – Alcoa got off to a fantastic start in its first Final Four game since 1984, as the Lady Tornadoes led Westview 12-5. Jada Harrison got hot early, however, scoring all nine points in the first quarter, as Alcoa could only muster two points in the second quarter. The Lady Tornadoes would retake the lead early in the third, but Harrison and Westview would be too much in the end, as the Lady Chargers would go on to win 44-32 and advance to the Class 2A state championship game. 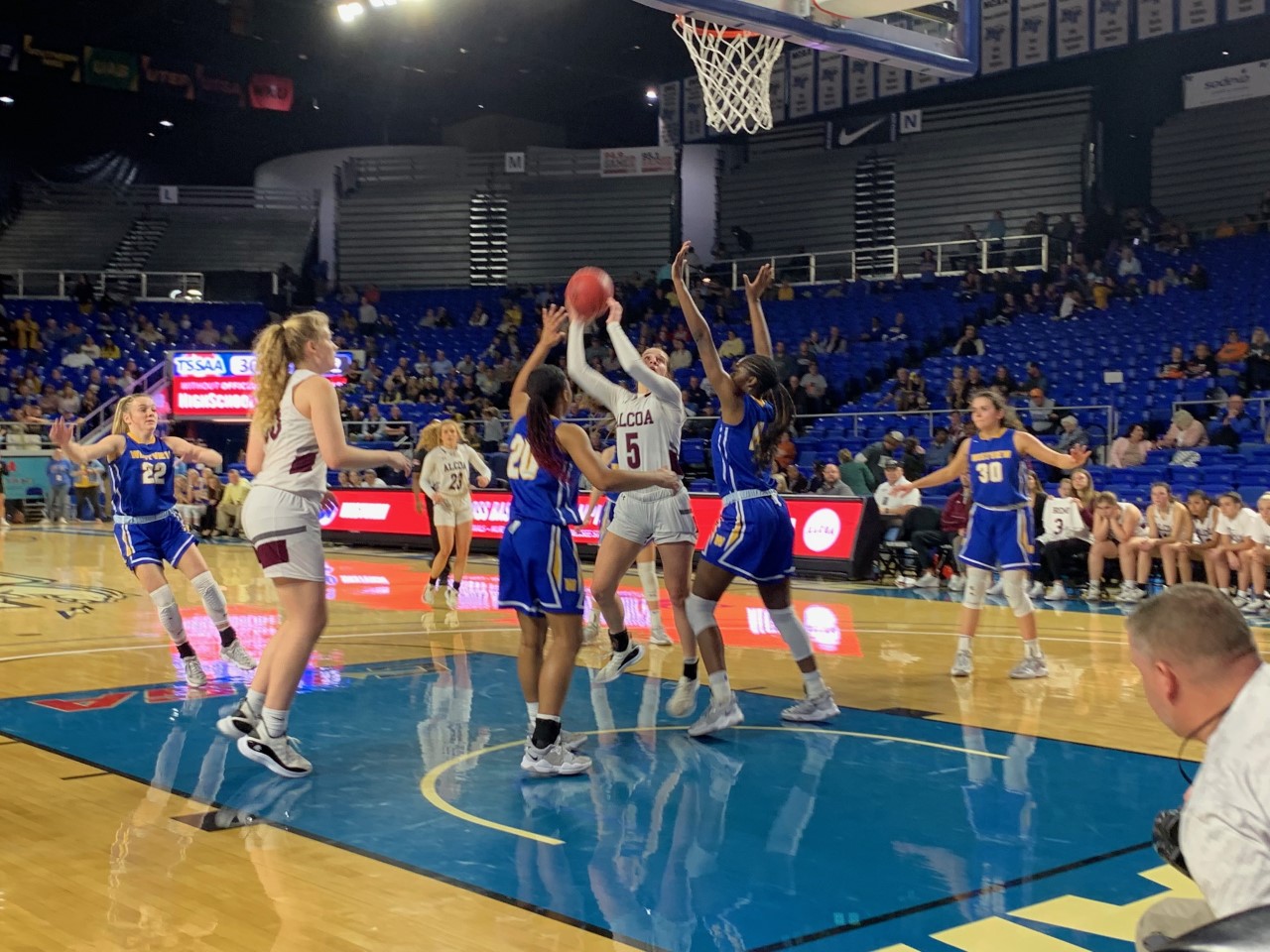 Alcoa’s Macie Ridge (5) goes up for a basket against Westview’s Jada Harrison (20) and Angelina Barr (42) during the Lady Tornadoes’ 44-32 Final Four loss. By Brian Hamilton

As far as playoff experience is concerned, it was a matchup of David vs. Goliath. Westview was making its 10th consecutive Elite 8 appearance, while the Lady Tornadoes were in unfamiliar territory.

“It makes a difference; obviously playing on this court makes a difference,” Alcoa coach David Baumann said. “They’ve done it year in and year out. It was good for us to come down here. We’ve only got one senior and we’re getting everybody else back. We’ll add Mak (Bremer), who was injured this year, and we have a pretty good freshman class coming in, so we feel like we’ve got a good shot to get back here, but we’ve got to improve.”

“Obviously, we didn’t shoot it well this week, especially me, so you’ve just got to learn how to play in different gyms, especially at this level,” Alcoa junior Karli Haworth said.

Alcoa struggled shooting from the field in their Elite 8 game against Westmoreland, making just one three, but it looked like the Lady Tornadoes had regained their shooting touch early on against Westview.

Eden Davis put Alcoa on the board first when the senior was fouled on a 3-pointer and sank all three free throws for an early 3-0 lead.

Westview’s Jada Harrison would immediately answer with a three of her own, tying the game at 3-3 with 6:10 left in the first quarter.

Macie Ridge hit a three for the Lady Tornadoes, making the score 6-3, but Jada Harrison answered again with a jumper to make the score 6-5.

Alcoa then proceeded to go on a 7-0 run, as Ansley Pfeiffer, Eden Davis and Amelia Pfeiffer each hit layups, giving the Lady Tornadoes a 13-5 lead with just over one minute left in the first.

Jada Harrison hit a three with 1:10 left to cut the Lady Chargers’ deficit to 13-8, followed by a free throw to make the score 13-9 with four seconds remaining.

The Lady Tornadoes led by four at the end of the first quarter, but Harrison had already found her groove early in the game, despite Macie Ridge’s defense.

Angelina Barr scored the first Westview points that weren’t by Harrison, when she hit a free throw with 6:23 left in the second. McCall Simms followed with a three to trim the Lady Tornadoes’ lead to 15-13. 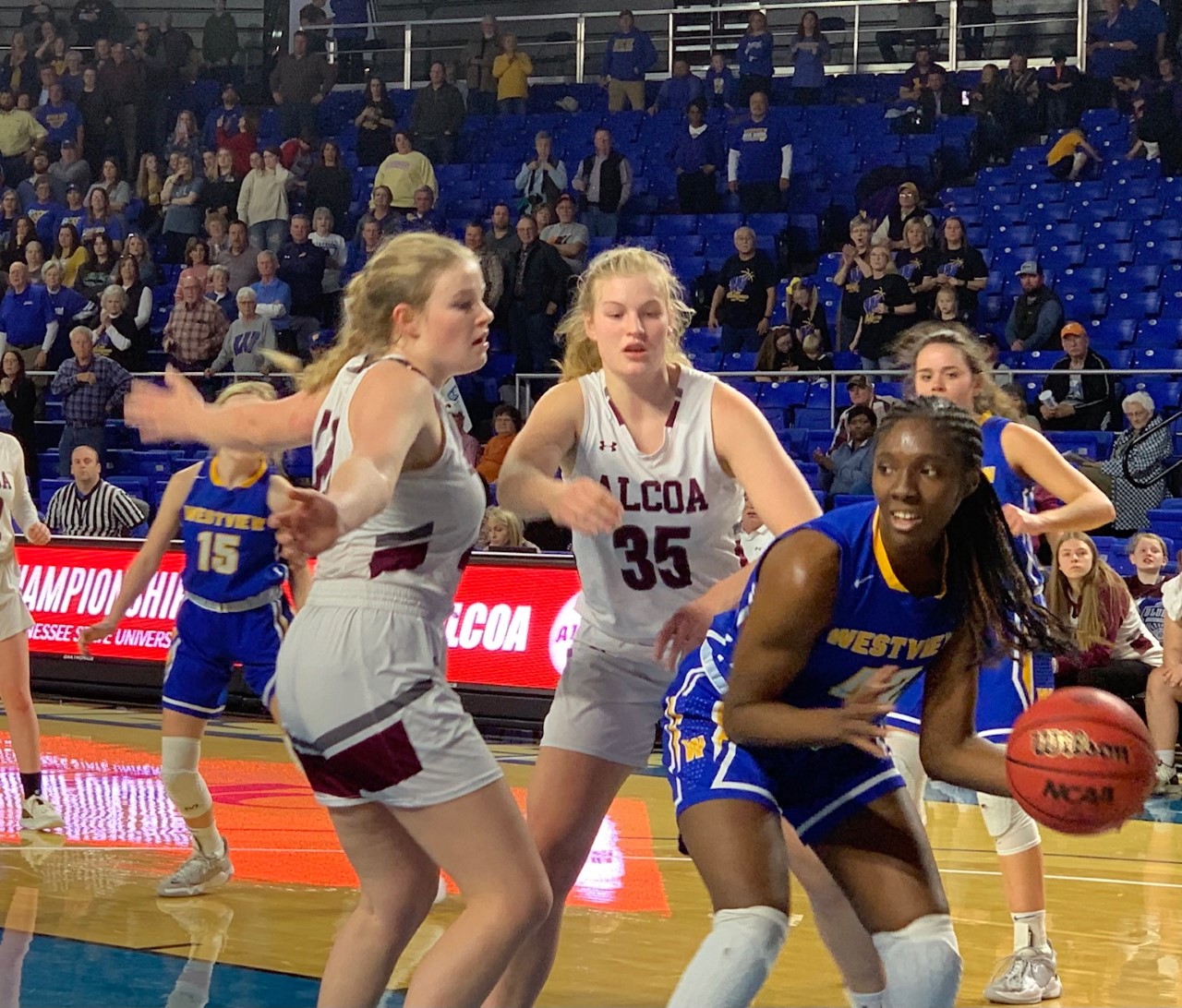 Harrison hit a jumper to tie the game at 15-15 with 5:30 left before halftime. A 3-pointer by Harrison gave the Lady Chargers a 19-15 lead with just under four minutes left, as Westview capped a 10-0 run to go to halftime with a four point lead.

Alcoa managed only two points in the second period, but were still within striking distance down 19-15 at the break.

“We quit hitting shots for one thing,” Baumann said of his team’s play in the second quarter. “Amelia (Pfeiffer) going to the bench with two fouls was big also. They’re good and they had a little bit to do with that too. We scored two (points) in the second quarter and we’re in a four-point game, but I felt like the game just got away from us late.”

Alcoa tied the game early in the third quarter as the Lady Tornadoes came out and scored on baskets by Ridge and Amelia Pfeiffer, tying the game at 19-19 with 6:23 left in the third.

Ridge hit a three on Alcoa’s next trip down to put the Lady Tornadoes back ahead 22-19, as they opened the second half with a 7-0 run.

“I felt like we could go inside or at least play inside out,” Baumann said of the early third quarter run. “We were able to do that and able to finish. We were able to get some stops too. Harrison is a heck of a player and Macie came out in the third quarter and really did a good job of guarding her.”

Simms scored on a layup to make the score 22-21, followed by a Jillian Brigance three to put Westview back in front 24-22 with 4:12 left in the third quarter.

A layup by Barr, followed by a conventional 3-point play by Harrison gave Westview a 29-22 lead, as the Lady Chargers answered Alcoa’s 7-0 run with a 10-0 run.

Ansley Peiffer hit 1-of-2 free throws with 14 seconds left to make the score 29-23 at the end of the third quarter.

Harrison opened the fourth quarter with a layup to push the Westview lead back to 31-23. but a Ridge jumper would pull the Lady Tornadoes back to within five.

Westview’s lead swelled to 11 when Brigance nailed a three, followed by a Harrison layup, making the score 36-25 with 5:09 left, forcing Alcoa to call a timeout.

A layup by Amelia Pfeiffer cut the Lady Tornadoes’ deficit to single digits (36-27), but a layup by Simms would put the Lady Chargers ahead 38-28 with 4:34 remaining. 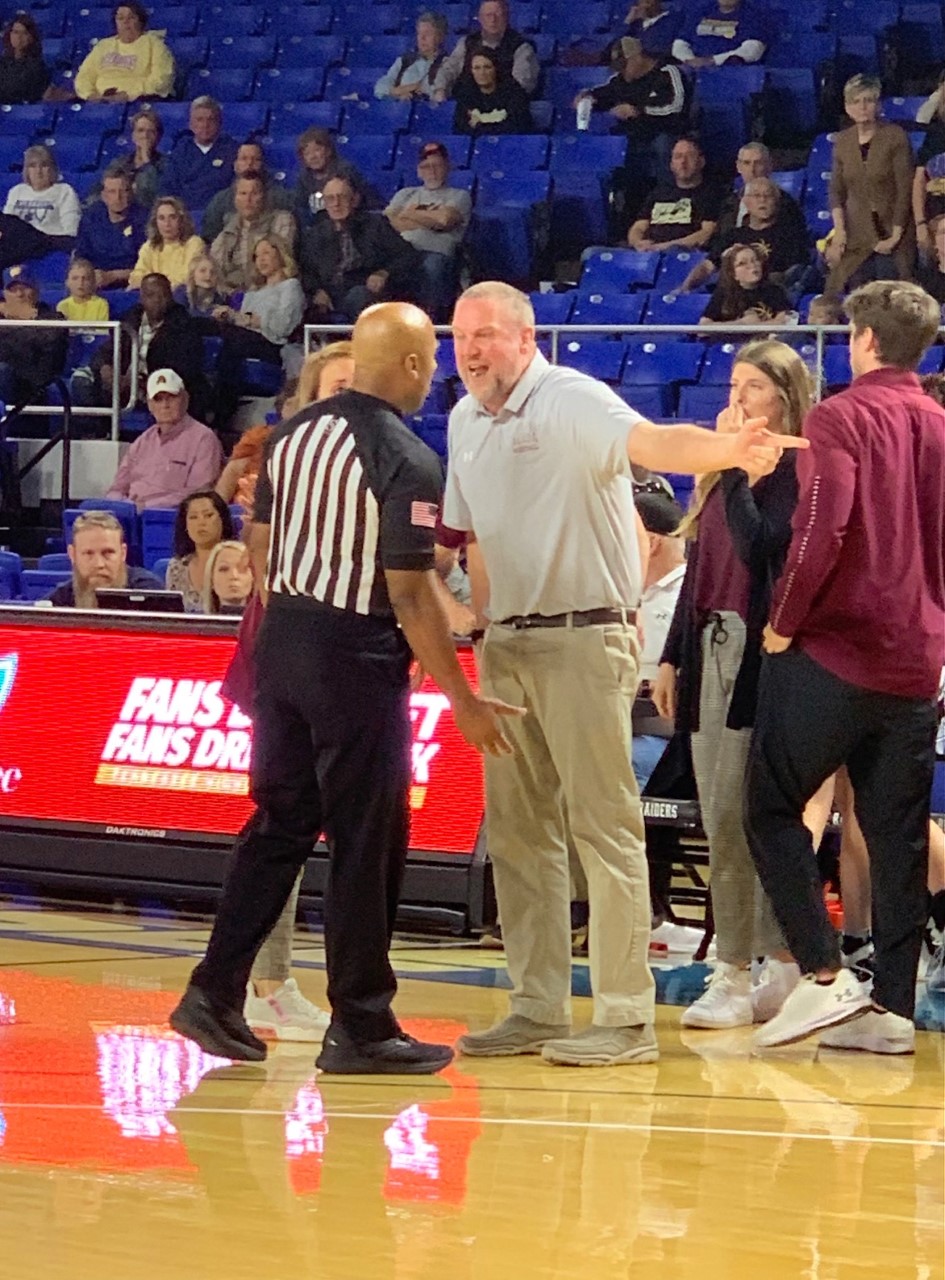 Amelia Pfeiffer came down and answered with another layup, but Harrison would come back with a layup of her own, stretching the Westview lead back to double digits.

Barr hit a layup with just under two minutes left in the game to give Westview a 42-30 lead, as the Lady Chargers would go on to win 44-32, advancing to the state championship game.

“I was proud of the fight,” Baumann said of his team’s effort. “We’ve got some competitive girls, but they’ve just got to get a little bit better.”

When juniors Haworth and Ridge spoke with reporters after the game, the duo was already looking toward next season and how hard they need to work to get back here in 2023.

“Our mindset is to just work all offseason to improve,” Ridge said. “We’ll have an even stronger team, and we’d like to come back next year and win it all.”

Haworth said the environment was much different than the typical high school gym environment, which is something that she wants to work on going forward.