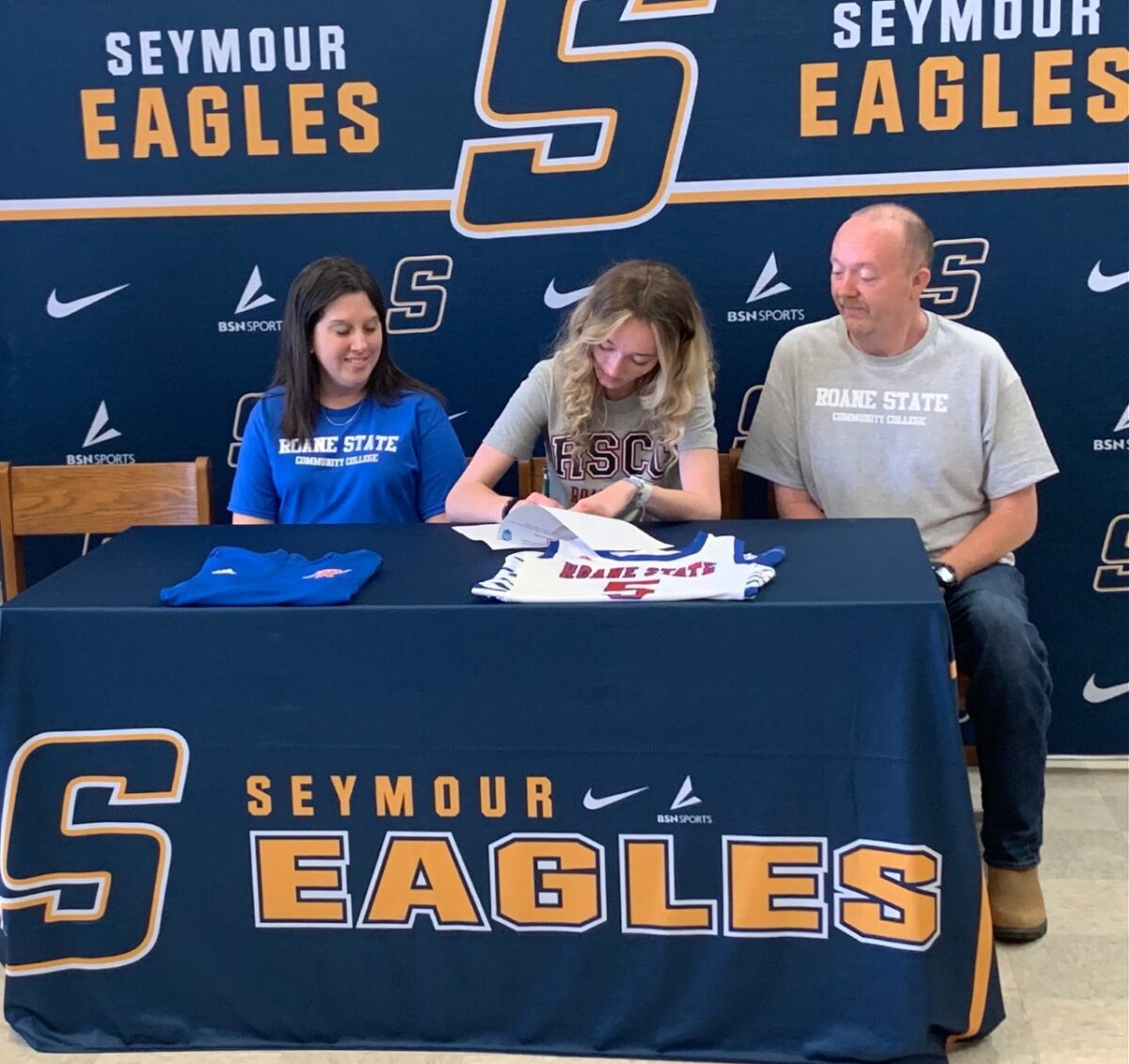 SEYMOUR – After missing most of her junior year with injuries and COVID-19, Emma Watson had a stellar senior season, helping lead Seymour to a district and region championship, as the Lady Eagles finished with 29 wins and fell just one short of a berth in the state tournament.

Watson said she thought her senior year would be her last on the hardwood.

“I went into my senior year without any offers, and no one had asked me anything or reached out because I was out all of last year, being hurt and then with COVID, so I thought that it was already too late for that.” 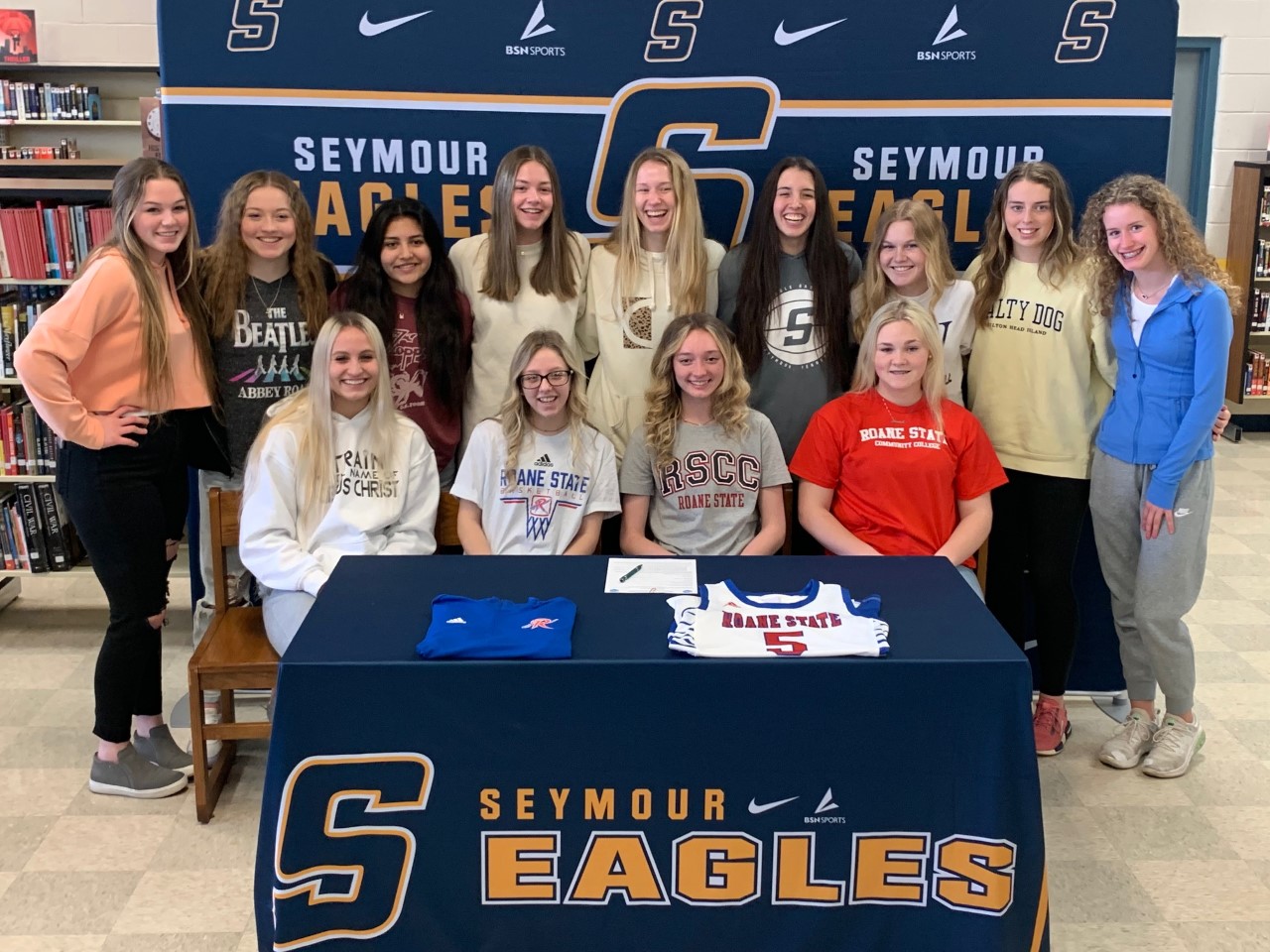 Emma Watson with the Lady Eagles basketball team at her signing on Wednesday afternoon. Photo by Brian Hamilton

On Wednesday, Watson fulfilled her dream of playing basketball at the next level, as the senior guard signed her letter of intent to play at Roane State Community College next season.

“I didn’t think that it was going to happen, so I am really excited that I get to keep playing and that the substate game wasn’t my last game,” Watson said. “Coach (Hernandez) really did help me through everything I went through last year and was a big part of the reason that I am the player I am today.”

“When we started the year, I would tell you that I didn’t think this was a possibility,” Seymour coach Greg Hernandez said. “Me and her had a real talk before the year started, telling her that I’m not worried about the future or what she’s doing next year, but I was worried about her attitude, her work habits and her ability to be a good teammate. I challenged her and she responded.”

Hernandez said that Watson’s play continued to improve throughout the year, which led to her getting the opportunity to continue her basketball career.

“Throughout the year, her play continued to improve, and she really continued to be a bigger factor for us, which just opened up different opportunities,” Hernandez said. “I’m just glad she’s getting this opportunity on the next stage.”

The fourth-year Seymour coach said that Watson’s defense and rebounding ability helped her get this opportunity, more than her scoring abilities.

“The way that we play defensively, in regard to our activity and our man-to-man and our principles, I think it just prepares kids to go anywhere,” Hernandez said. “At the end of the day, if a freshman can come in with the ability to defend, that’s what is going to get them on the floor, more than scoring. From my history of coaching at the college level, you’re now so wowed about scoring, but if this kid can rebound and this kid can defend…obviously she’s got the ability to do that with her athleticism, which is going to set her up nicely as a freshman next year.”

Roane State head coach David Harnish echoed those sentiments, as he believes Watson’s style of play coincides with theirs and will help her be an instant contributor for the Lady Raiders.

“Since I’ve been here the last two years, we’ve turned this team into a team that can full-court press and found kids that can shoot the three well and spread the floor and drive it, so I think she fits our style very well,” Harnish said. “I’ve seen Emma play several times over the last couple summers and this year and like I said, she’s a kid that fits our program very well and I think that’s what’s important today, is kids finding out where to go that fits them, rather than a program that they have to adjust to, but we full-court press and are a defensive team and Emma likes doing that. You can’t find that today and I think she will fit in very well.”

Watson was the only senior on a Seymour team that went 29-6 and came up one win shy of the Elite 8 in Murfreesboro and Hernandez said it was sometimes tough for her, being the only player in her class, among other obstacles, but she persevered to earn the opportunity to play at the collegiate level.

Roane State didn’t reach out to Watson until February, as Seymour began to embark on its tournament run, which saw the Lady Eagles win the district and region title both in the same year for the first time since 2004.

“They kind of kept in touch with me for the rest of the season and would text me things like, ‘Good luck at your game’, or ‘Good game last night’, and things like that,” Watson said. “I just liked how Roane State was and I liked the few girls on the that I did get to talk to, and I liked Coach Harnish.”

Watson visited Roane State last week before making her decision. She said she talked to Maryville College also, but made her decision based on the fact that Roane State could offer a scholarship for tuition. She also considered Bryan College, but never went for an official visit.

When asked if she has aspirations of playing at a four-year school after Roane State, Watson said she would like to, if the opportunity presents itself.

“I would like to, hopefully, go into another school to play the rest of my (four) years, but whatever happens, happens,” Watson said.