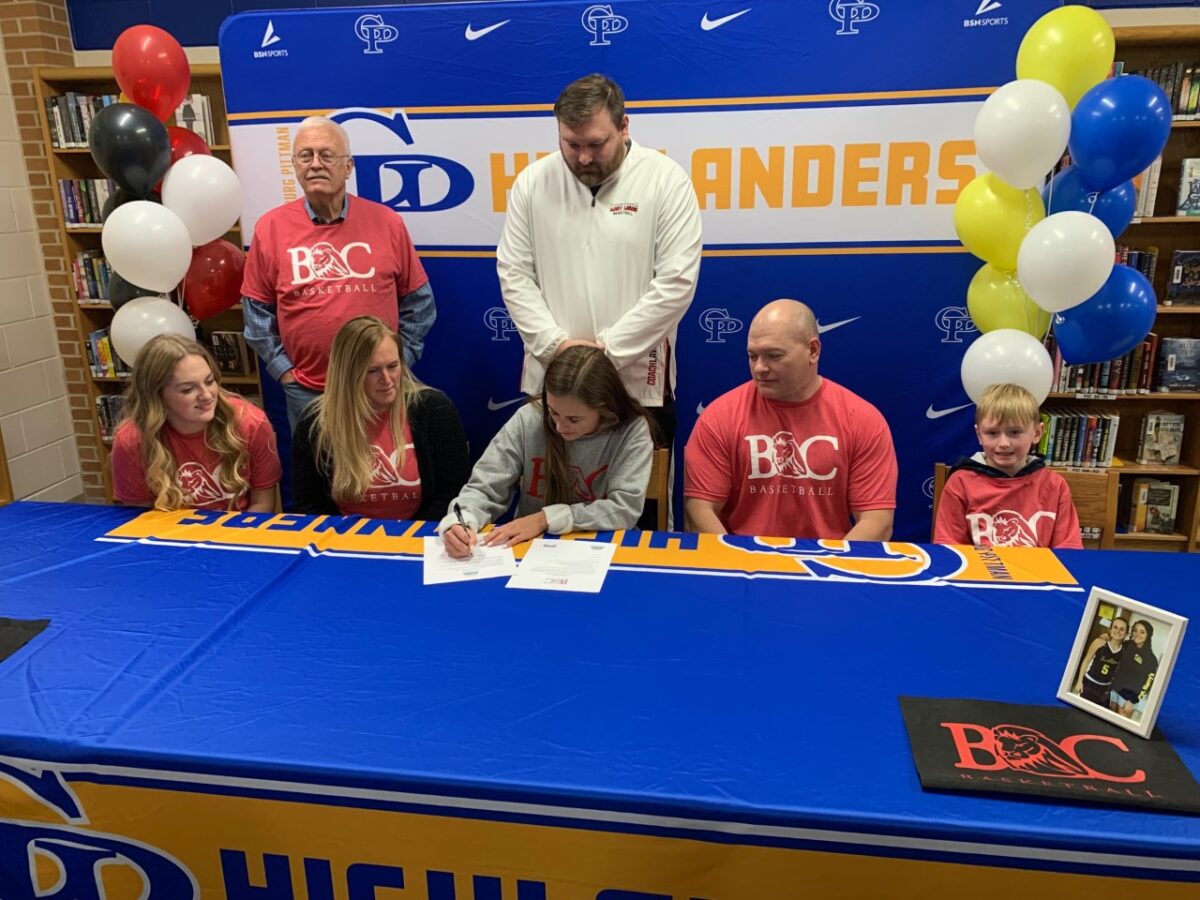 GATLINBURG – Kayle Yates transferred to Gatlinburg-Pittman after spending the first three years of her high school career at Lakeway Christian Academy and will play for her third school in as many years, but this time at the collegiate level.

Yates signed her letter of intent to play basketball for NAIA Bryan College on Friday afternoon at Gatlinburg-Pittman High School.

“I am definitely blessed that I have this opportunity,” Yates said. “Not a lot of people get this opportunity. I’ve been working a very long time, trying to get this opportunity. Me and (Bryan College) Coach (Bryon) Lawhon are pretty close and we text about every day, just talking about the future for the program and everything and how we want to eventually win a national title.”

Bryan College will definitely provide Yates with an opportunity to win a championship, as the Lady Lions finished 32-2 last season and ultimately lost to eventual national champion Thomas More in the Sweet 16 during Lawhon’s first year as head coach. 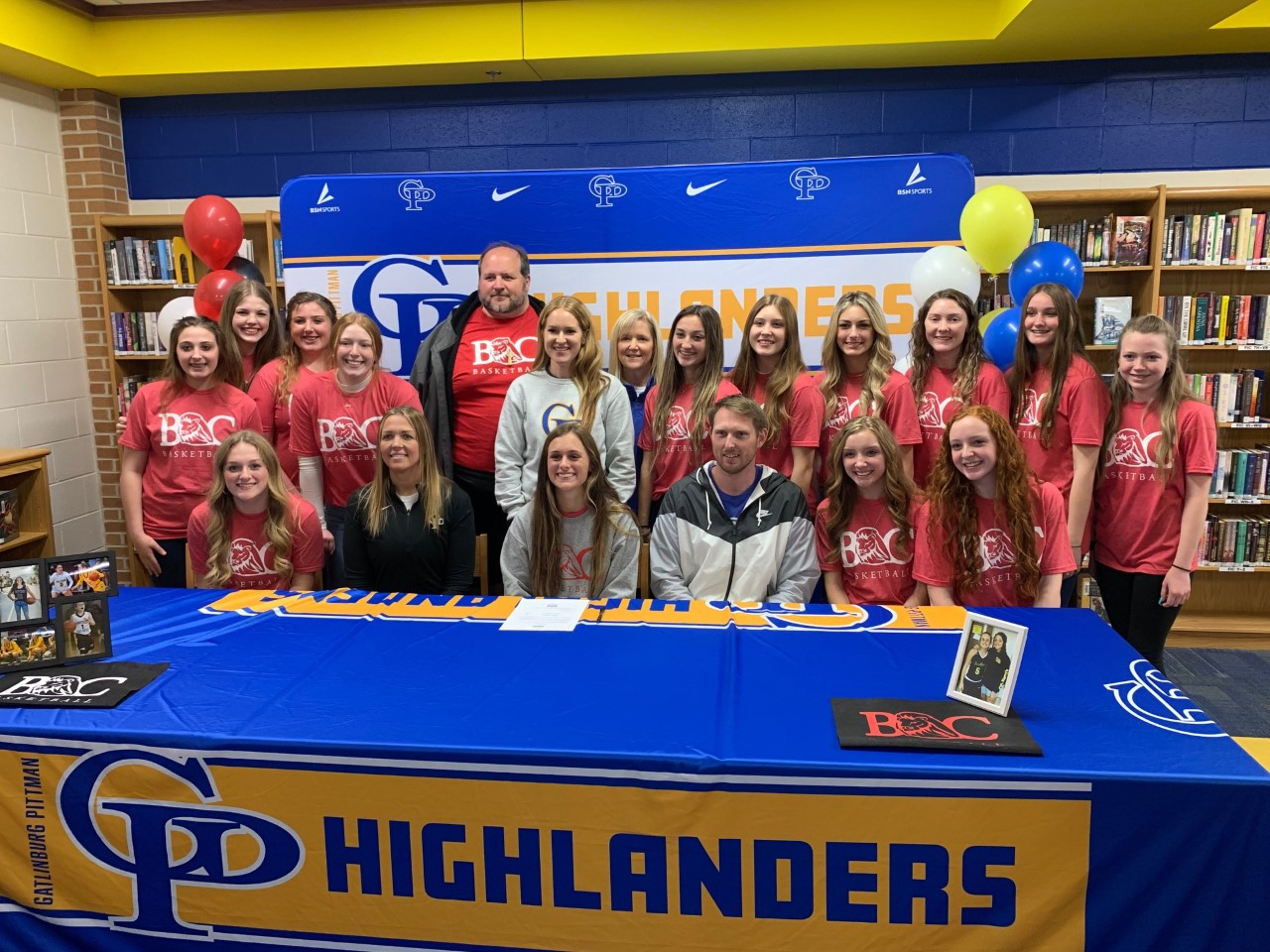 Kayle Yates and her Lady Highlanders teammates. Yates signed her letter of intent to play for NAIA Bryan College on Friday afternoon at Gatlinburg-Pittman High School. Photo by Brian Hamilton

Competing for championships is nothing new for Yates, as she played for a Lakeway team that won a NACA championship in 2020 and a Gatlinburg-Pittman team that was seconds away from a berth in the 2022 Class 2A state championship game.

“We all knew going into it that it was a really big game, and it was a blessing just to get the opportunity to play at MTSU at the Murphy Center,” Yates said. “We also knew that we were going to be the second team (in school history) to be in the Final Four and our goal was to win it all, but we fell short.”

Going into the 2021-22 season, the Lady Highlanders had lost senior point guard Sydney McCarty from the 2020-21 team and was looking for a guard to step into the starting lineup. While looking for McCarty’s replacement over the summer, Moore found a diamond in the rough when Yates decided to enroll at Gatlinburg-Pittman and join the Lady Highlanders.

“We kind of knew this summer (that Kayle would transfer to GP) when she came to summer workouts that she wasn’t going back to Lakeway for sure, but she was unaware if she was going to be moving to Florida,” Gatlinburg-Pittman coach Katie Moore said. “I guess it was probably July when we knew for sure.”

“McCarty and Leah (Stinnett) kind of shared duties at the point guard position, but I really wanted Leah to be our two guard, just so we could use her more for scoring,” Moore said. “Kayle did a great job of just coming in and filling in where Sydney left off. She scores really well in transition and did a great job of pushing the ball up in transition, which is something that we love to do. We really like to score in transition, so she kind of just slid right in there and was a perfect fit from the jump.”

Yates was the primary facilitator on Gatlinburg-Pittman’s offense and rarely had trouble with pressing defenses while pushing the ball up the court in an upbeat tempo, which coincides with the style of play that Coach Bryon Lawhon likes to run at Bryan College.

“I think that because Kayle is just so self-motivated and self-driven, I think that she’ll be great at the next level,” Moore said. “Kids like her, that like to work on their own and don’t need somebody to kind of motivate them to go hard, always do well. I know that going to Bryan’s team, they run similar things defensively and they teach the same principals. I know they score lots of points and score in the 90s, or something, so transition scoring is going to be huge. I think she’ll do a great job of being able to do that and step in and do anything the coach needs her to do.”

Moore said it was a pleasure to coach Yates this past season, as her work ethic and leadership played a big part in the Lady Highlanders being able to advance to the Final Four and almost earn its first-ever berth in the state championship game.

“I think one thing (Kayle) does very well is that she leads by example, just because she is very self-motivated and she works hard all the time,” Moore said. “I think that because she does that, she feels like she can hold others accountable. Normally, when you’re doing what you’re supposed to, it gives you more of a right to do that. She did a great job of leading us. I really just think that there’s lots of different aspects of her game, but I think her leadership and her ability to speak up will help her tremendously. There’s lots of kids now who don’t feel comfortable speaking up or calling people out and Kayle does that.”

Lawhon said he discovered Yates early on in her high school career but fell in love with her style of play after seeing her run Gatlinburg-Pittman’s offensive schemes.

“We saw her after her freshman year at some AAU and summer camps and kind of kept up with her during her sophomore and junior years,” Lawhon said. “She transferred here and obviously, we kept close tabs on her and got a little more serious about her when I saw that Katie (Moore) runs a similar style of play that we try to run, and I saw Kayle kind of flourish in that system. I knew then that she would be a good fit for us.”

He believes that Yates will have an opportunity to contribute on a championship-caliber team early on, due to her ballhandling skills and perimeter shooting.

“I don’t promise these kids that they’re going to come in and play, but we anticipate Kayle coming in and really contributing in some way early on as a freshman,” Lawhon said. “That’s the expectation, now it’s up to her to do that, but what I feel translates for us is that she can play the point guard position and she can play the shooting guard position. She’s versatile when it comes to that. She plays with a pace on offense, and we averaged 91 points-per-game this year. We like to go. We push the ball, and we shoot the ball, and she gets the ball up the floor quick as a point guard, which is something that is really where I’m trying to go. She can also shoot the ball really well from the three-point line. We hit 399 threes as a team this year, which was a program record.”

Yates said that she plans to major in sports medicine once she enrolls at Bryan College.