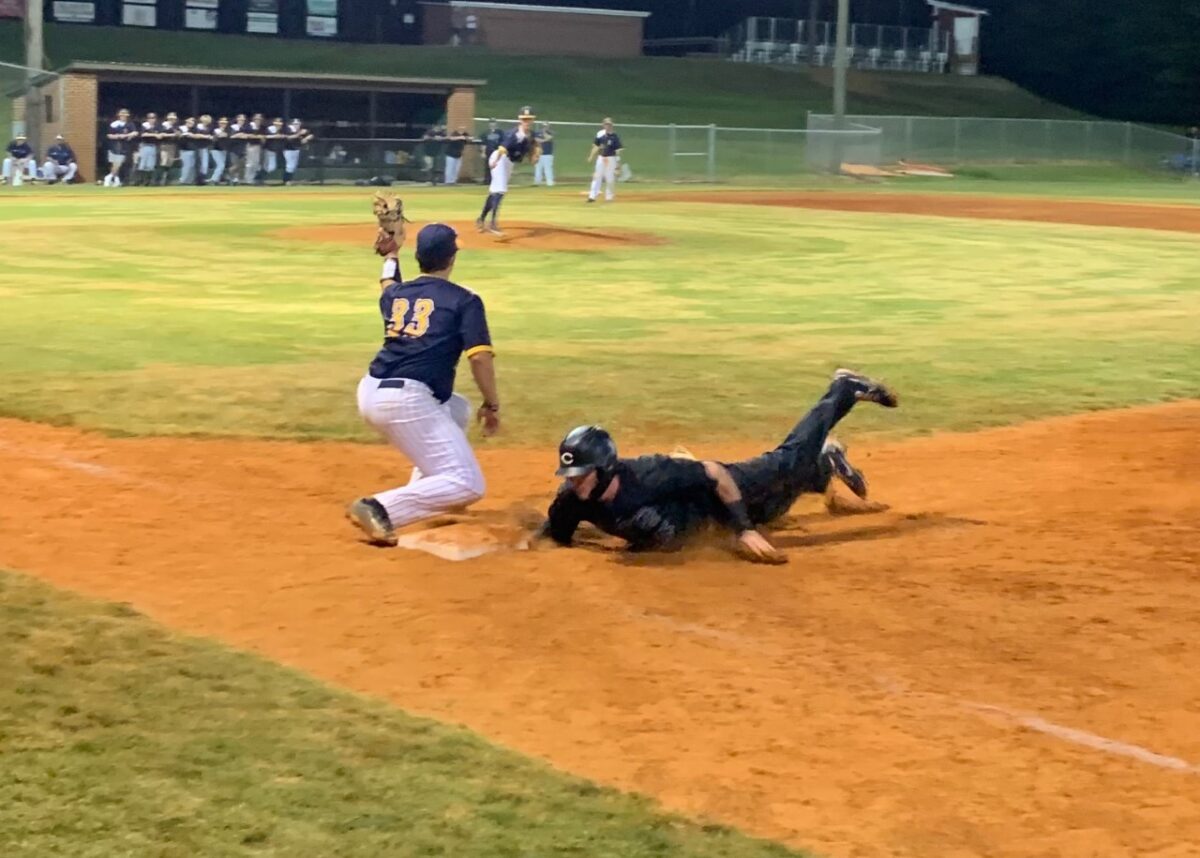 STRAWBERRY PLAINS – Tuesday’s game between Carter and Seymour was a game of runs. The Hornets jumped out to an early 3-0 lead in the second inning and then remained scoreless for the next three innings, while Seymour battled back to tie the game at 3-3 in the top of the sixth. Brennan Chamberlain stepped to the plate in the bottom of the sixth and hit a solo home run that helped propel Carter to a 6-3 win. 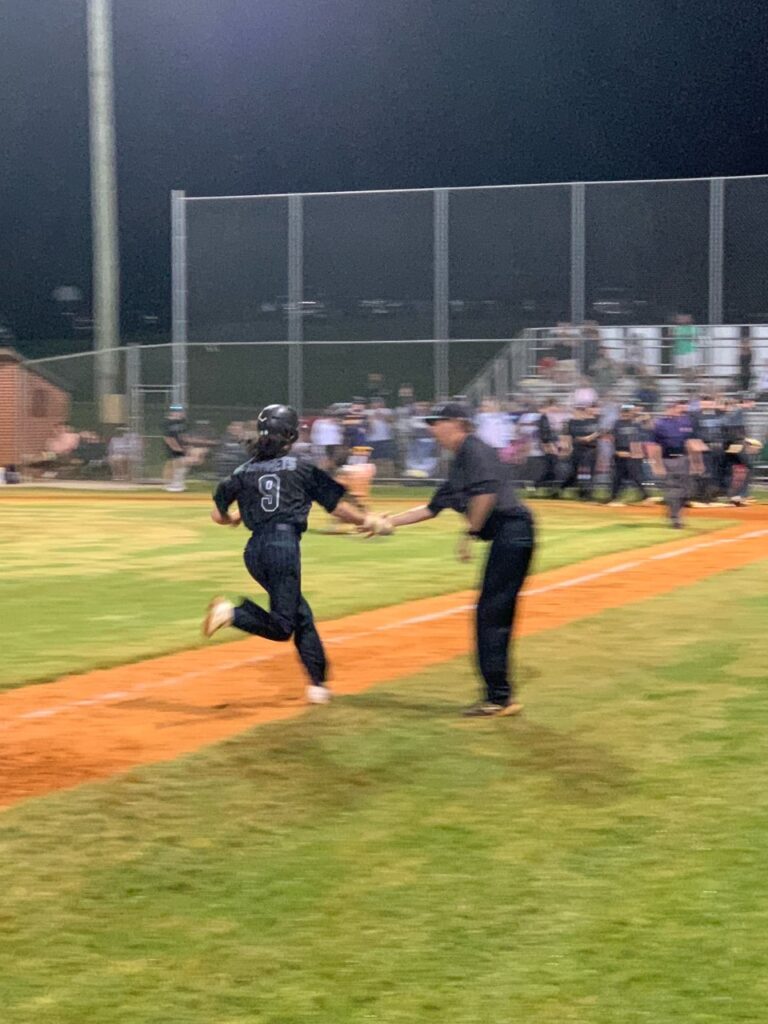 Carter’s Brennan Chamberlain (9) rounds third base after hitting a solo home run to give the Hornets a 4-3 lead in the bottom of the sixth inning during the 6-3 win. Photo by Brian Hamilton

Starting pitcher George Davis made quick work of the Seymour batters in the top of the first inning and the Hornets then went to work during the bottom of the inning.

Tanner Humphrey singled on a line drive to left field to send Jackson Steele and Eli Painter home for a 2-0 lead with two outs. William Shelton lined out to center fielder A.J. Berry for the third out, however, getting Seymour out of the inning.

Davis mowed down the next three batters in the Eagles’ lineup, as the Carter ace struck all three batters out either looking or swinging.

Brennan Chamberlain advanced to third on a wild pitch by Seymour pitcher Drew Childress. Painter then hit a sacrifice fly to right field and Chamberlain tagged up and went home for a 3-0 Carter lead in the bottom of the second inning.

Davis continued to be a terror on the mound, as the Eagles couldn’t seem to hit the senior early on. Alex Hutcherson, Andrew Baird and A.J. Berry all struck out swinging in the top of the third inning.

Seymour would show some signs of life at the plate in the top of the fourth inning with two outs, as Josh West hit a double to right field, sending Coby Johnson across the plate to make the score 3-1.

Aaron Webb then singled on a hard ground ball to score West and trim the Eagles’ deficit to 3-2. Carter would get out of the inning without any more damage, with the Hornets clinging to a one-run lead.

Neither team scored throughout the next couple innings until Drew Childress laid down a sacrifice bunt for Seymour’s second out, but not before Peytan Price crossed home plate to tie the game at 3-3 in the top of the sixth inning.

West grounded out to Carter third baseman Levi Massengill for the third out, as the teams went to the bottom of the sixth knotted at three apiece. 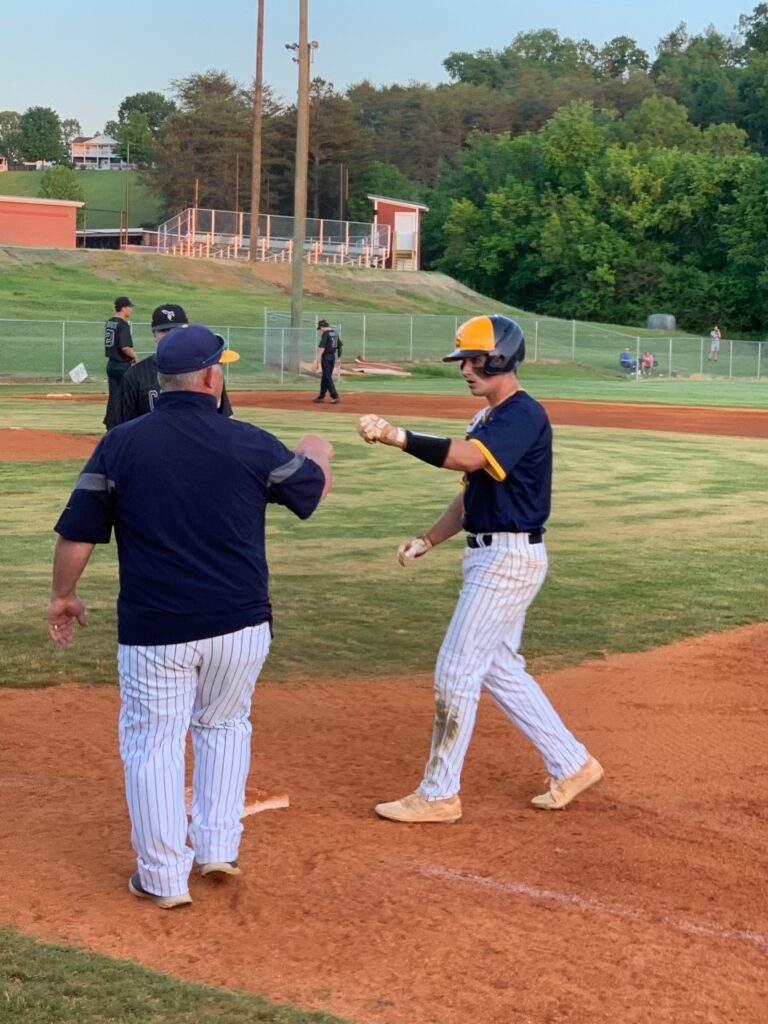 A.J. Berry is congratulated by Seymour first base coach after hitting a single. Photo by Brian Hamilton

“It just about getting some confidence in these guys,” Seymour coach Kyle Koeneman said. “George is a good pitcher and he throws it well. We were struggling that first inning and the first couple innings to getting our timing down. I told those guys to just go up there and see the ball and hit the barrel and lay the bunt down. It makes a difference when you’re up there at the plate and just seeing stuff happen.”

“We had three scoreless innings and really hadn’t had a chance to score, and they had just tied it up with a safety squeeze, so I talked to Brennan (Chamberlain) and told him, ‘I need you to find a way on,'” Armstrong said. “I wasn’t expecting him to go out and hit a bomb. That was just icing on the cake, but I needed him to be the leadoff man and set the table to get momentum back on our side a little bit and he did that and way more.”

“(The home run) kind of took the air out of these guys,” Koeneman said. “When that happened, you could kind of just see it out there, they kind of deflated. That was a good pitch. He just went down and got it. It was a low pitch, but he just got down and got under it and was able to hit it out.”

The Eagles would need three runs in the top of the 7th to extend the game and Davis walked the first Seymour batter but would quickly retire the next three batters with Jake McCord flying out to center field to end the game. The 6-3 win would advance Carter to the district championship. 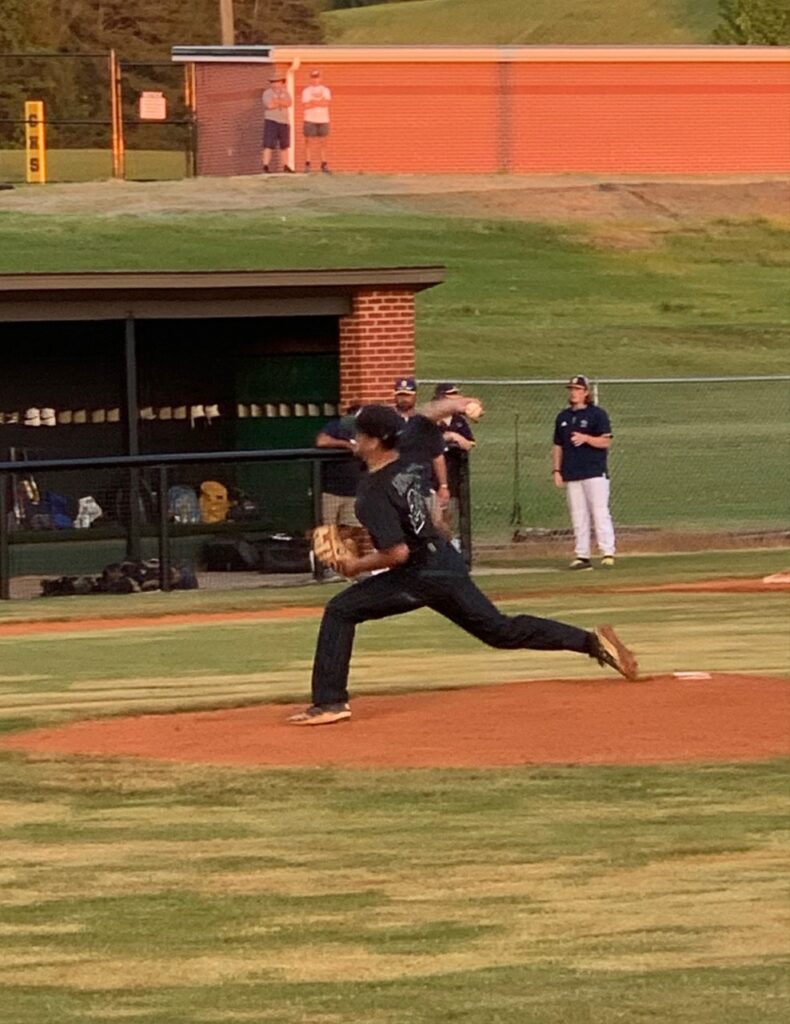 Carter’s George Davis (20) pitched all seven innings for the Hornets, striking out 12. Photo by Brian Hamilton

Davis recorded the win for the Hornets, surrendering three runs on four hits, as the ace went the entire way for Carter and struck out 12, while throwing 118 pitches.

“We wanted to leave him in there,” Armstrong said. “I went out there before the last batter and said, ‘You have five pitches left.’ Luckily, he only threw three, but he pitched his butt off, and he’s done that for us all year, whether it’s starting or coming out of the bullpen. He came out of the bullpen yesterday and faced a batter just to get a save with the tying run on third base, so he’s been huge.”

Bryson Quick took the loss for Seymour, as the freshman went three and one-third innings, allowing three runs on three hits and striking out two.

Drew Childress started the game for Seymour, lasting only two and two-thirds innings, allowing three runs on two hits and striking out six.

Carter (25-7) will take on the winner of Seymour and Gibbs in the district championship at 7:30 p.m. tonight, as the Hornets remain undefeated in region play. The Eagles (12-25) will take on Gibbs (10-20) at 5:30 p.m. this evening with a berth in the regional tournament on the line.