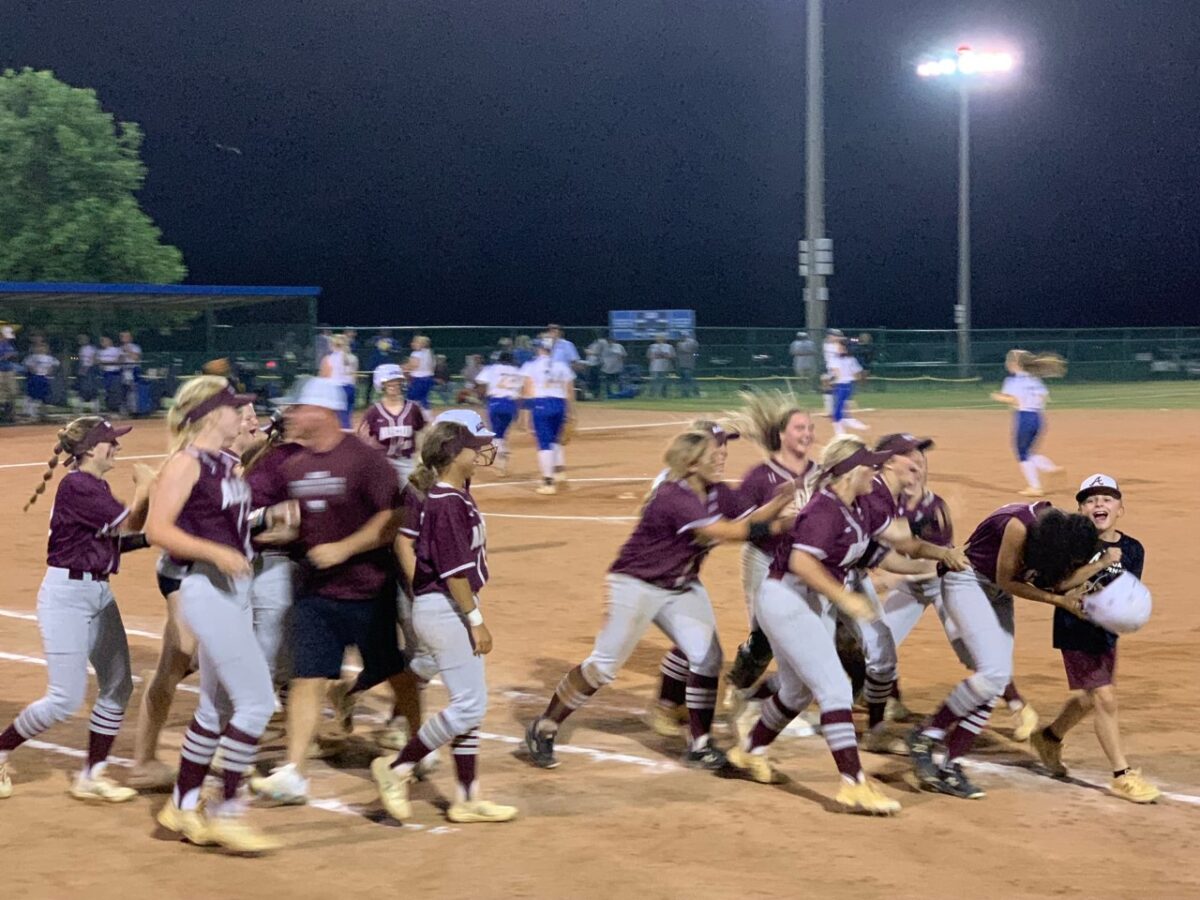 MURFREESBORO – For all the games that were played on Tuesday’s opening day of Murfreesboro’s Spring Fling, Alcoa and Riverside may have saved the best game for last.

The Lady Tornadoes and the Lady Panthers battled into extra innings until nearly 9 p.m. Eastern Standard Time before Trinity Hodge hit a single to first base and an error allowed Kara Pitts to come home for the game winning run. Alcoa just narrowly escaped its first matchup of the week with a 4-3 win in nine innings. 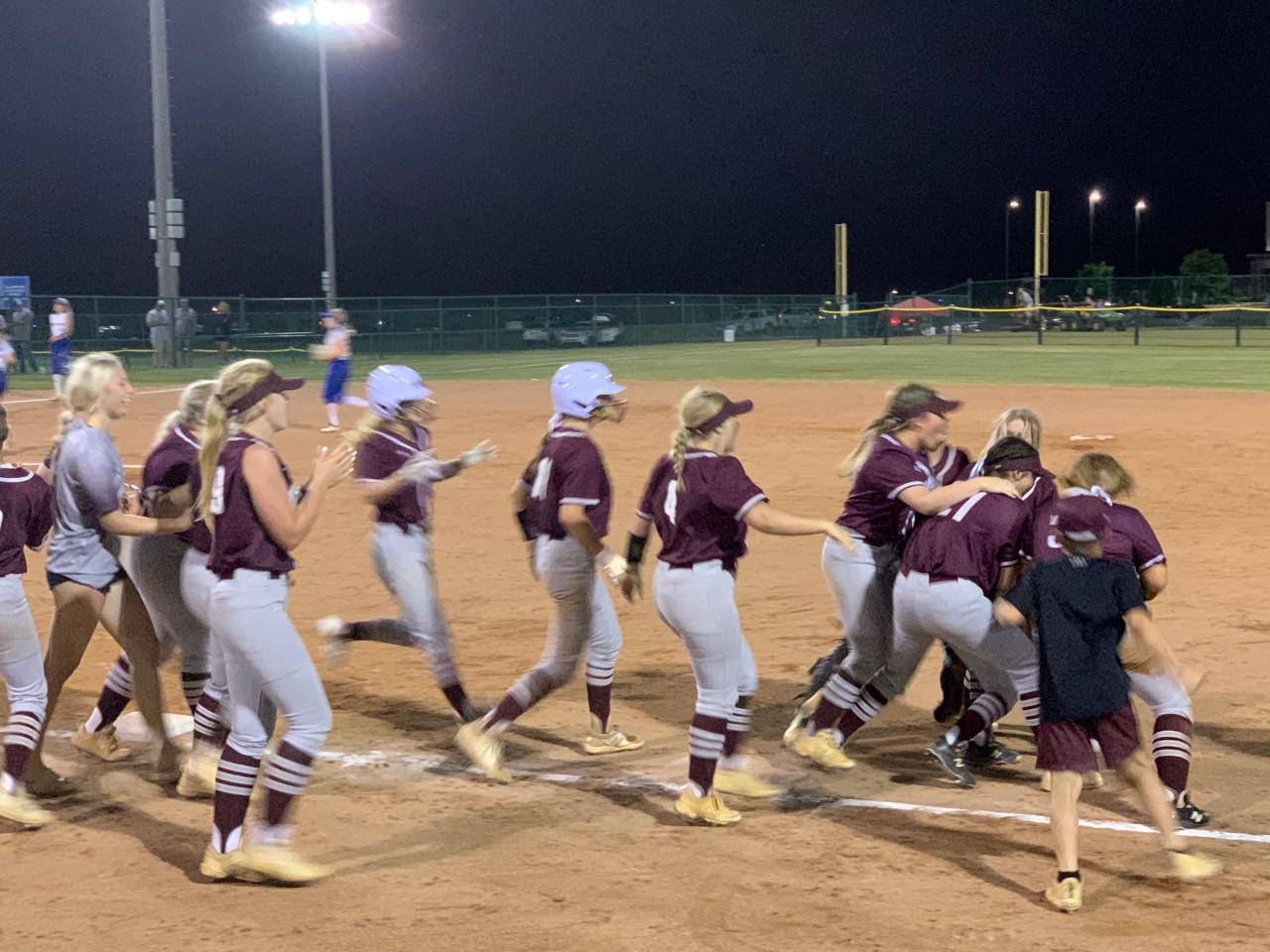 Alcoa players celebrate with Trinity Hodge, as the freshman drives in the game winning run for a 4-3 win over Riverside in the state tournament in Murfreesboro Tuesday night. Photo by Brian Hamilton

“Trinity had a great at bat earlier in the day when I sent the runner to try to score earlier,” Alcoa coach Sarah Fekete Bailey said. “She’s been seeing the ball really well and she’s been in our flex position, and she had a great at bat. Sometimes the ball bounces your way and today it was ours.”

Riverside took an early 1-0 lead in the top of the first inning when Melaina Tucker bunted and reached first base on an error by Alcoa shortstop Italia Kyle, which allowed Jayla Davenport to score.

The Lady Tornadoes would tie the game at 1-1 in the bottom of the second, as Adrianna King doubled on a fly ball to left field, scoring Dylan Jablonski.

Alcoa would take the lead in the bottom of the 4th inning when King hit a line drive double to center field, allowing Jablonski to score for a 2-1 advantage.

The Lady Panthers would regain the lead in the top of the 6th when Molli Deere hit a home run to score two runs, as Tucker also scored to put Riverside ahead 3-2.

Kara Pitts would come through in the clutch, however, in the bottom of the 6th inning, as the freshman hit a ground ball to left field. Pitts was able to advance to third base and then score on an error by left fielder Sydney Montgomery to tie the game at 3-3.

After a scoreless 7th inning, the two teams would go to extra innings, knotted at three apiece. Alcoa had an opportunity to score in the bottom of the 7th inning when Hannah Adams was thrown out at home on what would have been the game winning run. 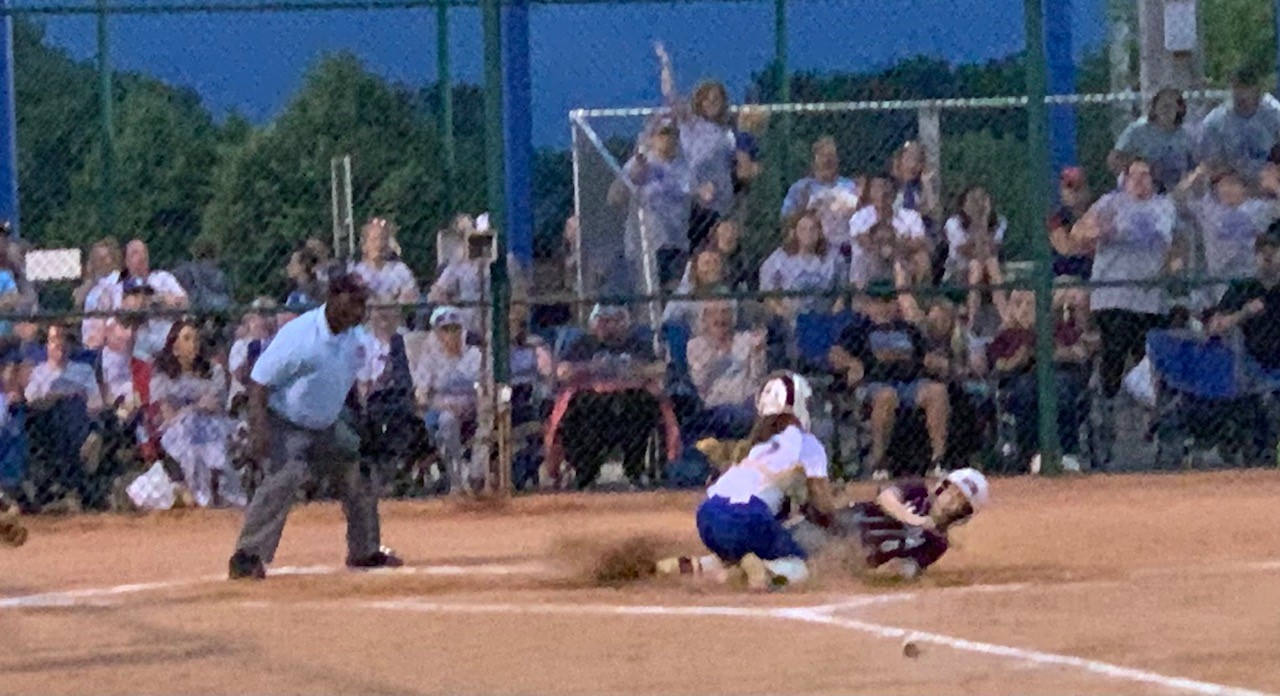 Alcoa’s Hannah Adams gets thrown out on the potential game-winning run in the bottom of the 7th before the game went to extra innings. Photo by Brian Hamilton

Hodge hit a line drive to first base and Lauren Ruehl had the ball slip out of her glove, allowing Pitts to score for the game winning run, as the Lady Tornadoes’ dugout celebrated jubilantly.

“I told our kids to do two things when we’re here at the tournament,” Fekete Bailey said. “I said, ‘I want you to have fun and I want you to compete.’ So, in the last inning I got them together and we huddled up and I said, ‘Guys, what did I ask you to do? Compete and have fun.’ I said, ‘Well, we’ve competed for eight innings, instead of going up and feeling pressure at the plate, I want you to go up and have fun.’ We had a lot of fun out there.”

Cassa Arnold picked up the win for Alcoa, allowing two hits and no runs over four innings. The senior pitcher struck out four and walked zero during the contest.

Gabby Burkhart started the game for the Lady Tornadoes, however, but was replaced by Arnold after the Deere home run. Burkhart surrendered three runs on six hits over five innings, while striking out five.

Alcoa finished the game with eight hits, as Adrianna King, Kara Pitts and Dylan Jablonski each recorded multiple hits for the Lady Tornadoes. King went 3-for-3 from the plate to lead Alcoa in hits. 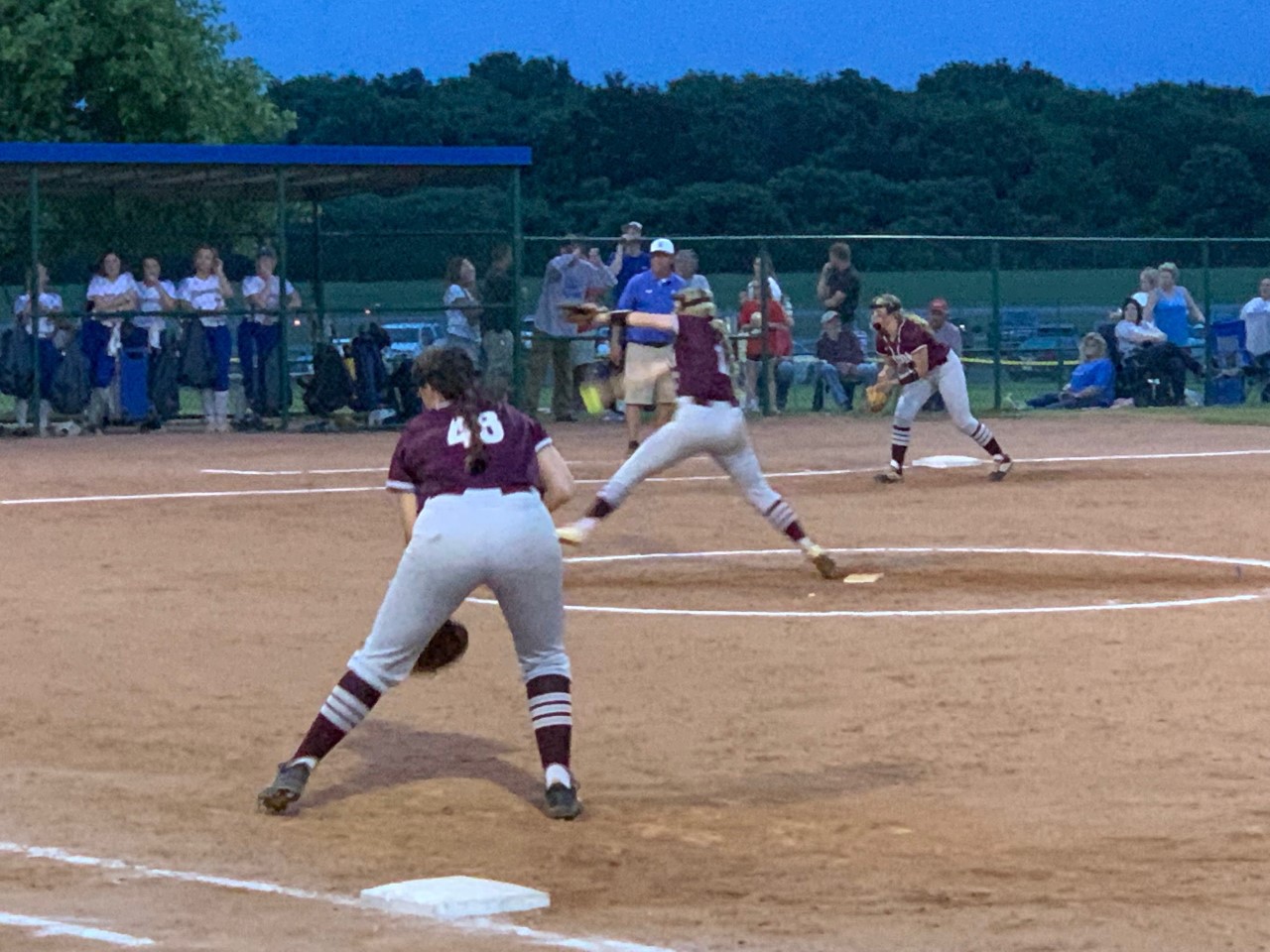 Alcoa’s Cassa Arnold tosses a pitch against Riverside in the 8th inning of the Lady Tornadoes’ 4-3 win. The senior pitcher allowed just two hits and no runs during four innings of action. Photo by Brian Hamilton

Molli Deere went 3-for-4 with a two-run home run to lead the Lady Panthers in hits.

This is the first time Alcoa (26-12) has advanced to the state tournament since 2019, when the Lady Tornadoes dropped their first two games to Creek Wood and Sequatchie County. This year’s seniors are the only Alcoa players to have experienced that state tournament, but Fekete Bailey doesn’t feel that the inexperience at state is an issue.

“A lot of our kids have played in big tournaments like this because they play competitive travel ball, so this is kind of like their second home,” Fekete Bailey said. “We start four freshmen and our older kids have really taken the freshmen under their wing and I’d say the thing that sets this team apart from any other team I’ve had is our team culture. We have a team culture of love. When you love somebody, you can say tough things to them and give them criticism and you can tell them when they need to pick it up and then when you need somebody to pick you up and that kind of dries out the anxiety.”