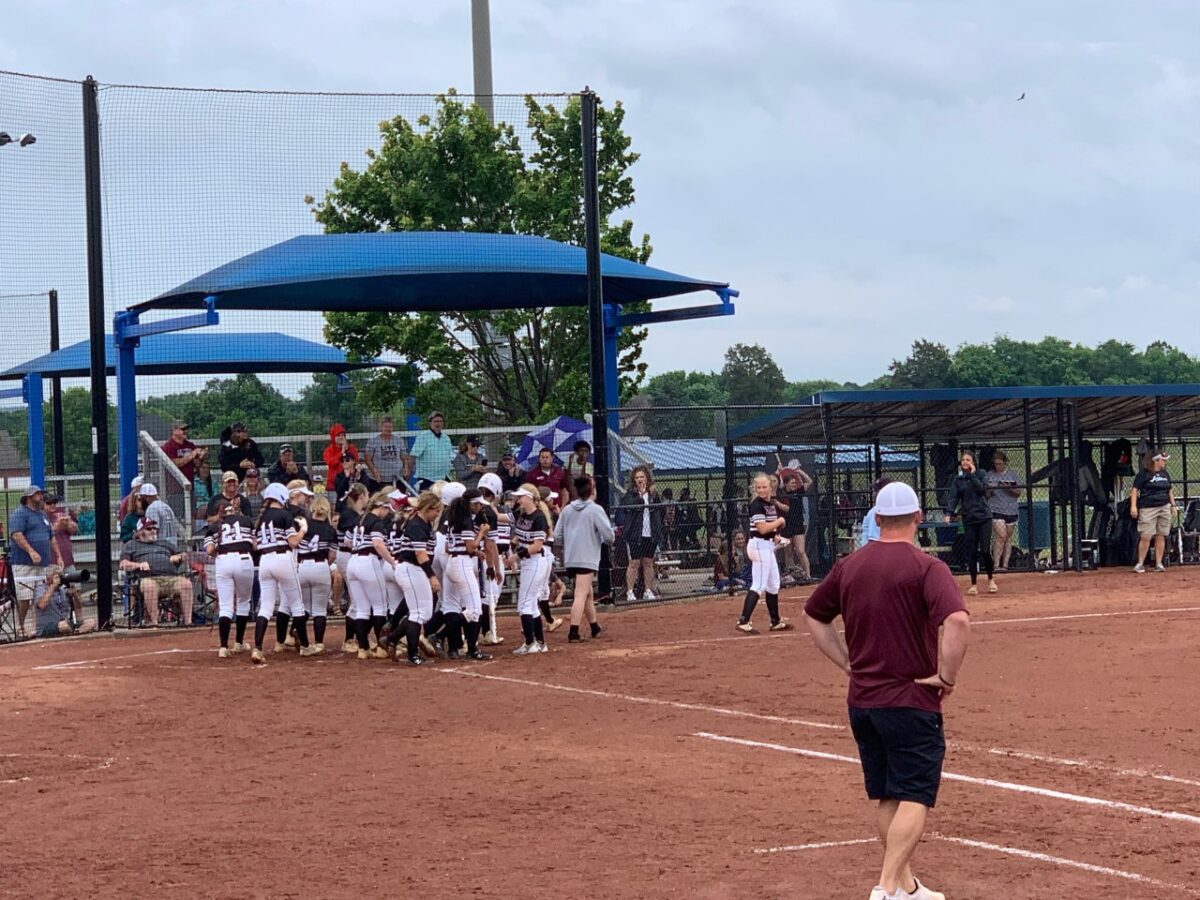 MURFREESBORO – Alcoa had never won a game in the state championships coming into this year’s tournament, but blink and the Lady Tornadoes have won two. Alcoa fought tooth and nail on Tuesday night to defeat Riverside in nine innings and then blanked Community after a two-hour rain delay for a 4-0 victory.

“I’m super proud of our kids,” Alcoa coach Sarah Fekete Bailey said after the game. “We started about an hour-and-a-half late and it was raining a lot and the field was not in the best playing conditions. I told the kids that both teams have to play on this field and what it’s going to come down to is each team’s effort. I thought our kids were focused and I thought they were intense, and I had a great feeling about that coming into this ball game. 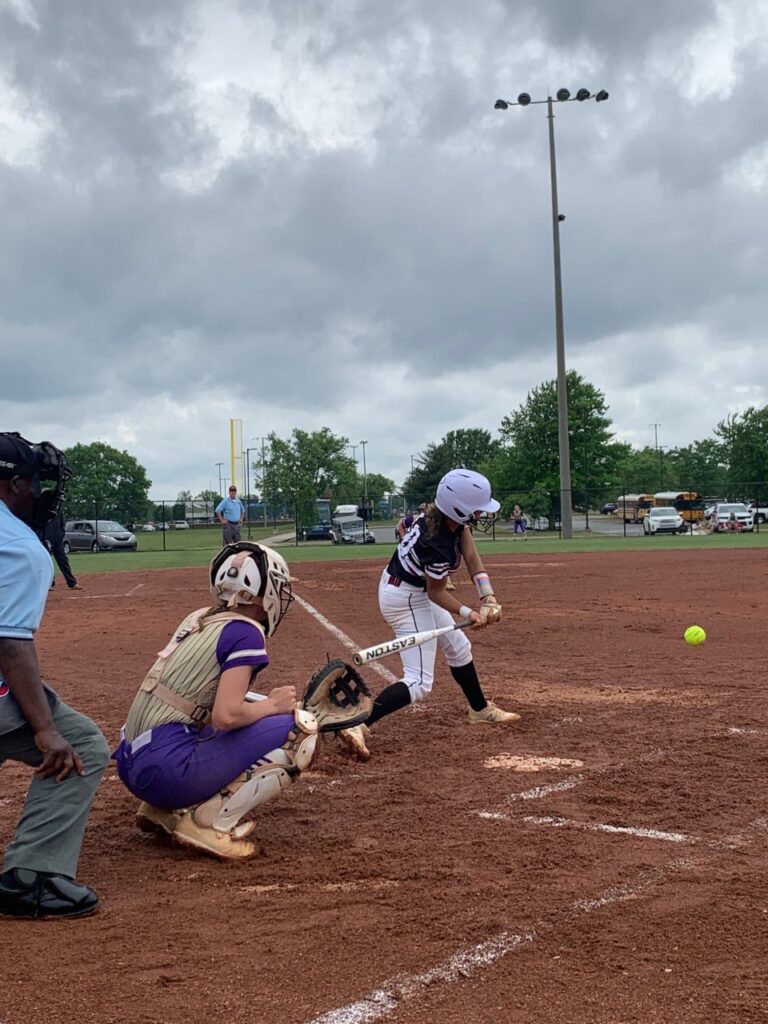 Alcoa’s India Kyle (10) swings at a Community pitch during the Lady Tornadoes’ 4-0 win on Wednesday afternoon. Photo by Brian Hamilton

Alcoa took an early 1-0 lead when Kara Pitts hit a pop fly and reached on an error, which scored Italia Kyle for a 1-0 lead in the top of the first inning.

The Lady Tornadoes held that 1-0 lead until the top of the third inning when Olivia Emert hit a solo home run to center field, giving Alcoa a 2-0 advantage.

“The wind was like whipping at about 30 miles-per-hour and blowing in and she went in and still hammered that ball,” Fekete Bailey said. “That was definitely a big sign and a big moment. You know when you come down here that it’s going to take more than one run to win a ball game.”

Kara Pitts bunted into a fielder’s choice to Community pitcher Taylar Wessener, which allowed for Kurstin Kinder to bring home a run and increase the Alcoa lead to 3-0.

The Lady Tornadoes brought in another run in the inning when Dylan Jablonski singled on a ground ball to second, which brought Pitts home for a 4-0 advantage.

Alcoa had the bases loaded twice in the 6th inning, but Community was able to find a way to get out of the inning without anymore damage.

Adrianna King was able to get the Lady Tornadoes out of the game with a fly ball to center field, followed by a couple ground outs, as Alcoa came away with a 4-0 win.

The win over Community gave the Lady Tornadoes’ their second state tournament win in school history, as Alcoa had never won a state tournament game before the thriller against Riverside on Tuesday night. 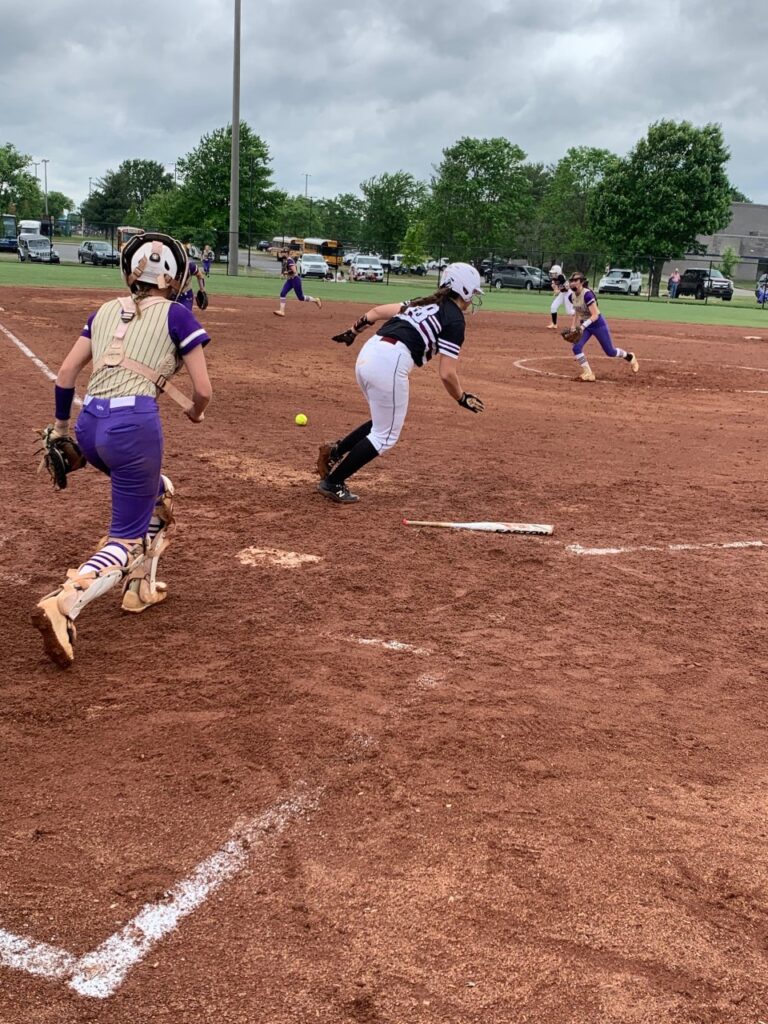 Alcoa’s Julia Halliburton (48) lays down a bunt during the Lady Tornadoes’ 4-0 win over Community. Photo by Brian Hamilton

King was the winning pitcher for Alcoa, going for all seven innings and allowing no runs on just two hits while striking out seven.

“I’m just so proud of them,” Fekete Bailey said. “One of the things that I think when we were here in 2019, that we didn’t have, that we have now, is that we have a pitching staff. When you get into a tournament atmosphere and when you are having to throw your pitcher — and you only have one — over and over, they’re going to get fatigued, especially when you play at 5:30 and turn around and play the next day. The luxury of having three go-to pitchers puts us in a great shape to make a run.”

Wessener ate the loss for Community, allowing four runs on seven hits over five innings and striking out two.

Olivia Emert and Dylan Jablonski each finished with multiple hits for Alcoa, as Emert went 4-for-4 with a home run to lead the Lady Tornadoes with hits.

“I think you only have to win two more to win it all,” Fekete Bailey said. “Knowing that and strategically planning it out how we are going to approach that as a coaching staff…we will have our kids ready to come out and be successful.”