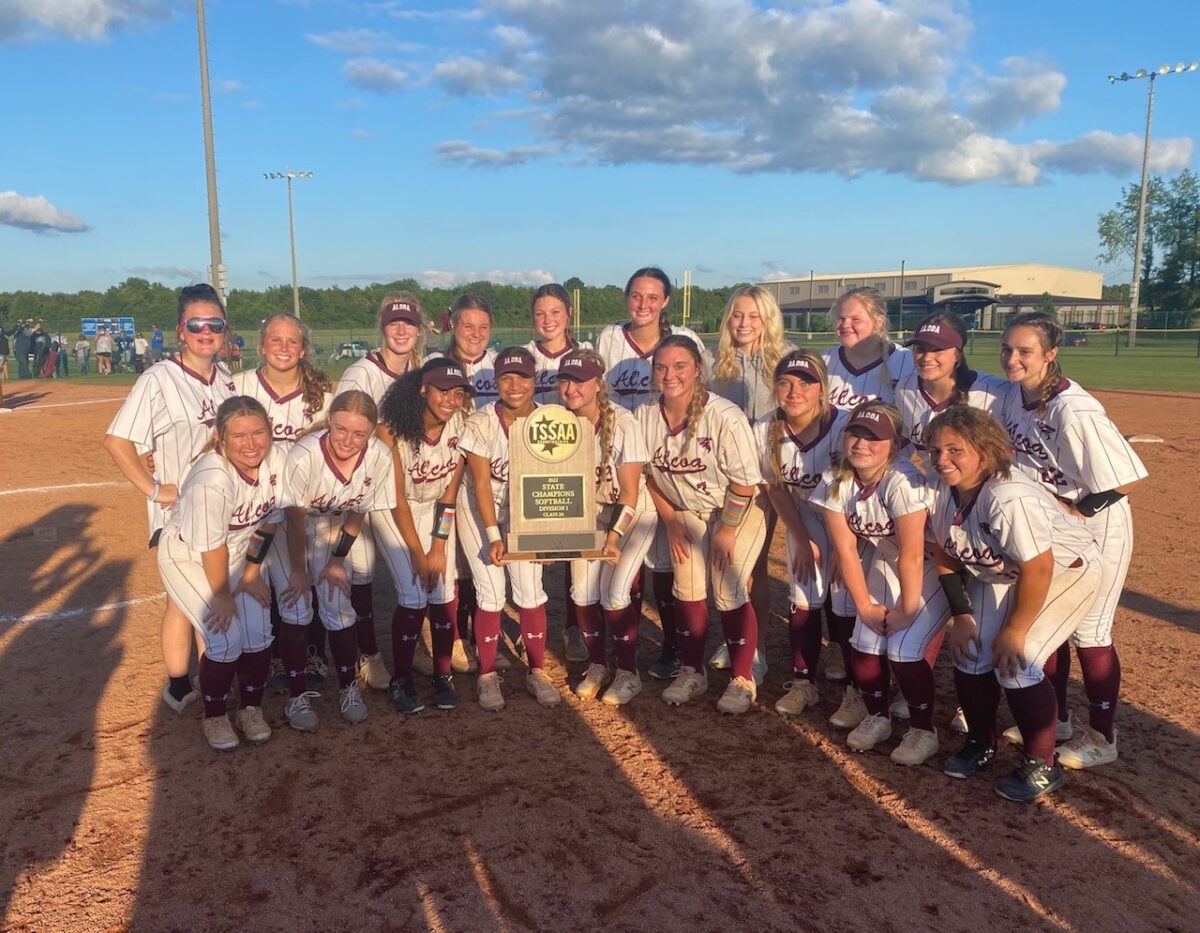 MURFREESBORO – Alcoa faced Forrest twice on Saturday, as rainstorms cancelled all games on Thursday, stretching most of the softball series into Saturday.

The Lady Tornadoes (29-13) lost to Forrest (30-12) in the 2:30 game 11-5, handing Alcoa its first and only setback of the state tournament, forcing a winner take all game at 6 p.m. The Lady Tornadoes would take an early lead in the championship game and came away with a 6-1 win and the school’s first state softball championship.

It was the third consecutive time that Alcoa and Forrest had faced one another, with the Lady Tornadoes completing a furious comeback on Friday for a 10-6 win. Forrest had to defeat Loretto 4-3 on Friday morning to earn another rematch with Alcoa in the championship round on Saturday afternoon.

This year they won four and went home with the hardware. 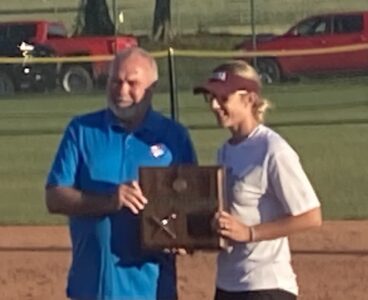 “I told them just to have fun and compete, but I said, ‘Bear with me, I’m going to add a third thing'” Fekete Bailey said. “The third thing is that I want you to win the last game. They came out and they did it.”

Each team was scoreless through the first two innings until Forrest’s Abby Ferguson hit a three-run home run to put the Lady Rockets ahead 3-0 in the top of the 3rd inning.

Alcoa’s Olivia Emert responded in the bottom of the third with a two-run homer over the right field wall to pull the Lady Tornadoes to within 3-2.

A single to center field by Dylan Jablonski would send Lauren Martin home to tie the game at 3-3 in the bottom of the fifth inning. Adrianna King would fly out on the next Alcoa at bat, sending both teams to the sixth inning, knotted at three runs apiece.

In the bottom of the sixth inning, Forrest’s Macyn Kirby hit a ground ball to third base and was able to reach first base on an error by Jablonski. Kirby advanced to second base on the same error, sending two runners home for a 5-3 Lady Rockets’ lead.

Christa Warren then doubled on a hard ground ball to left field, scoring two more for a 7-3 Forrest lead. Abby Ferguson then hit a ground ball and reached first base on an error by shortstop Italia Kyle, which allowed Warren to score. The Lady Rockets now led 8-3 in the top of the sixth inning with no outs.

Alcoa would get out of the inning rather quick after that, as a fielder’s choice and a double play by second baseman Kara Pitts ended the side, but the damage was already done.

Jaylyn Haliburton singled on a ground ball to center field, allowing Gabby Burkhart and Cassa Arnold to score, cutting the Forrest lead to 8-5.

The Lady Rockets added three more runs in the top of the 7th for an 11-5 lead. Alcoa was unable to mount a comeback in the bottom of the inning, as Jablonski, King and Burkhart all grounded out to give the Lady Tornadoes their first loss of the state tournament.

Emory Hall earned the win for Forrest, surrendering three runs on nine hits over five innings, while striking out one batter.

Adrianna King took the loss for Alcoa, allowing 13 hits and eight runs over seven innings, while striking out three.

Alcoa had 12 hits in the game, as Kara Pitts, Olivia Emert, Jaylyn Halliburton and Gabby Burkhart each finished with multiple hits, while Emert and Pitts led the Lady Tornadoes with three hits.

The two teams regrouped and would face off again after a 30-minute break, with momentum on the Lady Rockets side.

Both Alcoa and Forrest battled to a stalemate through four innings in the deciding game. The Lady Tornadoes would get on the board in the top of the 5th, however, as Olivia Emert doubled on a fly ball to center field, allowing Cassa Arnold and Italia Kyle to score for a 2-0 lead.

Forrest would pull to within 2-1 in the bottom of the fifth inning when Addison Bunty scored on a single.

Alcoa would add another run in the top of the 6th when Adrianna King flew out to right field with Kara Pitts tagging up at third base and coming home for a 3-1 lead.

The Lady Tornadoes added some run insurance in the bottom of the 7th inning, as Jaylyn Halliburton went deep to center for a three-run home run, as the Alcoa bench exploded with excitement. The homer scored Trinity Hodge, Lauren Martin and Halliburton for a 6-1 lead. 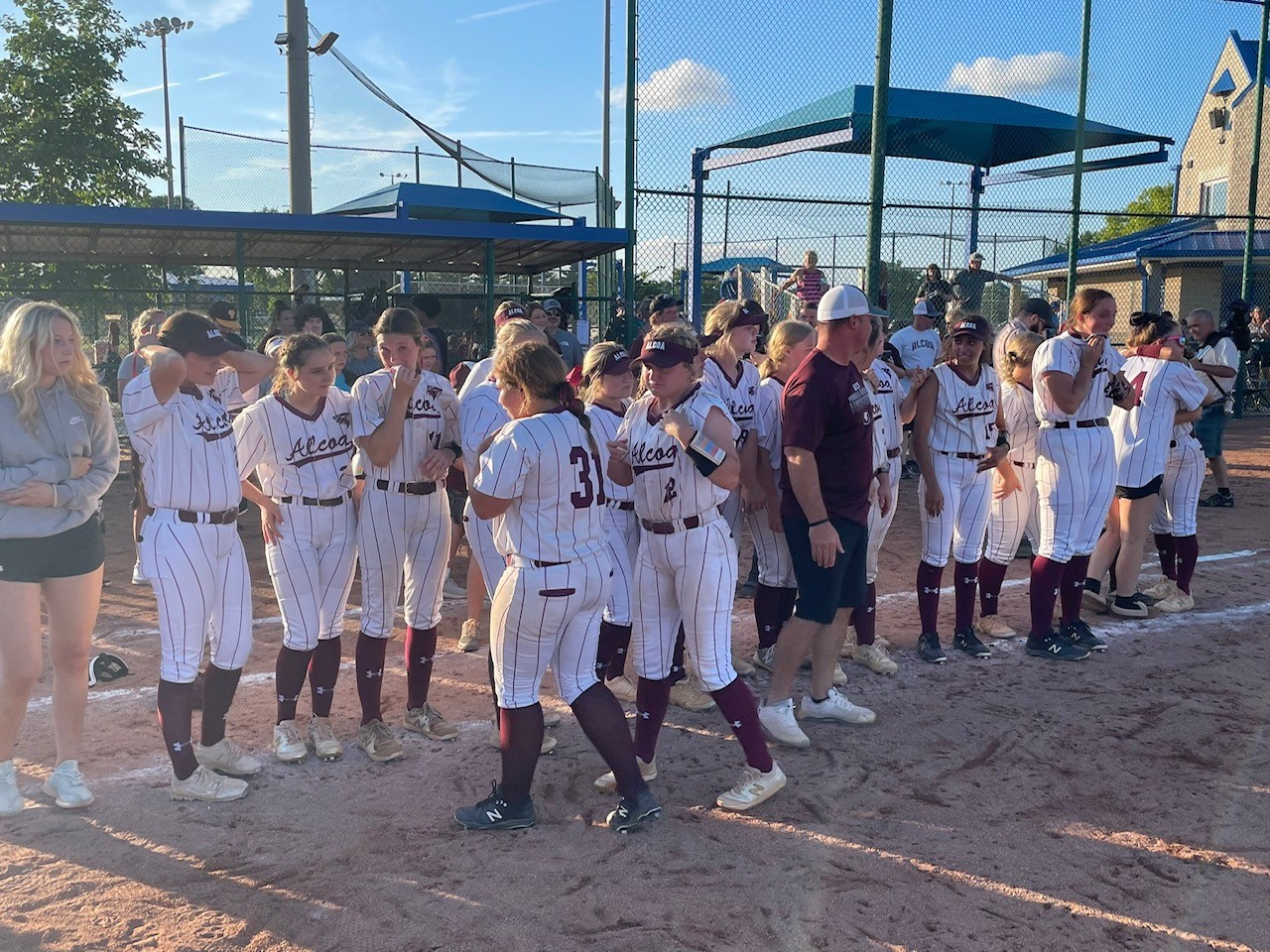 Alcoa players celebrate with both joy and emotion, as the Lady Tornadoes get ready to receive the school’s first ever softball championship trophy.

Gabby Burkhart got the first two outs rather quickly, as Abby Ferguson grounded out to third base and Leslie Bartoli popped a foul ball up, which was caught by Jablonski for the second out.

With runners on first and second base, Briley Burnham hit a pop fly to left field that was caught by Trinity Hodge, as the Alcoa dugout began to rush the field in jubilation with the Lady Tornadoes celebrating their first softball championship in school history.

While Fekete Bailey was a University of Tennessee softball standout and recently had her jersey retired at UT, she said Saturday may be her proudest moment in her softball career.

“Today is probably going to be one of my favorite days ever in softball because my kids are involved,” Fekete Bailey said. “To see them succeed and get everything they’ve worked for just makes it worth it.”

Olivia Emert led the Lady Tornadoes in hits, going 4-for-4 from the plate, while Halliburton finished the game with a home run and two RBIs.